Seeing in the dark: exposing the Moon's permanently shadowed craters

Extreme environments in space, as on Earth, hold intrigue for scientific exploration. One such location is in extremely cold craters near the Moon's north and south poles. Finding the possible locations of water in these regions is especially important for planning future manned and unmanned missions of exploration, since water could help sustain a lunar base.

In 2009 NASA launched the Lunar Reconnaissance Orbiter (LRO) robotic mission into a low-altitude polar orbit around the Moon to create exquisite maps of the lunar surface (see Figure 1).1 The LRO also intends to search for signs of water frost within certain craters near the Moon's north and south poles. Due to a fortuitous tilt of the lunar axis, direct rays of sunlight have not reached the bottoms of these craters for a billion years or more. The lack of sunlight makes these permanently shaded regions (PSRs) some of the coldest locations in the solar system, with temperatures at –213°C or less.1 Wayward water molecules bouncing across the lunar surface occasionally land in the PSRs and stick to the cold surface. Visually investigating these always-dark craters to learn the fate of the stuck particles has been difficult. Would the one-way flow of molecules into the PSRs slowly coat and build up layers of ice over the years?1–3 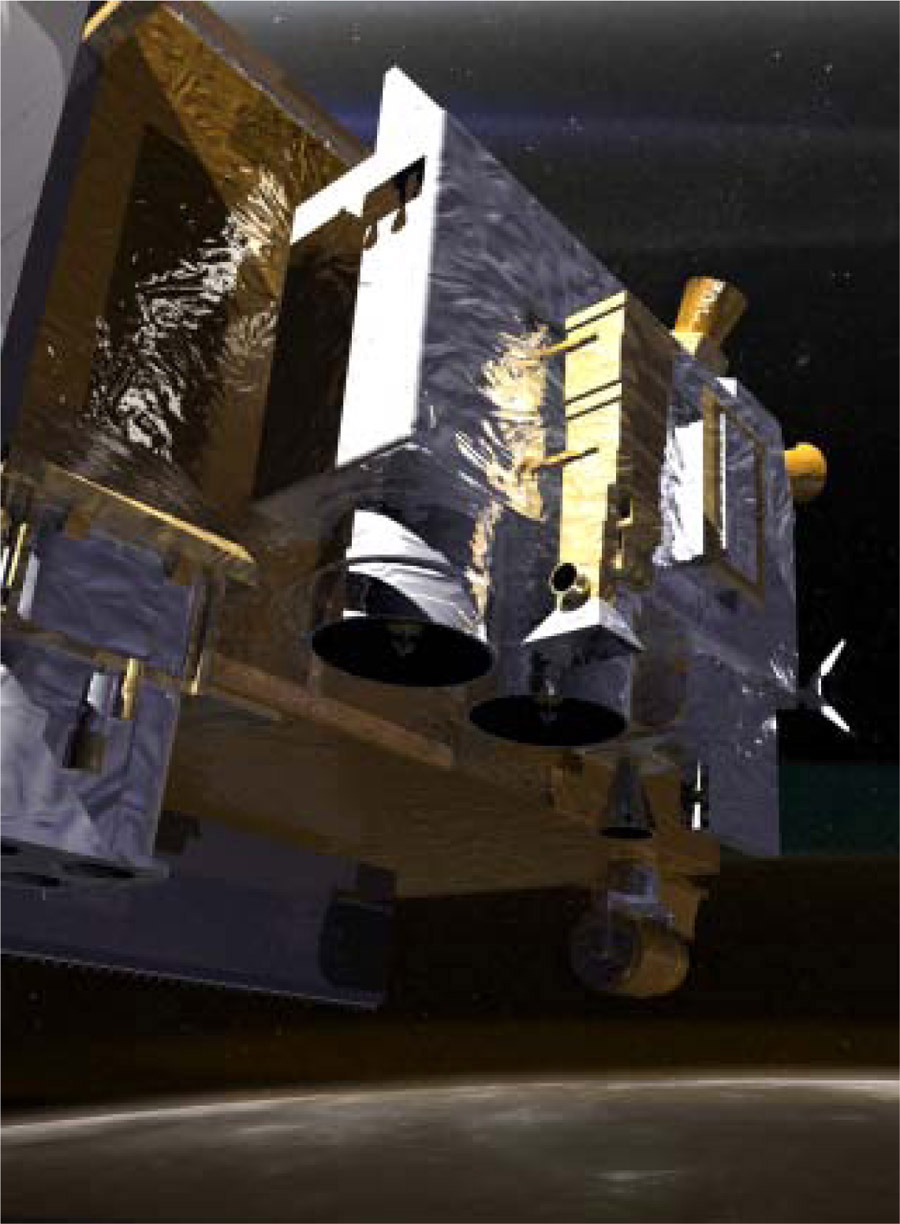 Figure 1. NASA's Lunar Reconnaissance Orbiter (LRO) mission launched for the Moon on 18 June 2009. Its payload of instruments is mapping the lunar surface with exquisite quality, and is finding more and more signs of water frost near the poles. (Reprinted with permission from NASA Goddard Space Flight Center.)

Together with its companion on the rocket, the Lunar Crater Observation and Sensing Satellite (LCROSS),4 LRO has had considerable success in finding what lurks in the soil of a few such shadowed craters.5 To dodge the difficulties imposed by a lack of sunlight for imaging PSRs, the LRO payload includes active sensing laser altimeter and radar instruments, a neutron detector that can detect ice buried up to 1m deep, a thermal radiometer, and a UV imaging spectrograph that employs a novel passive remote sensing technique. Called the Lyman Alpha Mapping Project (LAMP), this spectrograph is sensitive enough to measure starlight reflected from the PSRs at far-UV (FUV) wavelengths (100–196nm). The instrument also measures the much brighter reflected light at the Lyman-α wavelength of 121.6nm, which comes from sunlight scattered by interstellar hydrogen atoms streaming through the solar system. This Lyman-α sky-glow is diffuse, and would appear like a dim overcast sky if visible to us, so that shadows are nearly unimportant. LAMP is able to search for water signatures in the FUV reflection spectrum, since water has a strong absorption edge near ∼160nm. Water ice is dark shortward of ∼160nm, while it is highly reflective longward of this edge. Before LRO was launched, we estimated that we would be able to detect as little as a few percent water frost mixed in with PSR soils. 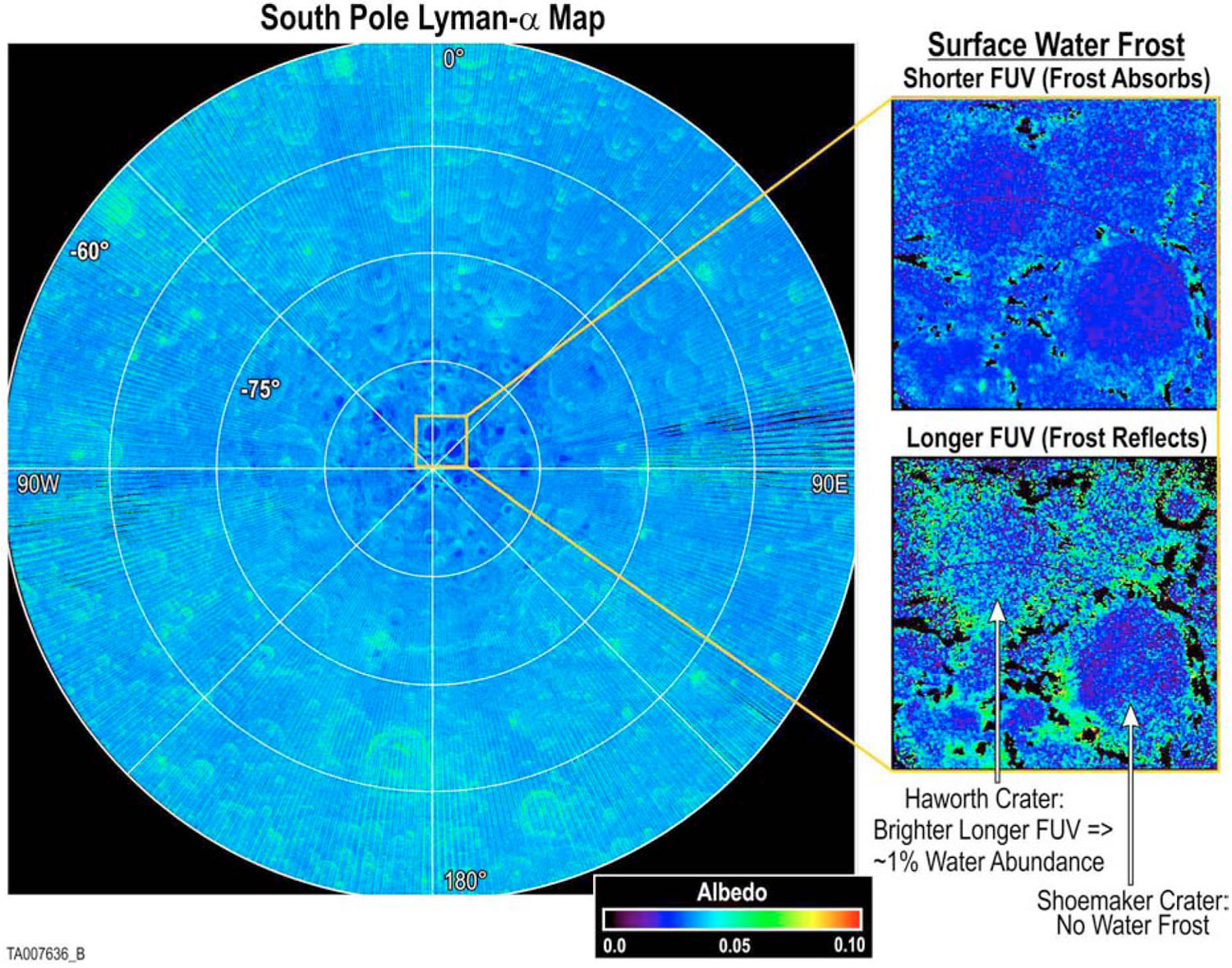 Figure 2. Images produced by the Lyman Alpha Mapping Project (LAMP) instrument aboard the LRO reveal features at the Moon's northern and southern poles in regions that lie in perpetual darkness. Many permanently shadowed regions are darker at far-UV (FUV) wavelengths (left and top inset) and redder than nearby surface areas that receive sunlight (bottom inset). The darker regions are consistent with having large surface porosities—indicating fluffy soils—while the reddening is consistent with the presence of water frost on the surface.

LAMP's field of view sweeps across the lunar surface like a push broom. Individual photons detected by the spectrograph are traced to their origin on the lunar surface, and gradually accumulated into brightness maps. We determine the FUV reflectivity of PSRs and other regions by dividing the observed brightnesses by our best estimate of the illumination.

Comparing the reflectivities within PSRs to their surrounding regions has revealed a few surprises.5 FUV reflectivities within the coldest craters are lower than their immediately surrounding regions, consistent with reflectance theories implying that their soils are more fluffy. Thus something is causing the soil grains in these exotic locations to be spaced farther apart. Comparisons of three UV colors show that a few PSRs are relatively more reflective at the longest FUV wavelengths (see Figure 2). These findings are consistent with a 1–2% surface abundance of water frost, based on the relative brightness of water ice compared to regular lunar soil.

For comparison, a 1–2% water abundance at the surface is comparable to the driest deserts on Earth. However, this seems remarkably soaked compared to the bone-dry view of the Moon we had just a few years ago. Infrared measurements of the lunar dayside surface reported in 2009 suggested ∼0.5% weight abundance of water near the north pole.6–8 Water was found to be abundant at the ∼5% level in the soil excavated by the LCROSS impact into Cabeus crater near the south pole.4 The frost abundances determined with LAMP are intermediate to these other data sets. The spectrograph probes the PSRs at the interesting interface between an ongoing supply of water on the dayside, and its entrapment, burial, and long-term storage within the shaded regions.

Surprisingly, some craters show no detectable signs of water, which runs counter to expectations from other data sets such as LRO neutron measurements.9 As the quality of LAMP's maps improves over time, we anticipate being able to distinguish frost features in smaller and smaller PSRs. The instrument's innovative technique could be applied to studies of Mercury's dark craters and other dimly illuminated regions across the solar system.

Kurt Retherford is a planetary scientist who specializes in UV spectroscopy and the study of atmospheres and surfaces of planets and their moons. He is the deputy principal investigator for the LRO-LAMP project.