Electrical signals in the brain govern the complex activity of the human body and the workings of our minds. Being able to switch and control such signals in neural cells grown in the lab is a fundamentally important tool, allowing study of sensory, motor, and behavioral events, all of which underlie our health.

Toward this end, the use of light to remotely control neural activity has been an attractive approach due to its non-invasiveness, the ability to generate light pulses of controlled duration (and, more generally, time course), and flexibility in probing distinct spatial locations. For example, channelrhodopsin-2, one of a class of membrane-signaling proteins known as ion channels, is naturally photosensitive and can be directly gated by light.1 Likewise, chemically modified ion channels, such as photoisomerizable azobenzene-regulated potassium channels, allow remote control of neuronal firing through the application of light.2 Most of these photosensitive proteins must be introduced to cells genetically, and some have slow temporal responses. Given these limitations, and the scope of the challenge of mimicking physiological activity in neural populations, it is important to explore other approaches.

One possible solution is to control cell signaling by modulating ion channel gating, using an alternative, highly sensitive optoelectronically activated nanostructure. Such a structure would enable optical control of endogenous (internal) ion channel activity, helping to repair a biological system that has deteriorated with minimum surgery. This solution would also provide an alternative to genetically introduced photosensitive proteins, taking the study and control of cell activities and signaling in a new direction.

Our research explores optical control of cellular and neural activity using optically excited quantum dots (QDs).3 This approach combines the advantage of semiconductors, namely, high sensitivity, fast response, and high design flexibility, with the advantage of photosensitive proteins, namely, small size and cell-specific targeting. Due to their 3D confined structure, QDs offer unique optoelectronic properties that outperform conventional semiconductor materials. These include spectrally sharper emission peaks under excitation, and higher quantum efficiency. The spectral response can easily be tuned by particle size and composition. Moreover their surface chemistry can be modified for selective attachment to biological particles (see Figure 1, inset). Coupled with their nanometer size, this has led to widespread use of QDs as fluorescent biolabels for targeted imaging. QDs are ideal transducers between cells and light: the QD works because it has an electric dipole moment that can be stimulated by light, and the dipole field can be used to activate a voltage-gated ion channel in the proximity of the QD. This enables the channel to open and allow the flow of ions across the cell membrane (see Figure 1). Different QDs can be targeted to different cell types by attaching them to antibodies that recognize proteins unique to the target cell.

We have verified the proposed approach using patch-clamp methods to test the ability of excited QDs to activate voltage-gated ion channels and modulate membrane potential. Patch-clamping allows measurements to be made with a micropipette electrode over a cell ‘patch’ comprising just a few ion channels. We illuminated the QD-cell system with exciting and non-exciting wavelengths, and recorded cell voltage and current changes. We used two approaches for integrating QDs with cells: culturing cells on the QD film, and using QD-coated probes to probe the cell. In both cases we monitored how QD excitation affects electrical signaling.

We chose prostate cancer (LnCap) cells as models for study due to their resilience, which was an advantage for culturing on cadmium telluride QD films (see Figure 2): cadmium is notable for its toxicity to cells. After successfully demonstrating cell membrane potential change during illumination, we switched to cultured neurons. For the experiments on QD films, cadmium selenide (CdSe) QDs from NN-Labs were drop-cast on an indium tin oxide substrate. Cortical neurons were then cultured on the QD films. Excitation of the QD films by 550nm wavelength light caused cell membranes to depolarize, evoking multiple action potentials (see Figure 3). The cell membrane potential goes to its initial resting potential (∼–60mV) after a delay during repolarization, before evoking another action potential. We attempted to stimulate cultured cortical neurons using glass micropipettes with 5–10μm diameter tips coated with CdSe QDs. This approach eliminated the need to culture cells on the QD film, allowing cells to be grown in their conventional environment. We observed membrane potential change on illumination with the excitation wavelength (λ=550nm), whereas for other wavelengths (e.g., λ=720nm) we observed no effect. 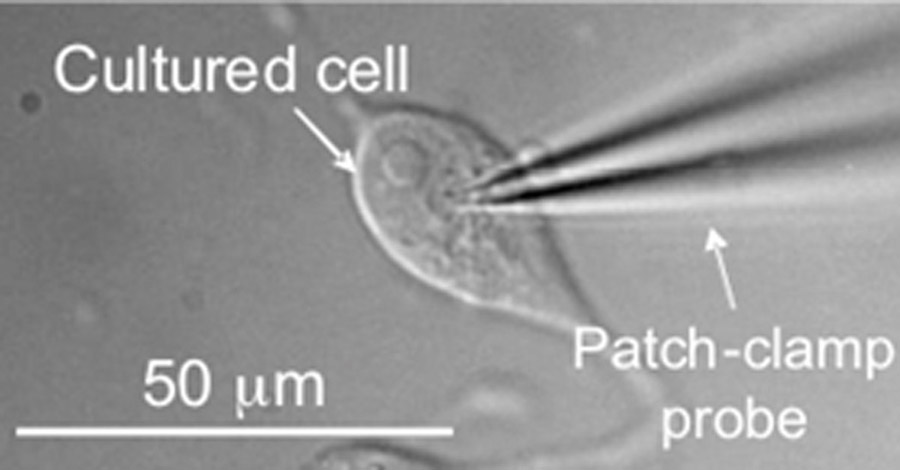 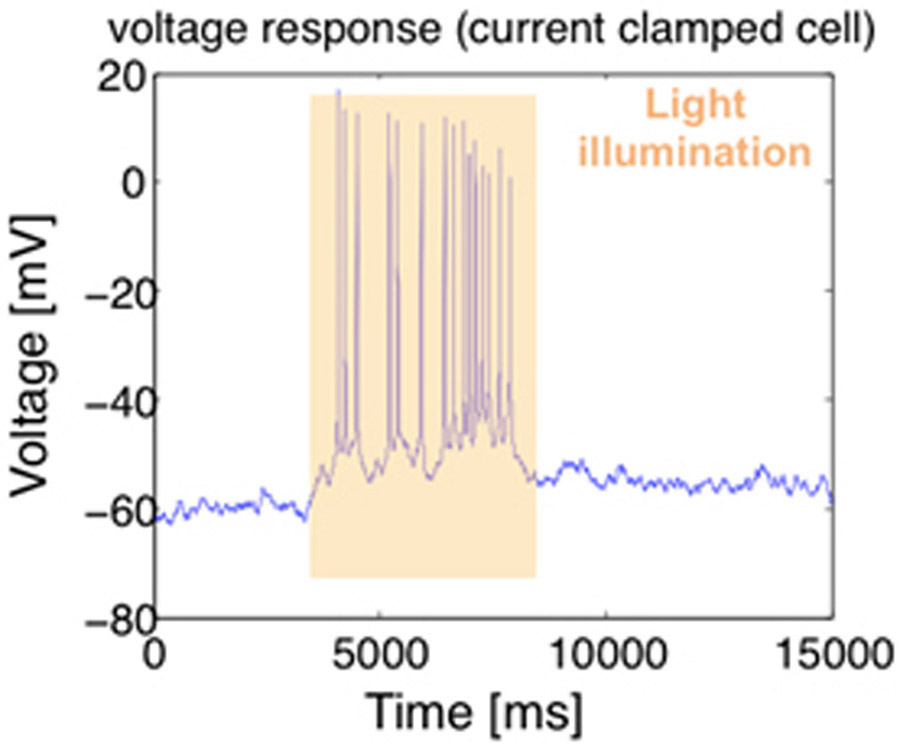 In summary, we have demonstrated activation of voltage-gated ion channels using optically excited QDs. The fields produced by the photogenerated dipoles from the QDs perturb the cell's membrane potential, generating action potentials that govern communication and signaling among neurons. This non-invasive method for switching cell activity allows targeting of specific cells by changing the QD surface chemistry, promoting interaction with cell-specific proteins. Currently, we observe quite a variance in experimental results, with some cells depolarizing and producing action potentials and others hyperpolarizing. Generally, the health of neurons that were in direct contact with the QD film appeared compromised due to the toxicity of cadmium, which may contribute to variability in the response to QD stimulation. This can be alleviated using non-toxic QDs, which is one of the next steps for this technology.

I would like to thank Fred Rieke of the University of Washington's Department of Physiology and Biophysics, former student Xiaoyu Miao, and my current student Katherine Lugo for their important contributions to this research.