Biomaterials have many advantages for use in organic, carbon-based electronics and have garnered considerable attention in recent years. Not only are they biodegradable and biocompatible, but they also tend to be environmentally friendly and do not require chemical synthesis. They have the potential to cut the cost of organic electronics and to simplify manufacturing processes. Biomaterials are already used as semiconductors, dielectrics, and substrates in bio-organic field-effect transistors (BiOFETs).1–3 However, the materials are not always easy to handle and can require many extraction steps.

Egg white, or albumen, appears to be an ideal material for organic electronics, as it is easy to process, readily accessible, and low cost. Heat transforms albumen from a soluble liquid to an insoluble solid as its proteins undergo thermal irreversible denaturation, unfolding from linear chains to form networks. These networks are held together by interactions between amino acids on different protein chains. For example, the thiol functional groups (containing sulfur and hydrogen) of cysteine amino acids in different protein chains form disulfide bonds (see Figure 1). 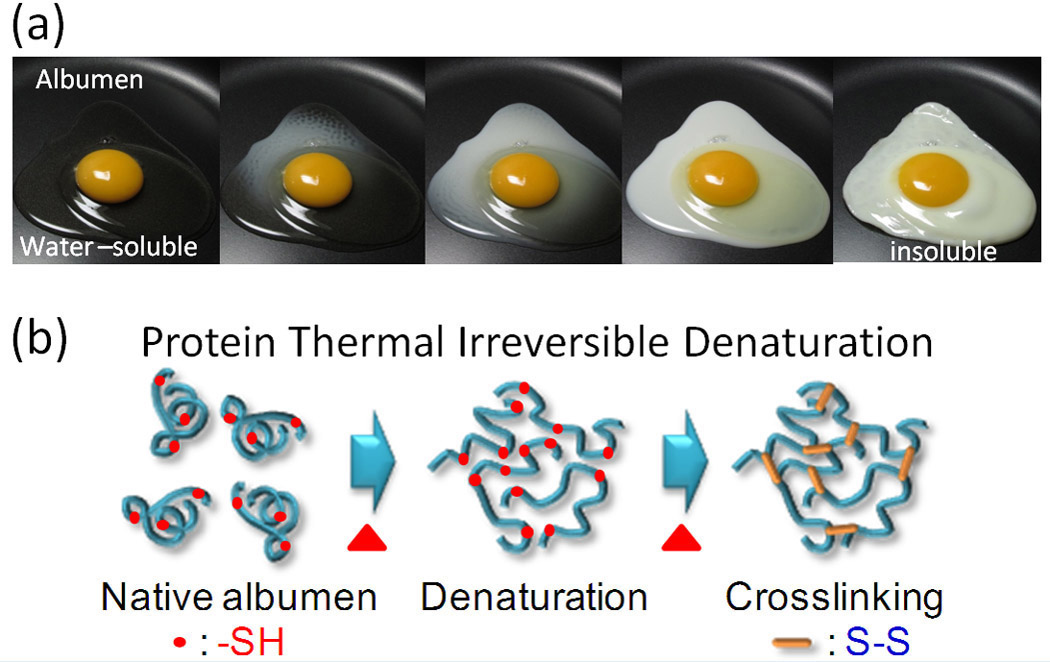 Figure 1. (a) On heating, chicken albumen is denaturized and becomes insoluble. (b) The schematic drawing shows the denaturation of albumen protein and the cross-linking that occurs as bonds form between sulfur (S) atoms. 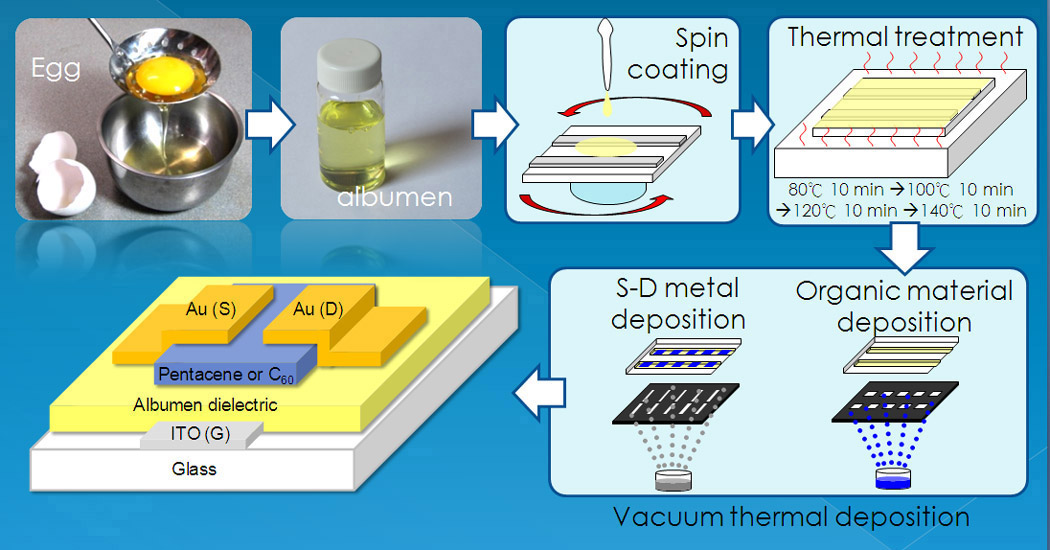 Albumen's dielectric constant is higher than that of most polymers used in OFETs, making it a potential insulating material. We have developed a simple, low-cost fabrication process to make an albumen dielectric layer for OFETs.4 First, we separate the egg white and yolk using a mesh spoon. We then create a thin albumen film by spin-coating it onto a pre-patterned indium tin oxide substrate. To obtain a smooth and dense dielectric film, we heat the substrate gradually from 80 to 140°C. In a vacuum chamber we then add a layer of organic materials and deposit a metal layer through shadow masks (see Figure 2). 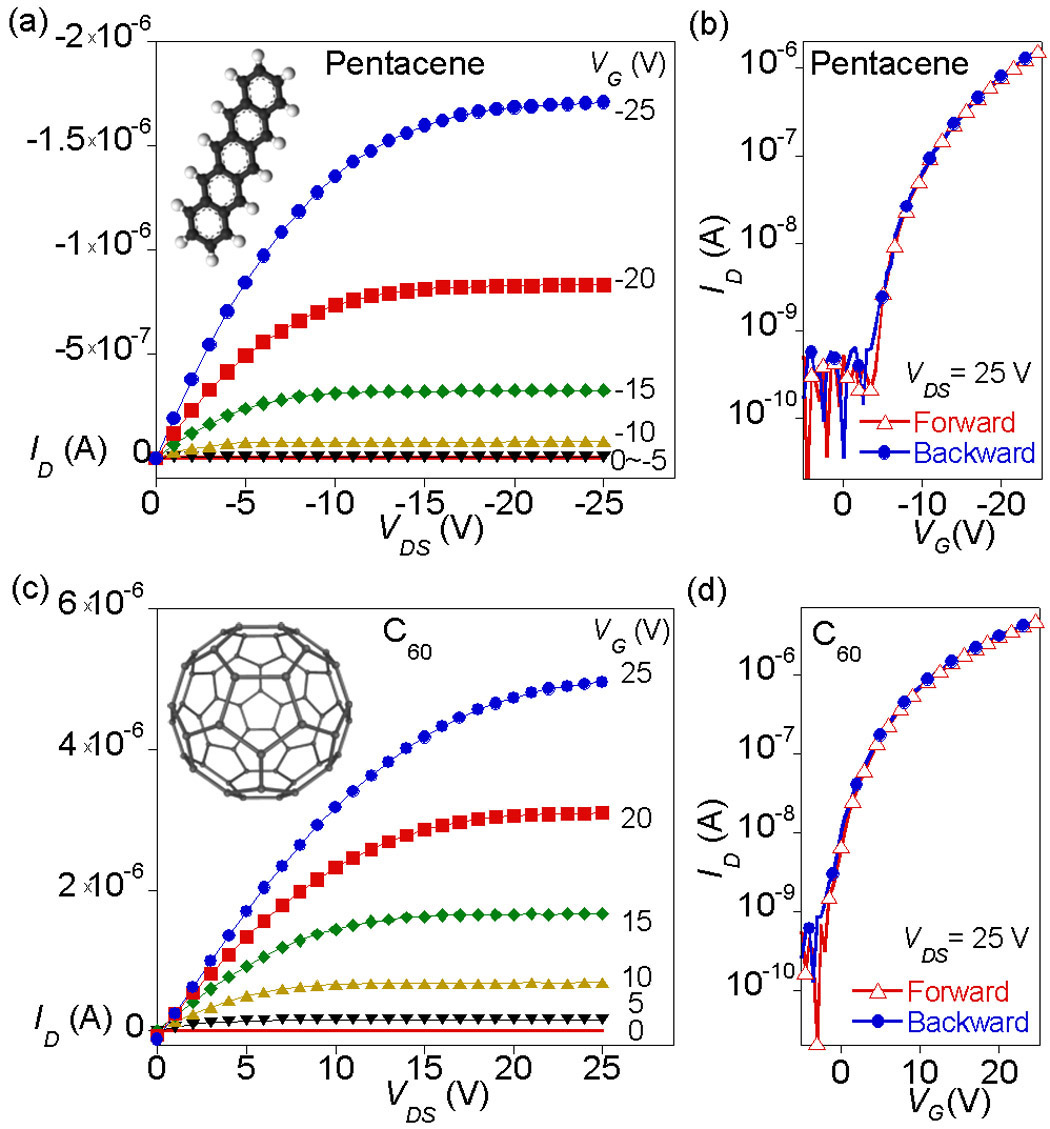 We made both n-type and p-type OFETs using pentacene and C60, respectively, as the organic layer and found albumen to be an excellent dielectric. Figure 3 shows the output and transfer characteristics of OFETs with albumen dielectrics. The output current of these OFETs reached 1.7–5×10−6 amperes and the gate leakage current was about 10−10 amperes, similar to that of common polymer dielectrics. The output currents of the pentacene and C60-based OFETs were almost double those of polymer dielectrics such as poly(methyl methacrylate).

Hysteresis, where the forward current differs from the backward current, is a significant concern in device applications and is deleterious to robust circuit design. It is often resolved using cross-linking approaches. In our studies, hysteresis was not detected in either the pentacene or the C60 OFETs: see Figure 3(b) and (d). These results are attributed to natural protein properties, hydrogen bond interchanges, and disulfide bond cross-linking in irreversible thermal denaturation without any additional cross-linking agents. 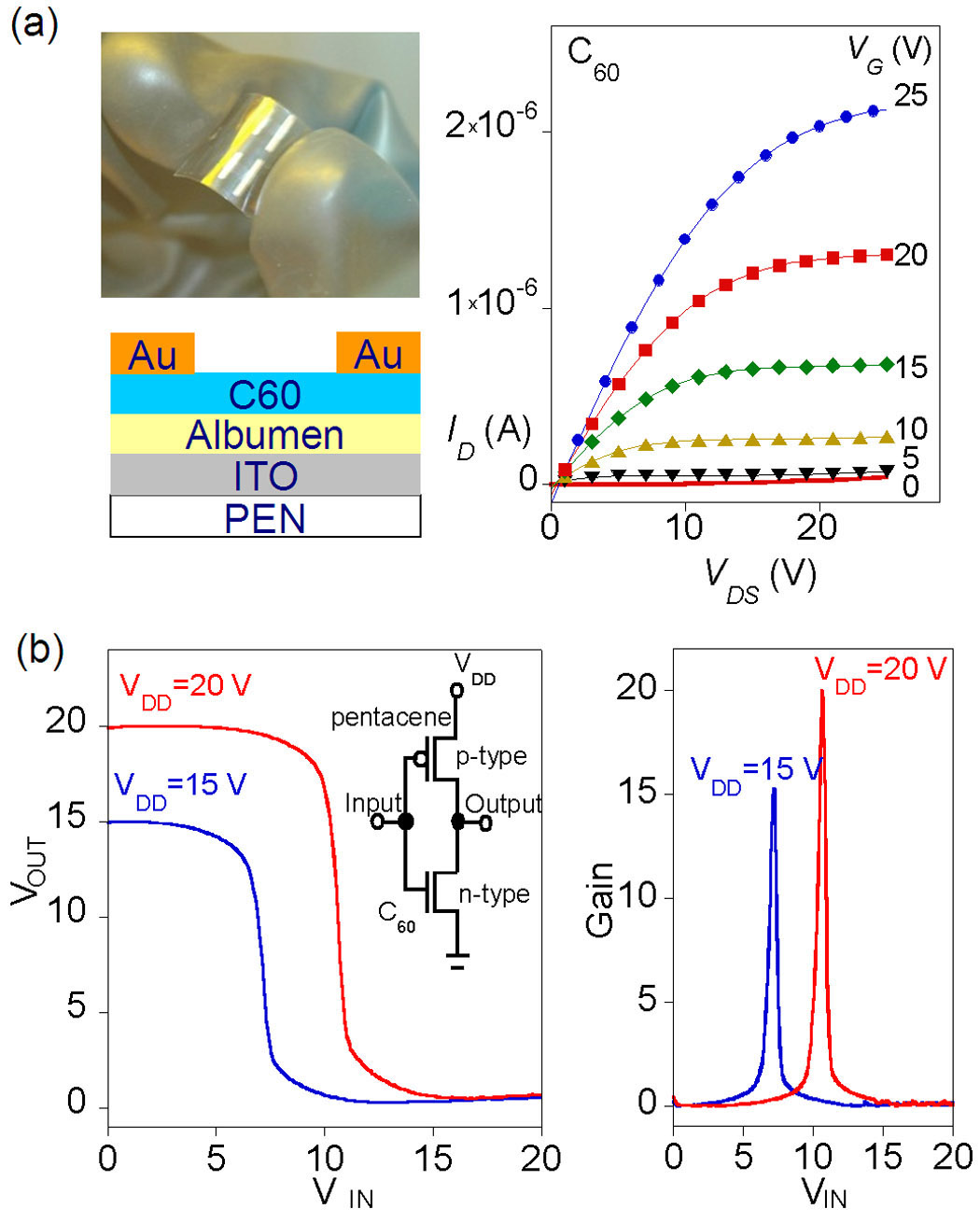 Albumen dielectrics are also suitable for fabricating flexible OFETs, which are lighter and more durable. Such devices have many more potential applications than those with glass substrates, particularly for portable electronics. For these we cast the albumen on ITO-patterned poly(ethylene naphthalate) (PEN) substrates (see Figure 4). The output characteristics of the flexible OFETs were similar to those of the devices fabricated on a rigid glass substrate. As shown in the photograph, the flexible OFETs can be easily bent. Doing so several times did not affect the output current.

In summary this work used a biomaterial, chicken albumen, as the gate dielectric in OFETs. The albumen does not need further extraction or purification and is more easily obtained, processed, and less expensive than other biomaterials for OFET devices. The entire process for preparing the albumen dielectric uses the properties of natural albumen without synthesis. This material presents promising functions in fabricating both p-type pentacene and n-type C60 OFETs. Moreover, our work suggests that albumen dielectrics work well in flexible OFETs and in complementary inverters. We are currently investigating the intrinsic properties of albumen as a dielectric, including stability, aging, and tolerance to temperature and moisture. We also anticipate that albumen dielectrics could have photopatternable properties, if photoinitiated additives are used to activate the denaturation of natural proteins.

The authors would like to thank the National Science Council of Taiwan (NSC99-2113-M-006-008-MY3), the Asian Office of Aerospace Research and Development (AOARD-10-4054), and the NCKU Landmark project for financially supporting this research.

Chong-Yu Huang is a graduate student. He received a BSc in physics from National Kaohsiung Normal University, Taiwan (2010).

Tzung-Da Tsai is a PhD candidate. He received a BSc in electronic engineering from Feng Chia University, Taiwan (2007), and an MSc in photonics from National Cheng Kung University (2009) .