Silicon photonics is a relatively recent research field1–4 that aims to substitute electrons with photons as the carriers of information in devices such as planar lightwave circuits. The technology marries the device electronic performance of traditional semiconductor materials with the speed and bandwidth offered by light. Although in the linear regime a silicon photonic circuit can efficiently guide, modulate, and detect IR light, in the nonlinear (i.e., ultrafast, ultrahigh capacity) regime the situation is more complex. In particular, nonlinear second-order optical phenomena (e.g., the electro-optic effect) are needed to generate, convert, and modulate light at the desired speeds inside complex networks of silicon wires.

Nonlinear silicon photonics has so far exploited the natural third-order optical nonlinearities—χ(3)—of silicon (e.g., optical-field-induced birefringence) for use in security, military, and biosensing applications. Consequently, substantial research effort has gone into enhancing these properties and to applying them to novel all-optical photonic devices.5

A few years ago, a second-order nonlinear optical susceptibility—χ(2)—was reported for a so-called Mach-Zehnder interferometer based on a strained silicon photonic band-gap waveguide.6 While χ(2) is prohibited by the centro-symmetry of the silicon crystal itself, being able to induce it in silicon would provide access to a wide range of nonlinear optical devices at power densities intrinsically lower than those allowed by mere third-order effects. Our recent contribution7 to this field has unambiguously shown, both theoretically and experimentally, that silicon can be efficiently stressed to become a good second-order nonlinear crystal.

We computed the second-order nonlinear optical response from strained bulk silicon ab initio using time-dependent density-functional theory.8 We broke the bulk silicon centro-symmetry by moving the silicon atoms in the lattice, that is, by modifying their bond lengths and angles. Finally, we obtained silicon models that enable us to calculate the second-order optical responses as a function of the induced strain (see Figure 1). 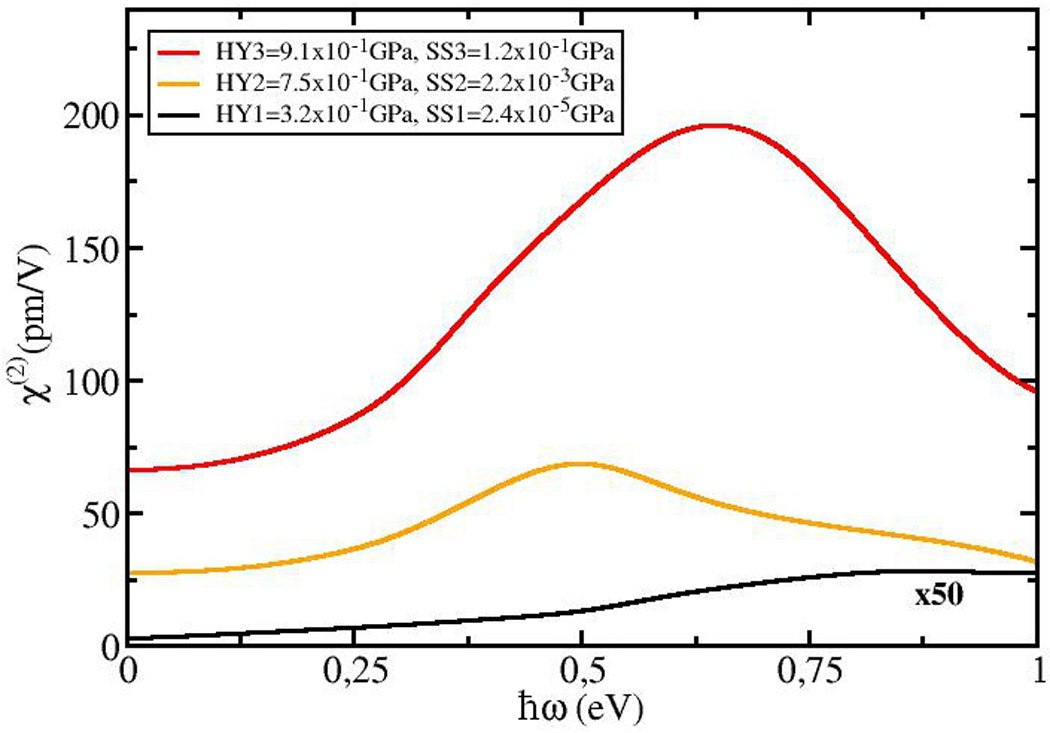 w: Energy of the pump photons.

The results of our simulations show that χ(2) is nonzero whenever the unit cell is inhomogeneously strained. In fact, as Figure 1 shows, the more distortion in the lattice, the greater the value of χ(2): the best situation we observed is when the stress is biaxial and the resulting strain has an inversion in sign across the structure. In other words, the amount of χ(2) is expected to be maximum, and thus the devices would work in the nonlinear regime at lower power.

Figure 2 illustrates the successful fabrication of high-quality strained silicon waveguides, where the stress field is generated by suitable deposition of silicon nitride (Si3N4) or SiNx overlayers. We obtained the bidimensional distribution of the stress-strain field over the waveguide facet through micro-Raman backscattering measurements, where the amount of Raman peak shift of a 514nm laser line was unambiguously related to the external stress field imposed on the waveguides. Significant amounts of stress field were registered, allowing us to investigate the second-order nonlinear optical properties of the devices using optical transmission measurements (see Figure 3, top).

Figure 2. The left panel is a top-view optical image of the sample where a few waveguides are observed as yellow lines. A scanning electron microscopy image of the input facet of the waveguide is also shown. The layers are false-colored as in the related schematics. h0: Height of the silicon waveguide. h1: Height of the silicon nitride (Si3N4) overlayer. w: Waveguide width. c-Si: Crystalline silicon. SiO2: Silicon dioxide. (Adapted from Cazzanelli et al.7) 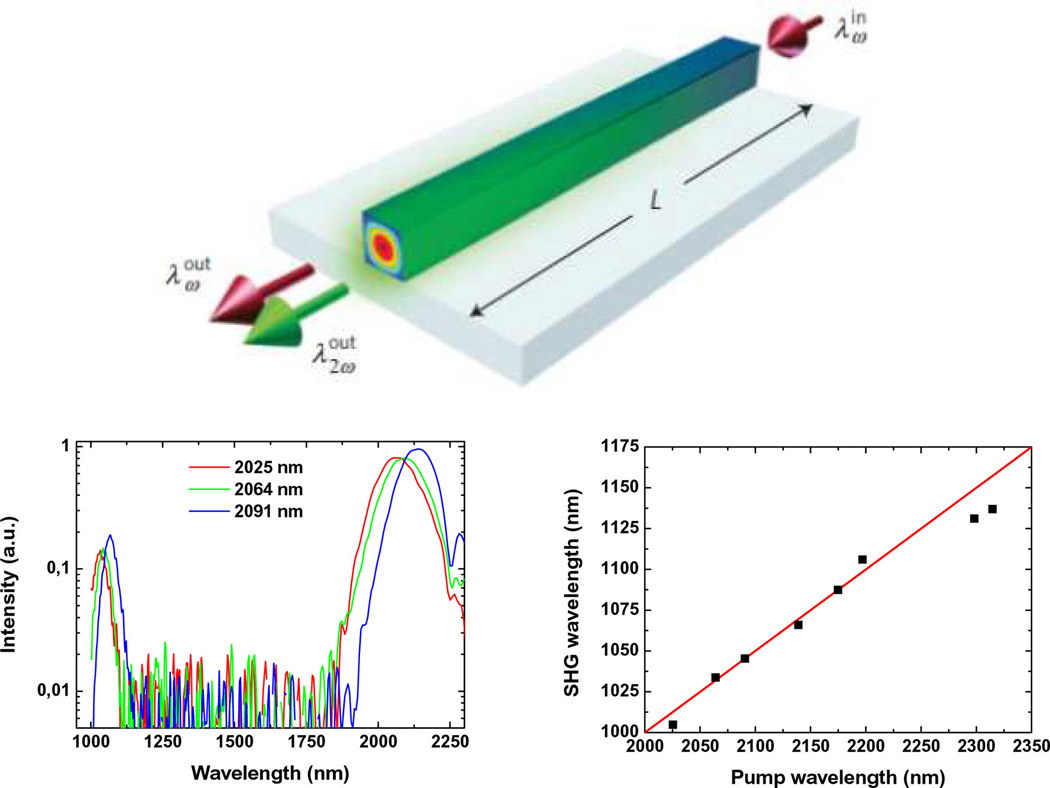 Figure 3. Top: Sketch of the second-harmonic generation (SHG) experiment. A pump pulse is coupled into the waveguide at wavelengths ∼2100–2250nm. Bottom left: An additional pulse at half-wavelength is observed at the output of the waveguide. Bottom right: The wide tunability property of the observed SHG signal. λ: Wavelength. a.u.: Arbitrary units. (Top panel adapted from Cazzanelli et al.7)

At the output of the samples, we observed a second-harmonic optical field that was clearly due to non-phase-matched quadratic wavelength conversion. As a consequence, the overall conversion efficiency was very low. Moreover, the generated second-harmonic amplitude was attenuated by two-photon absorption. Since, in this case, the second-harmonic signal is an oscillating function of the propagation distance, the estimated value of the nonlinear coefficient χ(2)=40pm/V is based on a worst-case efficiency scenario. The conversion efficiency could potentially be boosted through quasi-phase matching9 by periodically modulating the stress (and thus the nonlinear coefficient) or by resorting to phase-velocity matching between a fundamental mode and a high-order one carrying the second harmonic signal.

In summary, we have described the first observation of bulk second-order nonlinearity in silicon. This development could open many interesting possibilities in the field of single-pump-beam nonlinear optical down-conversion of near-IR light toward the mid- or far-IR spectral regions. Demonstration of these devices is still missing an essential ‘ingredient’: a suitable phase-matching mechanism that could boost by many orders of magnitude the efficiency of light conversion from the pump to the parametrically generated signal (i.e., one of two beams of different energies). The natural extension of this work will be for us to demonstrate optical parametric generation of mid-IR light beams starting from a near-IR pump propagating inside the strained-silicon waveguide.

Massimo Cazzanelli is a PhD technician at the University of Trento and works at the Nanoscience Laboratory directed by Lorenzo Pavesi. He has been active in the field of silicon photonics since 1996. He has authored more than 50 papers in international refereed journals and holds an H number of 19.

Federica Bianco received her MSc in physics at the University of Florence, Italy. Presently, she is a PhD candidate at the Nanoscience Laboratory. Her main research topic is the study of nonlinearities in engineered silicon for microsource development. Her other interests include micro-Raman spectroscopy and supercontinuum light sources.

Lorenzo Pavesi is professor of experimental physics and head of the Nanoscience Laboratory. He founded the research activity in semiconductor optoelectronics at the University of Trento. During recent years, he has concentrated on silicon-based photonics, where he looks for convergence between photonics and electronics. He is the author or co-author of more than 300 papers, author of several reviews, editor of more than 10 books and author of two, and holds six patents. He is an IEEE Photonics Society Distinguished Lecturer. He has an H number of 47.

Mher Ghulinyan is a researcher who mainly focuses on integrated silicon photonics and resonator optics. He is a member of Optical Society of America, author of one book, one book chapter, more than 50 research articles, and has made presentations at a variety of scientific meetings.

Georg Pucker is a senior researcher whose work includes the exploitation of silicon nanocrystals for applications in photonics and photovoltaics and the realization of photonic light-wave circuits based on silicon technology.

Daniele Modotto is an assistant professor. His main research interests include nonlinear phenomena in microstructured fibers, integrated optics, and plasmonics. He has published more than 80 papers in international journals and conference proceedings.

Stefan Wabnitz is a full professor. His current research activities involve nonlinear propagation effects in high-bit-rate optical communication systems and in all-optical information processing devices. He is the author or co-author of over 500 refereed papers and conference presentations.

Filippo M. Pigozzo is a research fellow. He conducts research on nonlinear interactions both in bulk materials and in waveguides. He is the author or co-author of more than 45 articles published in international scientific reviews, books, and proceedings of international conferences.

Stefano Ossicini is a full professor of physics at the University of Modena and Reggio Emilia. Formerly the dean of the Graduate School of Nano- and Physical Sciences, he currently directs the Research Center ‘End&Tech’. He is the author of more than 150 articles and several books.

Elena Degoli received her PhD in physics in 2001 and became a researcher at the University of Modena and Reggio Emilia in 2006. Her work mainly concerns the theory of low-dimensional systems. The results of her investigations have been acknowledged by two international young scientist awards.

Eleonora Luppi obtained her PhD from Modena University, Italy, with Stefano Ossicini. After postdoctoral research with Valérie Véniard at the École Polytechnique, France, she joined Martin Head-Gordon's group at the University of California, Berkeley, as a research assistant. Her research centers on ways of developing and applying electronic structures.

Valérie Véniard is a senior researcher at CNRS. She obtained her PhD at the University Pierre and Marie Curie, Paris, where she worked on interactions between atoms and intense laser fields. She subsequently moved to the École Polytechnique, where her research activities concern nonlinear optical processes in solids.