A solid solution of zinc sulfide in zinc oxide significantly increases the absorbance of light and results in a dramatic increase in the plateau current for a photoanode nanowire array.
06 February 2012
Hao Ming Chen, Ru-Shi Liu and Din Ping Tsai

Increasing global consumption of energy coupled with environmental concerns demand new energy resources and conversion pathways to replace the burning of fossil fuels. An attractive way to produce clean energy is to use solar energy to split water and obtain hydrogen.1 Many investigations have been conducted to develop photocatalytic materials or photoelectrochemical cells for hydrogen generation.2, 3 One innovative study used titanium dioxide (TiO2) in the photo-electrochemical splitting of water, and numerous attempts have been made to construct suitable metal and semiconductor nanostructural devices. However, metal oxide photoelectrodes with wide band gaps, such as zinc oxide (ZnO) and TiO2, are severely limited in their usefulness for water-splitting photoelectrochemical cells because of their poor absorption of visible light.

Several materials with strong absorbance in the visible region of sunlight, such as quantum dots (QDs) and organic dyes, can act as sensitizers to ZnO and TiO2 and raise total conversion efficiency. However, until now little work has been done on solid solutions as photocatalytic materials and sensitizers in photoelectrochemical devices. The large differences in electronegativity and size of sulfur and oxygen atoms mean that a solid solution of zinc sulfide (ZnS) in ZnO is expected to modify the oxide's electrical and optical properties.4 We have used a novel sensitization approach of a ZnO-ZnS solid solution on a ZnO nanowire array to generate hydrogen with considerably enhanced photocurrent.5 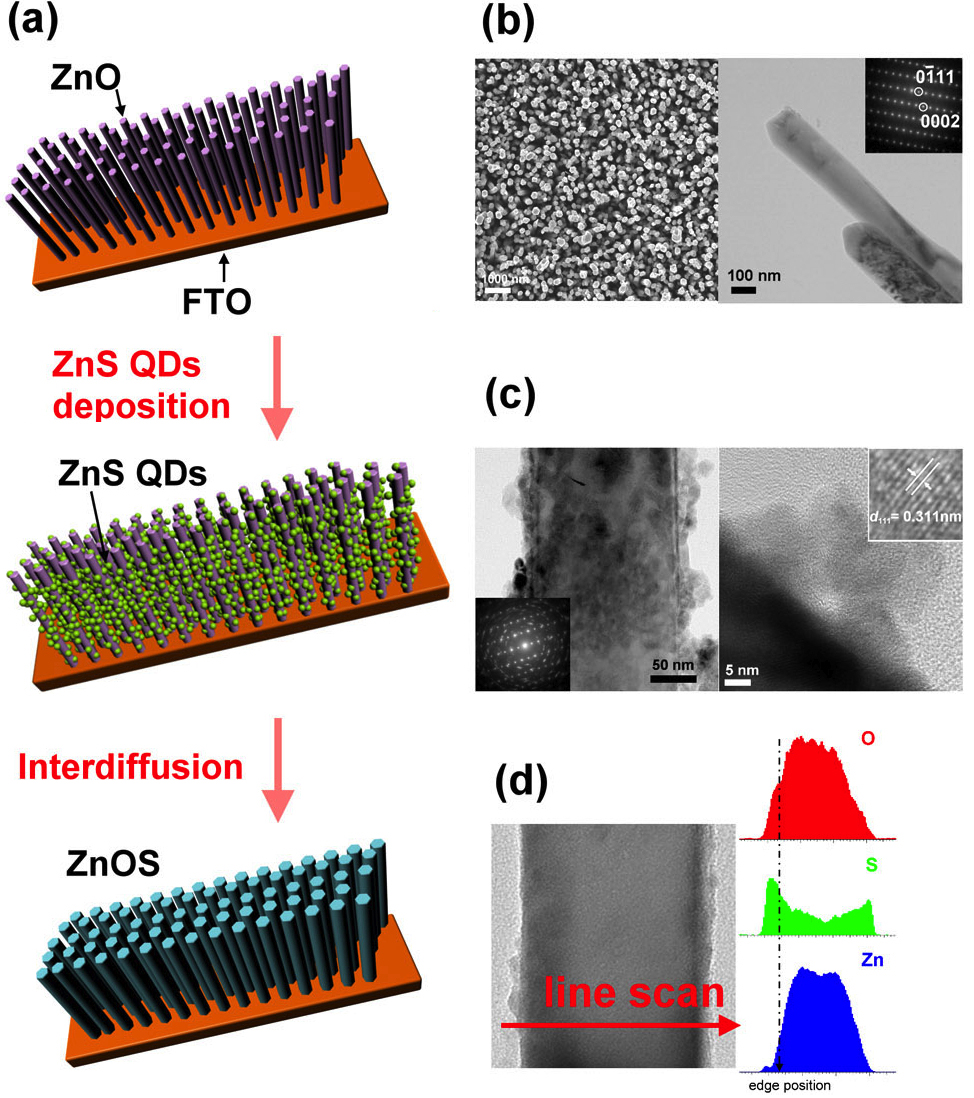 We first synthesized a ZnO nanowire array over the entire surface of a fluorine-doped tin oxide (FTO) glass substrate using the hydrothermal method. Next, we deposited ZnS QDs onto the ZnO nanowire array in a chemical bath. Finally, thermal treatment resulted in a ZnO-ZnS solid solution: see Figure 1a for a schematic of the method.

We used scanning electron microscopy (SEM) and transmission electron microscopy (TEM) to characterize further specific nanostructures of a set of samples. SEM revealed the growth of dense and vertically aligned ZnO nanowires on an FTO substrate, with a typical diameter of ∼150nm, and TEM demonstrated that the nanowires have uniform diameter: see Figure 1b. The corresponding selected-area electron diffraction pattern is characteristic of ZnO single crystal wurtzite structures (see the inset spots pattern to Figure 1b). We covered individual ZnO nanowires with nanoparticle aggregates with diameters of about 10–30nm: see Figure 1c. High-resolution TEM shows the lattice spacing between the (111) planes is 0.311nm (see the inset to Figure 1c), which is also that of ZnS bulk cubic crystal. We obtained the spatial distribution of the compositional elements within the ZnO-ZnS solid solution nanowire scanning TEM energy-dispersive x-ray spectroscopy (STEM-EDX) line scans in the radial direction of the nanowires (indicated by the red arrow in Figure 1d). The spectrum verified that the nanowire comprised zinc, oxygen and sulfur. Most of the oxygen signals are confined in the cores of the nanowires, while the shell region yields a more intense sulfur signal. The compositional profile of oxygen exhibited a significant signal outside the edge position, indicating that inter-diffusion between sulfur and oxygen occurred upon the surface of nanowire. This observation verifies that a solid solution of ZnO-ZnS is formed on the surface of ZnO nanowires. 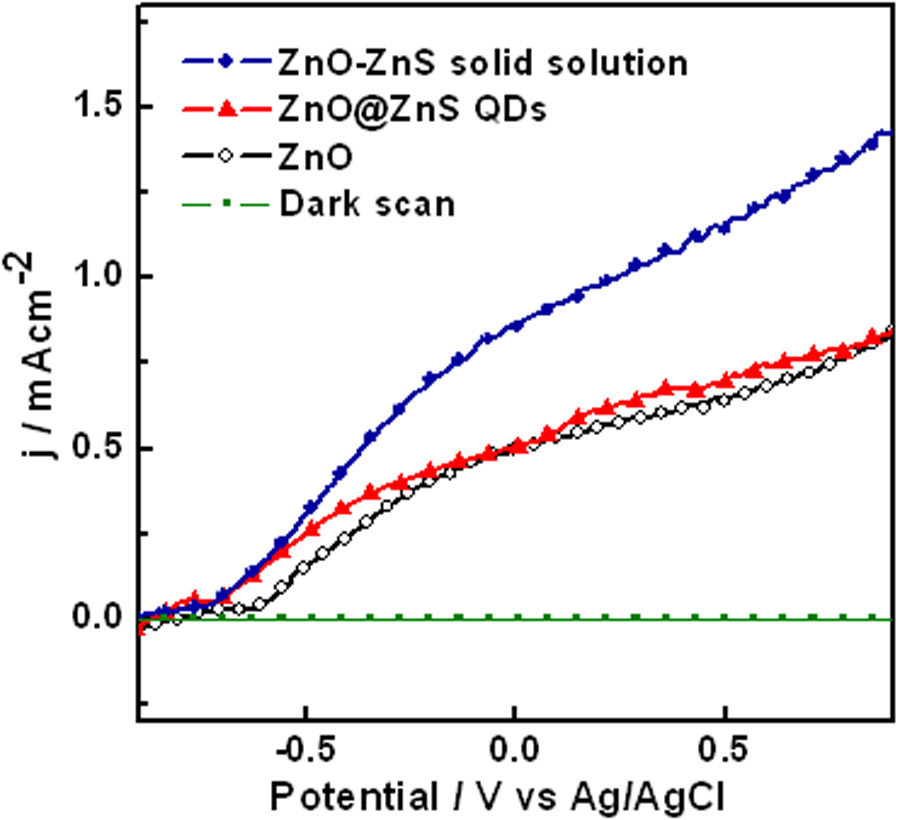 To obtain the photocurrent for the photoactivity under light illumination, we carried out photoelectrochemical (PEC) studies in a 0.5M sodium sulfide and potassium sulfate aqueous solution (pH=11). With this supporting electrolyte medium, the solutes operate as sacrificial reagents or hole scavengers,2 and the photogenerating holes react with the sacrificial reagents instead of water. This treatment can protect the photoelectrode from undesired photocorrosion and/or photodecomposition.

In summary, there is a need for better methods of splitting water to generate hydrogen as an energy source, but poor absorption of visible light by existing metal oxide photoelectrodes mean they are of limited use. We have demonstrated for the first time significant improvement in the ZnO-ZnS solid solution sensitization, which results in a dramatic increase in the plateau photocurrent, as well as a substantial shift in the onset potential. This solid solution structure can perform a better enhancement effect in photoactivity than traditional QD sensitization, and it also makes hydrogen generation possible. Although this investigation was concerned with the ZnO-ZnS system, we believe that this strategy can be extended to other solid solution systems. We are now trying to improve the system's conversion efficiency of sunlight by introducing other materials, such as plasmonic metamaterials and organic dyes.