In recent years, special attention has been paid to using solar energy to facilitate the photocatalytic production of hydrogen from water (photolysis of water), spurred by issues regarding the global environment and energy security. In fact, since the discovery of the Honda-Fujishima effect,1 in which a TiO2 (titanium oxide) semiconductor electrode splits water, the phenomenon has garnered constant study. One of the major limitations of the photoreaction is that activity is observed to be low, due to the high recombination rate of photogenerated electron-hole pairs. To improve efficiency, noble metals can be used to enhance the photoreaction.

Irradiation with light causes electrons in the TiO2 conduction band to migrate to the metal, leaving holes in the TiO2 valence band. Photogenerated electrons and holes are efficiently separated with noble metal particles serving as electron traps. Particles of noble metals such as gold and silver are interesting catalytic nanomaterials, with peculiar properties resulting from their small size, shape, and surface charge. The optical properties of gold nanoparticles (AuNPs) are dominated by surface plasmon resonance (SPR) effects, defined as the collective motions of the conduction electrons induced by light irradiation.2, 3 In our recent research,4,5 we have investigated the effect of SPR on photocatalysis by introducing gold nanoparticles onto TiO2 electrodes (see Figure 1). 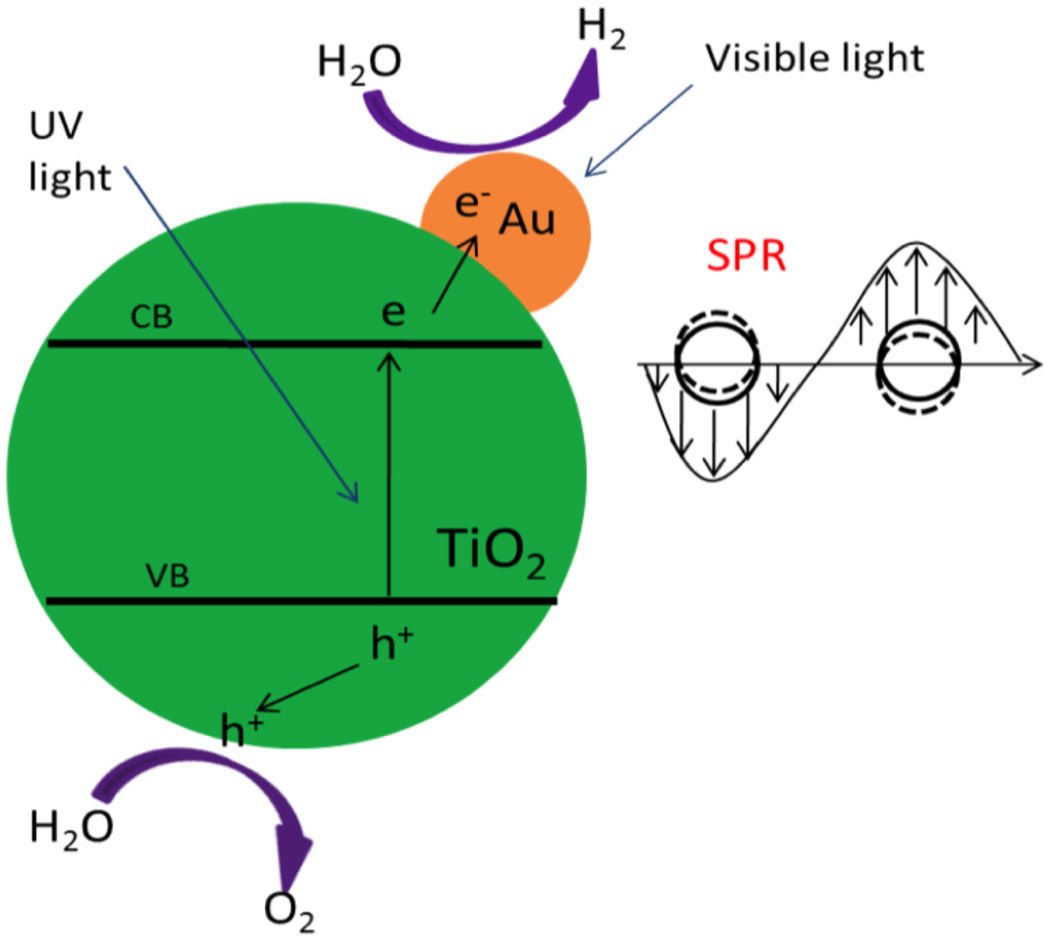 Figure 1. Electrons (e−) from the valence band (VB) are excited to the conduction band (CB) in titanium oxide (TiO2) by UV light irradiation. The electrons then migrate to the gold particles (Au) to facilitate hydrogen (H2) production, while holes (h+) left behind in the VB promote evolution of oxygen. The SPR (surface plasmon resonance) effect induced by irradiating gold nanoparticles (AuNPs) results in photocatalytic activity enhancement.

We prepared TiO2 with 3wt% of AuNPs using a photodeposition method previously described in the literature.6, 7 Figure 2 is a transmission electron micrograph showing AuNPs as dark spots against the TiO2 support, each particle with a diameter of ≈3nm. Figure 3 shows the UV-visible spectrum of TiO2 (Degussa P25, a standard TiO2 powdered sample) and our TiO2/AuNP sample. For TiO2, the absorption edge was around 400nm. This suggests that the TiO2 consists of both anatase (with an absorption edge at 387nm) and rutile (418nm) phases.7 In the case of TiO2/AuNP, the absorption band was shifted to 562.8nm. 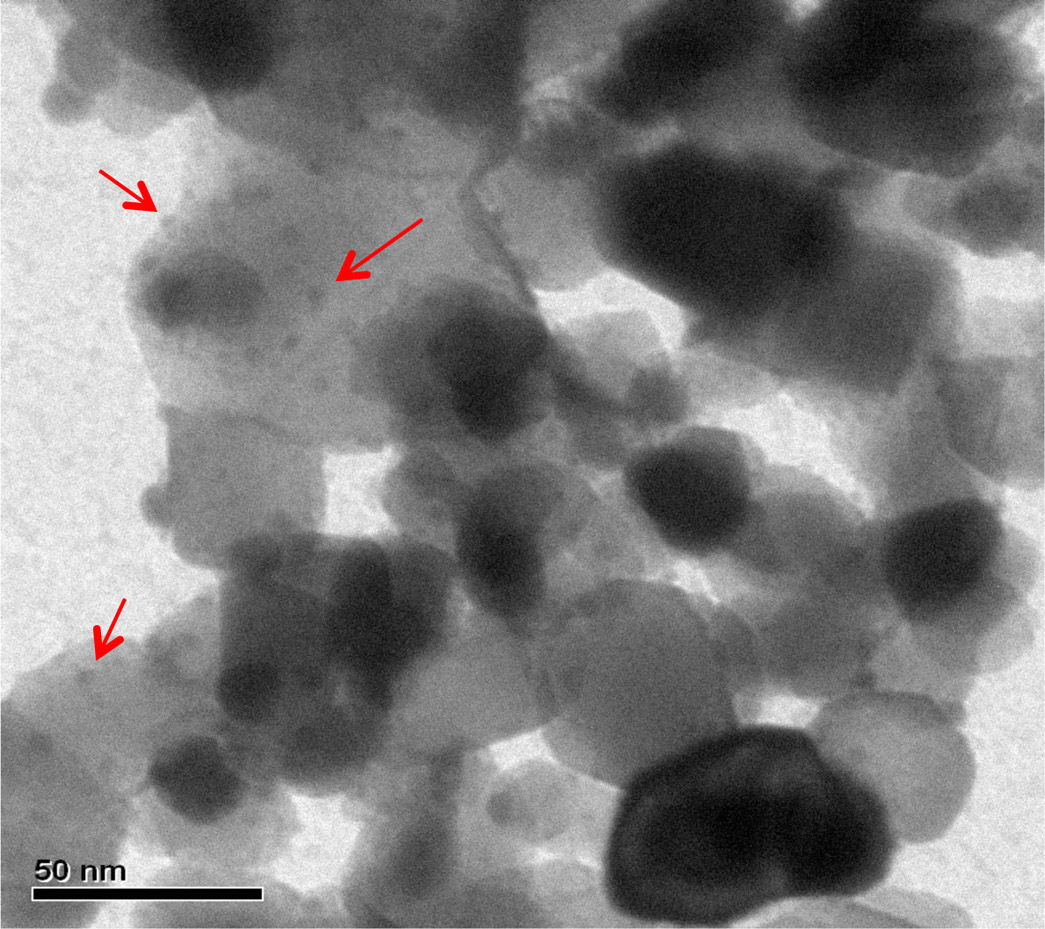 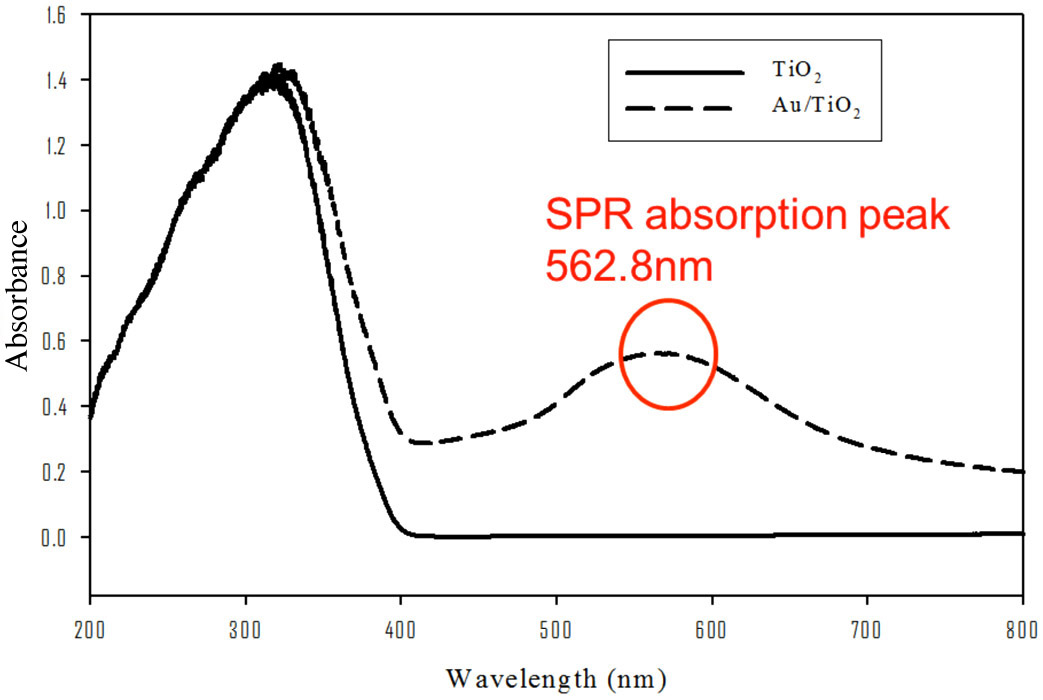 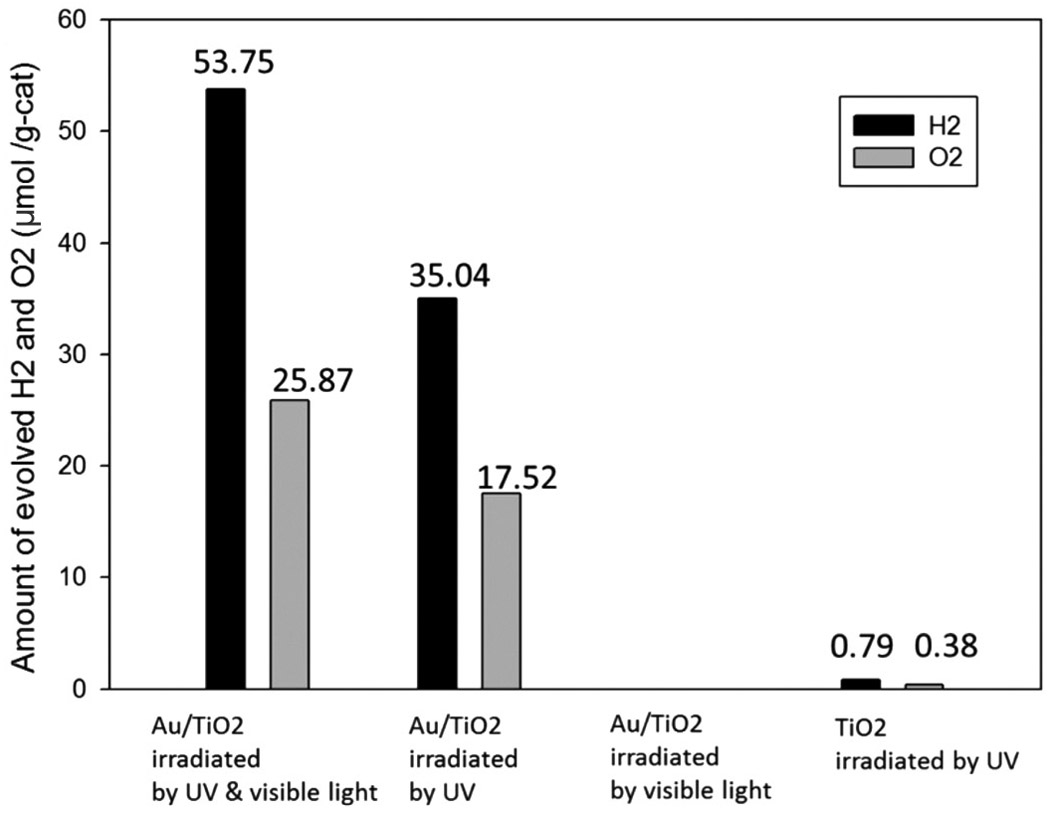 Figure 4 shows a graph of H2 (hydrogen gas) evolution from pure water using our TiO2 and AuNP/TiO2 photocatalyst. The molar ratio of H2 to O2 was 2:1, corresponding to the expected stoichiometry of water splitting. The rate increased by loading AuNPs on TiO2: irradiation under UV for 7h caused 35.04μmol of H2 per gram of catalyst to be evolved in the TiO2/AuNP system, whereas only 0.79μmol of H2 per gram of catalyst was evolved using bare TiO2 under the same conditions. This improvement is due to the AuNPs playing the role of electron sinks, which prevents the recombination of electron-hole pairs. Also shown in Figure 4 are H2 yields for our TiO2/AuNP catalyst operating under UV and visible light. As we predicted, irradiating our TiO2/AuNP photocatalyst with visible light boosted the H2 yield to 53.75μmol/g-cat. We propose that AuNPs not only act as electron sinks and active sites but also promote the formation of surface plasmons, significantly enhancing photoreactivity and increasing the production of H2.

TiO2 is a UV-responsive photocatalyst, and UV irradiation is necessary to produce H2. No H2 was produced using our TiO2/AuNP catalyst in visible light without UV, indicating that the SPR effect alone is insufficient to split water. The ability of AuNPs to act as electron sinks and active sites is therefore a major merit of our catalyst in normal operation, and the SPR effect, though less significant, is still important.

Figure 5. Results of a finite element method simulation with bare TiO2on the left and TiO2/AuNPs on the right. The brights spots in the image on the right indicate electric field (E) enhancement from the AuNPs, which increases the photoactivity of the surface.

To understand the influence of the SPR phenomenon in our system in aqueous solution, we performed a computational simulation. We used a frequency domain 3D finite element method to solve Maxwell's equations of electric field distribution. Figure 5 shows the intensified electric field at the interface between AuNPs and TiO2, as calculated by finite element method electromagnetic simulation. The bright spots surrounding AuNPs indicate a strong collective motion of conduction electrons, which lead to enhanced photoactivity and thus water photolysis. Near-field intensity enhancement of surface plasmons effectively promotes the photocatalytic process.

In summary, we successfully prepared TiO2/AuNP surfaces and studied the effect of SPR on photocatalytic water splitting. The production of hydrogen was significantly increased because AuNPs not only acted as electron traps and active sites but also played an important role in SPR enhancement. Our next goal will be to tune the SPR intensity by preparing different sizes of AuNPs, and to control the distance between AuNPs and TiO2. We expect to find the optimum SPR intensity to increase photocatalytic production of H2.

This work was financially supported by the National Science Council of Taiwan under project 100-2120-M-002-008.