There are a number of different security techniques for observing scenes, such as airports, or assessing the safety of inanimate objects, such as suitcases. For example, luggage is typically subjected to x-ray analysis at airports. This type of ‘portal solution’ requires the cooperation of the owner of the luggage. By contrast, ‘standoff detection’ can be non-cooperative and carried out by an operator and instrument that are a significant distance from the object under measurement. In the case of explosives detection, this distance is around 5–25m. For standoff detection of trace amounts of material, only laser-based techniques have the potential to provide sufficient sensitivity.1–4 Indeed, optical detection techniques based on IR-laser spectroscopy represent a promising approach5, 6 because almost all explosive chemicals typically exhibit strong, characteristic absorbance patterns in the mid-IR spectral range. Transparency of the atmosphere is another crucial prerequisite for detection techniques designed to work over distances of at least a few, preferably some tens of, meters. Thus, the atmospheric transmission window of λ>7:3μm, where (by chance) most organic chemicals exhibit strong light absorbance, is a suitable spectral region for this purpose. Here, we describe the design and assessment of a new mobile imaging standoff detector.

The key element of our system is the quantum cascade laser. These new unipolar semiconductor laser sources are based on intersubband transitions in indium gallium arsenide and aluminum indium arsenide heterostructure superlattices grown on indium phosphide. The gain characteristics of the laser can be optimized for high-power operation as well as for broad spectral tuning. For the present application, it is beneficial to design the quantum well system such that the initial state of the laser transition is a bound state. The broadening of the gain curve is achieved with a superlattice design offering a broadened miniband for the final state. This type of laser design is called ‘bound-to-continuum.’

With these lasers, high power levels that are eye-safe can be generated in the IR spectral region. In the past, semiconductor lasers operating in this spectral range had to be operated using cryogenic cooling. However, new classes of IR lasers are small, rugged, and can operate at room temperature. This makes real-world applications like standoff detection outside a laboratory situation possible. Additionally, quantum cascade lasers are highly wavelength-versatile semiconductor lasers owing to their gain properties, which can easily be tuned over a wide range.7, 8 For spectroscopy of explosives, the range of the laser source needs to cover wavelengths of the fingerprint absorbance of the chemical species being measured.

Within the collaborative Infrared-Laser-based Detection of Explosives project we developed a mobile imaging standoff detection setup that enables detection of explosive traces on surfaces using backscattering laser spectroscopy (see Figure 1). The broadly tunable quantum cascade lasers we used are based on a bound-to-continuum design with a central wavelength of ∼7.5μm. To further increase the spectral range covered by a single chip, we also grew lasers comprising two different active regions with central emission wavelengths of ∼7.8 and ∼8.8μm, respectively. We refer to this as a heterocascading, or HetCas, design. The gain characteristics of two B-to-C lasers centered at wavelengths of 7.3–9.5 and 9.5μm are combined, resulting in enhanced spectral tuning. This band is ideal for concealed observation because wavelengths of ∼8μm cannot be seen with the naked eye. Only a person equipped with an IR imager would be able to see that a measurement was being performed. 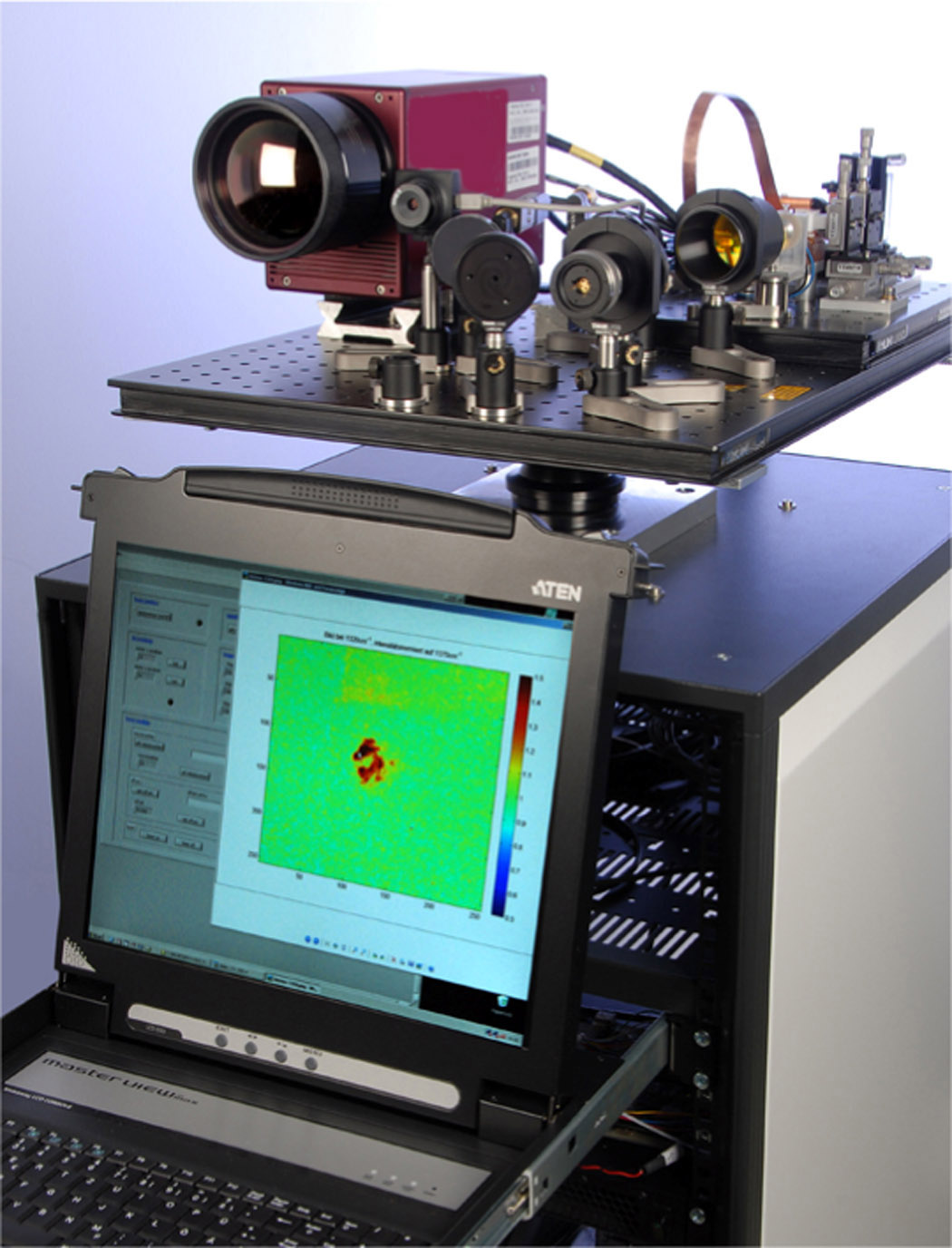 An external cavity quantum cascade laser serves for active illumination with a maximum tuning range of about 300cm−1 (see Figure 2). We used a commercially available IR imager for collecting the diffusely backscattered radiation. Using this setup, we demonstrated the contactless detection of the IR fingerprints of a variety of explosives—such as pentaerythritol tetranitrate (PETN), trinitrotoluene, and cyclotrimethylenetrinitramine—on different substrates, such as pieces of factory-painted sheets from the body of cars as well as the polyamide commonly used in backpacks. The software processing of the hyperspectral datacube enables fully automatized identification against a background of nonhazardous materials. 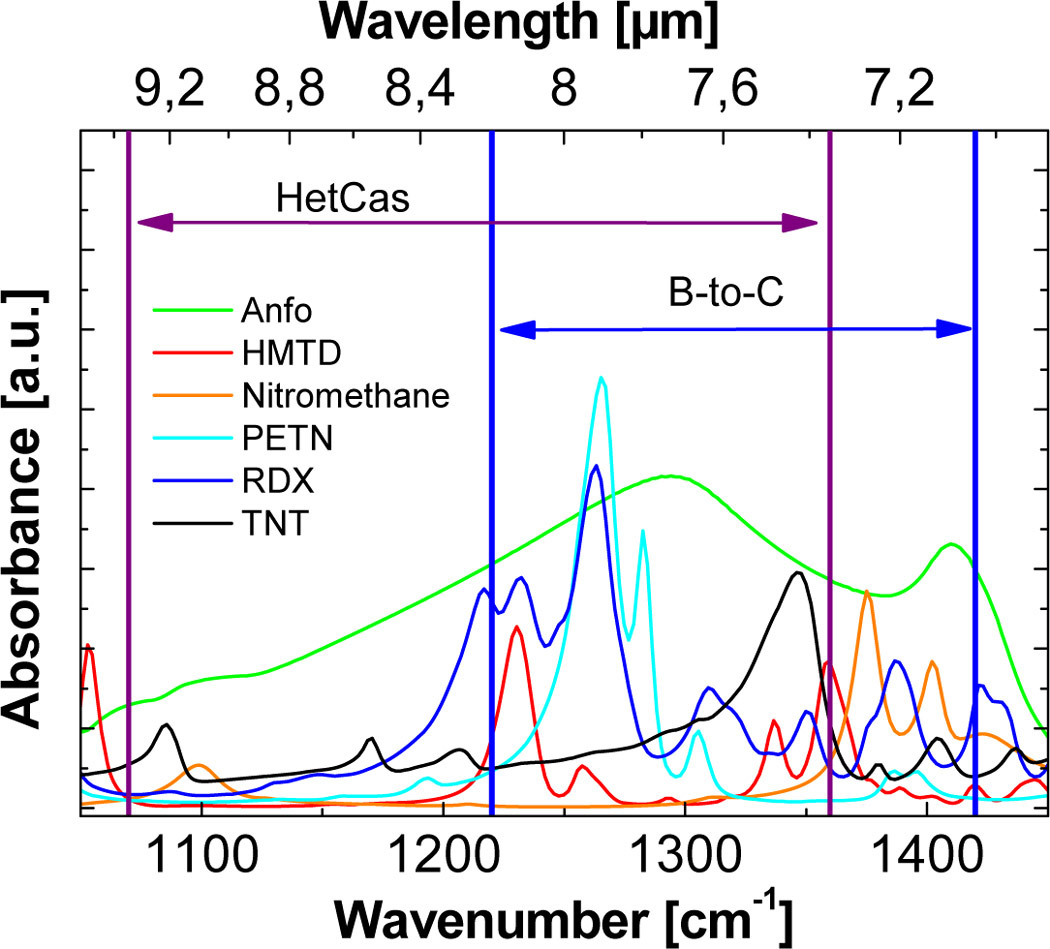 The sensitivity depends both on laser performance and the sensitivity of the IR imager. With an uncooled bolometric IR camera, our system shows reliable detection at a distance of 3–5m. Figure 3 shows a PETN-contaminated handprint on painted autobody sheet after active laser illumination at a distance of 3m. The difference of images taken with laser radiation at 1286 and 1296cm−1 from the raw images in a first step provides a very specific signature for PETN. More sophisticated signal processing, including image analysis, enhances the quality of the discrimination against other materials. Using a high-end IR imager operating at 77K, we could demonstrate identification of traces of PETN up to 20m. 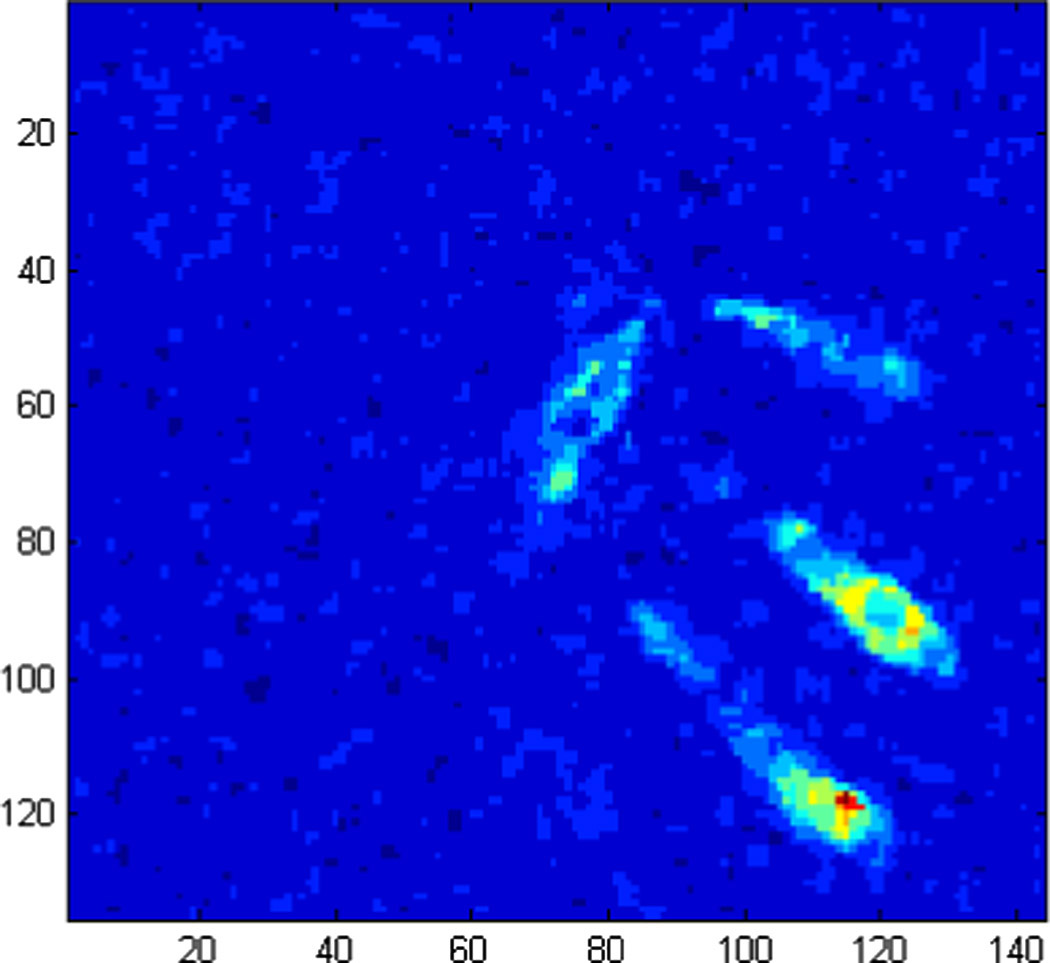 Figure 3. Typical signature from active laser illumination of a handprint of PETN on a painted autobody sheet. The difference of 1286 and 1296cm 1 from the raw images is shown. The axis scales corresponds to the pixel number.

In summary, we have designed a new standoff IR device for detecting organic molecules such as explosives using quantum cascading laser sources. The concept we have demonstrated offers high potential for miniaturization. The next-generation instruments will be hand-held and battery operated. Currently, we use commercially available IR cameras for detecting backscattered laser radiation. With IR detection systems optimized for the special case of active laser illumination, a significant further increase of sensitivity is expected.

Frank Fuchs is a group manager whose most recent research concentrates on standoff detection of hazardous substances using IR laser-based optical techniques. He is project manager of the Infrared-Laser-based Detection of Explosives and the Infrared Laser-Based Fibre-Optic Sensor System for Drinking Water Monitoring projects, which are German government-funded projects.