Simulation and design of a new solar cell, which can potentially be fabricated at low cost, demonstrate its ability to achieve efficiencies competitive with the best cells on the market.
31 August 2011
Cun-Zheng Ning and Derek Caselli

In recent years, concern over global climate change, rising gasoline prices, the British Petroleum oil spill in the Gulf of Mexico, and the disaster at the Fukushima nuclear reactor in Japan have intensified interest in renewable energy technologies. Solar cells are particularly attractive because they are clean, safe, and easily integrated into urban environments. However, the high cost of solar electricity continues to limit its widespread use.

Increasing the efficiency of a solar cell decreases the cost of the electricity it generates if the price of the cell remains fixed. However, in practice, highly efficient solar cells—called tandems because they act like three solar cells in one, each absorbing different components of the solar spectrum—are prohibitively expensive. This is because stacking three different solar-cell materials on top of each other requires a complex fabrication process and materials that meet demanding specifications. Our aim is to create a new type of solar cell that can achieve the high efficiencies of tandems without the high cost. 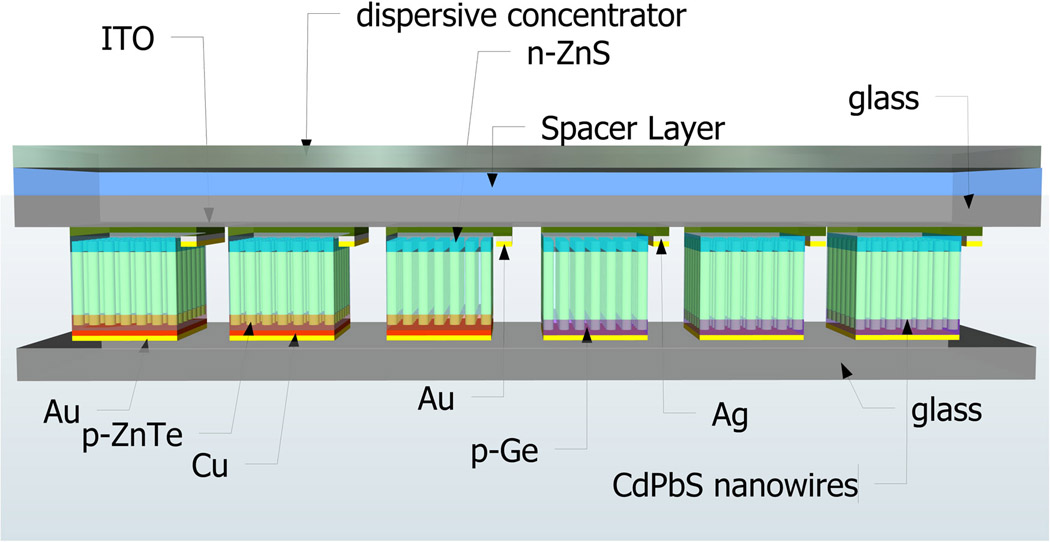 Our approach1 is to put the different solar cell materials side-by-side, rather than in a vertical stack, and split the sun's light so that each photon is absorbed by the most suitable cell. We call this type of device a laterally arranged multiple-bandgap (LAMB) solar cell. Even though this concept is nearly 30 years old,2 and inexpensive dispersive optics have been available for some time, the key missing element has been the ability to produce absorption materials for such lateral cells on a single platform. Past attempts to implement this concept had to use discrete solar cells fabricated on separate substrates, but this approach is prohibitively complex and expensive for most applications. Recent progress in material technology in our group3, 4 and elsewhere5 has allowed inexpensive growth of such absorption materials, which could enable relatively simple, low-cost fabrication of a LAMB cell on a single substrate.

By continuously varying the composition of semiconductor alloy nanowires over the surface of a substrate, we have demonstrated the ability to vary the band gap energy—the minimum energy photons must have to be usefully absorbed—over a wide range with only a single growth step.3, 4 This is important because the band gap also determines the maximum amount of energy we can extract from a photon, so photons with energy near this value are absorbed the most efficiently.6 Like tandem cells, ours use different band gaps to absorb different parts of the solar spectrum. But unlike tandems, which effectively split the solar spectrum by sequentially absorbing longer wavelengths with smaller band gap cells from top to bottom, in our devices this task is performed with an optical element such as a holographic dispersive concentrator.7, 8 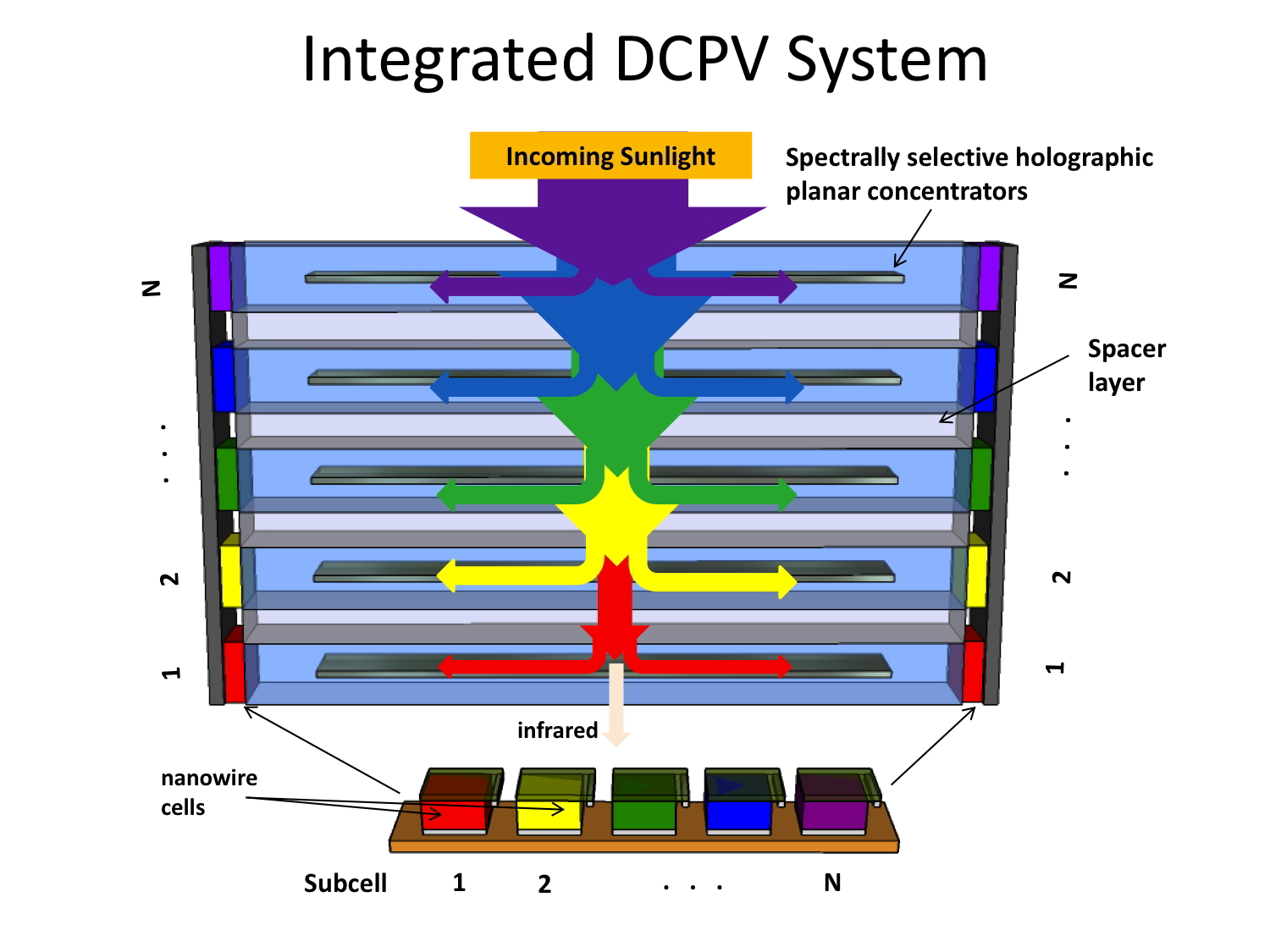 Figure 2. Holographic concentrators are vertically stacked to divide sunlight into wavelength bands and to direct these to different LAMB cells on either side. The photovoltaic system architecture can be realized using holographic optical concentrator designs.7, 8 DCPV: Dispersive concentrating photovoltaic.

We have designed1 a LAMB solar cell (see Figure 1) for use with CdPbS (cadmium lead sulfide) nanowires, which serve as the absorbing materials for six separate subcells. Each subcell consists of intrinsic CdPbS nanowires with different Cd/Pb ratios to produce different band gaps, and heavily doped n- and p-type contact materials to separate the photogenerated charge carriers. We tested this design by conducting simulations using the Silvaco ATLAS software.9 Under the standard direct solar illumination spectrum, we can achieve over 30% conversion efficiency, surpassing 40% with solar concentration.1 The LAMB cells can potentially be integrated with multiple stacked holographic concentrators,7, 8 where each layer concentrates one wavelength band and directs it to a LAMB subcell (see Figure 2).

These results suggest LAMB solar cells based on this technology could achieve performances competitive with high-efficiency tandem cells. Further, we believe they could be built at a fraction of the cost by using a simple fabrication process. The nanowires that constitute the light-absorbing materials in all subcells could be grown in a single, inexpensive chemical vapor deposition growth step.6 The materials for n- and p-type layers can be fabricated using standard thin-film-deposition techniques.

We have demonstrated, using computer simulations, the potential of LAMB solar cells to achieve efficiencies competitive with some of the best photovoltaic devices on the market today. Next, we intend to show that this is achievable in practice, and we will continue working to develop the necessary fabrication technology to build LAMB solar cells inexpensively.

Cun-Zheng Ning is a professor of electrical engineering. He has published over 130 papers and presented over 100 invited, plenary talks, and colloquia worldwide in the areas of laser physics and semiconductor optoelectronics. He was an associate editor of the Institute of Electrical and Electronics Engineers (IEEE) Journal of Quantum Electronics and an IEEE distinguished lecturer (2007–2009). He has been a committee member of SPIE Photonics West since 1996.

Derek Caselli received his BS degree in physics (2008). He is currently a PhD student in solid-state electronics under Cun-Zheng Ning, as well as a Science Foundation of Arizona fellow and scholar of the Achievement Rewards for College Scientists Foundation.