Solar cells exploit photovoltaic (PV) energy conversion—the conversion of solar radiation into electricity—and thus offer a renewable energy alternative to address the rising environmental pollution caused by fossil fuels. The majority of solar cells are made of crystalline silicon—a material used for electronic circuits—that has a high production cost ($1.80 per peak watt). By contrast, low-grade silicon is a cheaper alternative that is widely used in thin-film solar cells. However, poor absorption of light and poor collection of resulting electric charge carriers result in a 50% reduction in efficiency compared to crystalline silicon.1

Poor reflection control (light not entering the film) and poor light trapping (light not being absorbed once inside) reduce light absorption. Defects inside the films also annihilate charge carriers before they can contribute to the electrical output, and so reduce the collection efficiency. We therefore added periodic vertical nanostructures2 to improve thin-film solar cells' reflection control, light trapping behavior, and collection efficiency.

The vertical nanostructures3 diffract light at oblique angles to the cell surface, allowing light to travel inside the film at angles far from the normal. The distance traveled by the oblique light inside the film is much more than the film's thickness, and so this enhances the absorption probability. We noted that the absorption of red light increased more than that of blue light. Red light has a smaller absorption coefficient than blue and is normally less well absorbed. However, it is more diffracted by the periodic structure, and so the path length also increases more. 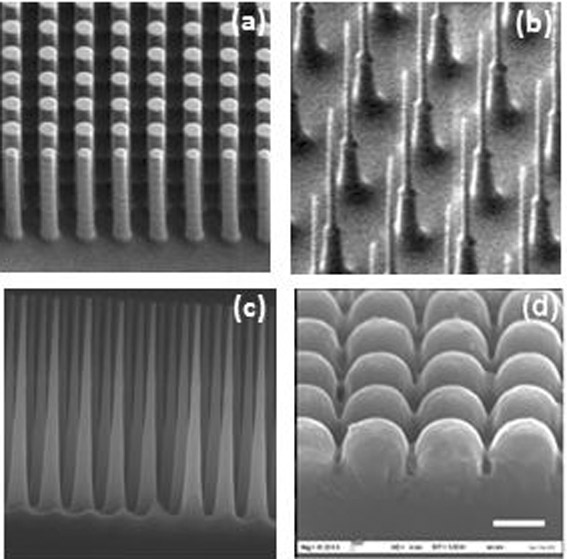 We produced a number of large-area periodic nanostructures by etching selected patterns onto the substrate (see Figure 1). All the structures can be designed with radial or axial junctions (i.e., either wrapping or across the nanostructures perpendicular to their axis). However, the radial junction design is expected to display superior collection efficiency because having junctions all over the nanostructure helps to separate electric charge carriers. Its drawback is a larger junction area, which leads to a larger residual electric current when there is no incident illumination (known as dark current).

This current negatively affects the cell's efficiency by decreasing its open circuit voltage. By contrast, cells with axial junctions that have a much smaller junction area for a given planar surface are expected to display a reduced dark current, provided that their surface is well passivated (i.e., its defects have been removed to keep the surface recombination low). We focused on a uniform pillar design with an axial junction (see Figure 1:a).

We fabricated an 8″ p-type test-grade silicon with emitter junctions at a concentration of 1×1020cm−3 and depths varying between 0.1μm and 1.0μm. We obtained this structure by implanting and annealing phosphorus, guided by computer-aided-design simulations. The reverse of the wafers was implanted heavily with boron, creating a surface field to reduce surface recombination. We used deep-ultraviolet lithography and reactive-ion etching processes to design periodic nanopillars with a diameter of between 50 and 200nm, and a height ranging from 250 to 1000nm, at a fixed pitch of 400nm. We chose to use zinc oxide—produced with an atomic layer deposition process—at the tip of the nanopillars as the top transparent contact to collect electric charge carriers, while letting photons go through the contact and reach the underlying silicon. To study the possibilities offered by our design, we varied the pillar diameter, pillar height and emitter junction depth. (Similar structures can be achieved at lower production cost using nanoimprint lithography or self-assembly of silica beads.)

Figure 2. (a) Comparing reflectance spectra of the planar solar cell with nanostructures made of silicon nanopillars (SiNP) of different diameters (D) with fixed height (H) and periodicity (P), measured at the top surface of samples. (b) The corresponding external quantum efficiency measurement showing significant enhancement when the pillar duty ratio is 1:1. The emitter width is 250nm.

We then studied the effect of changing the diameter of the pillars on the reflectance of the cell (See Figure 2:a). Devices with a duty ratio of 1:1 (200nm diameter: 200nm space) exhibited much reduced reflectance compared to narrower or no pillars. The maximum reduction of reflection with this duty ratio was due to a less abrupt change in the effective refractive index along with a strong diffraction effect. That occurred because the change in refractive index between two media is correlated with the level of reflection (i.e., the smaller the change, the weaker the reflection). We observed that the 1:1 duty ratio made the weighted average refractive index change more gradual than in other structures studied (1–1.47 at the tip of the pillar and 1.47–3.42 at the bottom of it). Consistently, this ratio also provided most diffracted radiation where its un-diffracted component—mathematically the zeroth diffraction order—was the lowest. Beyond ∼1100nm wavelength, the reflectance was a result of the reflection from the aluminum metal on the reverse of the wafer. These photons do not have sufficient energy to be absorbed and to contribute to the flow of electric charge carriers, and so we did not make measurements at these wavelengths.

To understand the relative effectiveness of various designs, we assessed the external quantum efficiency (EQE)—a measure of carrier collection per incident photon—for the nanopillar solar cells against a reference planar cell (see Figure 2:b). We noted that, with their reduced reflectance, the EQE of the 1:1 nanopillar solar cell was much better than other samples: its peak value exceeded 80%. The controlled reflection and high EQE of nanopillar solar cells led the device to produce a record-high short-circuit current of 34.3A/cm2—under one-sun (AM 1.5G) illumination—compared to previously reported performances of nanostructure-enhanced solar cells.4–8 However, we noticed a high series-resistance effect on the fill factor (i.e., the ratio of the actual maximum obtainable power to the theoretical power) that kept the power conversion efficiency low. We attributed the high series resistance to our un-optimized zinc oxide deposition process. We could also explain the presence of a relatively strong dark current, which reduces the open-circuit voltage, by poor passivation of the pillar surface.

In summary, vertical nanodevices implanted into thin-film solar cells demonstrate high potential for use as low-cost high-efficiency third generation solar cells. These cells have much improved reflection control and external quantum efficiency, indicating improved absorbance and collection efficiency. However, our work is still at an early stage. Further development will focus on identifying a more suitable transparent conducting oxide to improve the top contact with the pillar and reduce series resistance, as well as on improving surface passivation to reduce dark current.

Navab Singh is a senior researcher at IME, whose work focuses on nanowires technology for green electronics and clean energy.

She Mein Wong is a PhD student. Her thesis focuses on the design, modeling, and fabrication of silicon nanostructure solar cells.

Jian Wang is a researcher; his main research interest is silicon nanostructures and metal plasmonic particles for photovoltaic applications.

Dim-Lee Kwong is a professor and the executive director of IME. Prior to that, he was the Earl N. and Margaret Bransfield Endowed Professor at the University of Texas at Austin (1990–2007), and the Temasek Professor of National University of Singapore (2001–2004).

HongYu Yu has been a Nanyang Assistant Professor at NTU and a faculty associate at IME. His research focuses on non-volatile memories and clean energy. He will shortly take up a post at Peking University, China.