Surface solar irradiance (SSI) is a measure of solar radiation at the surface of the Earth. More precisely, it is defined as the amount of solar incident energy per unit time, per unit area detected on a horizontal surface at ground level. In August 2010, SSI was identified as an essential climate variable by the Global Climate Observing System,1 meaning that it is a parameter of key importance for understanding and monitoring the global climate system. In addition to such climatology applications, SSI is of high interest in domains as varied as solar energy, health, architecture, agriculture, and forestry.

SSI estimation can be made using solar radiation measurements from the existing network of meteorological ground stations. However, these are sparsely distributed worldwide, and stations measuring SSI on the long-term are very rare. Therefore, satellite-based methods for SSI estimation, such as Heliosat,2 represent an operational alternative to ground-based approaches, as they enable a better spatial and temporal coverage. Indeed, several studies demonstrate the superiority of the use of satellite data over alternative methods.3

The Meteosat series of satellites are geostationary (they travel above Earth's equator at a speed matching that of the planet's rotation) and provide synoptic views of Europe, Africa and the Atlantic Ocean for meteorological purposes. Initiated by the European Space Agency, the program is currently operated by EUMETSAT, the European Organisation for the Exploitation of Meteorological Satellites.

Images taken in the visible channel clearly depict clouds and, more generally, the optical state of the atmosphere (see Figure 1). They are currently used to assess SSI with spatial and temporal resolutions better than those delivered by the Surface Radiation Budget project (an alternative scheme aimed at determining radiative fluxes) over the whole Earth.4 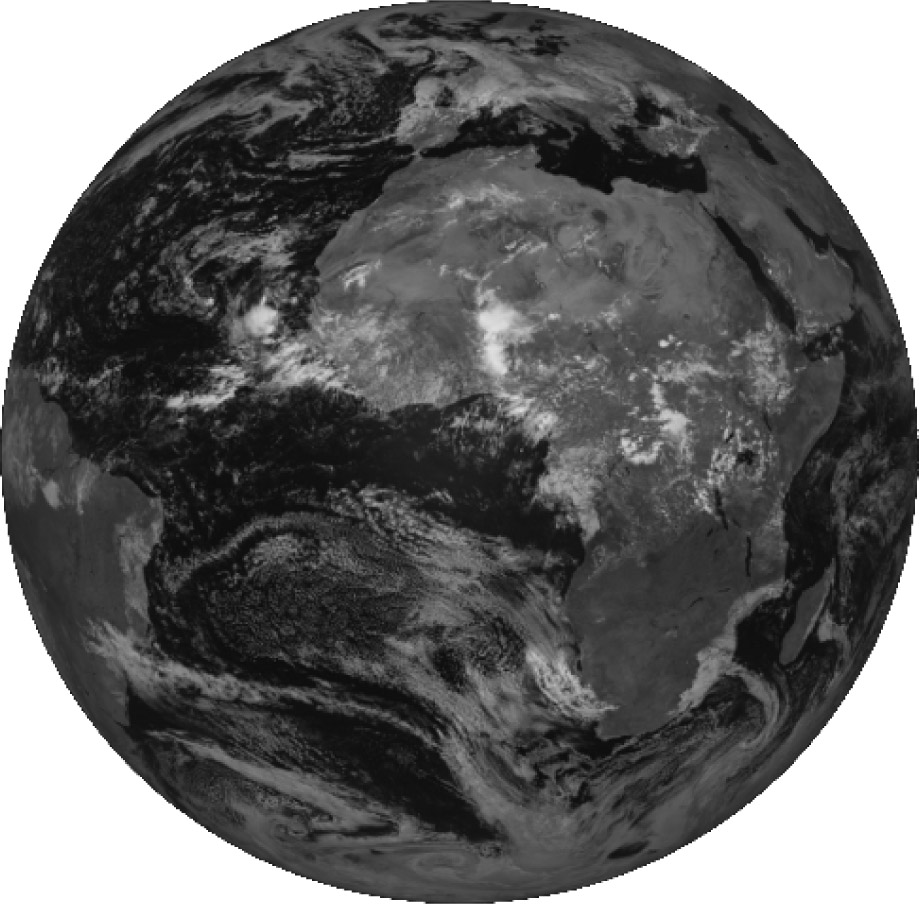 Figure 1. Example of a Meteosat SEVIRI (Spinning Enhanced Visible and InfraRed Imager) image in the visible channel, taken on September 7, 2010 at 1200 UTC. Reflectance increases from black to white (copyright 2011 EUMETSAT).

The HelioClim (HC) project is an initiative of Mines ParisTech, the French school of engineers, and ARMINES, a non-profit French organization. It was launched in 1997 to increase knowledge of SSI and to provide wide access of SSI values for any site or any instant within a large geographical area and a large period of time.5 The project covers Europe, Africa, and the Atlantic Ocean, and we have created two databases that can be accessed online.

The first of these databases, HC-1, offers daily values of SSI for 1985 to 2005. We created it from archives of three-hours-interval images from the International Satellite Cloud Climatology Project, B2 data-set (ISCCP-B2)6 of the Meteosat First Generation, to produce estimations of daily values of SSI with a pixel size of 5km and spatial sampling of 30km. The uncertainty of the daily and monthly averages of SSI provided by HC-1 was assessed by comparing its values to ground-based measurements for sites in Europe and Africa. We found strong underestimates for latitudes greater than 45° and smaller than −45° because there is often not enough data to accurately describe the daily variation of SSI.7 On the contrary, its quality in depicting SSI in the Mediterranean basin, Africa, and likely the Central Atlantic Ocean, is very good. The bias in monthly averages is less than 10 W/m2 in absolute value and less than 5% in relative value.8

The HC-3 database improves spatial and time resolution, uncertainty on SSI, and time to access data. It exploits the enhanced capabilities of the Meteosat Second Generation series of satellites to deliver values of SSI every 15min, with a nadir spatial resolution of 3km, in near real-time (see Figure 2). Comparison between HC-3 and ground-based measurements of SSI reveals a very good agreement.7 The bias in monthly means is less than 10W/m2 in absolute value and less than 5% in relative value. The correlation coefficient is greater than 0.97. 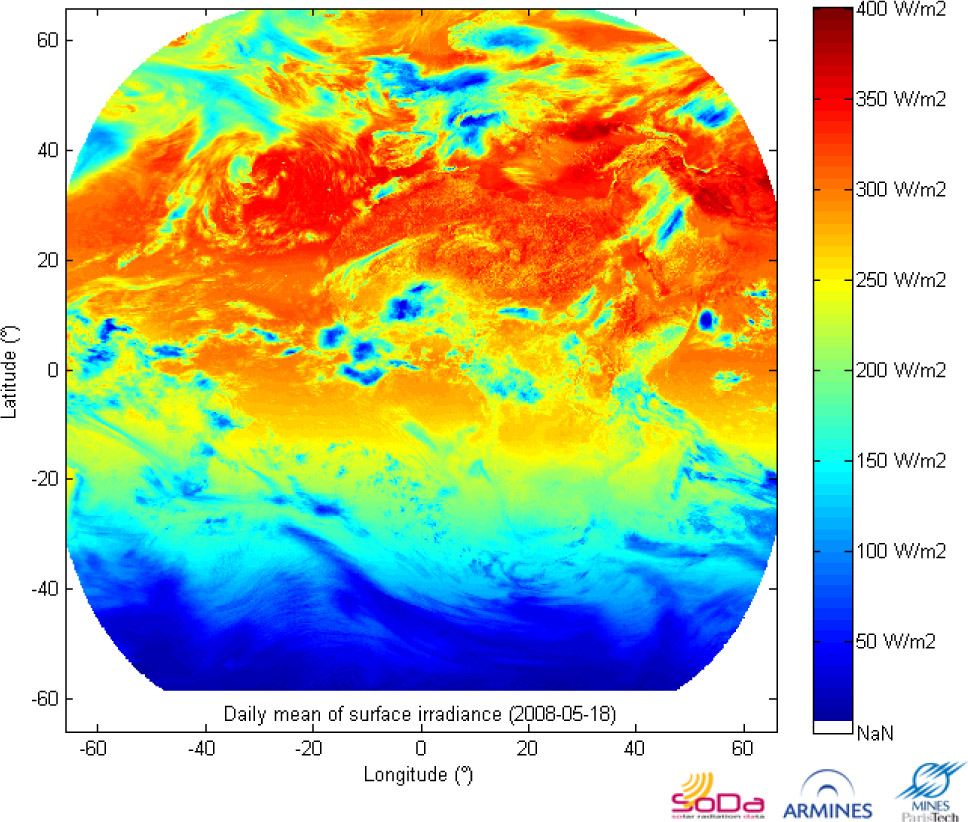 Dissemination is a key activity in the HC project, and we are committed to provide the public with easy access to SSI values. Both databases were conceived to offer fast access to large time-series of SSI through the SoDa (solar radiation data) service, an initiative devoted to professionals in solar energy and radiation.9 In response to the approximately 2 million requests registered in 2010, we have developed web services to disseminate the HC databases,10 and a dedicated community portal has been created for this purpose.11 It exposes HC data using Open Geospatial Consortium standards as maps (Web Map Service) as well as time-series (Web Processing Service).

Requests for more accuracy continue, in particular in the decomposition of the global radiation into several ranges of wavelengths, and into direct and diffuse radiation. One approach to reach this goal is to improve both the physical modeling of the optical state of the atmosphere and the quality of the model's inputs. In the future, we will further develop such a method in collaboration with the German Aerospace Center. Named Heliosat-4, this new approach is aimed at creating databases of solar irradiance improved with respect to the current ones.

The authors are grateful to EUMETSAT and Meteo-France (the French national meteorological service) for the provision of Meteosat data and the World Radiation Data Center for supplying SSI data for ground measuring stations. The authors are also thankful to the company Transvalor, responsible for the SoDa Service, for permitting an efficient access to HelioClim databases. The research leading to these results was partly funded by the European Union's Seventh Framework Programme (FP7, 2007–2013) under grant agreement no. 218793 (Monitoring Atmospheric Composition and Climate project).