A new mirror-manufacturing process shows promise for producing the strongly aspherical mirrors suited to the next generation of ground-based gamma-ray astronomical telescopes.
19 May 2011
Rodolfo Canestrari

Imaging atmospheric Cherenkov telescopes (IACTs) are cutting-edge instruments for studying astronomical sources that emit very high energy gamma rays. They operate from the ground using Earth's atmosphere as a calorimeter: energetic photons or charged particles coming from the most distant parts of the Universe hit the atmosphere and interact with it. They lose energy by producing pairs that run faster than light (in air) and emit a bluish light by the Cherenkov effect. This propagates into the atmosphere, generating a so-called shower, whose light pool covers about 30,000m2 on the ground. These electromagnetic showers are very faint relative to the night-sky background. They are also rare and last for only a few billionths of a second.

Showers can be imaged by very large light collectors equipped with proper focal plane instrumentation and fast gigahertz electronics. From these images, both the incoming direction and the energy of the primary photons can be recovered. If many telescopes are used and more than one detects the same event, the angular resolution of the reconstructed incoming direction is improved. Figure 1 shows a sketch of the working principle described so far. Such observations make it possible to understand the physics behind the extremely powerful acceleration mechanisms at work in the astronomical sources emitting the primary gamma photons and to gather clues to the origin of the Universe. 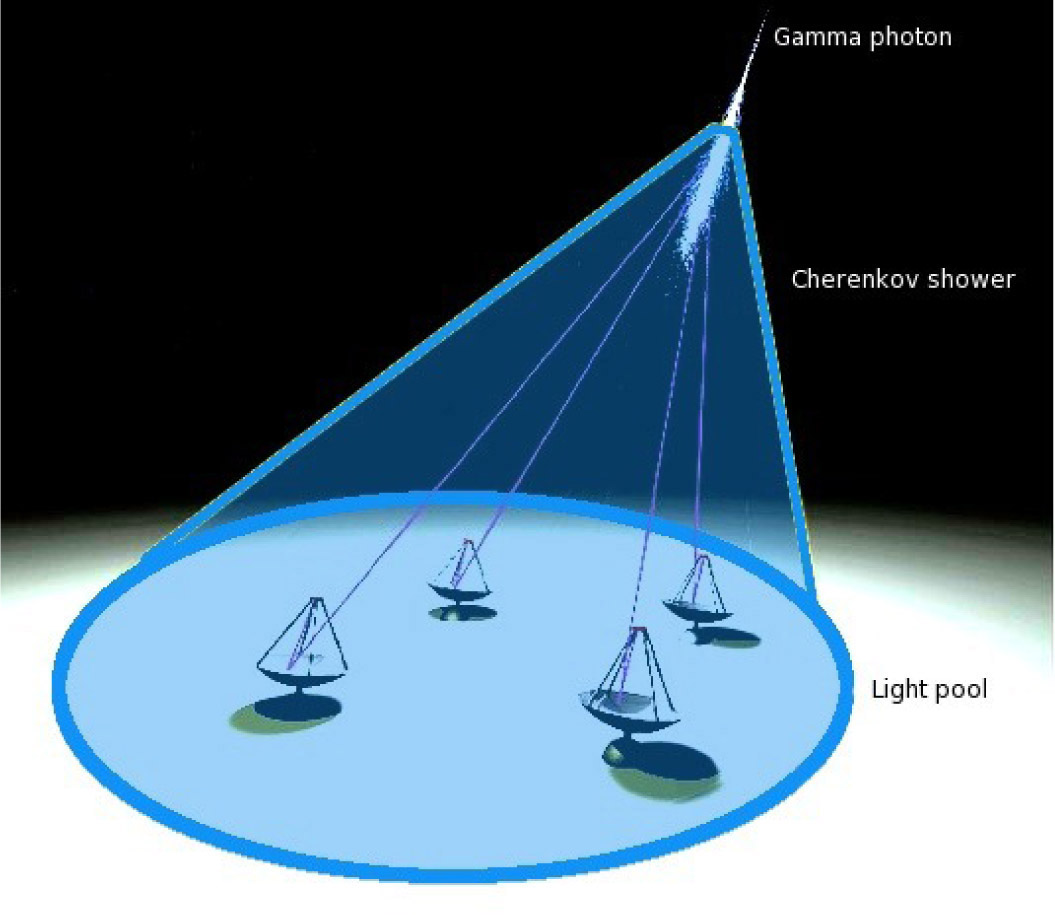 The Cherenkov Telescope Array is an ambitious worldwide project to build many IACTs whose reflecting area will approach about 10,000m2 spread over a few square kilometers.1 Here we examine some aspects of the mirror requirements and related developments in their manufacturing technique.

The reflectors used in IACTs are tessellated and typically consist of a number of identical segments with spherical profiles. The design requirements for those segments are summarized in Table 1. They must be low-cost, lightweight, robust, and reliable, and each one must be more than 1m2 in size. A focal point-spread-function value of a few arcmin per single mirror segment is acceptable. This is a much less stringent requirement than that for optical telescopes. However, IACTs are usually not protected by domes, so the mirrors are permanently exposed to the environment. All these requirements make their fabrication challenging.

A recent project at the Brera Astronomical Observatory of the Italian National Institute of Astrophysics (INAF-OAB) was dedicated to a manufacturing process optimized for this type of mirror.2 The chosen substrate has a sandwich-type mechanical structure that confers stiffness and low areal density. The process is called cold-glass slumping, and it exploits the concept of replication of a master shape. Figure 2 shows the main manufacturing steps, which are described briefly below. 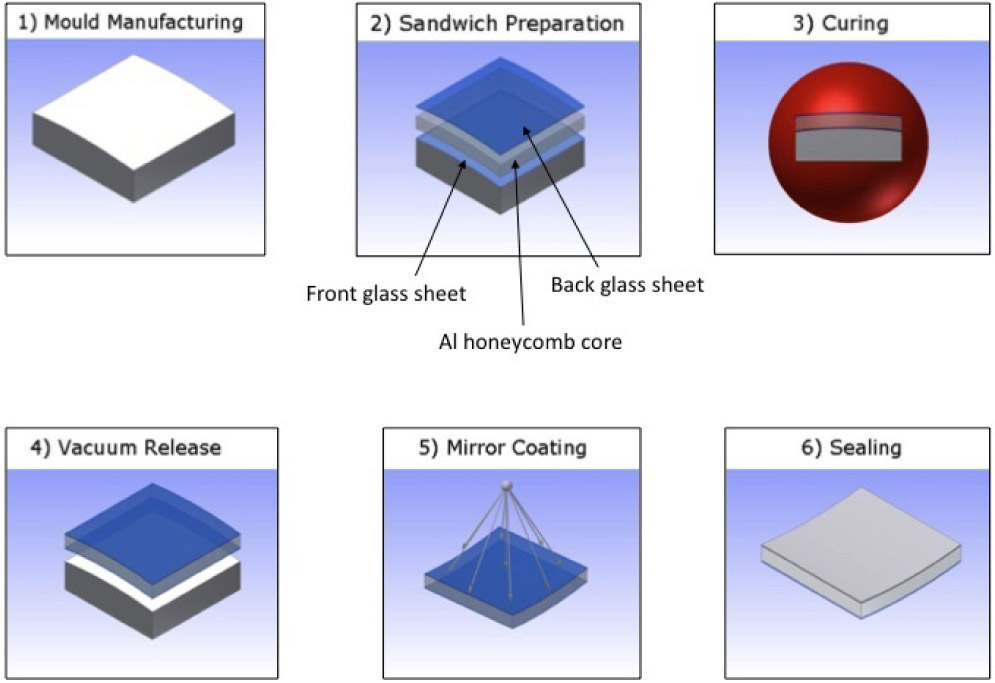 A thin glass sheet is bent by vacuum suction and is made to adhere to a mold having a highly precise shape (the mold's profile is the negative of that desired on the mirror). The complete panel is assembled by gluing a reinforcing core structure and a second thin glass sheet. Aluminum honeycombs are typically used for the core structure. After the glue is polymerized, the vacuum suction can be released and the substrate properly coated. The coating consists of two layers deposited by plasma vapor deposition—one of evaporated aluminum and another of thin quartz—as protection against reflectivity losses and scratches. The mirror is then finished by sealing its edges to prevent damage from water infiltration. Figure 3 shows one of those mirrors. A production rate of two panels per day was successfully achieved. This effort found application at the world's largest IACT: the 17m MAGIC II telescope located at Roque de Los Muchachos, La Palma, Canary Islands.3 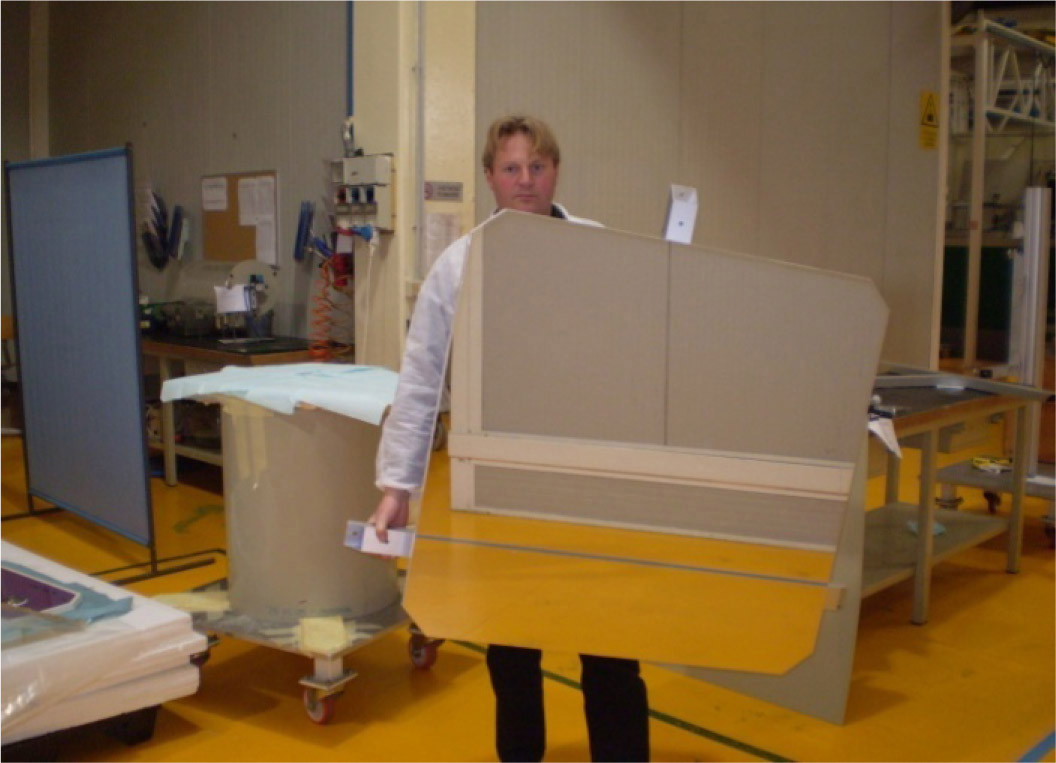 Figure 3. One of the 112 mirrors produced for the MAGIC II telescope. (Image courtesy of Media Lario Technologies.)

The elasticity of glass, although modest, is the working principle of this technology. Since the entire process occurs at room temperature, the glass sheets permanently retain the tensile stresses resulting from bending. Clear limitations imposed by this method appear in the surface profiles of the mirrors, particularly the achievable radii of curvature. The mirrors produced so far have radii of curvature on the order of 34–36m. For the next generation of IACTs, we will need to modify this production process to obtain the surface profiles required for the Schwarzschild-Couder optical layout:4 short radii of curvature and strongly aspherical components are the main challenges to be faced. The radii of curvature would be less than 10m (down to a few meters), and the asphericity can reach deviations of a tenth of a millimeter from the best-fitting sphere. To this end, we are implementing a thermal shaping of the glass sheets before the cold-glass slumping process. Heating the glass to its transformation temperature makes it soft enough to easily accept modeling. This makes it possible to impose the required surface profile, even a very curved one. The change in the profile is permanent, and it leaves the glass free of stress. Some preliminary mirrors have been realized as we look mainly for a reduction in the radius of curvature. A segment having a spherical concave profile of 5m has been produced and tested in our labs, achieving promising results and demonstrating the feasibility of this approach.5 The next step will be to add the aspherical contribution to the main spherical profile. If this test is successful, it could prove that this technology can be adopted for Schwarzschild-Couder Cherenkov telescopes.

In summary, we have developed a new manufacturing process for making low-cost, large-area mirrors for Cherenkov telescopes. It is based on the precise replication of a master shape to produce several identical mirrors. The process demonstrated its potential in the MAGIC experiment. The next generation of IACTs might be implemented by adopting more complex optical layouts with more demanding mirror requirements. INAF-OAB is working on modifications to the cold-glass slumping process to obtain large mirrors with short radii of curvature and strong asphericity. The new approach in principle can lead to high-resolution optics, a path we will pursue in the near future.

The author is grateful for support from the Italian Ministry of Education, Universities, and Research, from INAF, and from the brilliant people who have helped out in one way or another.

Rodolfo Canestrari wrote his PhD thesis on thin glass sheets for innovative mirrors in astronomical applications. His main research interests are the development of mirror-manufacturing technologies and ion-beam figuring for high-precision optical components. He is heavily involved in both mirror and telescope structure development for the Cherenkov Telescope Array.