Terahertz imaging for detection or diagnosis

A camera that operates at video frame rate offers a solution to stand-off imaging for search and rescue in fire disasters and label-free biomaterial detection.
08 June 2011
Iwao Hosako and Naoki Oda

Terahertz (THz) imaging is a powerful technique that exploits a nonionizing (i.e., safe) portion of the electromagnetic spectrum located between microwaves and the IR. Directed toward an appropriate sample, such as wood or ceramics, THz light passes through and is detected by a camera. Because of its nondestructive nature, THz imaging is applicable to many areas. For example, it has advantages over x-rays for diagnosis of skin cancer1 and can detect sketches underlying paintings.2 The technique is also potentially advantageous in conditions of hot, black smoke, where conventional imaging is unsuitable. Even ordinary smoke is difficult to see through at visible wavelengths, and hot, black smoke saturates and scatters IR radiation. THz wavelengths are absorbed by smoke less strongly and transmitted more readily through it, compared with the IR. However, although well-placed for (bio)materials analysis, THz imaging was until recently considered ill-adapted for hot conditions,3 limiting its utility in search and rescue missions. 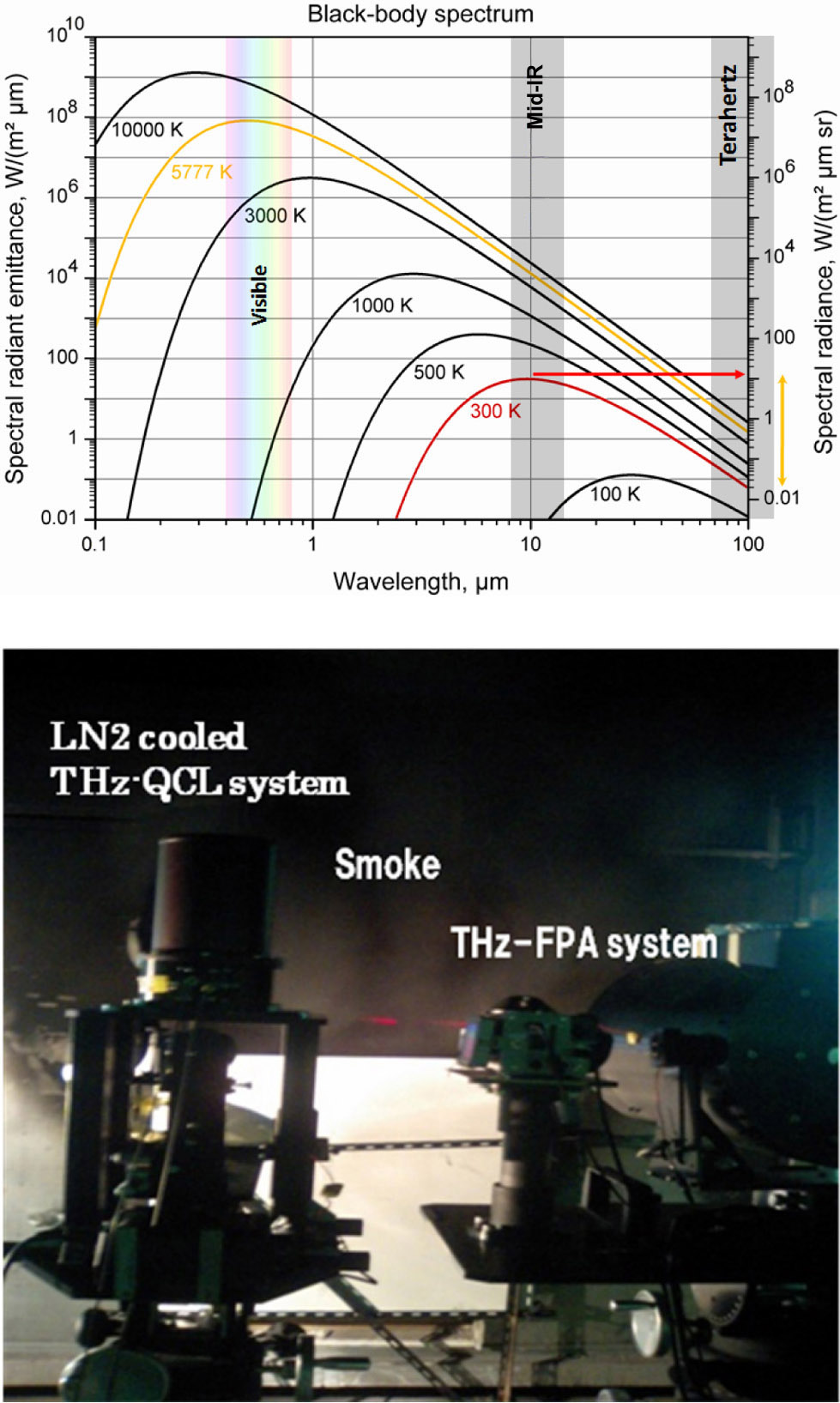 We report a THz camera consisting of a quantum-cascade laser light source4, 5 and a microbolometer focal-plane array (an IR detector common in thermal cameras). The camera is based on one we previously designed,3 but with improved power and sensitivity. We describe two applications of our imaging system: stand-off imaging for search and rescue in a fire disaster, and label-free biomaterial detection. 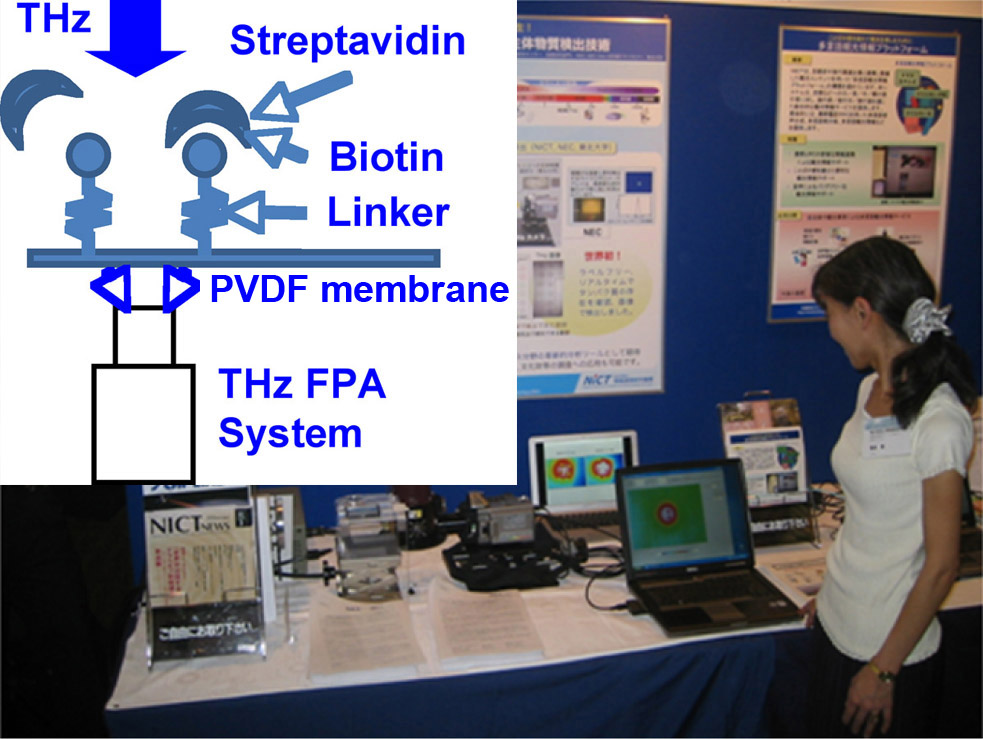 Figure 2. Demonstration of the label-free biomaterial detection system at a 2009 exhibition in Kyoto. A 1200K blackbody was used as a light source because venue regulations prohibited the use of liquid nitrogen. Inset: Schematic of the detection principles. PVDF: Polyvinylidene difluoride.

The camera requires high-intensity illumination. A blackbody is normally used as a reference source to calibrate imaging in the mid-IR (thermal IR) region. Yet its relatively weak radiative power makes it unsuitable for THz calibration and imaging (see Figure 1). Here, strong THz sources, such as quantum cascade lasers, are indispensable. The average power output of our liquid nitrogen-cooled laser system—which operates for several hours—is several microwatts, sufficient for the improved microbolometer array (320×240 elements). Thus, the quantum cascade laser acts as an external source.

We improved that camera's sensitivity by changing the sheet (electrical) resistance of an absorption (light-gathering) layer, developing THz-transparent materials, and adding long-pass metal mesh filters to block IR radiation.4, 5 We included frame- and pixel-integration functions to increase the signal-to-noise ratio (SNR). However, simple frame integration did not work as expected because the microbolometer generates low-frequency noise. Consequently, we incorporated lock-in imaging, which reduces low-frequency noise and increases SNR as a function of the square root of the frame-integration number.

With these technical improvements in place, we performed stand-off (∼5m distance) THz-imaging experiments under simulated fire conditions (see Figure 1). We obtained images in hot, black smoke (with an SNR of ∼140 vs.∼6000 with no smoke) that blocked visible light and and induced signal saturation in the long-wavelength IR (LWIR) region. These results clearly show an advantage of THz compared with LWIR or visible imaging.6 Our camera is particularly adapted to search and rescue missions due to its 60Hz (real-time) image-acquisition rate.

In pharmaceutical drug discovery, molecular interactions are commonly tracked using chemical ‘labels’ that are costly and prone to error. We applied our THz camera to label-free detection of small-molecule reactions with proteins. The THz waves are readily absorbed and enable sensing of very small changes in biomaterials (see Figure 2). The detection sensitivity of a label-free biotin-streptavidin reaction (routinely used in biotechnology), for example, was nearly the same as that of conventional methods, and the THz system has the advantage of high throughput and low cost. We note that for real life-science applications, our detection system requires a very large biomaterial spectral database in the THz range. 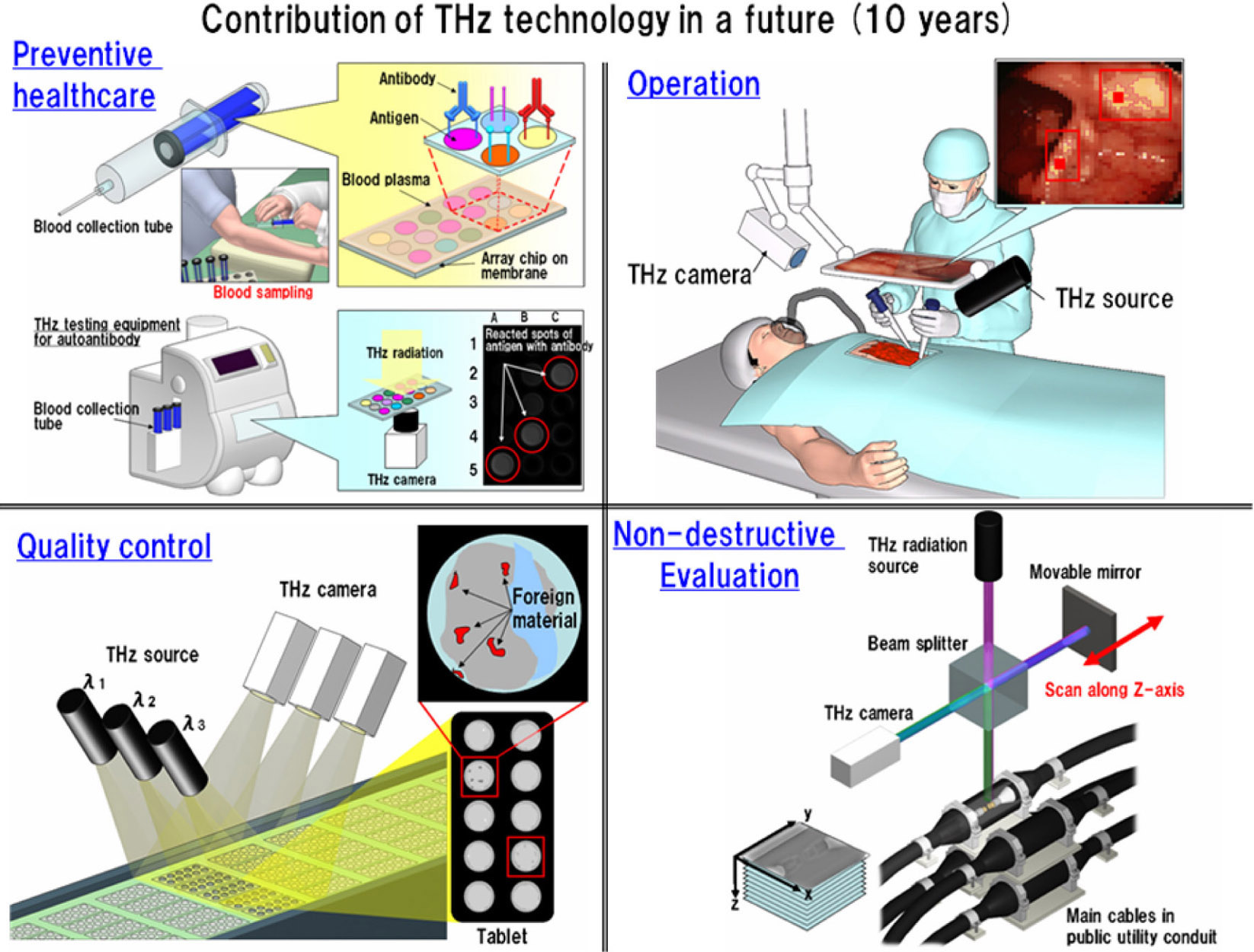 In summary, we have used a THz camera to acquire images through hot, black smoke and to detect a biomolecular reaction. In the future, we plan to improve the performance of the imaging system. In terms of the light source, we expect soon to be producing milliwatt-class laser output, which represents much higher power than the several microwatts currently possible. The sensitivity of the microbolometer array can be enhanced one order of magnitude by optimizing the bolometer structure to THz waves and using better materials to fabricate the device. Ultimately, as suggested in Figure 3, we expect such an imaging system to be useful in a range of applications from preventive health care to quality control, surgery, and nondestructive evaluation.

Iwao Hosako is a leader of the THz project. His research interests include semiconductor emitters, detectors, and optical thin films. He serves on several research committees for THz technologies.