In classical holography, light waves from a real object are recorded on light-sensitive films by interference with reference waves. Object waves are reconstructed by diffraction of the interference fringes after chemical processing of the films. Thus, classical holography requires a real object to create its 3D holographic image. It is, therefore, impossible to create holograms of virtual 3D scenes—such as provided by modern computer graphics—and edit the 3D scene after recording the interference fringes.

An interference fringe is just a 2D image, and the reference wave can be expressed by a simple theoretical framework. In principle, therefore, we could easily produce the fringe pattern by numerical simulations of optical interference if we could obtain numerical data of the object waves from the 3D scene. However, calculating object waves from virtual 3D scenes is very hard work, even for modern computers. It sometimes takes several hundreds of hours or days to calculate object waves by conventional methods. Capturing light waves from real objects is also not easy, because the resolution and sizes of currently available image sensors do not meet the requirements for computer holography.

We recently developed a novel computer algorithm1 that enables synthesis of holograms of completely virtual, computer-generated 3D scenes in only several tens of hours. In addition, we developed a technique2 to capture light waves from real objects at high resolution and over a wide area to meet computer-holography conditions. This enables digitization of the entire process of classical holography. The resulting computer holograms give viewers a strong sensation of depth that has never been achieved with conventional 3D images.

Figure 1 shows the 3D image reconstructed by a computer hologram, ‘Moai II.’ The 3D scene is composed of two 3D objects (moais) and a 2D picture of the background (see Figure 2). The shape of the 3D objects is given by polygon-mesh data, while the 2D picture is a digital image. Light waves originating from the moais are synthesized using the polygon-based method.4 In addition, we used the silhouette method5, 6 for light shielding to prevent the 3D objects from becoming transparent, phantom images. The hologram's fringe pattern is computed by numerical interference with a reference wave—usually a simple plane wave or a spherical wave—and printed on a plate of chromium-coated glass using laser lithography. This fabrication process is the same as that used for fabricating photomasks, e.g., for generating fine structures such as in large-scale integration. The fabricated computer holograms are chemically stable and do not suffer from aging degradation, unlike classical holograms. 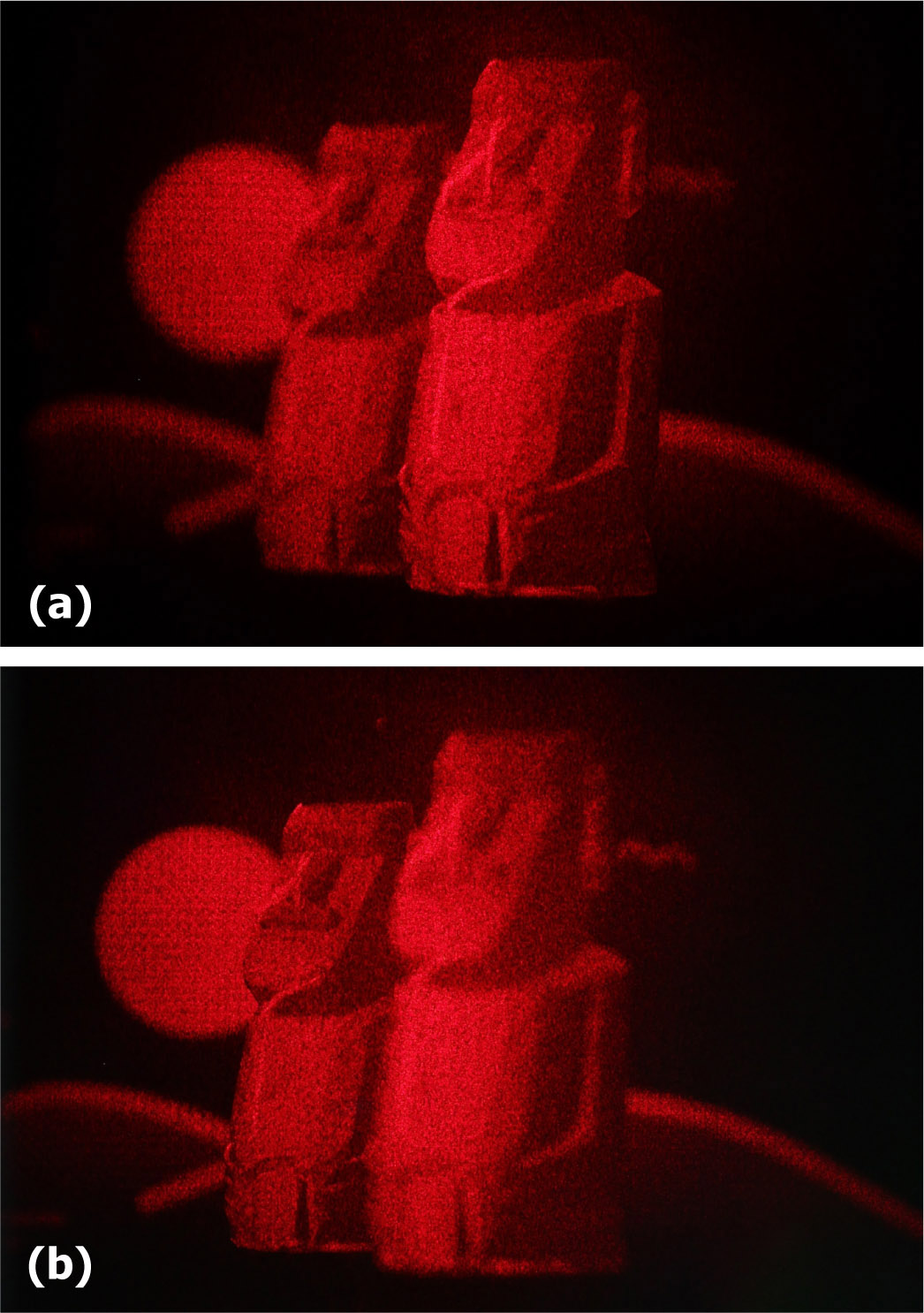 Light waves from real objects are digitally captured by synthetic-aperture phase-shifting digital holography,2 where the image sensor is moved to cover the area over which the object waves are spread. A captured data set—see Figure 3(a)—represents the spectrum of the object waves, because a lensless Fourier setup (i.e., a spherical reference wave) is used as capturing optics. Therefore, light waves from the object are numerically reconstructed by a simple fast-Fourier transform: see Figure 3(b). Fourier transformation converts the sampling interval of the object waves to a suitably small value for construction of the computer hologram.7

Figure 4 shows the optical reconstruction of the computer hologram ‘Bear II.’ It comprises a mixed 3D scene composed of the captured light waves of a real object (a small toy bear), computer-graphics-modeled 3D objects (bees), and a 2D digital background picture (see Figure 5). Note that the captured bear appears twice in the scene, i.e., the same captured light wave is used twice. This is impossible in classical holography. Only digitized computer holography allows editing of the 3D scene. 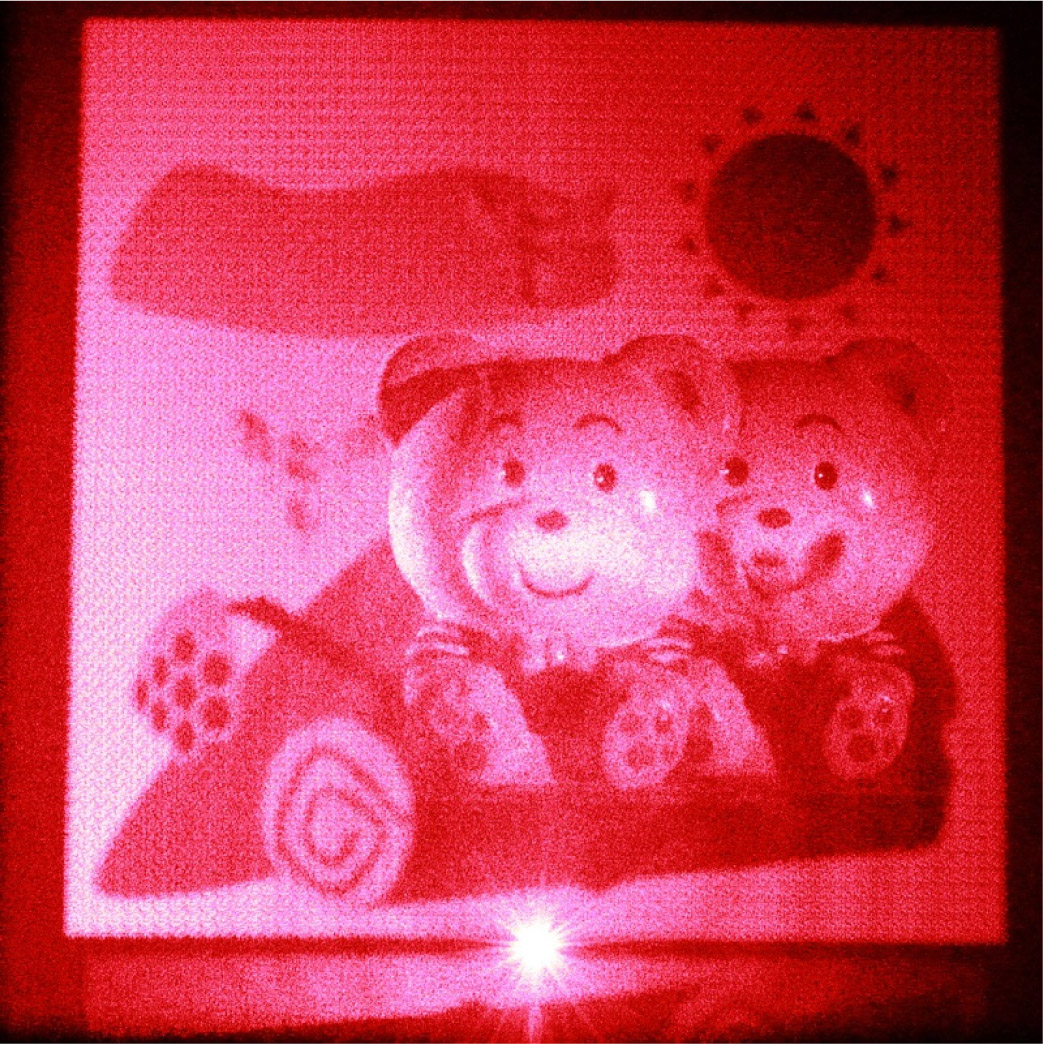 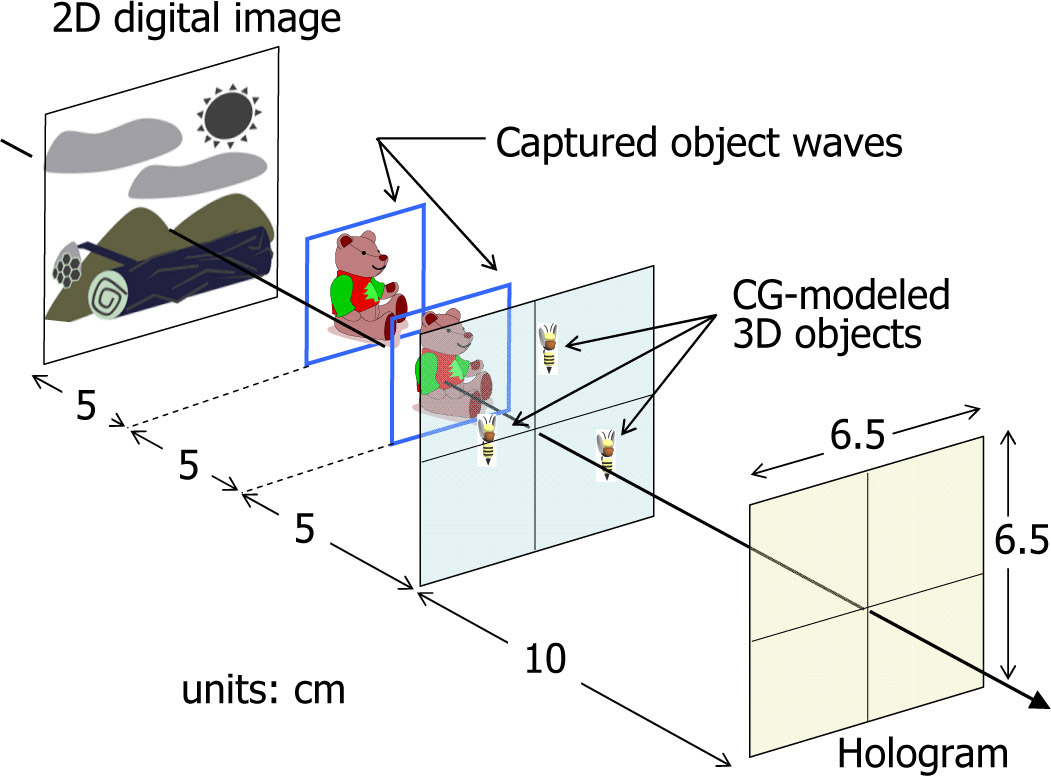 The author would like to thank S. Nakahara for fabrication of the computer holograms. The mesh data for the moai object was provided courtesy of Yutaka Ohtake by the AIM@SHAPE Shape Repository. This work was supported by the Japan Society for the Promotion of Science through a KAKENHI grant (21500114).

Kyoji Matsuhima received his PhD in applied physics from Osaka City University (Japan). He is currently a professor. His research interests include computer-generated holograms, digital holography, and numerical simulations of wave optics.