As the importance of renewable energy sources grows, the development of highly efficient solar cells is increasingly gaining relevance. Today, the most efficient laboratory prototypes for photovoltaics are based on thin-film multilayered structures. These cells have 40% solar-to-electricity conversion efficiency, which is well below the theoretical limit of ∼87% and leaves considerable room for improvement. However, the design of multilayered solar cells can be complicated, and they are susceptible to changes to their operational conditions, such as the cell temperature or the power of the incident sunlight. Hot-carrier solar cells (HCSCs), which offer simplicity of design and greater conversion efficiencies, are an attractive alternative to the multilayer approach.1

Heat production is detrimental to the output of solar cells. It occurs when a material absorbs photons with energies larger than its bandgap. To circumvent this problem, photogenerated charge carriers must be collected through specially designed contacts that are energy-selective. Carriers with large kinetic energies—‘hot carriers’—reach these contacts before losing most of their energy as heat. In principle, efficiencies as high as 86% could be achieved.1 However, since hot carriers normally transfer their kinetic energy to the material in subpicosecond times, the collection through contacts should be fast. This could be achieved under high concentrations of incoming sunlight, the so-called high-injection regime.2 By the same token, under these conditions, a drop in the cell's output voltage takes place, and changes in the cell's temperature interfere with photocurrent collection and heat extraction. Microstructuring HCSCs could help to tackle this problem: it enables these devices to reach electric current densities of ∼kA/cm2 without a significant decrease in their output voltages.3

The performance of an HCSC is further enhanced by converting excess carrier kinetic energy, which is otherwise lost as heat, into electrical work. This can be accomplished using semiconducting thin-film absorbers thinner than 100nm, combined with optical absorption-enhancing structures made either from insulating or metallic materials. The incident sunlight polarizes the insulators or collectively excites the surface electrons of the metals, increasing the absorptivity of the thin films.4

To address the above issues, we developed physical models for HCSC devices and tested them in specially designed semiconductor structures. The tests consisted of optical experiments that measured the interaction efficiency between photogenerated carriers and the semiconductor material used as an absorbent. The carriers have essentially two ways of losing energy: badly designed contacts or interaction with the absorbent material. Theoretically,5 the optimal device configuration is one of energy-selective contacts (see Figure 1). But real contacts cannot be perfectly selective, and our study of the influence of contact selectivity shows that semiselective contacts do almost as well.6 Moreover, information obtained from our physical models,6 together with available experimental data on carrier-absorbent interactions,2,7 suggests that efficiencies above 50% can be achieved using technologically available materials.7 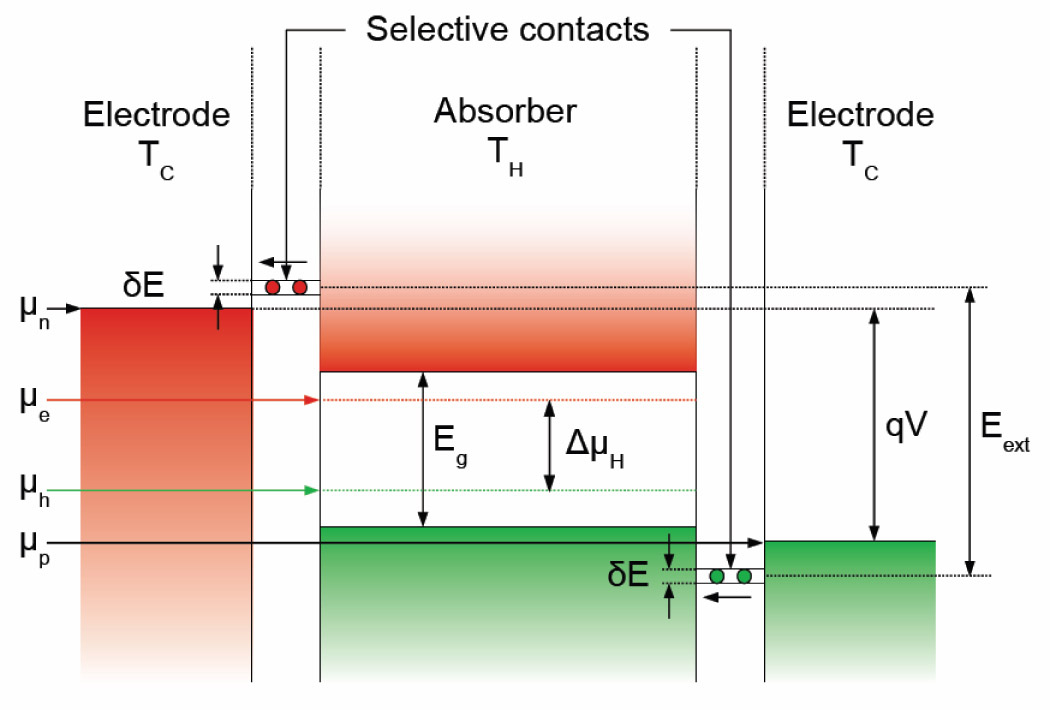 Figure 1. Energy band diagram of a hot-carrier solar cell with bandgap Egand voltage qV. Electron-hole pairs are photogenerated in the absorber and kept hot at a temperature of TH (TH > TC, where TC is the ambient temperature). They are subsequently extracted using energy-selective contacts with a transmission range δE and an extraction energy Eext. The Fermi levels in the electrodes are μnand μp, and the electron and hole chemical potentials in the absorber are μeand μh. The difference μe- μh=ΔμH is known as quasi-Fermi level splitting.

Work we presented at SPIE Photonics West 2011 compares our model to experimental data obtained on reference epitaxial structures, discusses the path to hot-carrier devices, and considers the conversion efficiencies that could be expected from the available technology.8 No working device has yet been made, and our main task for the near future is to produce and test a fully operational HCSC.

Jean-François Guillemoles is research director at CNRS and deputy director of IRDEP, where he heads the research thrust on very high efficiency concepts, modeling, and characterization of photovoltaics