As the largest offshore oil spill in US history, the Deepwater Horizon incident presented an unprecedented threat to the Gulf of Mexico. A system for tracking the oil, both at the surface and at depth, was needed for mitigation and ship survey guidance. We implemented such a system1 immediately at the University of South Florida (USF) by marshaling numerical modeling, observational, and satellite resources from existing coastal ocean observing systems.2

The fate of oil in the ocean depends on many factors, including transport and dispersion by circulation, chemical transformations, and biological consumption. Important information, such as the oil flow rate, was unknown throughout the event. Mitigation activities (dispersants, burning, and skimming) added further uncertainties. To reduce these uncertainties along with inherent model error growth, we used surface oil locations from satellite imagery to frequently reinitialize various models.

Oil tracking in the complex ocean environment begins with a system of ocean circulation models that account for regional flow fields, including the deep-ocean currents embodied by the Gulf of Mexico Loop Current and the shallow-water currents of the continental shelf. All are calculated in a fully 3D, density-dependent manner. The required models were available from different institutions.3–7

Satellite inferred oil locations in each model were seeded with virtual particles. These particles were then advected by the modeled3–7 surface velocity fields. New particles were released at the well site every three hours to simulate continual oil flow. The composite of all such particles contributed to the surface oil's spatial expansion (see Figure 1). 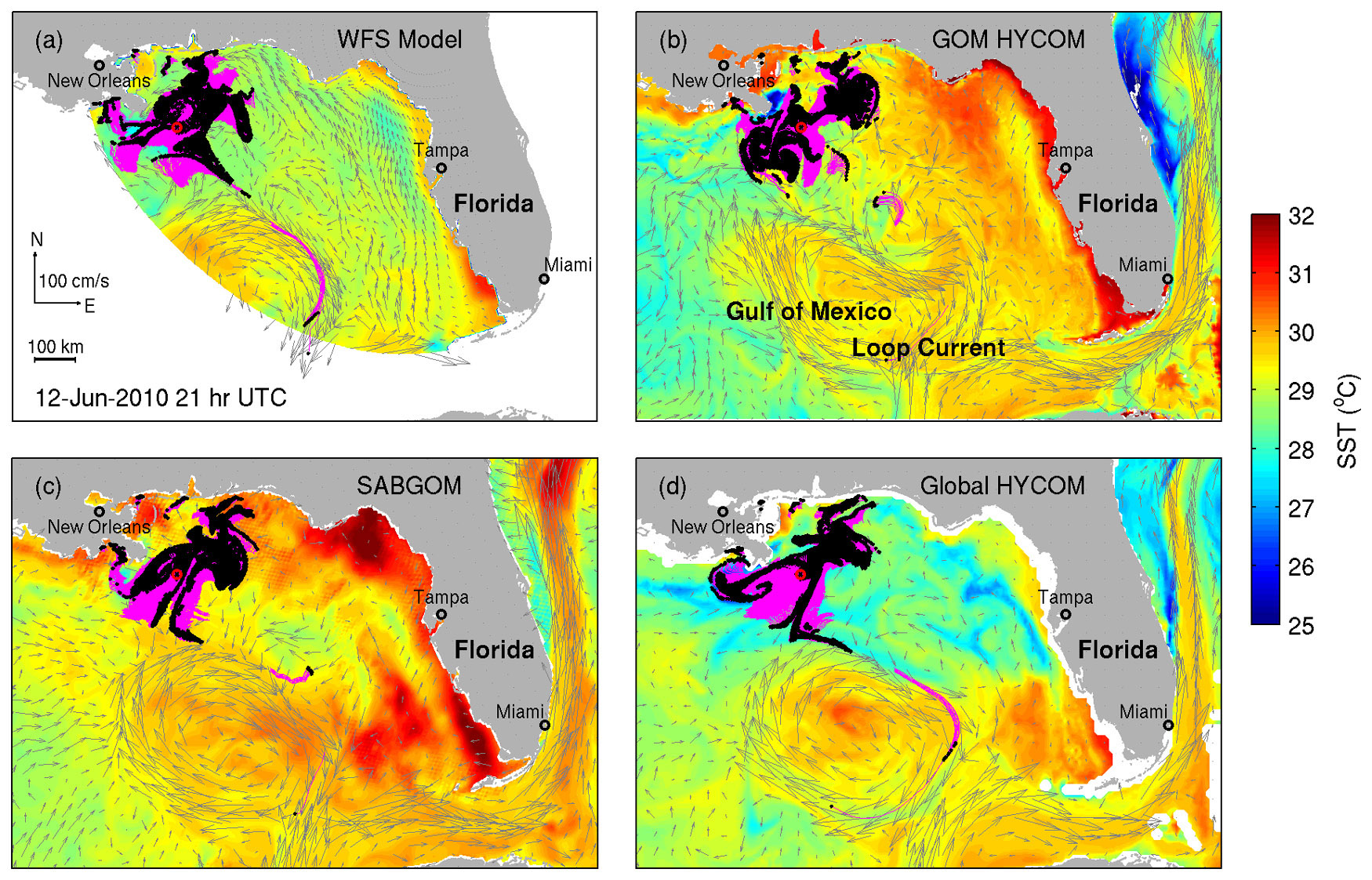 In anticipation of subsurface oil (but with a priori knowledge of depth), we used the West Florida Shelf model3 to track in 3D neutrally buoyant, virtual particles emanating at different depths from the well site (see Figure 2). Despite the lack of observational constraints, as at the surface, the subsurface forecasts were useful.1 The isobath trajectories to the southwest at depth, along with more encompassing trajectories to the northeast higher in the water column, were confirmed by in situ observations.9,10

In summary, a system for tracking oil was immediately implemented for the Deepwater Horizon oil spill by marshaling an ensemble of circulation models and satellite observations. The forecasts were disseminated and used by federal and state agencies responsible for mitigation and public advisories. This rapid response provides an example of how an integrated ocean observing system—as a partnership among academics, agencies, and the private sector—can be of great benefit to the nation.

Since elements of such observing systems already exist, it is essential that these be sustained and augmented so the state of the coastal ocean can be observed and understood to predict the consequences of future natural or man-made events. We are now further testing the veracity of the models with remotely sensed and in situ data, and continuing our long-term efforts towards developing coordinated observing and modeling research in the Gulf of Mexico.

Yonggang Liu is a physical oceanographer at USF. His current research is focused on West Florida Shelf (WFS) circulation and the Deepwater Horizon oil spill. His previous work includes ocean circulation observation in the Asian marginal seas and coastal ocean circulation modeling in the northeast Pacific.

Robert H. Weisberg, distinguished university professor, is a physical oceanographer whose work concerns ocean circulation and ocean-atmosphere interactions within the tropics and the coastal ocean. Emphasis is presently on the WFS and its interactions with both the deep ocean and estuaries.

Chuanmin Hu received his PhD in physics (environmental optics) in 1997 from the University of Miami. He is associate professor at USF's College of Marine Science, where he directs the Optical Oceanography Lab. His research is focused on the bio-optical properties of river plumes, algal blooms, and estuaries using in situ and optical remote sensing techniques.

Lianyuan Zheng, senior research associate in physical oceanography, College of Marine Science, USF, received his PhD in marine science from the University of Georgia in 2001. His research focuses on shelf, coast, and estuary circulation, storm surge, and water quality modeling.