Despite promising preclinical data, most therapeutic trials for TBI performed in recent years have not demonstrated any significant improvement in outcomes.1 Because of this disappointing state of affairs, a plethora of experimental therapies that are not based on standard pharmaceutical agents have been investigated,2 including several physical treatments.3

Low-level laser therapy (LLLT), also known as photobiomodulation, is an emerging therapeutic approach in which cells or tissues are exposed to low-levels of red and near-IR light. Its experimental applications have broadened to include serious diseases such as heart attack,4stroke,5 and spinal cord injury.6 LLLT may have beneficial effects in the acute treatment of TBI by increasing mitochondrial respiration, activating transcription factors, reducing key inflammatory mediators, inhibiting apoptosis (programmed cell death), stimulating angiogenesis, and increasing neurogenesis7 (see Figure 1). 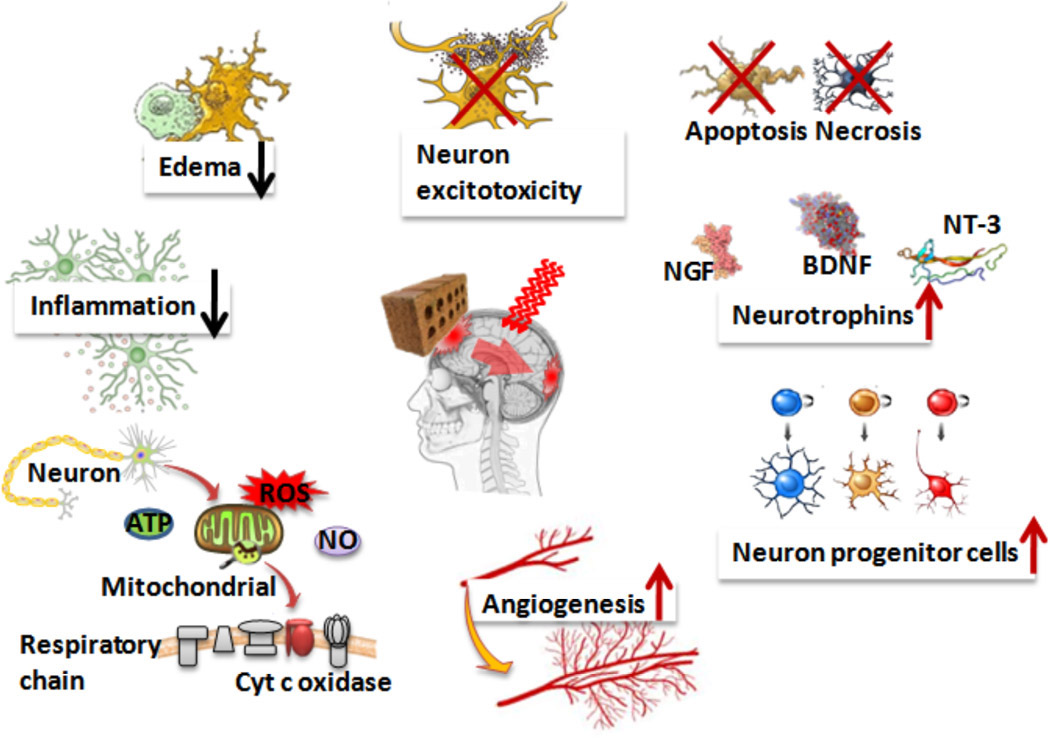 We studied the effect of an 810nm laser on several cellular processes in primary cortical neurons cultured from mouse embryonic brains. We found that at low fluences (0.3–3Jcm2) mitochondrial respiration was stimulated, as shown by the increase in adenosine triphosphate (ATP), Ca2+, and mitochondrial membrane potential. This, in turn, generated low amounts of reactive oxygen species (ROS) and nitric oxide (NO) that activated signaling pathways and gene transcription without causing cytotoxicity (see Figure 2). At 10J/cm2, the stimulation of these parameters was reduced because instead of activating mitochondrial respiration, they damaged enzymes. At 30J/cm2, severe mitochondrial damage occurred, leading to a second large release of ROS and NO and presumably apoptosis and cytotoxicity (although this study did not make those measurements).8 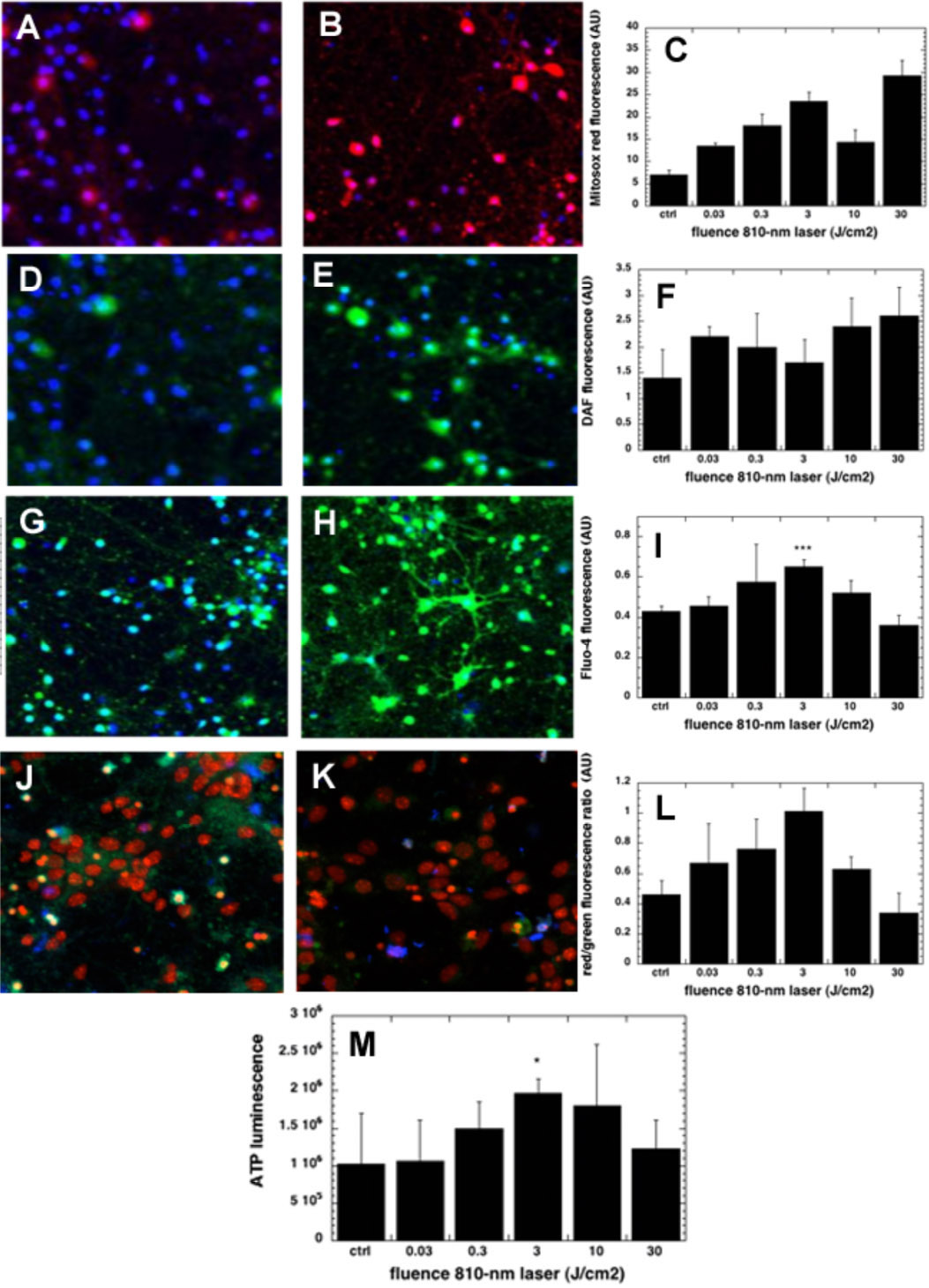 We also tested LLLT in two mouse models of TBI. In a closed head-impact model, the scalp is opened surgically and a weight dropped onto the exposed skull followed by scalp closure. We tested four different laser wavelengths using exactly the same laser parameters in each case (spot-size, fluence, and irradiance). The data in Figure 3 show that beginning on day 5 for the 810nm laser and day 9 for 665nm one, there was a significant difference in the neurological severity score (NSS) of the LLLT group compared to the control. The improvement became relatively larger and more significant as time progressed. Although there was a trend towards improvement at middle time points, with the 980nm laser it never became significant and in the case of the 730nm laser there was no improvement at all.9 The controlled cortical impact model involves opening the scalp and using a trephine to create a craniotomy and expose the dura. A hydraulic piston was then used to form a controlled lesion in the cortex. Figure 4 shows LLLT may reduce the brain damage area (stained withtriphenyltetrazolium chloride) at three days. 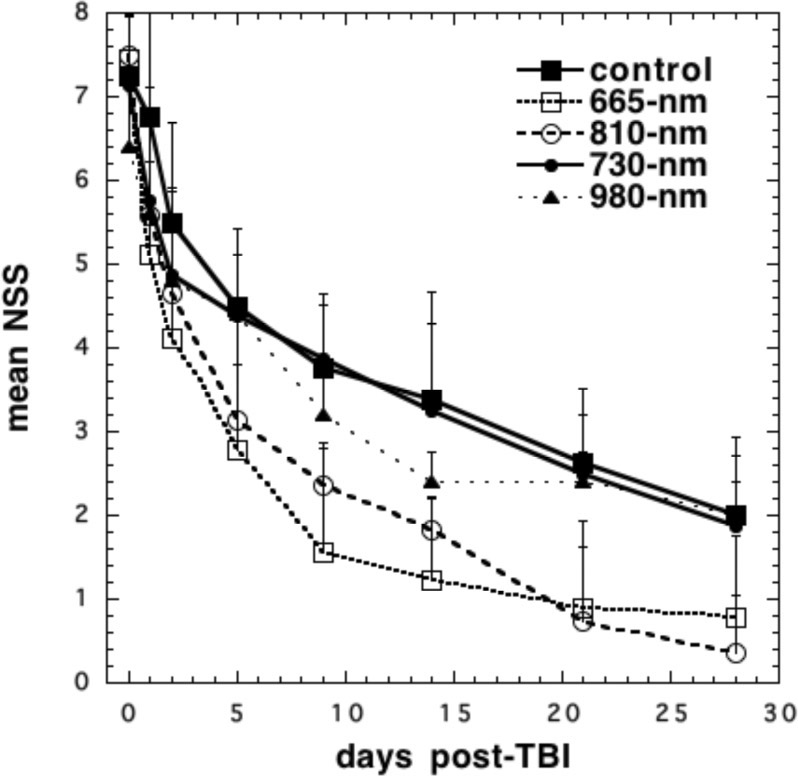 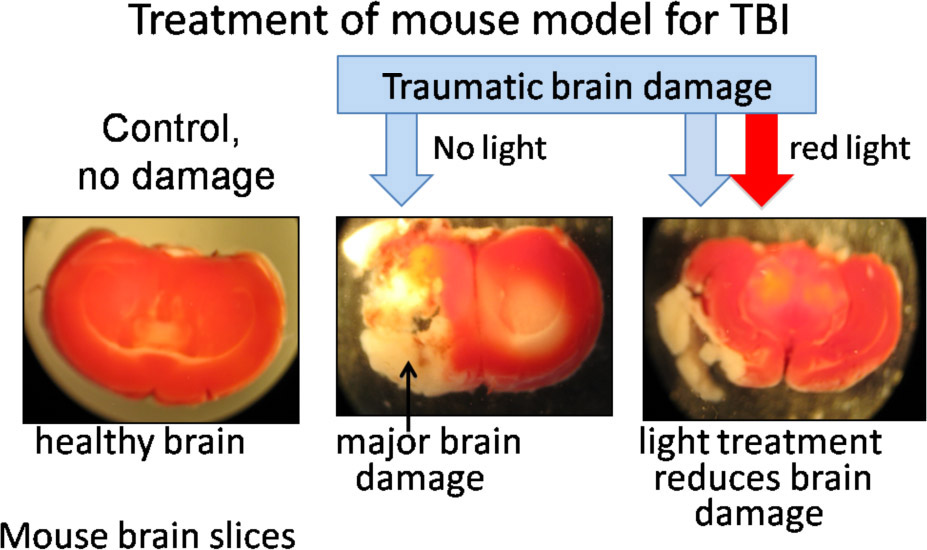 The remarkable effects of LLLT in remedying central nervous system (CNS) damage in a non-invasive manner with little evidence of any adverse side effects suggest that its application will only increase. Advances in understanding the molecular and cellular basis for red and near-IR light on cells and tissues will only serve to increase the acceptance of LLLT by the medical profession at large. If LLLT can make even a small contribution to mitigating the loss of life, suffering, disability, and financial burden caused by CNS disorders, the research efforts will be worthwhile.

Michael Hamblin is a principal investigator at the Wellman Center for Photomedicine at MGH and an associate professor of dermatology at Harvard Medical School. His research program in photodynamic therapy and low-level laser therapy is supported by the National Institutes of Health, Congressionally Directed Medical Research Programs, and Center for Integration of Medicine and Innovative Technology. He has published more than 125 peer-reviewed articles.