A high-power LED is not a ‘plug and play’ light source because it requires electrical, thermal, and optical management. Unlike the first two, optical management remains difficult to implement because a regular high-power LED emits light in all forward directions (half-space: see Figure 1). With such a light distribution, it is impossible to build an efficient directional-lighting device because only a small fraction of the light is directed to the area of interest. 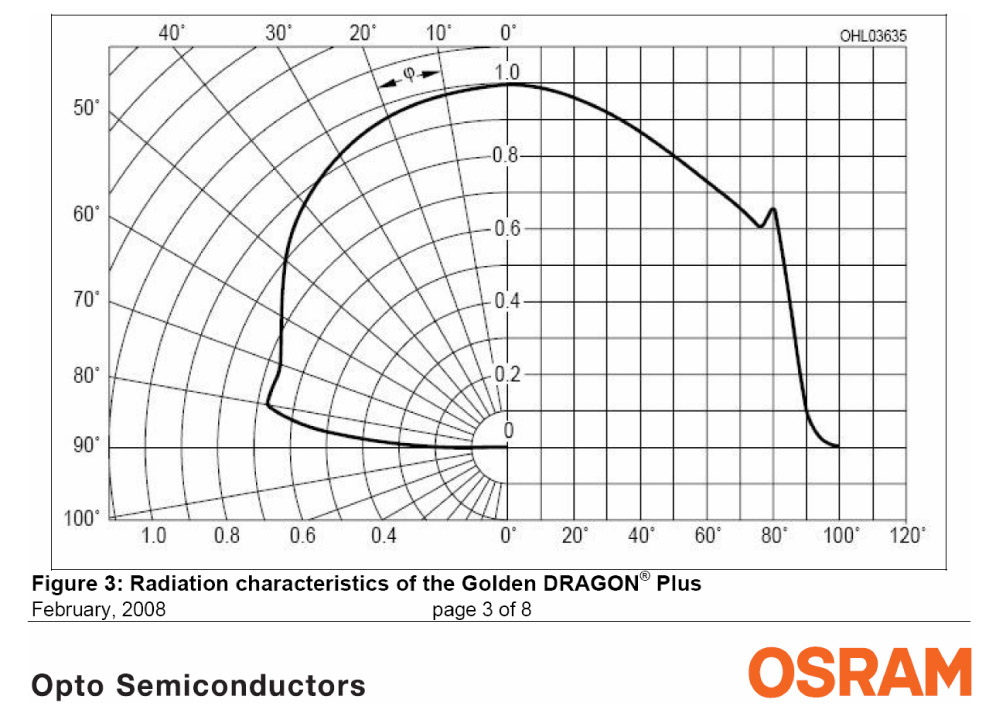 Figure 1.Intensity distribution of a high-power LED, the Golden Dragon Plus manufactured by Osram.2Light is emitted everywhere in half-space, from -90°to +90°.

A LED collimator solves this problem. A collimator is an optical component (usually made of plastic) that generates a parallel (collimated) beam out of a compact light source. It includes a central area that works in transmission and a peripheral area that works as a total internal reflector (see Figure 2). 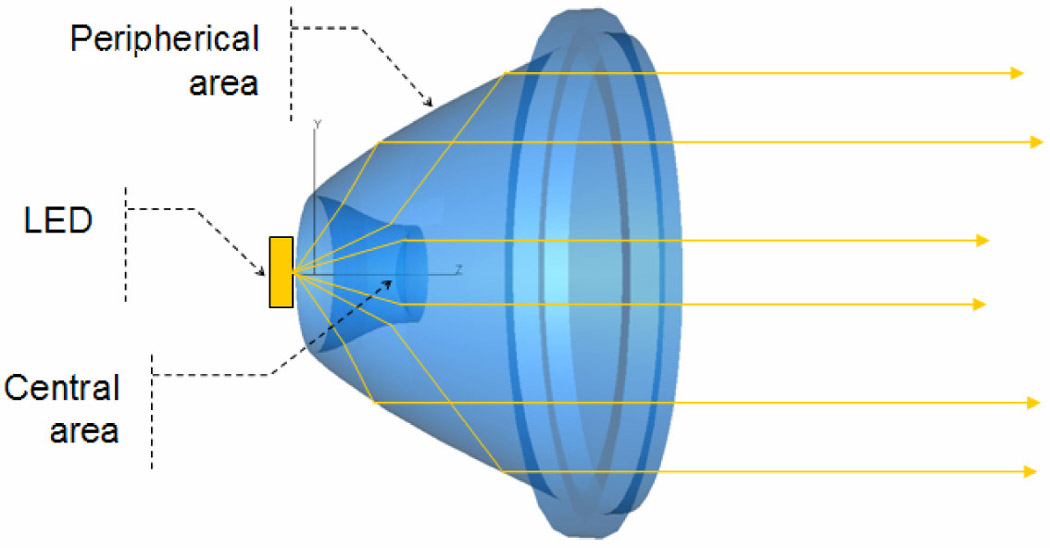 There are, however, limitations to a collimator, the most important of which being the so-called ‘etendue’ law. This is a fundamental physical law that states that, for any light beam, the beam cross-section multiplied by the intensity distribution is a constant value, which depends only on the light source. Consequently, any optical system that reduces the beam angle of a light source also increases the beam diameter proportionally.1 Since real optical systems with geometrical aberrations or diffusion tend to increase the beam spread, the ‘etendue’ law can be seen as a lower limit for these systems.

Another limitation is the existence of light losses. A small fraction of the light is absorbed by the bulk material, usually 1% or 2% for acrylic. In addition, some light is lost on the optical surfaces of the collimator. Each time light travels through a transparent surface, a small fraction of it is reflected instead of transmitted. These losses usually represent around 4% per surface.1 Consequently, the light transmission of collimators is typically between 80% and 90%. The limitations described here have to be taken into account in the design of these devices.

Regular collimators have five rotationally symmetric optical surfaces: input and output surfaces for the central area; and input, reflective, and output surfaces for the peripheral area. Therefore, five ‘optical parameters,’ one per surface, have to be defined by the optical design. This is typically done in two steps. The first, which defines two of the ‘optical parameters,’ consists of generating a parallel ray fanned out of a single-point light source (see Figure 3). The second step is performed by using a real physical model of the light source that takes near field and far field into account. This calculation requires a photometric simulation software since it cannot be done analytically. By numerically optimizing the light output, we can define the three remaining ‘optical parameters’. 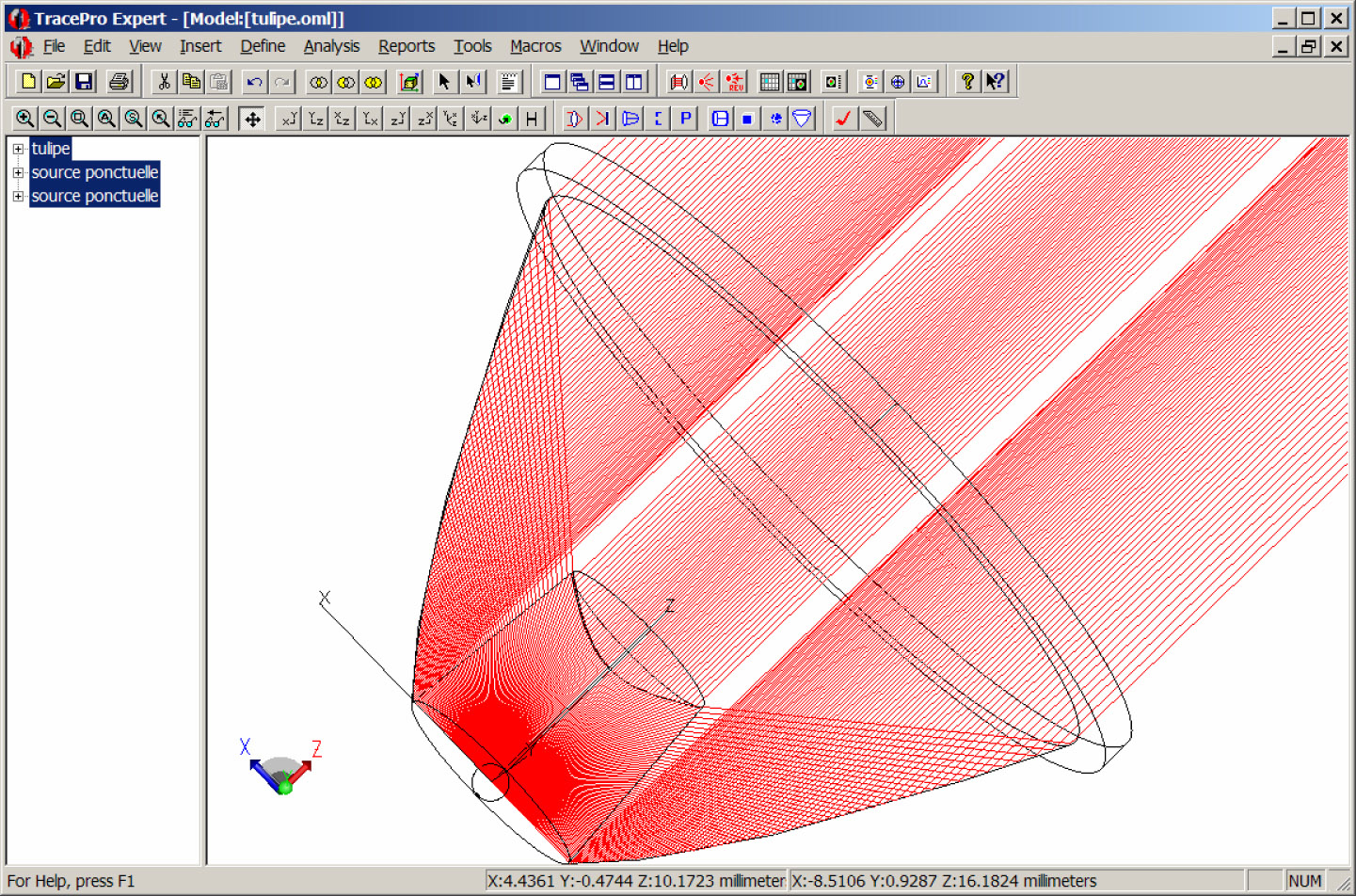 We developed a custom optimization macro program that can optimize the shape of the five optical surfaces. Not only does it focus a ray fan from a single point light source, but it also compensates field aberrations to be as close as possible to the etendue theoretical limit. The result is enhanced light homogeneity and improved light concentration for narrow beams.

In our collimators, about 85% of the output light comes from the peripheral area that works in total internal reflection, meaning that this area is always the most critical. Only 45% of the output light is contained within the full width at half maximum (FWHM) that characterizes the beam angle. Hence, the complete light distribution is always much larger than the FWHM.

Regular collimators are, however, not free from drawbacks. Unlike a regular reflector, a collimator displays the image of the LED chip. This side effect, which can be corrected, is solely due to the central area that behaves like an imaging lens and it will always occur in narrow beams. Another limitation is that we see a satellite ring around the main beam. This ring is three orders of magnitude weaker than the peak intensity but, due to the logarithmic response of the eye, it is visible in the dark. This defect is caused by a reflection loss on the input surface that is sent back into the main beam. It can be reduced or smoothened but it cannot be removed.

Manufacturing is another key issue. The roughness of the optical surfaces of an LED collimator has to be lower than 10nm, otherwise light losses may occur. In addition, the optical-surfaces' shape accuracy has to be between 10μm and 50μm peak-to-valley depending on the surface, otherwise the beam spread may increase and homogeneity defects can occur. The centering and the focusing are also critical, since a positioning tolerance greater than 0.2mm is likely to lower on-axis intensity and generate a non-rotationally symmetric beam.

Our facility is equipped with a four-axis, state-of-the-art, diamond-turning machine. We use this equipment to manufacture mold cores and to generate optical surfaces with λ/6 accuracy (where λ is the wavelength of light) and 2nm roughness. Thanks to this level of precision, we are able to reach the quality level needed to manufacture real optical components, including collimators.

In summary, a collimator is not a ‘regular’ plastic component. It is a complex combination of optical surfaces, and it requires a high level of quality. Although it represents a small percentage of the total cost of ownership in any lighting device, it is the key component that shapes the light. In the future, we plan to develop off-the-shelf hybrid reflectors that will combine the technical benefits of collimators and the economical benefits of reflectors in an innovative and modular optical concept.

Jean-Pierre Lauret is a senior optical engineer whose main focus is the design and development of Gaggione's LEDnLIGHT products and custom-optics projects. He did his graduate studies at the Institut d'Optique Graduate School in France.