Continuous-wave (CW) terahertz (THz) technology has long interested astronomers because approximately half of the total luminosity and 98% of the photons emitted since the Big Bang fall into the submillimeter (THz) and far-IR regimes. Submillimeter astronomy is the prime technique to unveil the birth and early evolution of a broad range of astrophysical objects. It is a relatively new branch of observational astrophysics that focuses on studies of the cold universe, i.e., objects radiating a significant (if not dominant) fraction of their energy at wavelengths from 100μm to 1mm. THz-continuum observations are particularly powerful to measure the luminosities, temperatures, and masses of cold, dusty objects. Examples of the latter include star-forming clouds in the Milky Way, prestellar cores and deeply embedded protostars, and protoplanetary disks around young stars, as well as nearby starburst galaxies and dust-enshrouded high-redshift galaxies in the early universe. In THz astronomy, high-power CW local oscillators (LOs) driving multipixel heterodyne receivers at key frequencies (e.g., at 1.4, 1.9, and 2.7THz) could be deployed on space-based and suborbital platforms.1

THz waves have been notoriously difficult to generate and, consequently, this remains a relatively unexplored part of the electromagnetic spectrum. They also do not propagate far through the atmosphere, except in narrow transmission bands at selected frequencies. CW THz sources are highly desirable for a wide range of applications, from THz astronomy to spectroscopy, biosensing, and security and quality inspection in various industries, as well as for medical and pharmaceutical purposes. Many attempts have been made to fill the elusive THz gap (see Figure 1). On the low-frequency side, up to around 0.8THz, electronics-based sources have been successful, although their output power falls off rapidly with increasing frequency (see Figure 1). On the other side of the gap, fundamental physics limitations forces cryogenic operation of quantum-cascade-laser THz sources, since they have to overcome kT (∼26meV at room temperature, where k is Boltzmann's constant and T denotes temperature) to achieve population inversion. They typically emit poor beams (without addition of plasmonic-waveguide structures) with broad spectral lines, while performance drops off significantly below 3THz. 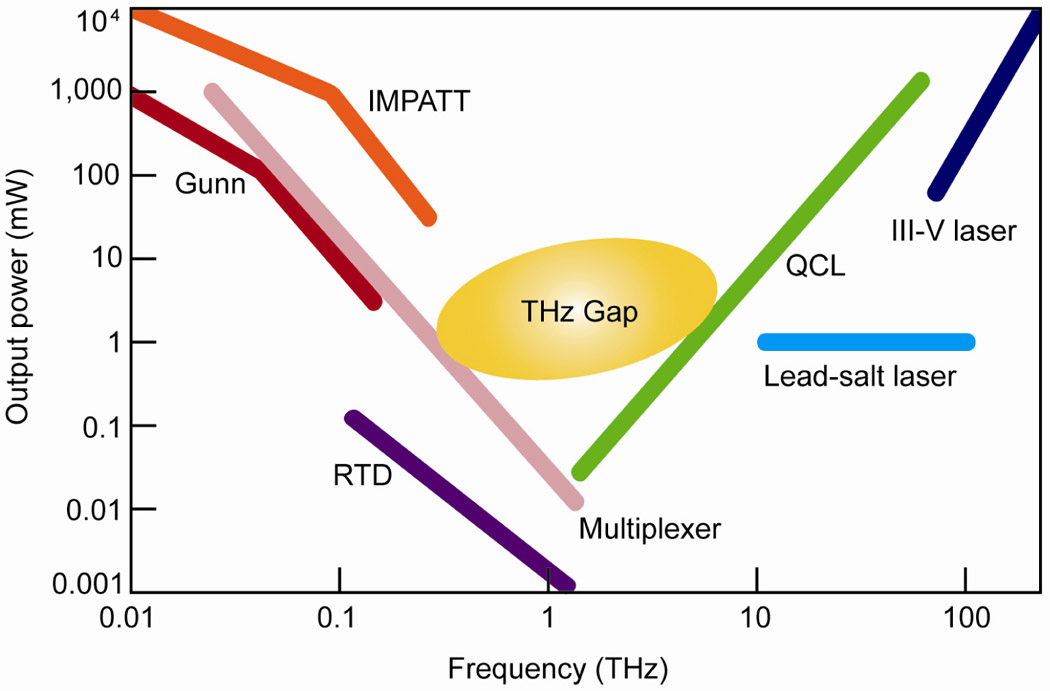 Our THz external-cavity surface-emitting-laser (TECSEL) source, operating at room temperature, is based on intracavity difference-frequency generation using a periodically poled lithium niobate crystal.2 Different nonlinear crystals can be employed in the cavity and designed for either collinear or noncollinear phase matching. The IR dual-wavelength, high circulating power is generated using an intracavity etalon placed in a high-finesse vertical-external-cavity surface-emitting laser (VECSEL) cavity. Dual-wavelength emission is facilitated by spectral-hole burning in the very broad gain of the host semiconductor medium, enabling generation of THz frequencies from 0.1 to 5THz and beyond. The choice of circulating IR wavelength is arbitrary, and the VECSEL chip can be designed either for IR, visible, or mid-IR emission to minimize intracavity losses and optimize THz extraction. Figure 2 shows the TECSEL cavity and breadboard setup for a noncollinear phase-matching geometry.

Figure 2. Illustration of the setup. The pump laser is directed by mirror M3 to the vertical-external-cavity surface-emitting laser (VECSEL)'s surface. The curved and flat mirrors M1 and M2, and the VECSEL chip, form the laser cavity. A Brewster window (BW) and an etalon are placed within the resonator to ensure generation of linearly polarized emission at two wavelengths. The two laser modes mix inside the nonlinear crystal (NLC) and generate THz radiation. THz waves are emitted from the crystal surface and collimated by a cylindrical THz lens. (b) Photograph of our setup. 1: Semiconductor VECSEL device. 2: Etalon. 3: BW. 4: M1. 5: NLC. 6: M2. 7: Cylindrical THz lens. 8: Head of the pump laser. 9: Circulating IR laser mode.

Our measured intrinsic linewidth is less than 1MHz, making it ideal as a local oscillator (LO) and/or spectroscopic source. We have already demonstrated that this source can generate milliwatt power levels at 0.825 (remote detection of explosives), 1, and 1.9THz (LO for an astronomical THz receiver). Figure 3 shows a direct comparison of the power output for the 1 and 1.9THz sources, showing quadratic power scaling with increasing pump power and frequency. 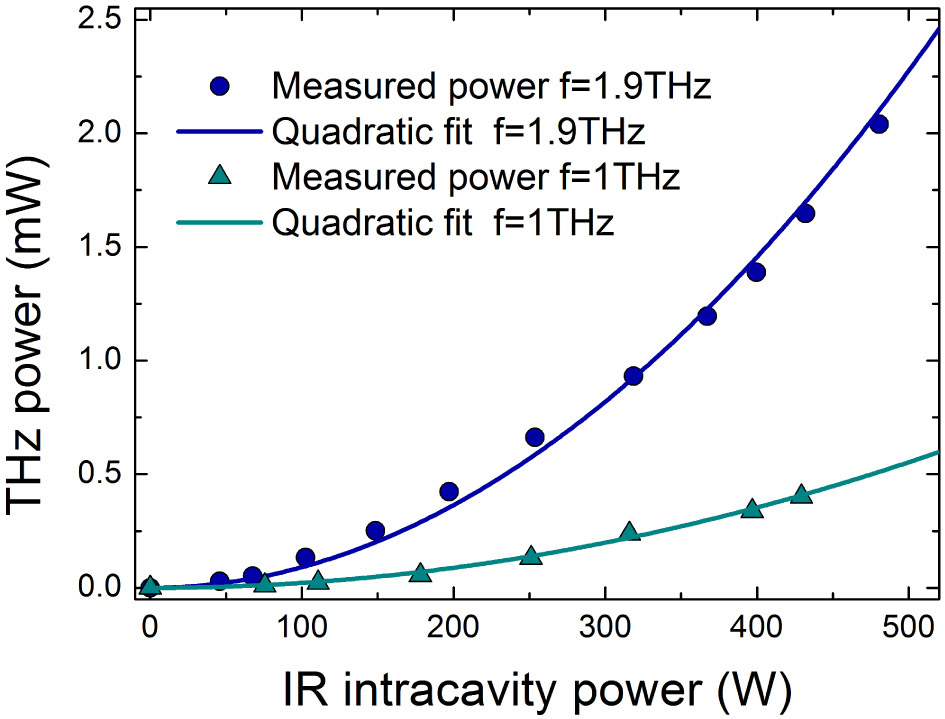 Figure 3. Measured THz output power as a function of the total intracavity power of both IR modes. f: Frequency.

For astronomical applications in particular, our TECSEL source could potentially serve as the LO to drive mixer arrays of ∼100 or more pixels, dramatically increasing the scientific return from suborbital and space-based observing platforms. Recent advances in device fabrication, micromachining, low-noise amplifiers, and digital-signal processing have significantly driven down the cost per pixel of heterodyne arrays. LO power currently determines the possible array size. The number of pixels a heterodyne receiver can have and, consequently, how much of the sky can be observed within a given period of time scales linearly with LO power. Therefore, continued development of VECSEL-based THz sources could significantly reduce required mission lifetimes and cost. We are currently collaborating with both the Steward Observatory Radio-frequency Laboratory (SORAL) at the University of Arizona and TeraVision LLC (Tucson, Arizona) to test our TECSEL source as both an LO at 1.9THz and a remote spectroscopic source for detection of explosives.3 Many common explosives have unique spectral signatures within the relatively inaccessible spectral window between 0.8 and 3THz. A CW narrow-line source can reveal high-resolution spectroscopic features that are not observable with time-domain THz spectroscopy.

In summary, our room-temperature TECSEL source delivers milliwatt-level powers with sub-MHz linewidth in a clean Gaussian beam at any targeted frequency within and outside the THz gap. Further development is needed to optimize the source, minimize thermal effects in the VECSEL chip and nonlinear crystal, and further scale the emitted THz power. For example, we know that at least 50% of the THz power emitted into the NLC is currently absorbed. Our patented technology covers a broad landscape of TECSEL configurations, including collinear difference-frequency generation in transparent NLCs. Moreover, the TECSEL can be operated in pulsed mode to generate extremely high peak THz powers for time-domain-spectroscopy applications.

Our TECSEL 1.9THz source development has been funded by NASA Phase 1 and 2 Small Business Innovation Research (SBIR) contracts to Desert Beam Technologies, while 0.825THz source development was funded by a National Science Foundation Phase 1 SBIR. The authors acknowledge discussions with and support from Christopher Walker of SORAL, and Christian d'Aubigny and Abraham Young of Teravision LLC (Tucson, Arizona).

Jerome Moloney is a professor of optical sciences and mathematics at the University of Arizona and a partner in Desert Beam Technologies LLC. His research interests include theory and experimental study of semiconductor lasers, ultrafast extreme nonlinear optics, and computational photonics.

Mahmoud Fallahi is a professor and a partner in Desert Beam Technologies LLC. His research interests are in semiconductor lasers, integrated optics, micro/nanofabrication, and polymer/hybrid components.

Maik Scheller received his Dipl-Ing degree in electrical engineering from the Technical University of Braunschweig (Germany) in 2008. He is currently pursuing a PhD degree. His research interests include nonlinear optics, THz systems, and signal processing.

Stephan W. Koch has been a professor of physics at Philipps University Marburg and a research professor at the Optical Sciences Center of the University of Arizona since 1993. He is also a partner in Desert Beam Technologies LLC. His fields of major current interests include condensed-matter theory, optical and electronic properties of semiconductors, many-body interactions, disorder effects, quantum confinement in solids, coherent and ultrafast phenomena, semiconductor-laser theory, microcavity effects, and optical instabilities and nonlinearities.

Martin Koch is a professor of physics and a partner in Desert Beam Technologies LLC. His research interests include ultrafast spectroscopy of semiconductors, semiconductor physics, and THz-systems technology.