The laser-based optical trap has been instrumental in a broad range of investigations of small particles in liquids, gases, and vacuum.1,2 The field has enabled, for example, manipulation of bacteria and viruses, cooling and trapping of atoms, and precise measurements of bioparticle properties.2 However, optical trapping instruments have traditionally been bulky, involving many optical elements (e.g., microscopes). Recently, waveguide-based, on-chip optical manipulation has emerged as an inexpensive and compact alternative.3–10 We have conducted unique optical manipulation, trapping, and sensing applications using an optofluidic chip based on liquid-core antiresonant-reflecting optical waveguide (ARROW) technology.10

The low refractive index core is surrounded by specific high-index dielectric layers that enable light and liquid to be confined in the same volume: see Figure 1(a). This key feature allows fluorescence detection with single-molecule-level sensitivity.10 We developed an integrated optofluidic platform to interface liquid- and solid-core ARROWs (see Figure 1) to detect single bioparticles on a chip.10 In addition, due to the small waveguide cross sections (typically 12×5μm2), the quasi-single-mode optical fields have high intensities and can manipulate small particles (100–2000nm in diameter). The response of a particle under irradiance of a given color is determined not only by its physical properties but also the beam's optical power and spatial area. We can exploit this sensitive particle behavior to extract information about an optical system. For example, a particle's optically induced trajectory within a liquid-core ARROW can be used to characterize the waveguide loss (the loss of light from the core).5The main advantages of this technique are its simplicity and nondestructive nature. 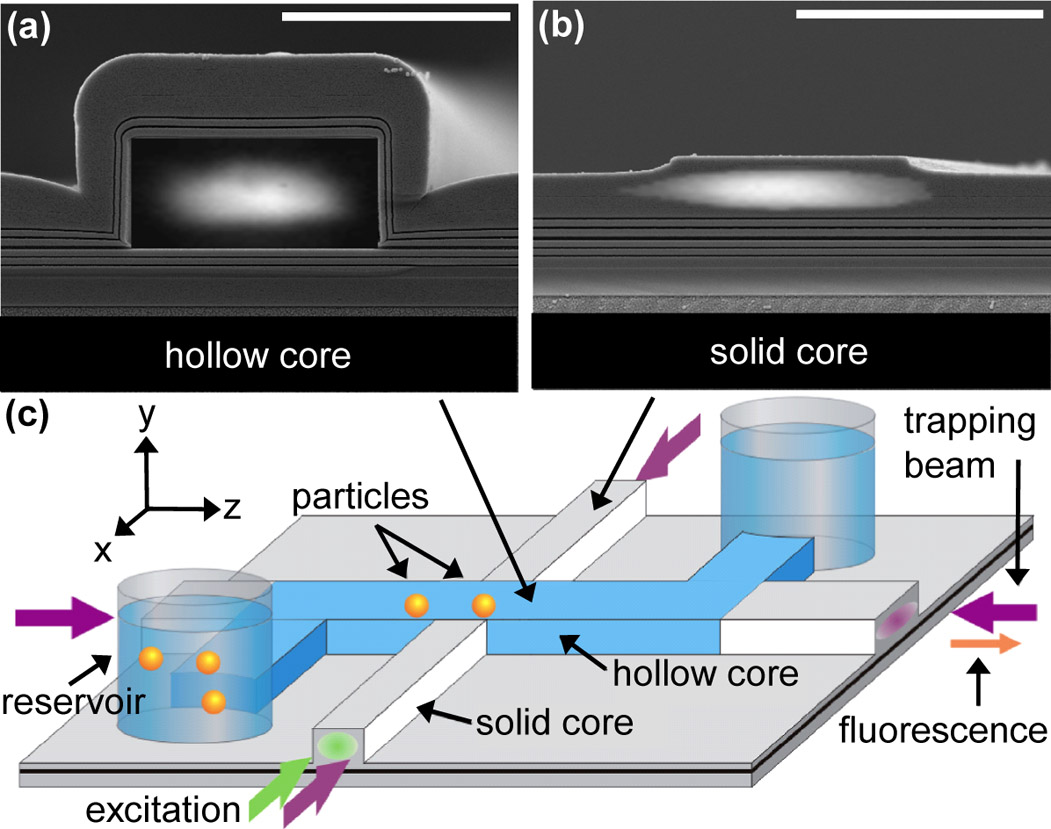 Introducing a counter-propagating beam (see Figure 1, trapping beam) makes it possible to optically trap particles by balancing the optical forces—called gradient or scattering forces—exerted on them.1 Traditionally, the setup involves asymmetric beam divergence with single- or dual-beam configurations.1,2 However, we can also manipulate particles using optical-power variations, such as waveguide loss,5,6 to determine how the optical trap behaves. We demonstrated this loss-based trap by capturing latex beads and E. coli bacteria in a liquid-core ARROW6 (see Figure 2). The advantages of this new type of optical trap are its ability to confine particles at any point in a liquid core and to use the chip's waveguide loss to design the trapping regions. For example, we have shown a method to locally increase the concentration of fluorescent nanoparticles by optically confining many particles.9 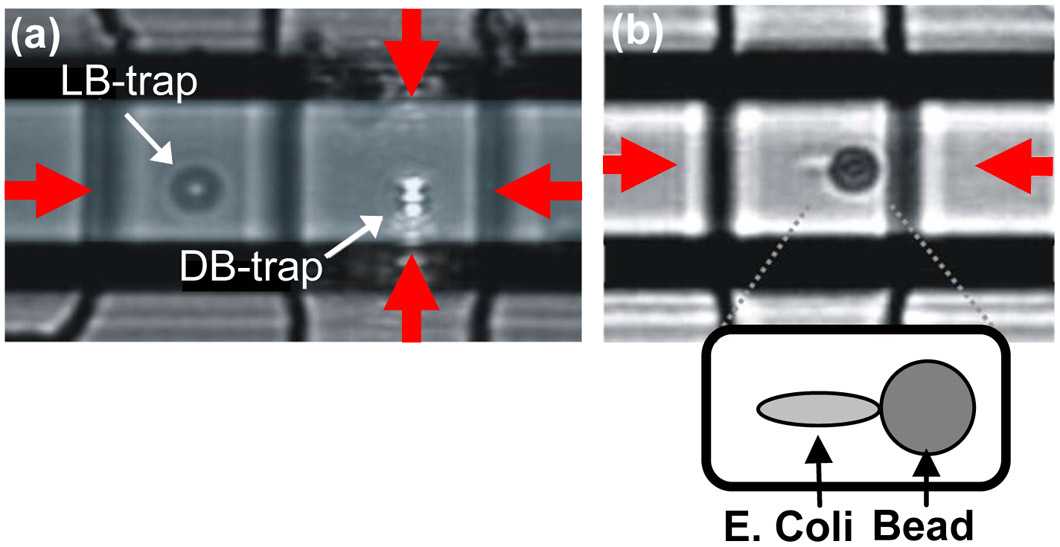 Figure 2. (a) Particles trapped in loss-based (LB) and divergence-based (DB) traps on an optofluidic chip. (b) A trapped E. coli bacterium attached to a latex bead.

The ability to manipulate and trap particles on a chip can also be exploited for optical sensing. The efficiency of a liquid-core waveguide to collect light is determined by the location of the light source. Thus, a control or guiding beam can be used to effectively draw particles to the liquid-core center, where the coupling efficiency for emitted light is highest. We proved this principle using a guiding beam to confine fluorescent microbeads to the center of a liquid-core ARROW and consequently doubled the number of detected particles.7

In summary, different combinations of radiation pressure in a liquid-core waveguide can be applied to move particles in a fluidic channel, trap them at desired points, and even analyze the waveguides themselves. In future work, we intend to apply this platform to optically control particle sorting or tailor the trapping position using waveguide loss. As these techniques continue to mature and more innovative applications are discovered, on-chip optical-particle manipulation will reach its full potential.