High-power lasers and their applications on the battlefield

The dream of a weapon that can instantaneously destroy targets from a remote distance is becoming true. Development of a high-energy laser weapon is currently considered tactical as well as strategic. It is as a part of a general layered defense system against ballistic missiles and short-range rockets (the ‘space-age’ weapon). Why are laser beams so attractive? Unlike regular light bulbs, laser beams have unique characteristics, such as narrow bandwidth, as well as high brightness and coherence, so that they can be concentrated onto a small area and generate catastrophic failures of incoming missiles.1

Gas or solid-state lasers, including fiber lasers, are candidates for powerful laser sources. Gas lasers—such as hydrogen or deuterium fluoride (HF/DF) light sources—or chemical oxygen-iodine lasers (COILs) achieve lasing through chemical reactions. COILs are strategic airborne weapons (Megawatt-class lasers) that emit at a wavelength of 1.315μm. The COIL system is also referred to as an airborne laser, since it is carried on a Boeing 747-400F freighter aircraft (see Figure 1). It already achieved destruction of Scud missiles. An advanced tactical (kW-class) laser version, mounted on an aircraft, was recently tested successfully. 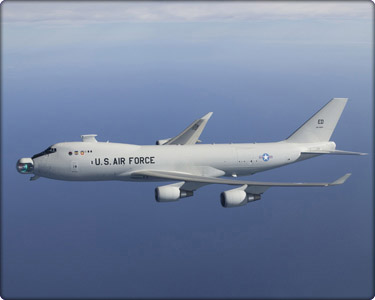 Figure 1. Boeing 747-400F equipped with an airborne chemical oxygen-iodine laser that is capable of destroying ballistic missiles in their boost phase. The nose-mounted turret is the laser-beam exit. (Courtesy: Northrop-Grumman.)

A second type of gas laser is the HF/DF chemical laser, with emission in the 2.6–3.3μm and 3.5–4.2μm wavelength ranges, respectively. In recent years, DF lasers managed to produce 1MW output power at 3.8μm. Other DF versions of ≈100kW output power are ground-based, mobile, or airborne, all for targeting short-range rockets. Operation of chemical lasers is limited by the available reactants that serve as its ‘ammunition.’ They are also corrosive, hazardous, and have a large footprint. Our team obtained atmospheric-pressure operation of chemical lasers (such as HF) by using various preionization technologies. In our research, we found that using a novel design of plasma-cathode preionized HF laser yielded, for the first time, an efficient room temperature atmospheric pressure chemical laser. Solid-state lasers (SSLs) seem to overcome the limitations of HF/DF lasers and are presently considered as a future tactical antimissile, antirocket, and antimortar laser weapon. Instead of using chemical reactants that are mixed together, SSLs are based on solids (crystals or crystalline ceramics) doped with rare-earth ions—such as neodymium (Nd3+) or ytterbium ions (Yb3+)—and pumped by powerful diode lasers. They are compact, mobile, modular, and capable of generating multiwavelength emission, with simple logistics owing to the absence of toxic gases. However, like COIL, they are limited by atmospheric transmission. 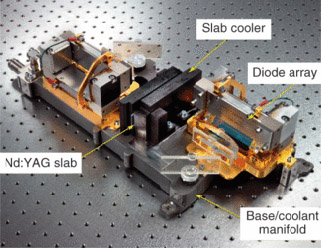 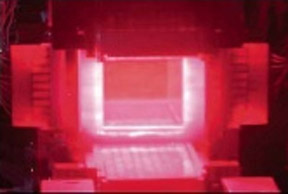 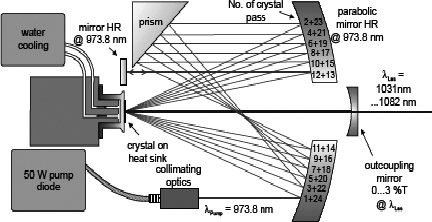 Fiber lasers represent another type of efficient source, because they are compact, modular, and exhibit reduced thermally induced effects. Companies such as IPG Photonics5 have reported operation of a 10kW single-mode output-power Yb3+-doped silicate fiber laser at a wavelength of ≈1μm, with excellent beam quality. Using a beam combiner, up to ≈50kW multimode output power can be obtained. At present, approximately 3kW power can be delivered to a target at ∼1.2km by the Naval Research Laboratory.6 Our future efforts include development of a tunable 100kW free-electron laser, multi-kW laser-diode stacks, and ultrafast SSLs aimed at creating nonlethal alternatives in various scenarios using dynamic-pulse detonation.