Laser ablation is a common technique for removing surface material from a target with pulsed laser light. The most familiar example is LASIK surgery, in which ophthalmologists use laser pulses to selectively remove material from a patient's cornea to correct impaired vision. The technique has many industrial applications, including surface cleaning, etching, precision hole-drilling, surface hardening, and more. Our research investigated the atomic-level thermomechanics and revealed mechanisms of picosecond (ps)-pulsed laser ablation that may lead to new applications for the technique. Computer simulation is an ideal tool to explore these atomic-level processes: for our research, we used 3D molecular-dynamics software developed in-house.

In a metal, laser energy is absorbed by conduction electrons close to the target surface, in the ‘skin’ layer, with a depth on the order of 10nm. The excited electrons diffuse quickly into the target, while simultaneously imparting their energy to surrounding atoms. The electron-atom coupling time, τ, characterizes the time after which the electron-and-atom systems have reached thermal equilibrium. For aluminum, τ≅3ps. By that time, the electrons have diffused to a heated depth of dT=50nm.1 In this region, a zone of hot, thermally equilibrated material is created.

The heated zone produces localized high-compressive stress within the material and attempts to expand. If ultrashort pulses are delivered to the material in less than the material's characteristic electron-coupling time, there will be insufficient time for that stress to spread and the material to relax. For example, given a velocity of sound in a material vsound=5km/s, the time needed to dissipate that stress is equivalent to the acoustic response time, dT/vsound=10ps. This state of stress confinement is characteristic of ultrashort pulses: processes occurring after comparatively long laser irradiation, say of nanoseconds, do not exhibit stress confinement, but are purely thermal in nature.

The high compressive stress induced by the laser-induced heating eventually dissipates throughout the material when the heating stops. For a thin film—one with a thickness d≤τvsound3—in which temperature and pressure profiles are homogeneous, the relaxation occurs via acoustic oscillations of the film. During the oscillation phase of tensile pressure, the material may fragment if it is loaded beyond the yield strength, as shown in Figure 1. This mechanism is usually called thermomechanical spallation. For a metal, spallation happens in the molten state, but for materials with a higher triple-point temperature (relative to the critical temperature of the liquid-gas phase transition), ablation may occur in the solid state.4 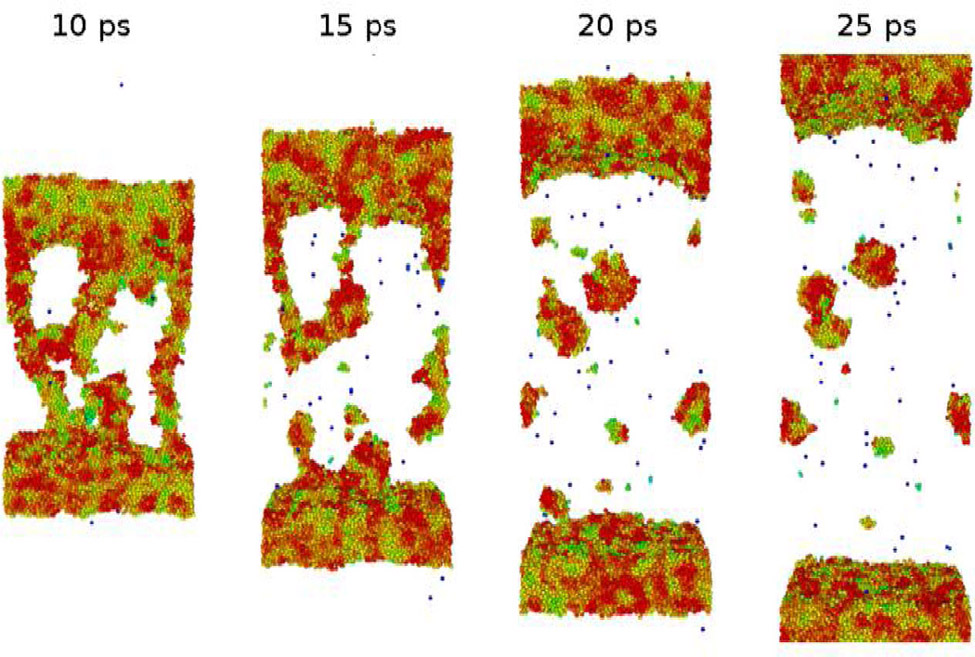 In a thick film (one whose thickness is larger than a few times the heated depth) and in a semi-infinite solid, laser pulses do not heat the material homogeneously but establish regions with strong temperature and pressure gradients after the electron-atom coupling time τ. These gradients initiate a wave in the material. The region of high compressive stress close to the surface will start a compressive wave running into the film; it is followed by an unloading tensile wave. In this unloading wave, ablation may occur for the same reason as in a thin film, that is, by mechanical fracture. Figure 2 shows a close-up view of the ablation process in the unloading wave for the case of a thick (semi-infinite) copper target. Notice how the tensile pressure in the region of the void is relaxed after spallation occurs in the molten phase. 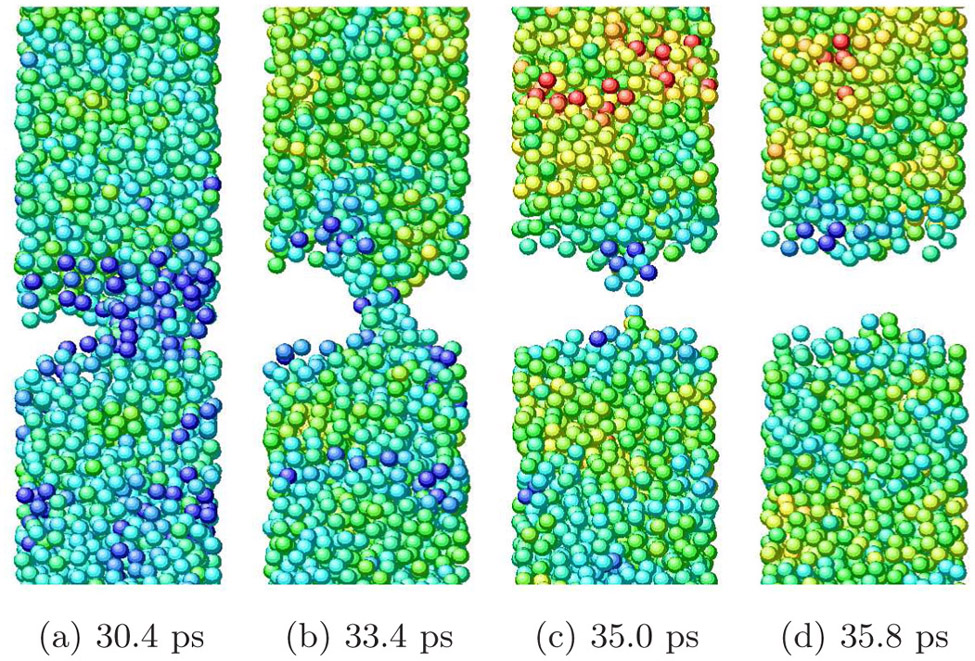 For laser fluences (flux over time) considerably above the ablation threshold, the mechanical process of spallation may change towards a thermal process, termed phase explosion or explosive boiling. This term describes the situation where the system enters the spinodal or stability limit situated within the liquid-gas coexistence region. Here the material is thermodynamically unstable; instantaneous decomposition of the system into two phases, liquid and gas, results. In a molecular dynamics simulation, this happens on the time scale of picoseconds. In our scenario, it means that the energized liquid expands until it fragments into a mixture of atoms and liquid droplets or clusters. See Figure 3 for the case of highest energization. Phase explosion also occurs for longer laser pulses and is then characterized by a higher percentage of atoms rather than clusters.7 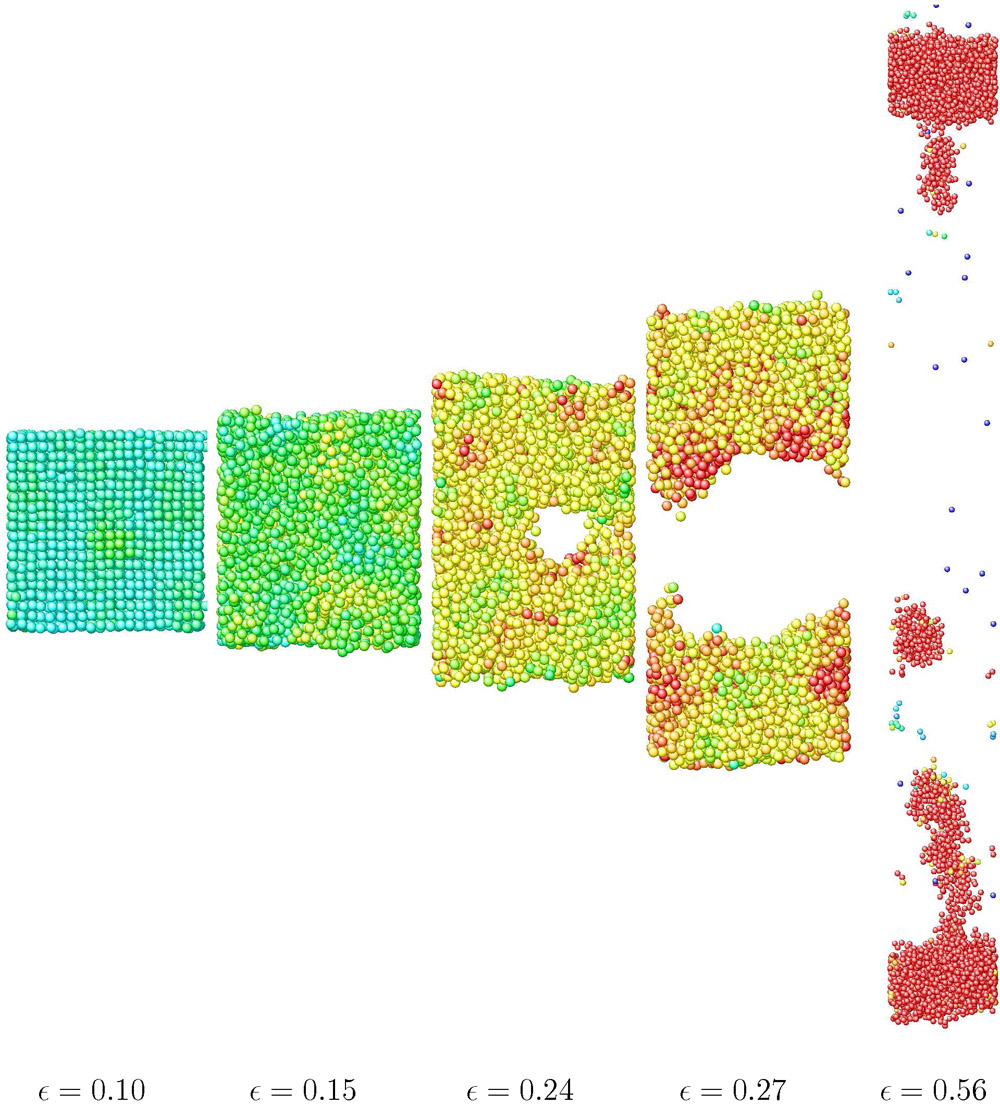 Figure 3. Series of snapshots of a thin aluminum film featuring the materials processes occurring after laser irradiation. Fluence is indicated with the help of the energization ∊=E0/Ecoh, where the energy absorbed in the material per atom, E0, is normalized to the material cohesive energy, Ecoh. Colors denote the local temperature and increase from blue to red; green characterizes the melting point. The subplots visualize from left to right the effect of increasing energization: crystalline solid; molten; temporary void formation; spallation; and cluster formation.6 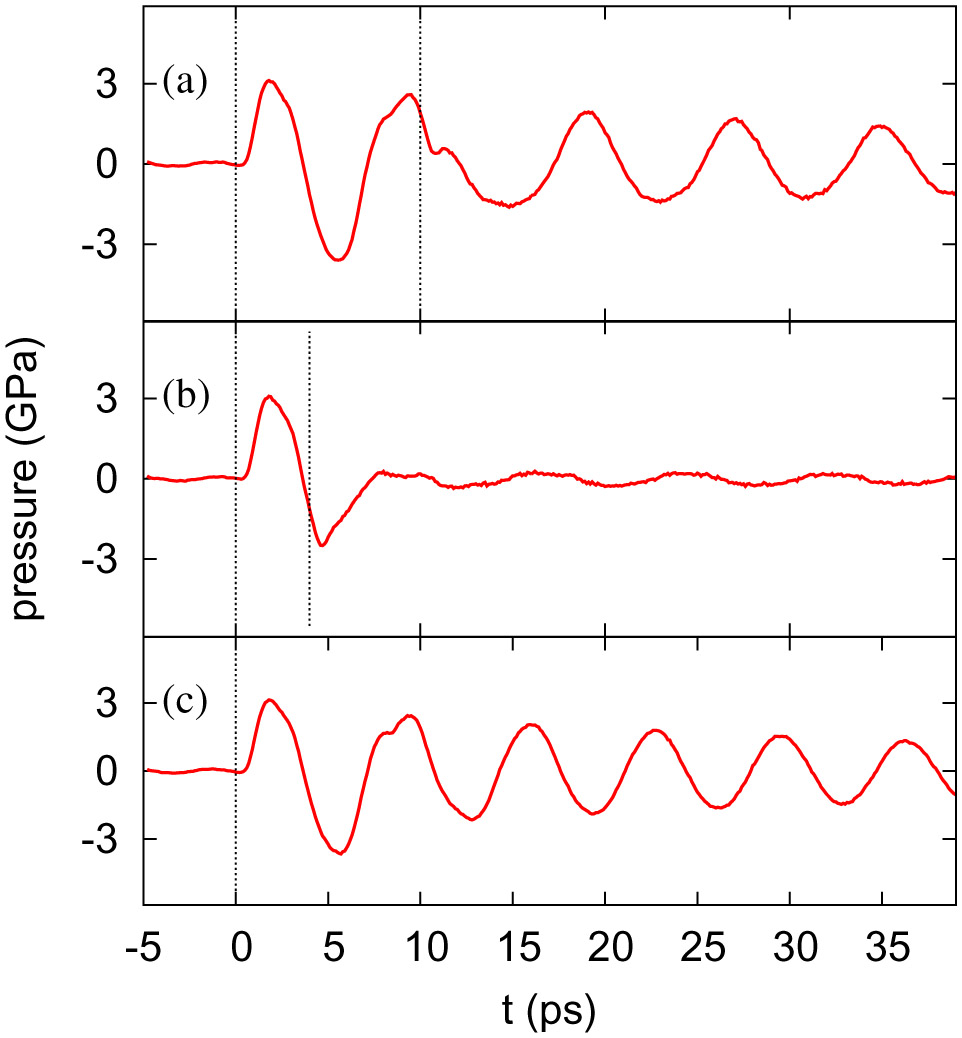 Figure 4. Time evolution of pressure in a thin Al film irradiated by a double pulse with time delay δ=10ps (a) and 4ps (b). (c) shows the pressure after a single pulse (time delay δ=∞). Vertical dotted lines mark the start of the second (delayed) laser pulse. Compressive (tensile) pressure has positive (negative) values.2,8

In fact, recent experiments have demonstrated that irradiation of a sample with two identical pulses may lead to less ablation than with a single one of these pulses.9 The mechanism for this phenomenon may be that the second laser pulse is absorbed in the ablation plume generated by the first pulse rather than in the target. As a consequence, part of the ablation plume of the first pulse is re-deposited on the surface, reducing the ablation depth to values below that of a single pulse.

Current research in this field aims at understanding how sequences of laser pulses—and also temporally tailored pulses—can be used to modify the laser-metal interaction and to allow for new modes of precision sculpting of materials.

This work was supported by the BMBF (grant no. FSP 301 FLASH).

Herbert Urbassek received a PhD on ion-surface interaction in 1983. Since 1993, he has been professor of applied physics at the University of Kaiserslautern. His specialities include laser-surface interaction, ion and cluster impacts, and nanomechanics.

Yudi Rosandi received a PhD in 2008. His specialties include ion- and laser-surface interaction.