Applications of liquid crystals in chemical and biological detection

Daunting technical challenges of cost, operational simplicity, response time, sensitivity, specificity, and environmental robustness pose barriers to the development of real-time, affordable chemical and biological monitoring systems that will be broadly useful to both the private sector and governments. Environmental exposure to hazardous agents in the air that we breathe and the water that we drink, whether accidental or intentional, is a frightening certainty. We are addressing these challenges by developing a sensor technology based on innovative use of nematic liquid crystals (NLCs). It combines (bio)chemically functionalized interfaces with NLCs to provide the basis for a sensor platform with a small footprint (<5mm diameter) for portability, reversible response for real-time monitoring and constant surveillance, direct visual indication or easy integration into optical or electronic reporting systems, easy operation, and low manufacturing costs. This combination of attributes makes NLC sensors attractive for a range of applications whose adoption is currently inhibited by the cost or complexity of other technologies.

NLCs have traditionally been used in displays and other electro-optical devices, where their orientation is manipulated by the application of an external electric field.1 In recent years, significant advances in unconventional applications have been achieved in photonics,2 as well as in chemical and biological sensors.3–5 Here, we describe two applications of NLCs for detection of vapor-phase chemicals and biological entities. Interfaces functionalized with select chemical or biological entities promote NLC alignment in predetermined orientations (perpendicular or parallel to the interface) that are primarily dictated by local interactions. When these interfaces are exposed to target analytes, the interactions are perturbed and the NLC film undergoes orientational transitions from perpendicular to parallel alignment or vice versa. This can be detected by monitoring the NLC film between crossed polarizers (see Figure 1). To showcase the breadth of this technology, we demonstrate sensitive detection of dimethyl methyl phosphonate (DMMP) vapor in the part-per-billion (ppb) range and rapid detection of vesicular stomatitis virus (VSV) following an incubation time of 10min.

Figure 1. Principle of nematic-liquid-crystal (NLC)-based sensors for detection of analytes. (a) A surface is functionalized with receptors that align a thin NLC film in a predefined orientation. (b) Upon binding of the target analytes at the solid/NLC interface, the target molecules induce an orientational transition that can be detected by monitoring the film between crossed polarizers.

A DMMP sensor consists of a microstructured, gold-coated glass substrate that is functionalized with a self-assembled monolayer of 11-mercaptoundecanoic acid and coated with a thin layer of aluminum perchlorate salt. A micrometer-thick NLC film supported on this substrate initially assumes perpendicular (homeotropic) alignment—see Figure 1(a)—and the film appears dark between crossed polarizers: see Figure 2(a). When the sensor is exposed to the test environment, the DMMP molecules diffuse through the thin film to bind to aluminum ions (Al3+) on the surface. They displace the NLCs at the interface by their interaction with the Al3+ on the surface to reorient NLC molecules parallel to (or tilted from) the substrate: see Figure 1(b). The NLC film now appears bright between crossed polarizers: see Figure 2(b). This response can be quantified by measuring the intensity of transmitted light through the NLC film. Figure 2(c) shows the selective detection of 125ppb DMMP relative to vapors of toxic industrial compounds and environmental components, including humid nitrogen. This tolerance to potentially interfering compounds, especially humidity, is one attribute that differentiates NLC-based sensors from many existing alternatives. 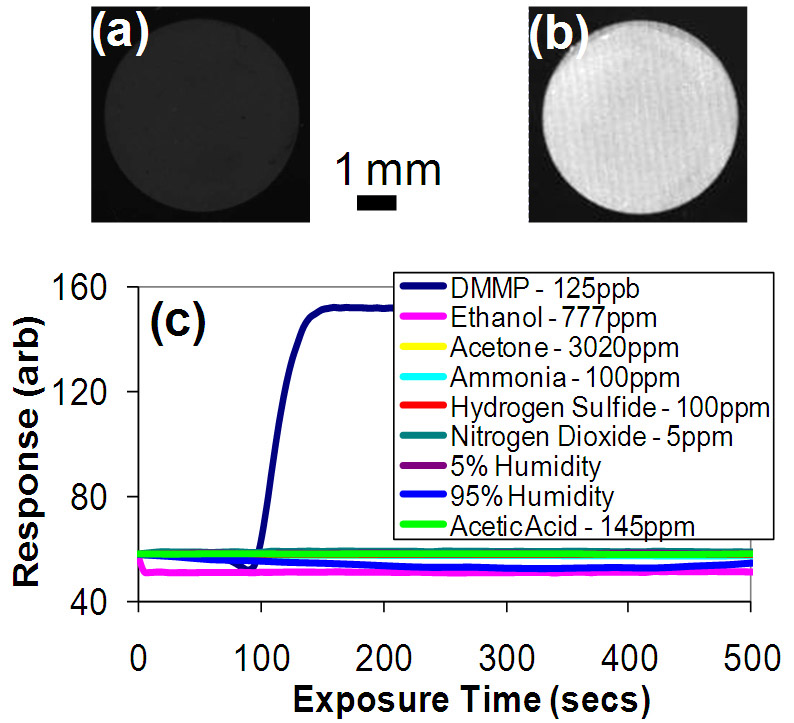 Figure 2. Detection of dimethyl methyl phosphonate (DMMP) using NLC-based sensors. Optical appearance (between crossed polarizers) of a DMMP sensor (a) before and (b) after exposure to DMMP. (c) Selective detection of DMMP against potential interfering compounds. arb: Arbitrary units. ppm: Parts per million.

When NLCs are brought into contact with interfaces decorated with lipids or lipid assemblies, NLC/lipid interactions lead to distinctive (e.g., homeotropic) NLC orientations.6 This sensitivity has been exploited to detect, amplify, and report the presence of biological assemblies comprised of lipid moieties such as VSV, an enveloped virus with a lipid bilayer. We used di-electrophoresis to rapidly transport a virus sample to an antibody-functionalized surface for detection with NLC. We prepared quadrupolar electrodes separated by a 20μm gap using conventional photolithography. The junction between the electrodes (i.e., the active area) is functionalized with antibodies that do or do not recognize (i.e., control antibodies) glycoproteins that comprise the VSV envelope. When the antibody-functionalized substrate is exposed to a 10μl sample containing VSV—in the presence of an AC electric field (peak-to-peak voltage: 10Vpp, frequency: 3MHz) applied for 10min—the virions are transported to the active area containing the antibodies.

Next, we paired the surface on which the virus is captured with a silane-coated glass substrate, and filled the cavity between the two surfaces with NLC to fabricate a ∼2μm-thick NLC cell. Figure 3(a) shows that the active area functionalized with antibody specific to VSV and subsequently exposed to the virus induces homeotropic NLC alignment and appears dark between crossed polarizers. In contrast, when treated with nonspecific antibody (i.e., a control antibody), the active area aligns NLC parallel to the surface, and the film appears bright between crossed polarizers: see Figure 3(b). The NLC orientation induced by the presence of VSV is caused by interactions of NLCs with the lipid envelope of the virus. This principle also permits detection of different concentrations of VSV in aqueous samples: see Figure 3(c). Note that—from an extremely small (10μl) sample volume—we can detect 2000 plaque-forming units of the virus. With further optimization of the substrate and enrichment conditions, this limit could be significantly improved to permit detection of lower virus concentrations. We will continue our research along these lines. The ability of lipids to promote homeotropic alignment of NLCs at interfaces also permits detection of other lipid-containing biological assemblies including E-coli bacteria and West Nile virus in crude samples, such as tissue homogenates of infected crows. 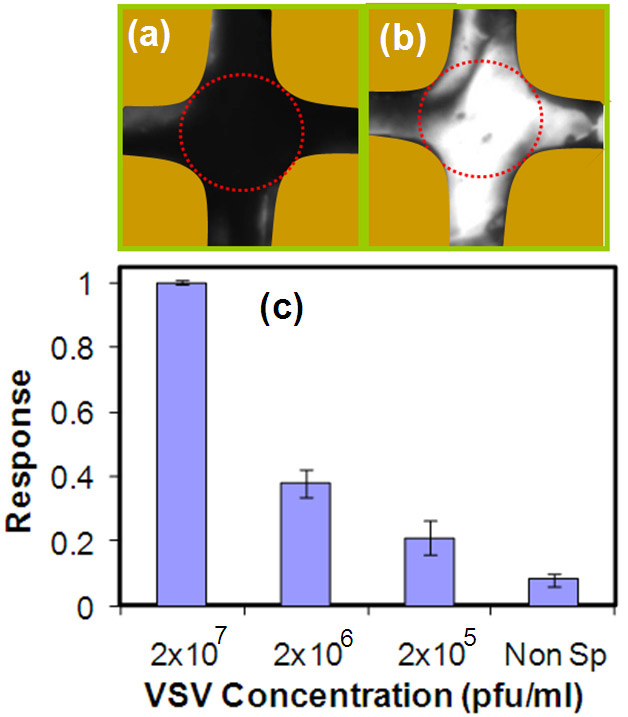 Figure 3. Detection of enveloped viruses using NLCs. Optical appearance of an NLC film (between crossed polarizers) supported on a substrate functionalized with antibodies (a) specific or (b) nonspecific (Non Sp) to vesicular stomatitis virus (VSV) and subsequently exposed to the virus. The gold-colored pads are four gold electrodes for application of an electric field. The red circle represents the 20μm-diameter active area. (c) Concentration dependence of the response (i.e., area with homeotropic alignment normalized with respect to the active area). pfu: Plaque-forming units.

This research was partially supported by the Defense Advanced Research Projects Agency (contract W31P4Q-04-C-R319) and by a National Institute of Environmental Health Sciences grant. The author would like to thank Nick Abbott of the Department of Chemical and Biological Engineering at the University of Wisconsin-Madison and Avijit Sen, Heidi VanTreeck, Bart Grinwald, Kurt Kupcho, Michael Bonds, and Barbara Israel for stimulating discussions and suggestions.