Ground-based telescopes have always had a major problem to contend with: the motions of the atmosphere. Even when located on high mountains, telescopes still view the sky through a thick layer of continuously moving air. It is air turbulence that causes stars to twinkle. Above the atmosphere, the stars glow with a steady, undistorted light. That is why astronomers began launching some of their telescopes into space.

Meanwhile, astronomers committed to ground-based telescopes found a way to counter the effects of atmospheric turbulence: adaptive optics (AO). With such systems, a laser beam—a ‘guide star’—is projected into the atmosphere above the observatory (see Figure 1).1 The beam is deflected continuously by atmospheric turbulence. Instruments analyze these slight beam variations and ascertain exactly how the atmosphere is moving from one moment to the next. With that information, a computerized system makes adjustments to the surface of the telescope mirror to correct the paths of the identically distorted light rays arriving from stars and other celestial objects. The resulting images rival those obtained by space-based telescopes. 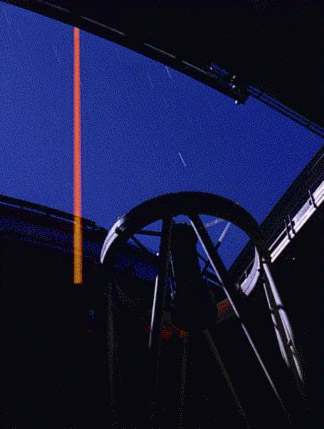 Figure 1. The ‘guide star’ laser beam is projected upward from the side of the Shane telescope.

The first AO systems were developed by the military in the 1970s and 1980s. When the results of laser-guide-star research became available to the astronomical community, Lick Observatory began developing a system that could be used on its own telescopes. AO systems originally used large, deformable glass mirrors. Hundreds of small electric or magnetic actuators were glued to the back of the mirror. The actuators received data from the guide star and used it to make small adjustments to the mirror surface. One AO system was developed for the 3m Shane telescope atop Mount Hamilton, near San Jose (California). This system became the prototype for that installed on the two Keck 10m (diameter) telescopes on Mauna Kea in Hawai'i.2

The early AO systems worked well, but they were bulky and expensive. Our team at Lick believed that a smaller, less costly system was possible, so we set out to devise one for the Shane telescope. This telescope has been at the forefront of research in astronomy for more than 50 years. Notably, it was one of the first (and most productive) telescopes used for the discovery of extrasolar planets, i.e., planets beyond our solar system.

We are now developing a new AO system for the Shane telescope. This system incorporates significant advancements in AO technologies that have been achieved over the past decade. It seeks to both produce high-resolution images and increase the width of the wavelength bands covered by the AO system. Most notably, we have applied micro-electromechanical-systems (MEMS) technology to AO. MEMS devices, also referred to as micromachines, are less than 1mm in diameter. MEMS technology breaks through a cost and complexity barrier that now makes very-high-order AO corrections with compact systems feasible for research observatories. The MEMS system for Lick was developed in collaboration with the Boston Micromachines Corporation. This joint effort resulted in development of a system using a single, tiny deformable mirror. A prototype was installed on the Lick 1m (diameter) Nickel telescope in October 2007.3,4

The MEMS device that will be used on the Shane telescope has a 32×32 array of actuators, each capable of deforming the reflective mirror surface by approximately 3μm. The actuator grid is mapped to the 3m telescope aperture, so that the incoming light waves are corrected on scales of 10cm, which is fine enough to coherently rephase the atmospherically distorted starlight to wavelengths as short as the mid-visible regime (λ = 0.5μm).

Figure 2 shows a photograph of the MEMS deformable mirror and a schematic of how it operates. Electrostatic forces conveyed by conductors (red) make microscopic adjustments to a membrane (blue) that, in turn, pulls on a continuous mirror surface (orange) attached to it by very tiny posts (green). Each blue rectangle represents a single actuator. The device is fabricated using a silicon micromachining process, where epitaxial layers of amorphous silicon are sequentially grown and intermediate areas etched away to form the gaps for mechanical actuation. Figure 3 shows how the mirror corrects a star image in the 1m telescope's testbed system. Light ordinarily scattered over approximately 1 arcsecond (full width at half maximum) on the image is gathered into ∼0.1 arcsecond (the diffraction limit of the 1m telescope), making the image both sharper and brighter with respect to the background.

Figure 2. An adaptive-optics (AO) deformable mirror corrects the aberrations of starlight through microscopic adjustments to its reflective top surface. Silicon-wafer micromachining technology has been used to fabricate micromirrors controlled by more than a thousand electrostatically driven actuators.

Figure 3. A prototype AO system based on micro-electromechanical-systems technology was installed on the Nickel 1m (diameter) telescope in October 2007. An image of the star αArietis obtained with this system (inset left) is much more compact than one produced without use of AO (inset right). The spike in the main image is a 3D graphical representation of the star's intensity as viewed with the AO system.

In the AO system for the 3m Shane telescope, the diffraction limit is three times sharper and the contrast is expected to be nine times greater. This degree of precision will enable extraordinary correction of the J, H, and K astronomical near-IR wavelength bands (mapped to atmospheric-transmission centered near 1.2, 1.6, and 2.2μm, respectively). It will also allow for some correction of visible bands at shorter wavelengths, from 0.5 to 1.0μm. Compared to the previous system, which only usefully corrects light waves in the Kband, we are opening up immensely useful multicolor observations and bringing into play key shorter-wavelength emission lines, such as the calcium lines at λ= 0.8542 and 0.8662μm, which are useful for studies of star formation and galaxy evolution.

Using the latest in silicon MEMS technology, along with developments in other key areas, such as improved laser guide stars and more sensitive light-detector arrays, the Shane AO system will provide an advanced platform for high-resolution astronomy. The superior capabilities of the Shane telescope will enable astronomers to resolve dust rings, binary stellar companions, planets orbiting other stars, and detailed structures around the bright cores of galaxies. In addition, the system will be a demonstration pathfinder for next-generation systems for the world's largest observatories. The Laboratory for Adaptive Optics will be closely involved in research on those systems and in the development of tomorrow's ground-based telescopes.

We gratefully acknowledge support from the National Science Foundation (Astronomical Sciences Division) through a Major Research Instrumentation grant. Matching support for this project is provided by the University of California Lick Observatory.

Donald Gavel is director of the Laboratory for Adaptive Optics. He is a key contributor to the development of laser-guide-star AO systems for the Lick and Keck observatories.