Imaging and modeling of blood flow in the developing heart

Blood flow during early embryonic development modulates the growth and remodeling (volume and shape) of the heart. Several studies in animals have shown that altered hemodynamic conditions during embryonic development resulted in cardiac defects resembling those in the 1% of human newborns with congenital heart disease. To better understand the relationship between blood flow and cardiac development, as well as the mechanisms by which blood flow affects heart growth, we must quantify intracardiac blood-flow velocities during early embryonic development. There are, however, two main challenges in measuring blood-flow dynamics in the developing heart. The heart is tiny (<1mm) and it beats fast (∼2Hz). Both limit the accuracy of obtaining blood-flow velocities. To overcome that difficulty, we combined computational modeling and imaging in vivo.

We used a chicken embryo and optical coherence tomography (OCT) to image the beating, developing heart. During early development, the hearts of humans and chickens are very similar. The chick embryo and its heart are easy to access after opening the egg shell. OCT is a noninvasive optical-imaging technique that allows us to look at tissue sections in vivo with micrometer precision. Moreover, our OCT system simultaneously acquires structural (morphological) and Doppler (velocity) images, which allow measurements of both cardiac geometry and blood-flow velocity during the beating cycle (see Figure 1). Images of the outflow tract (OFT) of the developing chick heart at Hamburger-Hamilton (HH) stage 18 (∼3 out of 21 days of incubation) reveal a complex interaction between blood-flow dynamics and the heart's beating motion.1,2 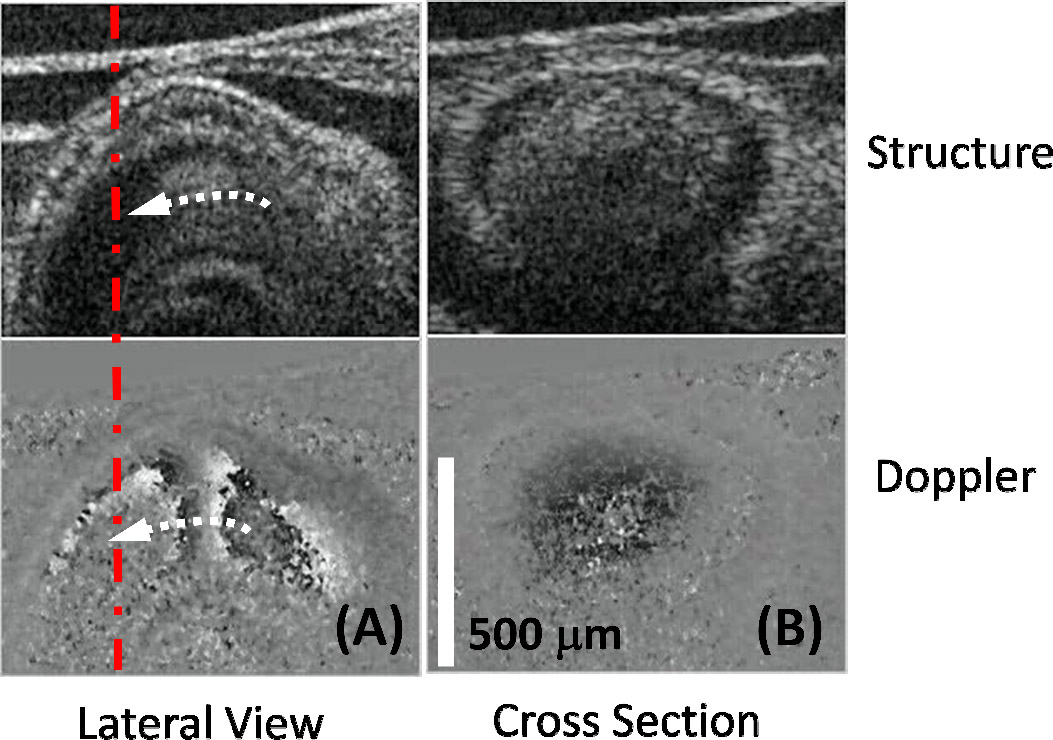 Figure 1.Simultaneous structural (top) and Doppler (bottom) optical coherence tomography (OCT) images of the cardiac outflow tract (OFT) of a chick embryo showing (A) lateral and (B) cross-sectional views when the OFT walls are expanded.

To handle the imaging-speed limitations of our OCT system in picturing rapidly changing 3D cardiac geometry over the beating cycle, we developed a synchronization procedure that allows reconstruction of a 4D image of the heart (3D cardiac structure over time) from nongated 2D image sequences acquired at several positions along the heart.3 Our synchronization procedure is based on the structural similarity of adjacent image sequences, but also accounts for the peristaltic-like motion of the developing heart. We applied our developed segmentation algorithms to the reconstructed 4D OCT images to enable both a better visualization of cardiac motion (see Figure 2 and a video4 of the segmented OFT motion) and the development of computational heart models. The reconstructed 4D images allow us to study the interaction between blood-flow dynamics and cardiac-tissue motion.2 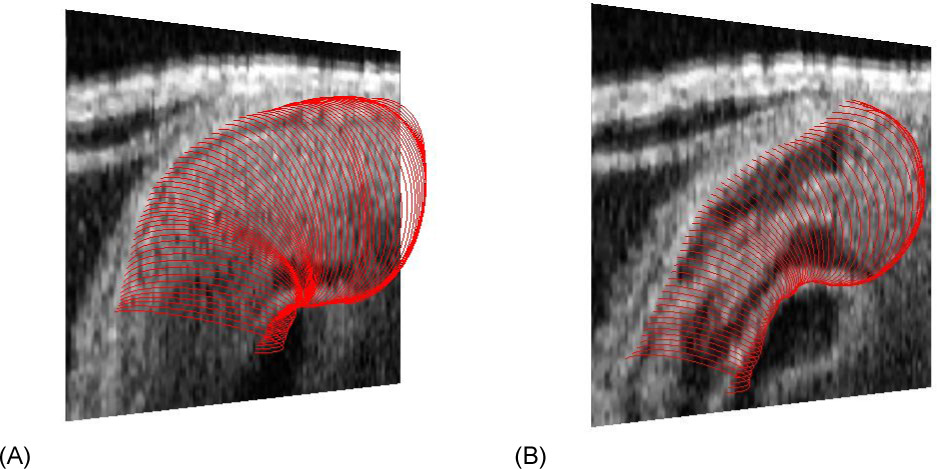 Figure 2.Segmented geometry of the myocardium of a chick embryonic-heart OFT at the embryonic-developmental Hamburger-Hamilton (HH) 18 stage when the OFT walls are (A) expanding and (B) contracting.

Computational modeling of the developing heart enables quantification of the distribution of blood-flow velocities over the beating cycle and the coupled interaction between blood flow and cardiac-tissue motion. Using relatively simple models of the HH18 chick heart, we showed that the OFT acts as a primitive valve. Its walls are subjected to a nonuniform distribution of hemodynamic stresses,5,6 which are important regulators of cardiac development that derive from blood-flow dynamics. Subject-specific models of the developing heart, in which the geometry of the beating heart is extracted from OCT images, allow a detailed analysis of the interaction between blood-flow dynamics and cardiac-tissue motion (see Figure 3).

Figure 3.Computational model of the cardiac blood-flow dynamics in the OFT of an HH18 chick embryo. The cardiac wall motion in the models was extracted from our 4D OCT images. Two phases of the beating cycle are shown when the OFT walls are (A) expanded and (B) contracting.

Understanding how blood flow affects cardiac development during early embryonic stages is a significant task, since abnormal blood-flow conditions may be the cause of an important fraction of congenital heart defects. The combination of OCT imaging and computational modeling allows us to compare the mechanics and morphogenesis of the developing heart during normal and altered blood-flow conditions, enabling a deep understanding of the mechanical changes that affect cardiac biology and development. This understanding might eventually lead to better early prognosis and treatment of congenital heart disease.

This research is currently supported by funds from the American Heart Association (0910093G), the National Science Foundation (1052688), and the National Institutes of Health (R01HL094570).

Sandra Rugonyi is an assistant professor.

Aiping Liu is a graduate student.

Xin Yin is a postdoctoral researcher.