The global energy and environmental crises have challenged materials scientists, for example to devise methods for solar-energy conversion to fuel via hydrogen production. This challenge cannot be met by current materials. Thus, development of a durable material capable of absorbing light over a large portion of the solar spectrum is urgently needed. Additionally, it must have the correct electronic band structure (band gap) to enable reactions such as water splitting for hydrogen harvesting. Development of materials with band gaps between 1.7 and 2.2eV that exhibit photoresponse (response to light) is currently underway. The first, important step in this search is generation of materials with new compositions and ideal band gaps. Once achieved, the next stage involves determination of their photoresponse. Photoactivity depends on structure, whether mono- or polycrystalline or porous. Monocrystalline films are ideal, since they have mobility or optical-absorption-depth scales that are as long as the relevant carrier-diffusion distances (see Figure 1). However, for many metal oxides this is not the case. 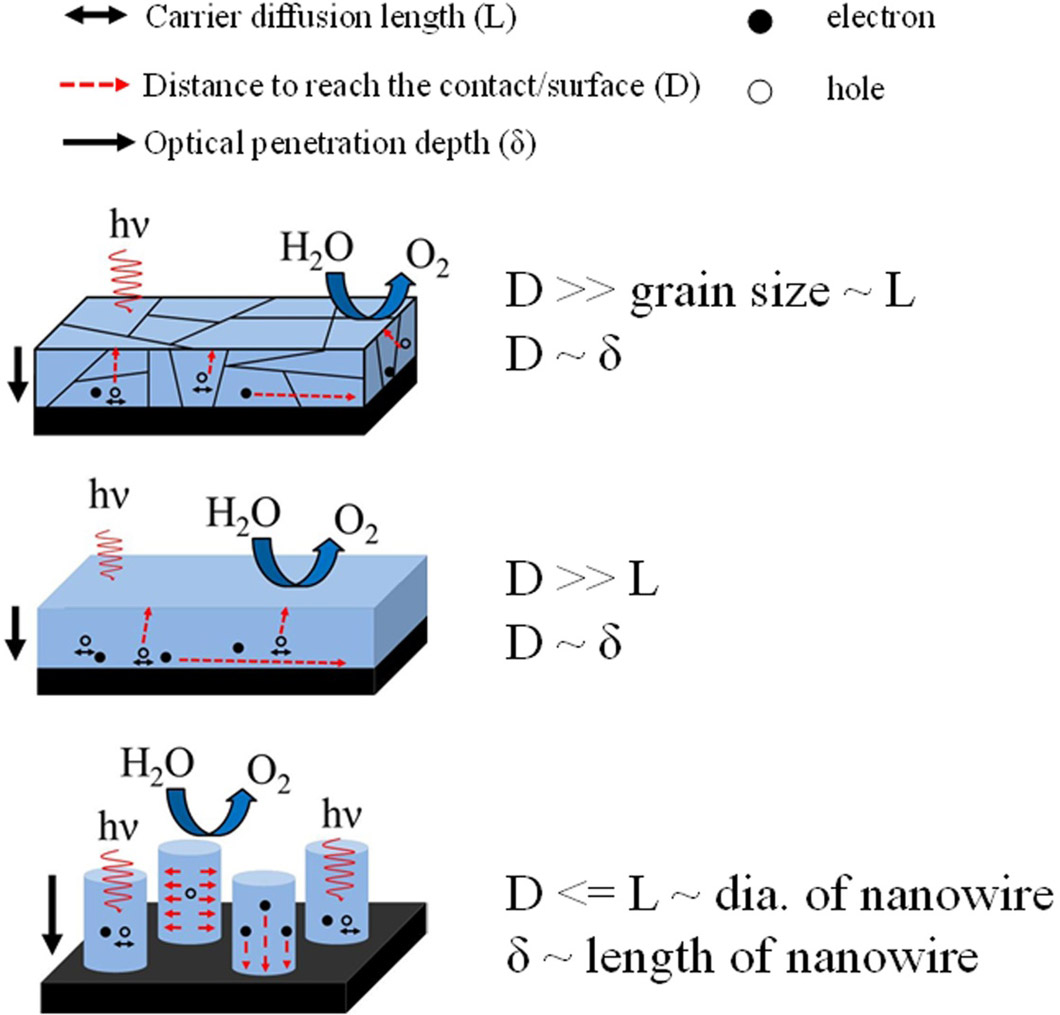 Growing large, single crystals is difficult. As a result, solar-hydrogen materials are predominantly poly- or nanocrystalline films. The latter contain many grain boundaries that act as trap sites, where generated carriers are annihilated in a recombination process. Thus, polycrystalline films cannot be reliably used to screen the photoresponses of the materials themselves. They may efficiently generate carriers upon light absorption, but recombination destroys the current, resulting in near-zero measured photoresponse. Thus, other architectures are needed to screen the photoresponse of solar-hydrogen candidates.

Nanowires are 1D crystalline materials with micrometer-scale lengths and sub-100nm diameters. In a vertically arranged form (array), the lengths are ideal for light absorption, while the diameters offer the requisite short length to enable diffusion of carriers to the surface. This drives electrochemical reactions. Therefore, light absorption and charge transport are efficient in nanowire systems, which makes them suitable for reliably screening the photoresponse of any new material: see Figure 1 (bottom). For example, iron oxide has an ideal band gap for solar-light absorption but is considered a Mott insulator. This means that carriers cannot diffuse more than a few nanometers, making consistent photoresponse data from thin films difficult to obtain. However, our recent measurements suggest that, when synthesized as hematite nanowire arrays, iron oxide can yield reliable photoresponse. Additionally, preparation of iron oxide nanowire arrays is very simple,1 scalable, and shows promise for photo-electrochemical applications.

Nanowire arrays of most metal oxides are easy to synthesize,2 and their diameters are within the reaction and diffusion size ranges needed for gas-phase reactions. Thus, they can behave as 1D reaction chambers, where new materials can easily be created and tested for their photoresponse. Also, with diameters shorter than 20nm, micrometer-long metal-oxide nanowires can be converted to other compositions, allowing for rapid testing of numerous new materials. For example, in a recent study we transformed tungsten trioxide (WO3) nanowire arrays to tungsten subnitride (W2N) arrays while maintaining a high degree of crystallinity.3 Both the WO3 and W2N arrays exhibited reproducible photoactivity.4 The nanowire architecture has the added benefit of accommodating stress generated from changes in crystal composition better than thin films. They can retain their monocrystallinity, resulting in excellent charge-transport properties.

There is also considerable interest in other materials for solar-fuel applications. For example, ternary nitride materials are potential candidates, despite exhibiting phase segregation because of stresses caused by lattice mismatch. Currently, we are investigating how to control the composition of such alloys when grown on presynthesized nanowires with diameters less than ∼25nm. We hypothesize that, with their enhanced strain-relaxation properties, the nanowires will accommodate some of the stress of alloy growth. Specifically, our results with gallium nitride arrays are very promising, and we envisage that this methodology will be useful for creating technologically important ternary nitride alloys in the hitherto unobtainable monocrystalline form.

In summary, we suggest various approaches for how nanowires with sub-100nm diameters can be used to create and reliably screen new compounds for photoresponse. This is critical in accelerating our search for new materials in the field of solar-fuel harvesting.

Chandrashekhar Pendyala has been a doctoral candidate since 2006. His is researching synthesis and growth mechanisms of ternary type-III–V alloys for energy applications. He has authored or co-authored eight publications and co-authored two chapters in Inorganic Nanowires: Applications, Properties, and Characterization(CRC Press).