A novel photosensitizer could lead to photodynamic therapy for in vitro inactivatation of the virus that causes acquired immune deficiency syndrome.
02 June 2011
Yingxin Li, Huijuan Yin and Yongtang Zheng

Left untreated, human immunodeficiency virus (HIV) infection will develop into acquired immune deficiency syndrome (AIDS), leaving the host vulnerable to disease. At the end of 2008, the World Health Organization estimated that 33.4 million people worldwide were living with HIV, two-thirds of them in sub-Saharan Africa. The main treatment for HIV or AIDS is to take antiretroviral drugs, which reduce the level of HIV infection and can prevent the onset of AIDS for many years. However, these drugs must be taken for the rest of a person's life and can cause side-effects ranging from headaches and nausea to damage to organs such as the kidneys, liver, and pancreas. As a result, researchers continue to seek more effective anti-HIV therapies.

One promising candidate is photodynamic therapy (PDT). In this two-step technique, the topical or systemic delivery of photosensitizing drugs is followed by irradiation with visible light, which ultimately kills nearby cells.1,2 The photosensitizer methylene blue (MB) is used clinically in some European blood centers to inactivate the common HIV-1 form of the virus in blood and blood products.3 However, its use in vivo is limited because it can damage DNA.4

We investigated a potentially less toxic in vitro photosensitizer, known as hematoporphyrin monomethyl ether (HMME).5,6 We wanted to determine whether HMME-PDT is less toxic than MB-PDT and also whether it could inactivate HIV particles and inhibit HIV infection. We did this by assessing its effect on all stages of infection, including attachment, invasion, reverse transcription, integration, duplication, translation, and assembly.7 We found that, although HMME-PDT is ineffective at inhibiting acute and chronic HIV infection in vitro, it can suppress virus attachment and entry to cells and also inactivate free HIV particles.

HIV invades certain ‘host’ immune cells in the human body, such as T-lymphocytes. We compared proliferation of the cells after treatment of T-lymphocyte cell lines C8166 and MT-4 to establish in vitro PDT toxicity. Our goal was twofold: to show that HMME is safer than MB; and to identify the safe dose of HMME for the host cells (i.e., the dose for which the survival rate of cells is more than 80%) to avoid damage during our investigations. In all the experiments, we found that HMME-PDT was less toxic than MB-PDT, suggesting that HMME may also be safer than MB in vivo.

We then studied the effects of PDT on acute HIV-1 infection, when the virus destroys MT-4 cells and induces malformed cells called syncytia in C8166. We counted the syncytia in treated cultures and compared them with those in the infected control culture. We also looked at the effectiveness of PDT against chronic infection, which occurs when the RNA (a molecule critical to protein synthesis) of HIV-1IIIB integrates into the DNA of another T-lymphocyte cell line, known as H9, to form H9/HIV-1IIIB cells. These cells can secrete HIV-1IIIB, and we studied the effect of PDT on this secretion. We used the standard enzyme-linked immunosorbent assay antibody test for HIV, which detects the HIV protein p24. We found that PDT was essentially ineffective at inhibiting acute and chronic HIV infection in vitro, which suggests that neither HMME-PDT nor MB-PDT inhibit the key viral activities of HIV infection.

To investigate the attachment and invasion stages of HIV infection, we considered virus-cell and cell-cell fusion. We incubated HIV-1IIIB virus suspensions with photosensitizers at 37°C for 40min, and then added them to 104 C8166 cells (50μm of 6×105 cells per milliliter of culture media, multiplicity of infection = 0.3) for 1h at 4°C to allow virus-cell fusion. After incubation for different times at 37°C, we irradiated the cells with an energy density of 0.3J/cm2. For cell-cell fusion, we mixed photosensitizers with 3×104 C8166 cells (i.e., 50μm of 6×105 cells/ml) and 104 HIV-1IIIB/H9 cells (i.e., 50μm of 2×105 cells/ml), which we incubated for 0, 15, 30, or 60min at 37°C before irradiating them. The highest inhibition rates were more than 60% by PDT (see Figure 1), which suggests that viral attachment and entry may be suppressed by MB-PDT and HMME-PDT. In previous treatments, the fusion inhibition rates ranged from 30 to 80%. However, the advantage of HMME-PDT is that it has two targets: HIV-membrane fusion and free HIV particles. We also investigated the effect of PDT on cell-free virus in vitro and found that it was significantly inactivated (see Figures 2 and 3). With an optimal dosage of PDT, the inactivation of HIV could approach 100%. These results affirmed that PDT could be a useful tool for effective blood disinfection. 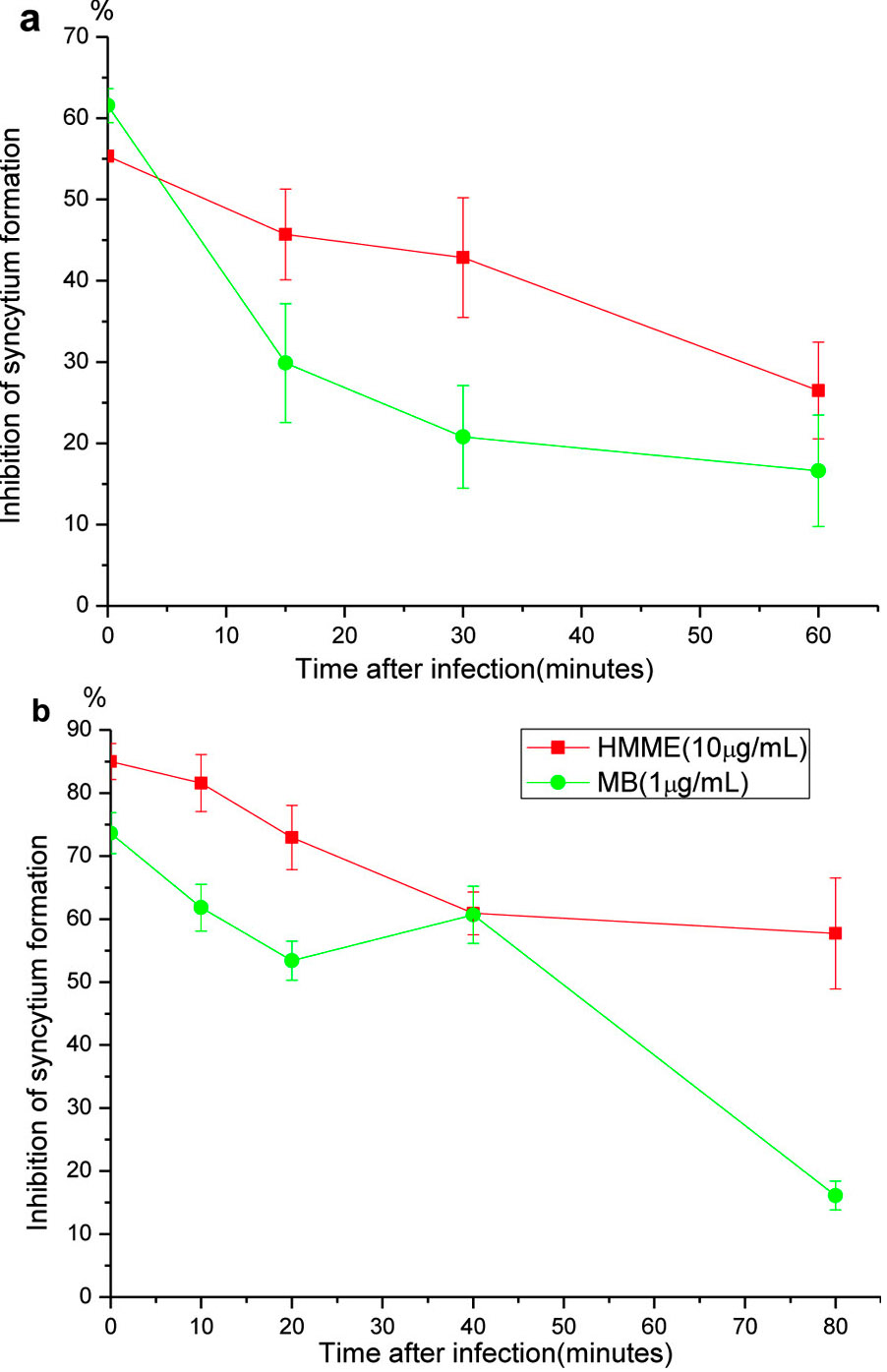 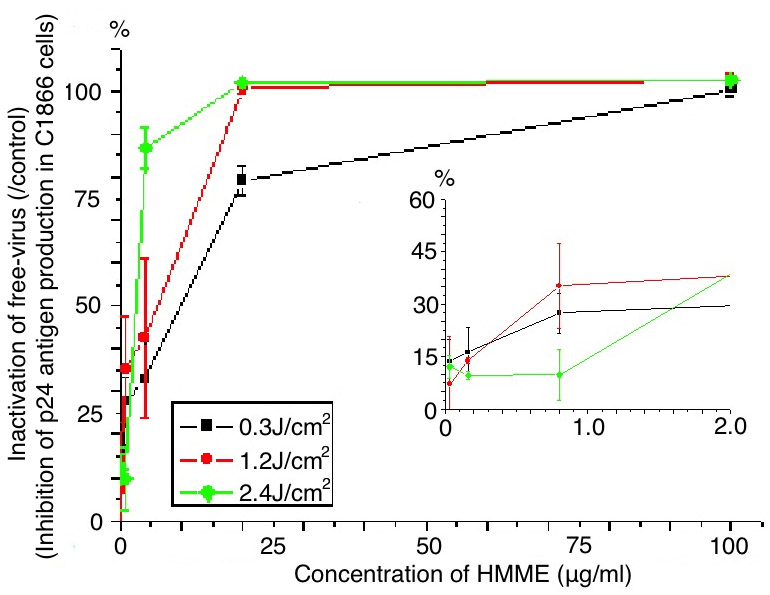 Figure 2. Dose-response curve of cell-free HIV-1IIIBinactivation by HMME-PDT. Cell-free virus was irradiated with energy densities of 0.3J/cm2(■), 1.2J/cm2(•), and 2.4J/cm2(◆). Data points represent the mean ±standard deviation. Inset: Magnification of the region near the origin. 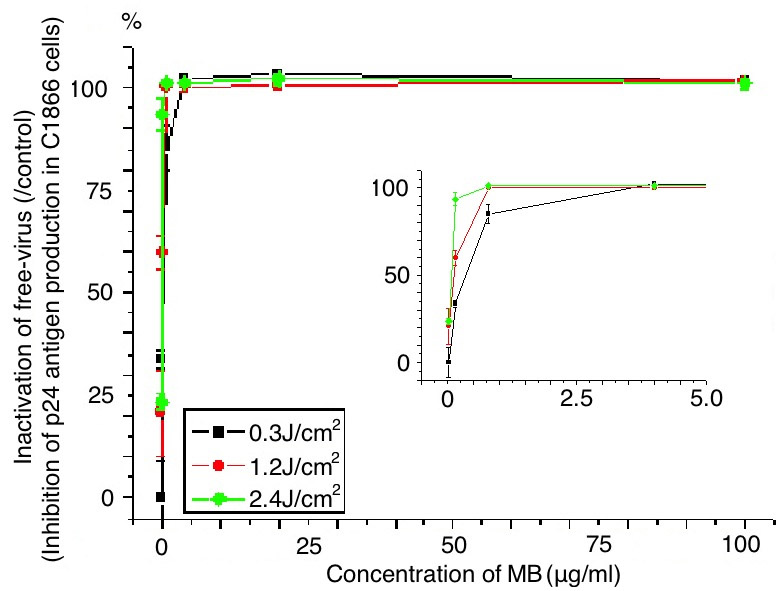 Figure 3. Dose-response curve of cell-free HIV-1IIIBinactivation by MB-PDT. Cell-free virus was irradiated with energy densities of 0.3J/cm2(■), 1.2J/cm2(•), and 2.4J/cm2(◆). Data points represent the mean ±standard deviation. Inset: Magnification of the region near the origin.

Our results show that HMME-PDT inhibits HIV attachment and entry to human cells and can also inactivate free viral particles. In the light of these findings, we suggest that HMME-PDT could be an effective treatment for HIV-infected individuals, especially those with high viral loading (e.g., AIDS). We have developed a protocol for treating AIDS that has similarities to the process of dialysis used to clean the blood of patients with non-functioning kidneys. The patient's blood circulation is extended to outside the body and separated into plasma containing cell-free virus particles and blood cells, so that HMME-PDT can be performed on each part at optimal doses. However, further work is required to establish whether the protocol is safe, what effect it has on the patient's immune system, and whether drug-resistant HIV-1 and the less common HIV-2 (West African) form of the virus respond to HMME-PDT. These questions will be the focus of our future studies.

Yingxin Li obtained his PhD from Tianjin University in 1990. He subsequently worked at Tianjin Medical University (1990–2010) and gained a professorial fellowship in 1997. Yingxin Li is now a deputy director and professor.

Huijuan Yin is a recent graduate of the Department of Biomedical Engineering at Tianjin Medical University. She is now an assistant researcher.