Svante Arrhenius1 suggested that just as living spores could, on rare occasions, be lofted from the Earth's atmosphere out into space, so could alien spores lofted from other inhabited planets arrive at the Earth. Arrhenius' version of panspermia suffered the handicap that it did not lend itself to verification at the time, and science never takes kindly to such theories. The rate of microbe addition that he proposed was so minuscule as to be unobservable by even the most ingenious of contemporary techniques. This problem was compounded by a succession of critics who came forward to argue that bacteria and spores cannot survive the harsh environment of space. Although the latter objection is now less relevant because of the discovery of extremophilic bacteria that can endure space conditions, the prejudice against panspermia continued well into the present century. Critics are vocal in pointing out that panspermia fails to address the problem of how life arose, merely seeking to transfer it elsewhere.

In the 1970s and 1980s, one of the twentieth century's foremost astronomers, Fred Hoyle, and myself promulgated a new theory of cometary panspermia.2–4 The basic idea was that the de novo emergence of life in the diminutive setting of the Earth is untenable, and that the origin of life must be considered in a pan-astronomical or cosmological context as a possibly unique event. Following such a cosmic origin, microorganisms remain frozen in cometary bodies and are also transported within comets from one location to another. Interstellar dust contains a minute fraction of viable microorganisms expelled in the tails of comets along with a vast preponderance of dead/fossilized microbes and their degradation products. Surviving microbes are continually recycled and their numbers vastly amplified within the warm liquid interiors of comets during the initial phases of the formation of any planetary system. Inevitable exchanges of biotic material between planets, comets, and embryonic planetary systems provide ample scope for Darwinian evolution on a cosmological scale.

Unlike earlier versions of panspermia, the theory of cometary panspermia cannot be criticized as non-verifiable. Various predictions made by this theory can be identified and tested. The prediction that comets expel organic and biological material in various stages of degradation is imminently testable using modern astronomical techniques. After the 1986 missions to comet Halley, the organic content of comets was amply verified. A wide range of complex organic molecules has indeed been observed in comets, as shown, for example, in the results of in situ studies of cometary nuclei following the Deep Impact and Stardust missions.5 Vast quantities of organic molecules, including the polycyclic aromatic hydrocarbons (PAHs) discovered in interstellar clouds, are better understood as biodegradation products, rather than as evidence for the dubious thesis of ubiquitous prebiology.6 Figure 1 shows spectroscopic evidence supporting the former possibility. 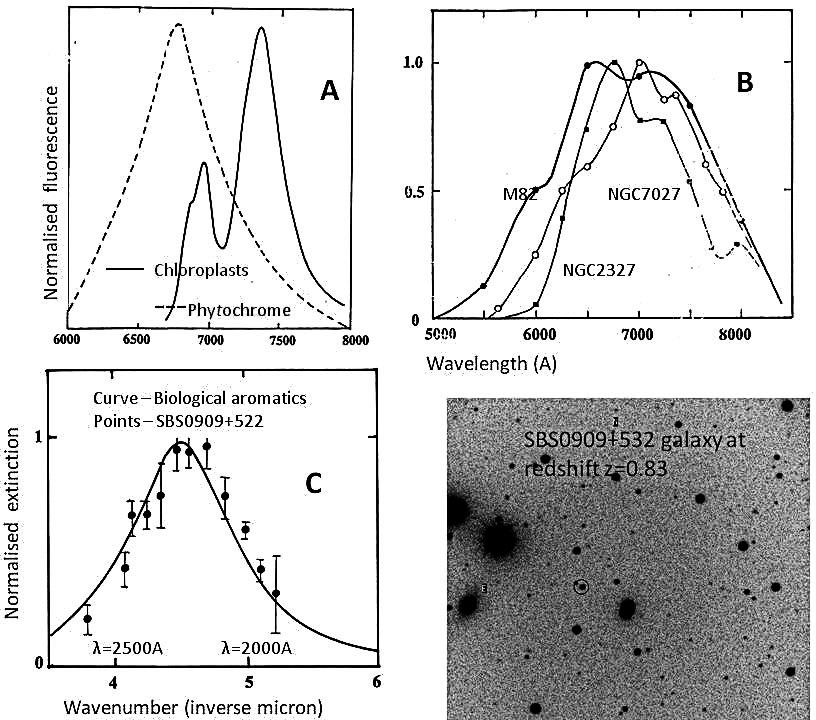 Figure 1. Top: Extended red emission arising from galactic and extragalactic nebulae, matching data on the fluorescence of biochemicals in chloroplasts and phytochrome. Bottom: 2175Å absorption feature in the spectrum of a very distant galaxy SBS (redshift z = 0.83, light emitted at a time when the universe was half its present age), matching the behavior of biological aromatics.

A more startling and controversial prediction of cometary panspermia is that the material from comets reaching Earth contains not just organic molecules but evidence of life itself. During annual meteor showers such as the Leonids, cometary debris in the form of centimeter-sized particles burns up as it enters the atmosphere at high speed. Smaller clumps of comet dust enter the atmosphere steadily at the rate of about 50 metric tons per day, and these particles do not burn up on entry. Occasionally much larger bodies–meteorites, which can be regarded as chunks of spent comets–also make their way through the atmosphere. The outer surfaces of such meteorites are ablated by friction with the atmosphere, but their interiors remain cold during re-entry, so fragile organic structures could be preserved.

Is there evidence for microbial life in extraterrestrial bodies that reach Earth? In January 2001, clumps of cometary dust were collected aseptically in the stratosphere from heights that are too high to loft 10-micrometer dust particles from the Earth's surface. We have reported evidence of both fossilized microbes (acritarchs) and living microorganisms in the cometary dust, which was analyzed using electron microscopy and energy-dispersive x-ray spectroscopy (EDX) studies.7 Electron micrography and EDX data for putative acritarchs (common fossils in geological sediments) are shown in Figure 2(a). Images of living microbes are shown in Figure 2(b). Evidence for living microbes could conceivably be dismissed as contamination, unlikely as this might be in view of the stringent containment protocols that were adopted. However, the morphologies of fossil microbes that we have discovered, combined with other biosignatures, including a nitrogen deficit, are more difficult to ignore.

Figure 2. (a) Putative fossil bacteria (acritarchs, commonly found in sediments on Earth) with cracked outer shells. The graph illustrates a conspicuous N deficiency characteristic of fossils. (b) SEM images of putative living microbes with evidence of biofilm (A,C,D). B is a confocal microscope image of a clump of cells fluorescing with the application of a carbocyanine dye, indicating their viability.

In the 1960s, serious claims8 were made that bacterial fossils exist in meteorites, but these were dismissed quickly because in a few instances contamination was actually proved. However, later work by Hans Pflug9,10 in the 1980s and by Richard Hoover11 in the past decade are effectively safe from the criticism of contamination. Their pioneering work leaves little room for doubt that carbonaceous meteorites such as the Murchison meteorite (which fell near Victoria, Australia in 1969) contain unequivocal evidence of microbial fossils. Figure 3 shows examples from Pflug's data discussed by myself and colleagues,7 and Figure 4 is one example from the extensive work of Richard Hoover.11 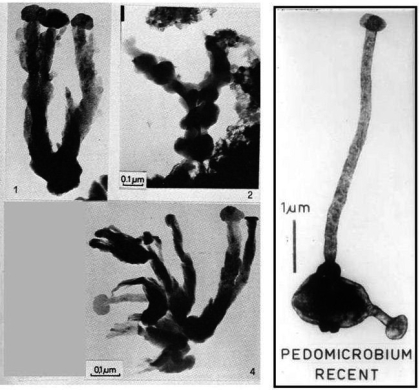 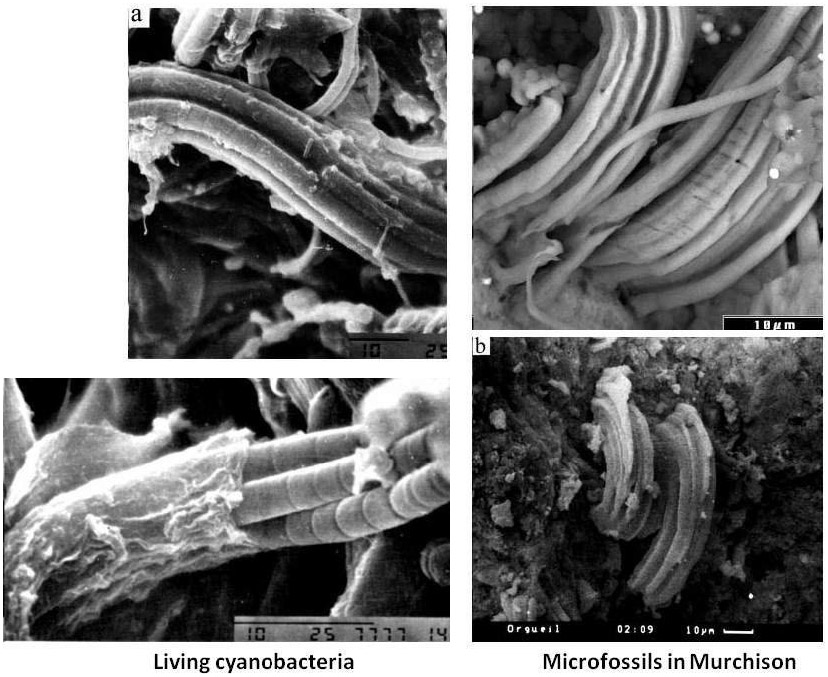 The presence of fossils of alien life in the dust and fragments of comets would provide strong support for cometary panspermia and indeed confirm our cosmic ancestry beyond doubt. The emerging picture is that the origin of life was a unique cosmological event that was accomplished within planetary interiors and the interiors of cometary-type bodies within a few million years of the Big Bang.12 Comets are carriers and amplifiers of cosmic life, and Earth was seeded with such life some four billion years ago and continues to be seeded even to the present day. In this picture, self-similar life forms must exist abundantly throughout the entire universe.

These conclusions are so far-reaching that further studies are urgently needed for their absolute and final confirmation. If this can be done, the implications for science and humanity will be profound. The cost of such projects would be only a minute fraction of that involved in manned space flights and probes to study planets and comets that are already in progress. The payoff would be well worth the effort and the cost.

Chandra Wickramasinghe obtained his PhD and ScD degrees from Cambridge University and is currently professor and director of the Cardiff Center for Astrobiology at Cardiff University. He is a leading astrophysicist and proponent of the theory of panspermia.