Stratospheric aerosols originate primarily from injection of sulfuric materials by major volcanic eruptions, such as Mt. Pinatubo (Philippines) in June 1991. They play an important role in the chemical and radiative balance of the atmosphere by reducing the amount of solar energy at the surface and absorbing IR radiation and thus warming the stratosphere.1,2 They also serve as sites for chemical reactions that lead to ozone loss. Although anthropogenic effects on climate are well understood,2 the contribution of human activity relative to volcanic input during stratospheric-aerosol-background periods is unclear.

Since June 2006, the Cloud-Aerosol and Lidar Infrared Pathfinder Observations (CALIPSO) satellite, a joint US (NASA)/French (Centre National d'Etudes Spatiales) mission, has provided high-resolution aerosol and cloud profiles of the Earth's atmosphere. The long-range transport in the tropics of several small-scale volcanic plumes has been monitored using these observations, which are unprecedented in their scope and detail. Their fate demonstrates the importance of even minor volcanic events on stratospheric-aerosol levels.

CALIPSO offers a unique opportunity to monitor aerosols and clouds in the atmosphere. The instrument is carried on a spacecraft circling the Earth in a polar orbit (see Figure 1), which provides coverage from 82°S to 82°N. The CALIPSO lidar (light detection and ranging) uses a laser that emits light at 532 and 1064nm. The laser light is scattered by molecules and particles in the atmosphere, and a portion is scattered back (backscattered) towards the spacecraft. The backscatter signal is collected by a telescope and sampled at a rate of 10MHz. The 3D location and density of clouds and aerosol layers can be inferred from the vertical backscatter profiles from the ground to the stratosphere.3 Primarily designed for studying tropospheric particles, the nighttime channel at 532nm has a high sensitivity and can, with sufficient averaging, be used to detect small-scale volcanic plumes in the stratosphere for several months, even if the aerosol density is very low.4

Figure 1. (left) The CALIPSO (Cloud-Aerosol and Lidar Infrared Pathfinder Observations) satellite can detect, with its laser, particles in the atmosphere such as volcanic aerosols from the Sarychev eruption on 12 June 2009, here seen photographed from the International Space Station (right).

Since June 2006, CALIPSO observed several volcanic plumes and followed them as they were carried around the world by atmospheric circulation. Figure 2 shows the evolution of the mean scattering-ratio (SR) profile between 20°N and 20°S from June 2006 to May 2010 with a temporal and vertical resolution of 16 days (CALIPSO measurement cycle) and 200m, respectively. The SR is the ratio between the total (aerosol and molecular) and molecular-only backscatter. The maxima, seen in 2006 with an SR greater than 1.2, represent two volcanic plumes, injected at 20 and 17km, respectively, by the Soufriere Hills in the Caribbean on 20 May and the Tavurvur cone of the Rabaul volcano in Papua New Guinea on 7 October. The plume from Soufriere Hills remains at the same level for three months before being slowly lifted in the stratosphere by the general circulation, while the Tavurvur aerosols, at lower levels, disappear within two to three months. 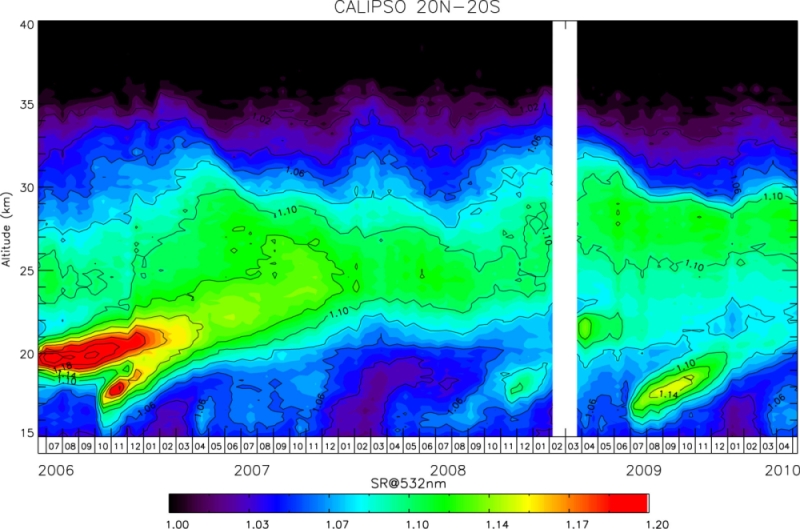 Figure 2. Evolution of the mean scattering ratio (SR, aerosols relative to backscatter from air molecules) at 532nm from the CALIPSO lidar around the Earth between 20°N and 20°S from 15 to 40km, in the period from June 2006 to May 2010.

Smaller plumes, with SRs between 1.08 and 1.14, were observed at 17–19km in November–December 2008 and July–December 2009, respectively. These two plumes are further transported into the tropics after the Kasatochi (Alaska) and Sarychev (Kamchatka, Russia) eruptions on 7 August 2008 and 12 June 2009, respectively. The signal seen at 21–22km in March 2009 with an SR of 1.10–1.12 is the signature of soot particles from an extreme biomass-burning episode near Melbourne (Australia) on 7 February 2009 (‘Black Saturday’).

For the first time, those moderate events have been detected over a long period, demonstrating that eruptions with a volcanic explosivity index between three and four and located in the tropics can be an important source of aerosols for the stratosphere, a fact not fully recognized until now. The sulfuric dioxide initially injected at 19–20km is oxidized into sulfuric acid droplets and transported by the general circulation—also called Brewer-Dobson (BD) circulation—into the middle tropical stratosphere, forming a reservoir. Afterwards, those aerosols are released into the global stratosphere according to the season and the phase of the quasibiennal oscillation.5 The vertical velocity of the ascending branch of the BD circulation can be deduced by subtracting the sedimentation from the apparent volcanic-plume uplift, providing an opportunity to evaluate the mean vertical atmospheric motion in the stratosphere.

However, the fate of volcanic plumes injected below 20km is very different. Indeed, they disappear within 1–3 months and are diluted every winter, directly or after horizontal transport from middle latitudes to the tropics, by rapid injection of clean air (SR<1.04, in blue) coming from the tropical troposphere. The rapid propagation of clean air parcels is in phase with the deep convective season of the southern hemisphere.6 This would indirectly indicate that deep convection is reaching the lower tropical stratosphere and can potentially affect the chemical balance of this region.

The CALIPSO lidar offers a unique opportunity for studying stratospheric aerosols in the tropics through its high vertical and temporal resolution. In its first five years, the plumes of several volcanic eruptions have been observed and have underscored the importance of moderate tropical eruptions at the level of stratospheric aerosols. The lifetime of those aerosols depends primarily on the altitude of the initial volcanic injection, 20km being the critical level above which they last for years. Consequently, CALIPSO provides important information relevant to the recently proposed geoengineering solution7 that would address global warming by reproducing the cooling effect of volcanic eruptions. The perspectives offered by CALIPSO are broad, but we will focus in the future on the role of nonvolcanic aerosols, natural and/or anthropogenic, in the tropical upper troposphere.

Jean-Paul Vernier is currently in a NASA postdoctoral program administered by Oak Ridge Associated Universities. He holds a PhD in atmospheric science. He did his thesis work on the detection of stratospheric aerosols with the CALIPSO lidar satellite under the sponsorship of the CNRS at the Laboratoire Atmosphères, Milieux, Observations Spatiales (LATMOS) of the Université de Versailles Saint-Quentin-en-Yvelines in France.