Recent progress in advanced semiconductor light sources, together with their brightness and narrow linewidth, should help overcome resistance to their widespread application.
17 November 2010
Sheng Wu and Andrei Deev

Why is it that only a diode laser can burn a movie on a DVD? Why does it take a laser and not a lightbulb to power a fiber-optic network? Here, a laser's brightness—its ability to focus onto a tiny spot or to travel with minimal loss over long fiber distances—is key (see Figure 1). With their high brightness and small size, mass-producible semiconductor light sources have transformed the telecommunications, lighting, and entertainment industries. Today, quantum cascade lasers (QCLs), with similarly impressive potential, are attracting the interest of the traditional mid-IR spectroscopy community, which has been using blackbody lamps for over a century. However, acceptance of these new light sources has been slow. The main objections are that, compared with the reliability of 10W blackbody sources, QCLs are less powerful, may not work continuously, barely tune 1% of the IR, yet cost 100 times more. Although recent improvements in the power1,2 and tuning range3 of QCLs are putting the lie to this conventional wisdom, applications have yet to be found that can do for the new sources what DVDs and fiber optic communication did for diode lasers. In this article, we describe research aimed at exploring such applications. 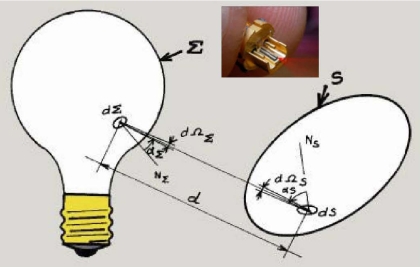 Figure 1. Even though a one-dollar lightbulb emits 10W for >1kWh (left), its brightness (power emit from unit area dΣand angle dΩ around the norm vector NΣ) is far less, and its étendue (Σ×Ω) much greater, than a semiconductor laser (the tiny stripe at the fingertip: see inset). Accordingly, quantum-cascade lasers (QCLs) could be coupled efficiently into hollow waveguides, whose étendue (S×ΩS) is much smaller, whereas blackbody lamps cannot.

IR spectroscopy has been used extensively in chemistry for both structural interpretation and quantitative analysis, in a way similar to mass spectroscopy (MS) but with a new twist: whereas MS smashes a big molecule apart and measures the mass of smaller pieces to identify the original molecule, IR spectral data indicate the shape (or ‘stereo’ structure) of the molecule. IR has typically been overshadowed by MS because in many chemical analytical instruments, its sensitivity is suboptimal. For example, in a traditional gas chromatography (GC)-IR setup, the coupling efficiency and transmission of IR radiation from a blackbody source are so low that the lightpipe or a hollow waveguide (HWG) must have a bore size over 1mm and length less than several inches to get even minimal light for signal collection. This severely limits the detection limit of IR as an online sensor for GC.

We were the first to measure and report that the ultrahigh brightness of QCLs enables efficient coupling and low-loss transmission over several meters of an HWG whose bore size could be as small as a GC capillary bore size, i.e., 300μm. This technology significantly increases the sensitivity of IR to within the range of MS.4 We are currently developing a field-deployable compound-specific stable isotope (13C/12C) analyzer (see Figure 2) using our technology. The information provided by the device will enable field analysis of materials required for fossil fuel exploration or to identify the origin of the food we buy at grocery stores. 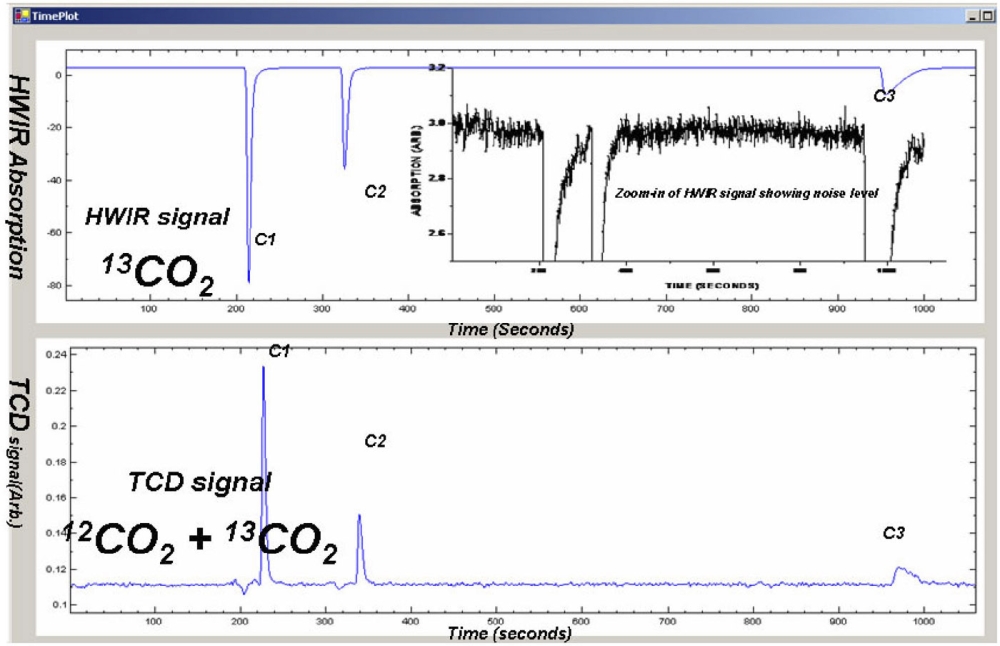 To further exploit the unique properties of QCLs, i.e., their inherently narrow intrinsic linewidths compared with other diode-type lasers, we are attempting to show that ultrafine spectroscopy could be carried out in HWG under relatively low pressure.5 Doppler-limited (<0.01cm−1) and Doppler-free resolution (<0.00001cm−1) will increase the chemical IR spectral resolution to levels previously available only for ultraprecision Fourier-transform IR and laser metrologies, where the instruments often have footprints the size of a large optical table.

In another project, we are showing that QCLs can be efficiently coupled to a tiny calcium fluoride (CaF2) crystal ball's whispering gallery mode (see Figure 3), circulating over hundreds of miles on the surface of the ball. These findings have two implications. First, the CaF2 ball will serve as a high-finesse etalon, allowing QCLs to be locked onto and scanned over a wide range. Second, the evanescent wave outside the CaF2ball will permit chemical sensing based on the Beer-Lambert law regarding the absorption of light. Accordingly, an equivalent optical path length over hundreds of meters might be possible with sample volumes as tiny as nanoliters.5 Such a development could allow IR detection on the level of the metabolism of single cells. 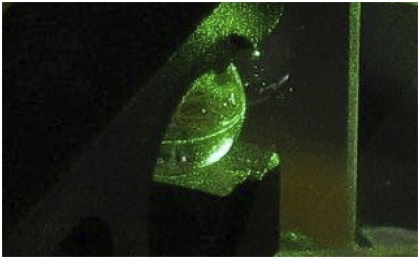 Figure 3. A mid-IR QCL couples efficiently into the whispering gallery mode of a calcium fluoride ball, as shown by a green circle excited by a visible green laser. QCLs could potentially circulate long distances up to hundreds of miles, and use evanescent waves to realize effective Beer-Lambert absorption path lengths over hundreds of meters in a volume of less than one nanoliter.

Andrei Deev is manager of the Environmental Science Division.