Biomarkers found in carbonaceous meteorites are inconsistent with an abiotic origin, and missing life-critical biomolecules indicate that large, complex filaments are extraterrestrial microfossils rather than modern contaminants.
15 September 2010
Richard B. Hoover

Meteorites are extraterrestrial in origin and, therefore, provide the best samples on Earth in which to search for evidence of extraterrestrial life. The significance of extraterrestrial life is so profound that rigorous standards must be invoked to evaluate the validity of biomarkers. Such undeniable signatures of past or present life could be morphological (recognizable microfossils) or molecular (life-critical biomolecules). Valid biomarkers in meteorites must be both biogenic (clearly biological) and indigenous (present before atmospheric entry).

In living organisms, amino acids are genetically encoded biomolecules that exhibit chirality. That is, they have mirror images that cannot be superimposed on the original (see Figure 1). Except for glycine (which is symmetric), all protein amino acids have optical activity and are levorotatory (L-), that is, they rotate plane-polarized light counterclockwise. (Their enantiometers, dextrorotatory or D-amino acids, are chemically identical, but rotate polarized light the same number of degrees clockwise.) Homochirality is a hallmark of life. It is essential for proper folding of proteins and enzymes into domains and pleated sheets. All sugars in DNA and RNA molecules are dextrorotatory and coil in right-handed helices. Conversely, abiotic amino acids are always equal mixtures of levo- and dextrorotary species (D/L=1), although some processes can yield a slight excess of a single enantiomer (<5%).

In 1961, complex hydrocarbons, kerogens, microfossils, and amino acids were reported in carbonaceous meteorites.1,2 The small, spherical microfossils had indeterminate biogenicity. One of the stones of the Orgueil meteorite was intentionally contaminated.3 The suggestion of a hoax effectively terminated all searches for meteorite microfossils until 1996, when biomarkers and nanofossils were reported in a meteorite that originated on Mars.4 Although the microfossils were subsequently dismissed as too small, abiotic coating artifacts, or modern contaminants, this pioneering paper triggered many scientific discoveries, launched the field of astrobiology, and inspired my investigations of biomarkers and microfossils in meteorites.5

In the Murchison and Orgueil meteorites, I found filaments that had morphologies and sizes matching those of known cyanobacteria and other trichomic prokaryotes. They exhibited undeniably biological features, including chains of cells, cell walls, sheaths with cross-wall constrictions, filaments (uniseriate, multiseriate, branched or unbranched, isodiametric or tapered), calyptrate apical cells, specialized cells for reproduction, as shown in Figure 2(a) (hormogonia, baeocytes, akinetes), and for nitrogen fixation (basal, intercalary, and apical heterocysts), evidence of motility, as shown in Figure 2(b) (emergent trichomes and empty helical sheaths), and of adhesiveness (fimbriae). Complex filaments are found in mats and ecologically consistent assemblages. They satisfy the strict biogenicity criterion, since no known abiotic mechanisms mimic such complex and diverse characteristics of life. The next major hurdle was establishing these embedded filaments as indigenous rather than modern (post-arrival) biocontaminants.8 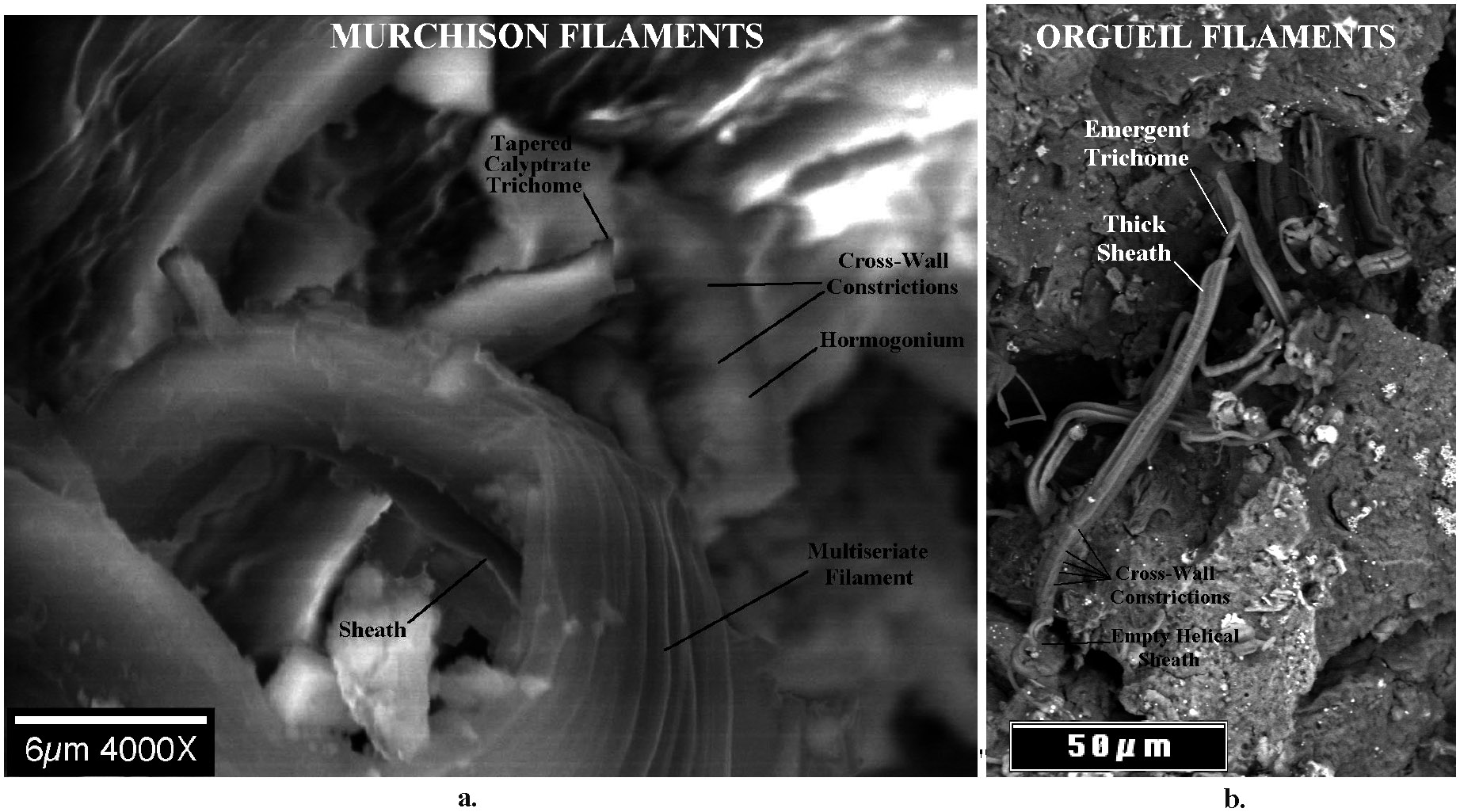 Figure 2. Microfossils in (a) the Murchison and (b) Orgueil meteorites.

Filaments embedded in freshly fractured surfaces indicate indigenicity, and elemental compositions and amino acid biomarkers distinguish modern biocontaminants from indigenous microfossils. Twenty common protein amino acids are essential to all life on Earth. Nitrogen is present in all and is slowly released after cellular death. EDS data reveal that the Orgueil and Murchison filaments are severely depleted in nitrogen (<0.5% atomic) compared to modern cyanobacteria and hair or tissues of mummies or Pleistocene mammoths (~2–18%): see Figure 3.9 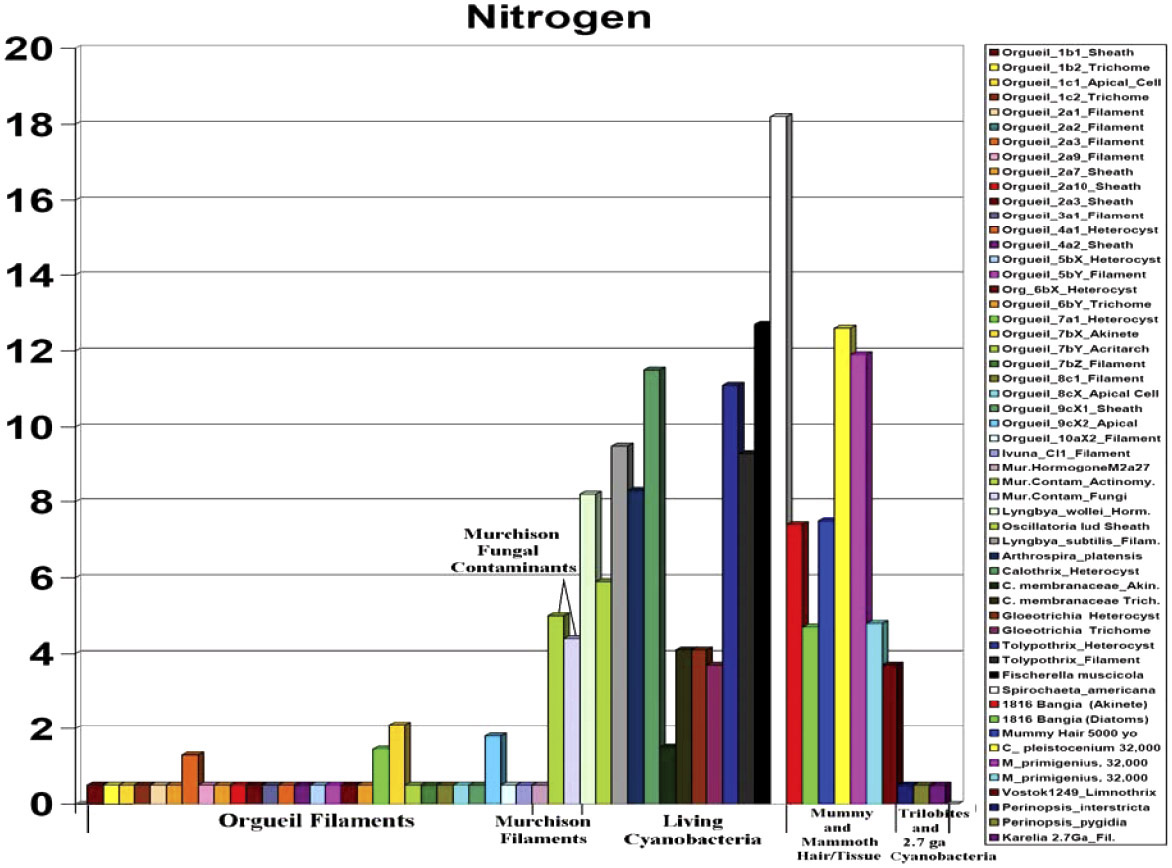 Figure 3. Nitrogen in the Orgueil and Murchison filaments, living cyanobacteria, mammoths, and trilobites.

Chiral amino acids found in living bacteria,10 terrestrial fossils,11 and carbonaceous meteorites12 are listed in Table 1. Amino acids shown in italics have not been detected in meteorites and are also missing from hadrosaur bones and fossil insects. After death, protein amino acids racemize with age or disappear entirely, decomposing or reacting to form humic-like substances. Only eight of the 20 life-critical protein amino acids are detectable in water/acid extracts of carbonaceous meteorites. The most abundant amino acids in meteorites are not common in biology. However, isovaline and α-aminoisobutyric acid form by diagenetic alterations of ancient biological materials, and γ-aminobutyric acid can be synthesized by organisms. Engel and Macko13 established strong enantiomeric excesses of L-alanine (>50%) and L-glutamic acid (>30%) in Murchison and proved (by stable isotopes) that they were indigenous and extraterrestrial.11 These biomarkers indicate both biogenicity, because no known abiotic mechanisms form strongly chiral amino acids, and indigenicity, because modern biocontaminants would contain all 20 protein amino acids.

The enantiomeric excess of extraterrestrial chiral protein amino acids found in carbonaceous meteorites reveals biological activity in the parent body. The absence of 12 life-critical protein amino acids indicates that the cyanobacterial filaments found are indigenous rather than modern biocontaminants. I have just received precious samples of stomach milk (containing cyanobacterial filaments probably ingested during drowning) and liver, lung, and intestinal tissues from Lyuba, the wonderfully preserved 40,000-year-old baby mammoth from Siberia. Future research is planned to investigate the depletion of nitrogen, phosphorus, and chiral biomolecules in these ancient and undeniably biological tissues to further refine the use of these biodiscriminator methodologies for distinguishing valid microfossils from modern biological contaminants.

I thank Gregory Jerman and James Coston at NASA's Marshall Space Flight Center for SEM and EDS x-ray-spectroscopy support and Daniel Fisher, curator of the Paleontological Museum, University of Michigan, for providing frozen samples of stomach milk and tissues from Lyuba, which is now on display at the Field Museum in Chicago until 6 September 2010.

Richard Hoover, leader of the Astrobiology Group, has authored or edited 40 books, 300 papers, 9 species of bacteria, and 11 patents, and was 1992 NASA Inventor of the Year. He has led several polar expeditions in search of extremophiles and meteorites and was elected fellow of the Explorer's Club (Fellow National '01).