Temperature-cycling tests, as specified in standard 61215 of the International Electrotechnical Commission (IEC),1 are used to assess whether a photovoltaic (PV) module can withstand the temperature gradients occurring in different climates. Because the materials used for their fabrication have different temperature coefficients, stress occurs at the interfaces between those materials. In particular, the cell connectors are subject to such stresses because they undergo cyclic motion within the encapsulation material and may break as a result of material fatigue.

Under normal operating conditions, the maximum temperature difference occurring in a module over the course of a full day is determined by the change in temperature between night and day, and—even in extreme desert climates—rarely exceeds ΔT=70°C. Therefore, the temperature gradient of ΔTIEC=125°C (between −40 and +85°C) stipulated by IEC 61215 produces a far higher stress in the materials than is expected during use. Accordingly, this is an aging test, although the standard does not contain any factor that yields a direct correlation between outdoor exposure and temperature-cycle tests.

We extended the IEC tests, which are usually carried out for 200 cycles, until clear module degradation occurred. In particular, we tested crystalline-silicon PV modules from seven manufacturers for 200, 400, 600, and 800 cycles in a climate chamber. After undergoing thermal cycling, each module had to pass various tests, starting with a visual inspection and followed by measurement of current-voltage characteristics, determination of the internal series resistance, and two tests of how much insulation capability the modules retained. The process was completed with electroluminescence (EL) imaging to detect potential interruptions in the cell interconnection circuit.

Figure 1 shows the decrease in output power relative to the initial value for each of the seven modules after different numbers of temperature cycles. The power degradation after 200 cycles was 0 to 2.7%, staying below the limit of 5% allowed by the IEC. Following additional cycles, some modules underwent significantly greater degradation, and the differences between them became apparent. The resulting degradation after 400 cycles increased to 10.3%. After 600 cycles, we measured levels between 1.4 and 47.2%, the latter because of the electrical failure of an entire string in one module. Measurements after 800 cycles revealed progressive degradation in all modules. (Note that Module 3 was no longer included in this test, but no other modules showed severe electrical failure.) Three modules remained within the IEC degradation limits, even after 800 temperature cycles. 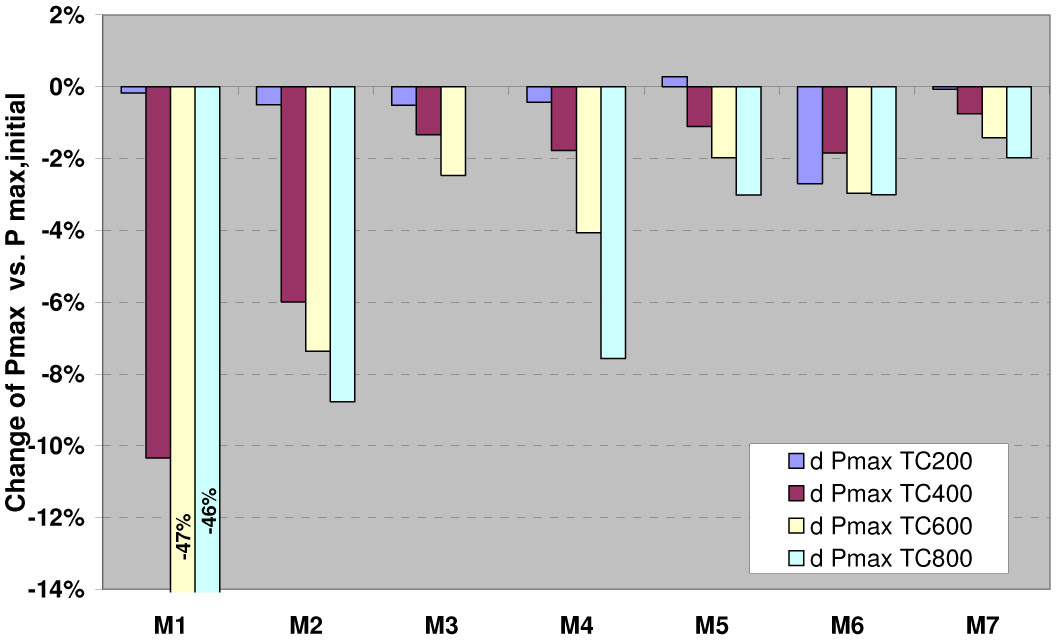 EL imaging can detect interruptions in cell connectors. Figure 2 shows EL images of Module 1, which showed the most significant degradation, in its initial state (left) and after 800 temperature cycles (right). Variations in the brightness of the cells indicate inhomogeneous current flow. Cell connectors within the darker parts of the cells are disconnected, resulting in strongly reduced light emission in those areas. The EL image of this particular module indicated 21 disconnections, while other modules exhibited breakage in fewer than 10 cell connectors. For three modules, no such defects could be detected even after 800 cycles. 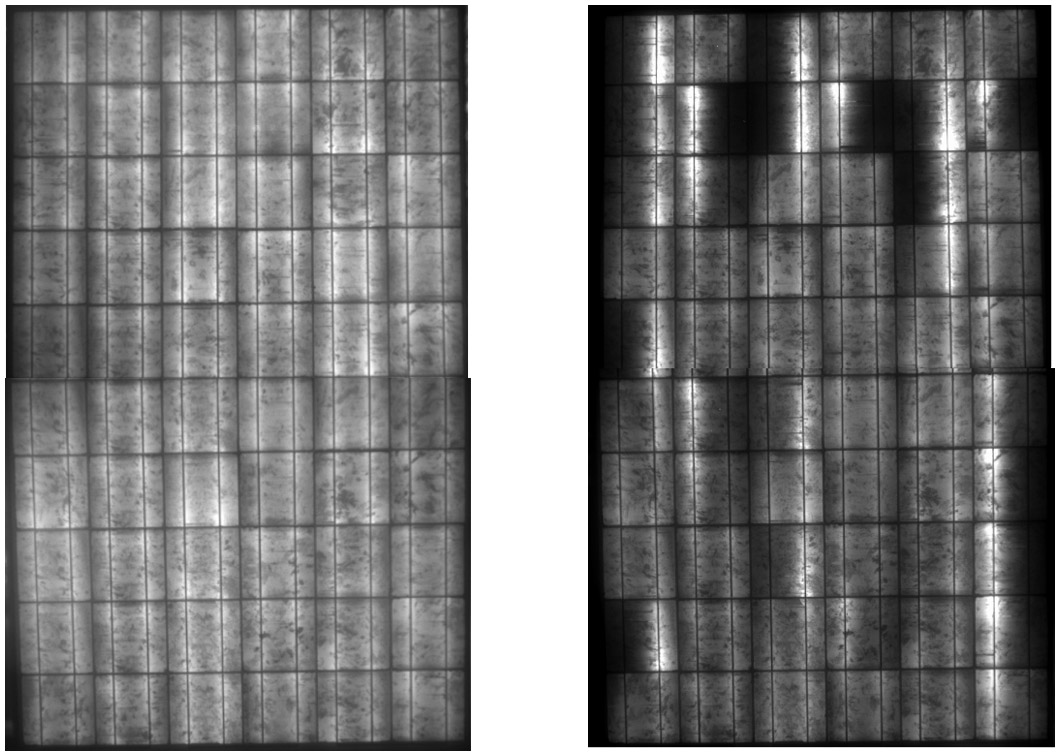 Figure 2. Electroluminescence images of one module in its initial state (left) and after 800 temperature cycles (right).

Additional power measurements and EL imaging showed that the pattern of interruptions in cell interconnects and module power can change when the front of the module is subjected to a mechanical load. Consequently, the EL records might not reveal all interruptions and the pattern could be random.

In summary, we showed that in temperature-cycling tests, breakage of cell connectors is the dominant factor in module degradation. The correlation between temperature-cycling tests and actual outdoor exposure requires further investigation. We plan to examine this by continuing an outdoor weathering project. We will also further develop our numerical simulation to better define a module's stress-free state and simulate the effect of thermomechnical stress on the internal wiring circuit.

Werner Herrmann studied physics at the Technical University of Aachen (Germany) and has more than 20 years of work experience at TÜV Rheinland in the field of renewable energy. He is responsible for applied PV research involving measurement and testing methods for electrical characterization and lifetime analysis of PV modules.