The ability of gold nanoparticles to act as efficient pointlike sources of both light and heat promises integrated functionalities for future point-of-care diagnostics and cancer therapies.
02 November 2010
Romain Quidant

Accurate control of light and heat is a recurring challenge in many fields of science, from data processing and materials science to medicine. The possibility of achieving such control down to the nanometer scale is especially attractive in the context of new generations of miniaturized integrated devices. In particular, in bioscience and medicine, taming light and heat at the scale of a single or a few molecules offers unique opportunities for manipulating and detecting molecules, bioimaging, and alternative cancer therapies. However, these technologies currently face fundamental physical limitations. Diffraction prevents concentrating light to dimensions much smaller than a fraction of its wavelength. Moreover, local heating at a point requires a thermal-contact-free configuration: i.e., one in which the heat source can be remotely activated. Researchers must find a way around these obstacles.

Nano-optics, and more specifically plasmon nano-optics, has the potential to address these challenges. Nanoparticles of noble metals support certain optical resonances known as localized surface plasmons (LSPs). These resonances have their origin in collective oscillation with the electromagnetic field of the metal free electrons. Coupling light to LSP resonances produces two main physical effects. First, the absorbed light concentrates at the surface of the nanoparticle, leading to intense, confined optical fields that provide a way around the diffraction limit. Second, energy dissipation into the metal gives rise to increased particle temperature, which solves the problem of remote heating. 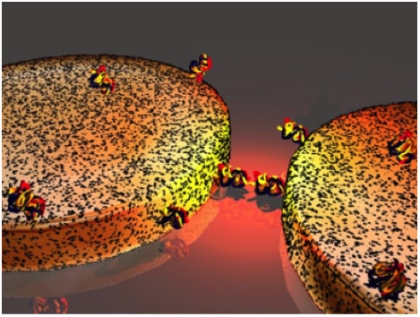 Here, we describe recent results of our efforts to engineer and optimize the optical and thermal properties of gold metallic nanoparticles. Our goal is to design efficient pointlike sources of light and heat as the basis for tools, including nano-optical biosensors, nano-optical tweezers, and treatments for cancer.

The latest advances in plasmon nano-optics show that the electromagnetic interaction between adjacent plasmonic nanoparticles enables concentration of light fields well beyond the diffraction limit. In particular, an antenna-like geometry (also known as a plasmonic dimer) makes it possible to concentrate light within the nanometer gap formed by two adjacent nanoparticles. We have shown that this effect can be exploited and optimized to design extremely sensitive biosensors. The core idea is to engineer the plasmon mode such that it becomes commensurable with the volume of the biological object to detected (see Figure 1). In addition to a fivefold increase in the maximum resonance shift induced by binding of target biomolecules at the metal surface, we are able to discriminate, with single-molecule accuracy, the number of biomolecules fitting across the gap region.1

Figure 2. Nano-optical trapping with optical antennas. (a) Optical configuration in which an array of gold gap antennas is illuminated by an unfocused near-IR laser beam. (b) Experimental near-field optical map of a single gap antenna at 800nm. (c–k) Time sequence of frames showing trapping and alignment of single living Escherichia coli bacteria on an array of antenna traps.

We also recently demonstrated how the punctual concentration of light in plasmonic nanostructures can be used to exert enhanced optical forces on tiny objects, trapping them at predefined locations of a patterned substrate. Our research shows that this novel generation of nano-optical tweezers allows parallel trapping of multiple objects, including biological specimens,2 and it applies to dimensions much smaller than permitted by conventional optical tweezers.3

Previously, heating in plasmonic nanostructures was treated as a side-effect of optics applications. Now, however, researchers are realizing the huge potential of using metallic nanoparticles as punctual heat sources, remotely controllable with laser light. In particular, local heating offers new opportunities to develop less-invasive cancer therapies, using laser illumination to selectively burn cancer cells fed with plasmonic nanoparticles. Our research over the last years has focused on studying and optimizing heat generation in such nanostructures. We investigated the influence of particle geometry and coupling between adjacent particles.4,5 We derived general rules to optimize heat nanosources, which we then tested experimentally using a novel thermal microscopy method recently developed in the group.6

In summary, we currently have enough tools based on nanoscale light control (such as ultrasensitive biosensors and ultragentle nanotweezers) to be able to work toward integrated point-of-care devices that biologists and physicians can use in cancer diagnostics. SPEDOC, a collaborative project supported by the European Commission, is an effort to develop these kinds of miniature analytical laboratories.7 In terms of nanoscale heat control, the first clinical trials based on gold shell structures are under way.8 As a next step in our own work, we plan to apply our understanding of heat generation in metallic nanostructures to improve the efficiency of hyperthermia for cancer therapy.