Nature's photosynthesis process far outperforms man-made light-energy-converting devices. The highly efficient mechanism for rapid separation and transfer of photo-excited charge pairs in the photosynthetic reaction center is a key step. In many thin-film solar-cell efforts, this charge separation is a critical challenge. In response, several fundamental studies have modeled nature's multistep charge-transfer process, which aids in precluding charge-pair recombination,1 or directly incorporated photosynthetic complexes into devices.2 Electrochemical solar-cell performance can also suffer from high light conditions or repeated exposures, damaging the donor dye molecules. Nature addresses this irreversible photodegradation elegantly by removing and replacing photodamaged components as often as once every hour.3 Our group has been working on development of photovoltaic nanostructures with synthetic analogs to nature's efficient charge-separation and regeneration processes, forming the basis for a new class of electrochemical solar cells.

Because of the combination of a high electron-accepting tendency and unmatched electrical-conductivity properties, carbon nanotubes have been subject of much attention in donor/acceptor nanohybrid studies.4,5 These aim to develop optimized hybrids of molecular donors and acceptors, the foundation for electrochemical solar-cell devices. Figure 1 shows a generic energy diagram of such donor-acceptor nanohybrid cells. Previously, several carbon-nanotube structures were examined, relying on either covalent or noncovalent interactions with donors such as porphyrins,4 ruthenium-based complexes, or semiconductor nanocrystals.5 We have developed new strategies using highly functional biomolecules for direct noncovalent aqueous solubilization and functionalization of carbon nanotubes, preserving their electronic structure and unique properties. These biomolecules bind the donors with acceptors, and facilitate charge transport and regeneration. 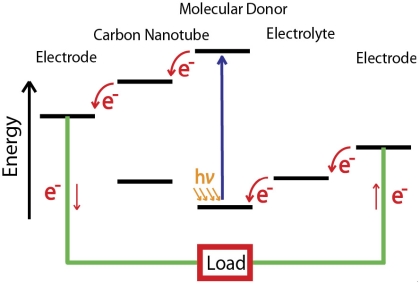 In one approach, we explored using a combination of nanomaterials with natural molecules. We grafted natural photosynthetic reaction centers directly onto carbon-nanotube hybrids. Upon addition of chemical triggers, these complexes dissociate from the nanotube, and damaged components are replaced before reassembly. Thus, the associated photoactive hybrid can be disassembled into photo-inactive and reassembled into photo-active states based on a single chemical signal. This process mimics that in biological systems, where damaged systems are disassembled, repaired, and reassembled to restore functionality. Recently, we successfully incorporated these natural photosystems into carbon-nanotube hybrids and demonstrated clear photocurrent on/off switching by controlling the active and inactive (repairing) states.6

In our all-synthetic approach, synthetic biomolecules, such as short-stranded DNA/RNA sequences,7 replace the natural photosystems in the carbon-nanotube hybrids. Self-assembly, specific molecular recognition, and high affinity for the sp2 lattice of carbon nanotubes make oligonucleotides excellent structural elements. The oligomers are used as the glue in the self-assembly of the nanohybrid, grafting onto the nanotube surface and attaching to the donor chromophores (see Figure 2). The structure of the sequence is designed to have strong target-binding affinity with donor molecules, typically porphyrin derivatives, placing them in close vicinity for charge transfer into the nanotube acceptor. By varying the size of the biomolecule, it is possible to control the intermolecular distance between donor and acceptor, a critical aspect in charge-separation and recombination kinetics. Additionally, by changing the local environment, the structure of the biomolecule can be altered, modifying the binding conditions with the donor and allowing for removal and replacement with fresh donor molecules for optimal photoconversion. 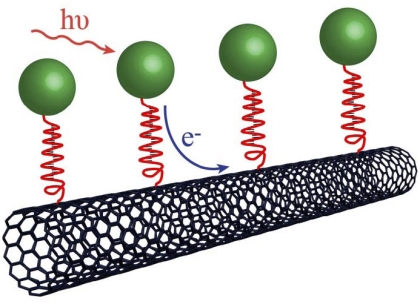 In these nanohybrids, strong electron-transfer interactions are seen from the photo-excited electron donors to the carbon nanotubes. In the presence of nanotubes, photo-excited electrons in the conduction band transfer into the carbon nanotube's conduction band rather than fluorescing back to the valence band. As a result, the fluorescence signatures of donor samples are strongly quenched with increasing presence of carbon nanotubes. Over 90% of the donor fluorescence is quenched, freeing these electrons for harvesting (see Figure 3). 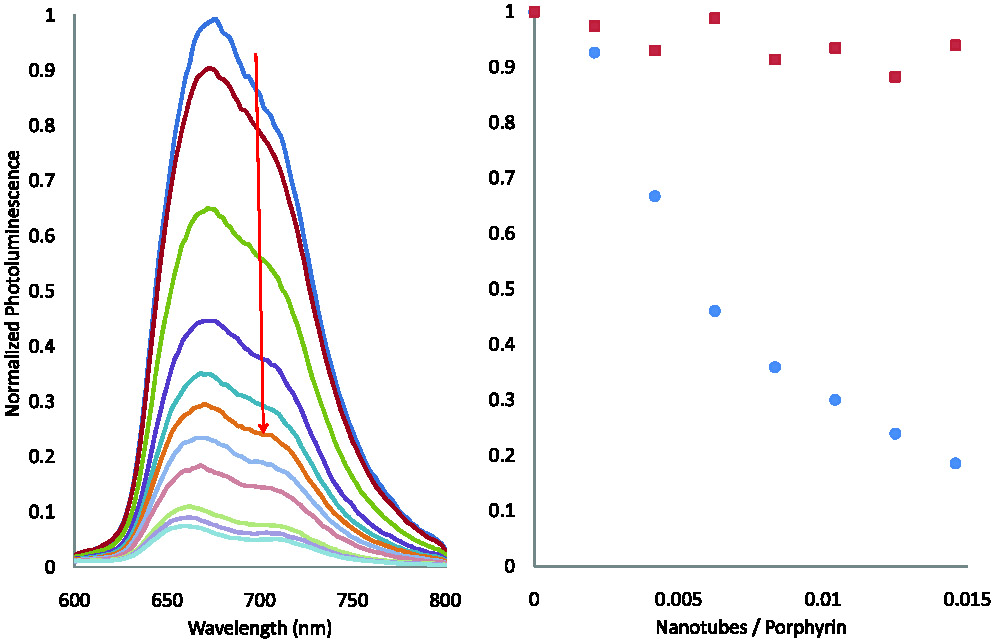 Over billions of years, nature has developed highly efficient solar-energy-harvesting mechanisms that power the natural world. We draw inspiration from these systems, exploiting extraordinary properties of biomolecules and nanomaterials to develop devices with new levels of functionality and environmentally friendly manufacturing techniques. These nanohybrids have the potential for regeneration and multiple degrees of tunability. We are working on tuning the biomolecule and donor structures to optimize electron transfer, with the next steps being implementation into electrochemical photovoltaic cells.

We acknowledge Purdue University for support.

Jong Hyun Choi is an assistant professor. He received Bachelor's and Master's degrees from Yonsei University (South Korea) in 1999 and 2001, respectively. He gained a PhD in mechanical engineering from the University of California, Berkeley, in 2005. His interests are in nanoscale devices for energy conversion and biomolecule-based diagnostics/therapeutics.

Benjamin Baker is a graduate student. He received his Bachelor's degree from Purdue University in 2009 and is recipient of a 2010 National Science Foundation Graduate Fellowship.

Tae-Gon Cha is a graduate student. He received his Bachelor's and Master's degrees in mechanical engineering from Seoul National University (South Korea) in 2007 and 2009, respectively.

Yujun Wu is an undergraduate researcher in mechanical engineering.

Dane Sauffer is an undergraduate researcher in chemical engineering.