A new strategy enables development of untethered microtools that function on exposure to specific biochemicals and without the need for any electrical power.
15 September 2010
David Gracias

Key challenges in microscale engineering include development of inexpensive mass-fabrication techniques and the ability to deploy large numbers of untethered tools and devices with moving parts. There is a need for such structures in applications related to reconfigurable and lab-on-a-chip devices, tagging and tracking, micromanufacturing, and surgery. The small size and absence of attached wires or tethers of any kind makes these tools especially useful for applications that require deployment in hard-to-reach spaces.

While electrical wiring of microtools fixed to a substrate is fairly straightforward, creating wireless microtools is significantly more challenging. Hence, as an alternative to electrical actuation, we have been exploring the use of chemistry to trigger motion. We refer to the resulting devices as microchemomechanical systems (MCMS), since they are analogous to micro-electromechanical systems (MEMS), except that they function upon exposure to chemicals instead of electrical power. Chemical-based actuation of mechanical structures is intellectually intriguing, since it is widely observed in biological actuators1 and enables autonomous functioning with high selectivity and specificity.

Our approach has focused on developing biosensing hinges that bend only when they are exposed to specific biochemicals. They can be interconnected with other structural or functional modules using conventional lithographic processes to construct tools (such as grippers) that close or open when exposed to biochemicals. Our biosensing-hinge concept is based on stacking multiple layers of thin films (see Figure 1). The concept's essential element is that one or more films (which may also be pre-stressed) within the hinge undergo a mechanical transformation when exposed to the chemical of interest. We have been exploring interfacial modification, bulk dissolution, molecular-chain scission, and swelling. Hence, the hinge functions like a chemical sensor and it responds by bending. The chemicals of interest are disease markers and threat agents. 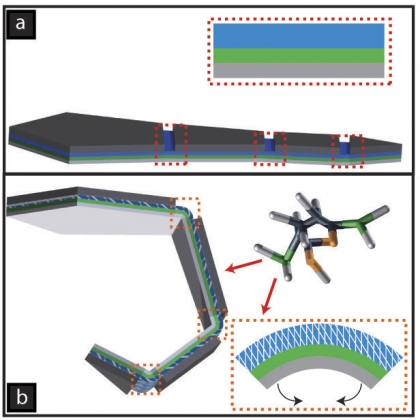 Figure 1. Concept showing a biosensing-microtool component composed of rigid functional elements and hinges (a) as fabricated and (b) on exposure to L-glutamine. This causes the hinges to bend, thereby leading to a concerted motion. (Credit: Aasiyeh Zarafshar, Gracias Laboratory, Johns Hopkins University: JHU.)

As a proof of concept, we have focused on microgripper architectures, but it is conceivable that these hinges could be used to create other tools, such as cutters and clamps. In one demonstration,2 microgrippers closed when exposed to biochemicals such as L-glutamine, trypsin, cell media, and glucose. In addition, we introduced ferromagnetic elements into the grippers so that they could also be moved from afar using permanent magnets. Using these tetherless tools, we managed to excise cells from a bovine bladder sample from within a narrow tube (see Figure 2). These demonstrations highlighted the possibility of using these tools to perform noninvasive surgeries,2 and we are exploring in vivo applications. 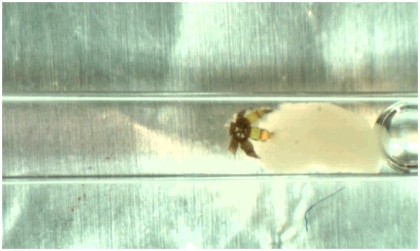 We have also demonstrated3 MCMS microgrippers for pick-and-place operations. These tools close and open when exposed to common chemicals such as acetic acid and hydrogen peroxide. We have achieved reversible actuation of hinges resulting in closing and opening of microgrippers over multiple cycles using surface modification based on oxidation and reduction of copper films (see Figure 3).4 Our proof-of concept demonstrations are a step toward the creation of automomous miniaturized devices and structures that are inexpensive, mass-deployable, and—most importantly—sense and reconfigure themselves in response to specific biochemicals.

Future challenges abound. First, there is the engineering challenge of integrating heterogeneous materials such as metals, polymers, and gels to structure these miniaturized tools using mass-producible lithographic processes. This involves considerable challenges in material selection, especially with respect to etch compatibility, and further modifying polymers and gels to make them photopatternable. Improvements in sensitivity and selectivity are needed to mimic the capabilities of commercial chemical sensors. Reversible biochemical actuation over multiple cycles is challenging under physiologically relevant conditions and at room temperature.

Further, compared to MEMS actuation, our MCMS devices can have slow response times, on the order of several seconds to hours, depending on the chemical composition of the biochemical and the sensing film. This response is especially long when the chemical needs to diffuse through the entire film to elicit a bulk mechanical change. However, note that the slower response times may be acceptable in many of the applications of interest. Finally, we continue to explore extreme miniaturization of curved nanogripper-like structures.5 In our previous published demonstrations, we used microgrippers as small as 700μm when open and 190μm when closed. Further miniaturization to the submicron and nanoscale would allow for new applications, especially in surgery.

David Gracias is an associate professor of chemical and biomolecular engineering. He received his PhD from the University of California at Berkeley in 1999. The unifying theme of his research is the science of miniaturization and the interface between engineered and living systems.