Concentrating photovoltaic (CPV) systems contain small, sophisticated solar cells that transform a large amount of Light collected and directed onto the cells into electricity. CPV systems offer higher conversion efficiency than conventional, flat-plate solutions (>30% using current multi-junction solar cells) and reduce the number of cells needed. The result is a decrease in total energy cost, as long as the cost and complexity of the additional elements (optics, heat sinks, and tracking system) are reasonable. CPV is, therefore, one of the most promising options for development of the solar-energy market.

A useful merit function for CPV optical design is the effective concentration-acceptance product (CAP*), defined as CAP* = (Cg)12sin α*, where Cg is the geometric concentration ratio (which describes the actual reduction in cell usage achieved) and α* is the effective acceptance angle (the incidence angle at which the concentrator collects 90% of the on-axis power as measured by actual photocurrent curves). CPV systems with high CAP* outperform low-CAP* designs and more likely achieve competitive energy-generation costs. For a given concentrator architecture, the CAP* is rather constant with Cg and can be considered an attribute of the architecture: increasing Cgimplies a reduction of α* and vice versa. The CAP* of the FK architecture is the highest reported among concentrators based on flat Fresnel lenses.1 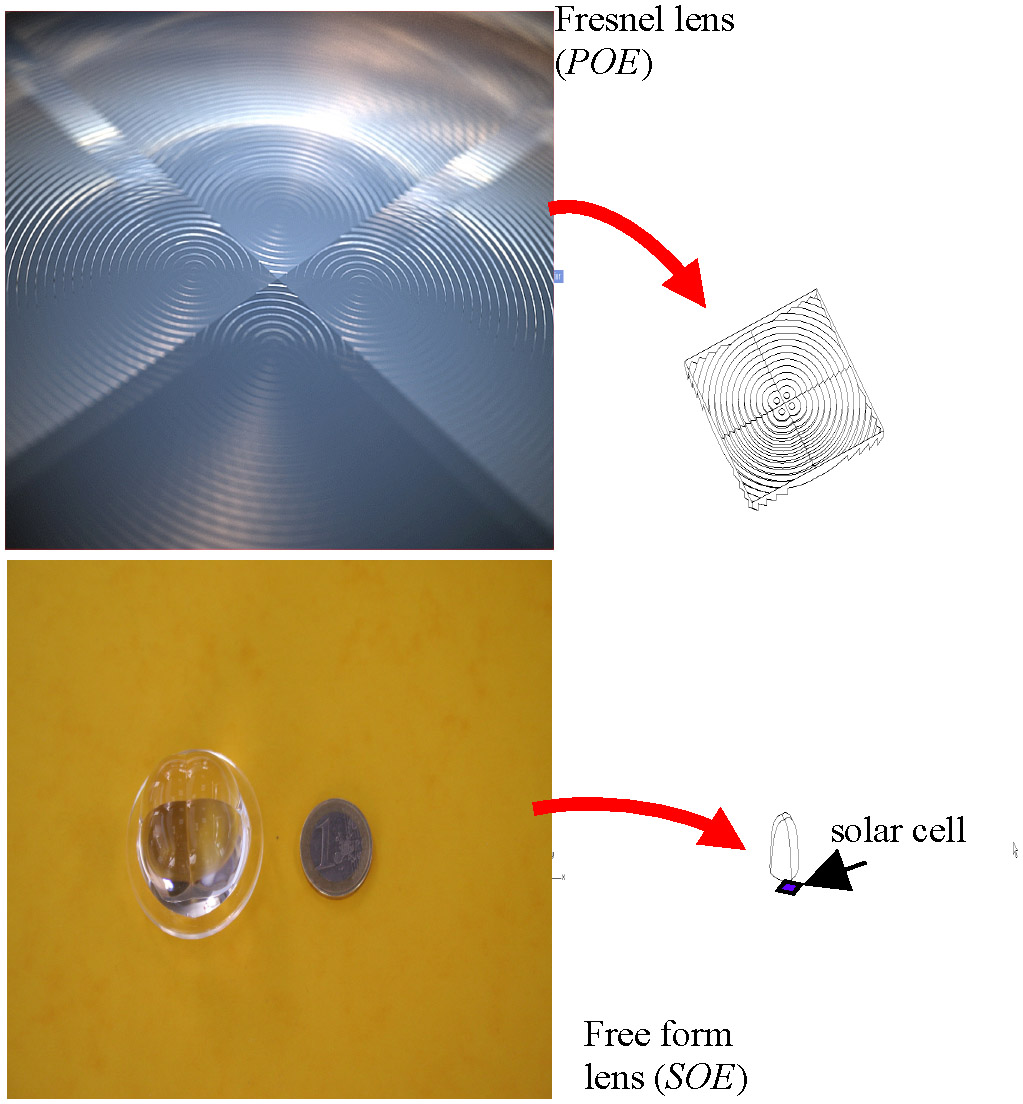 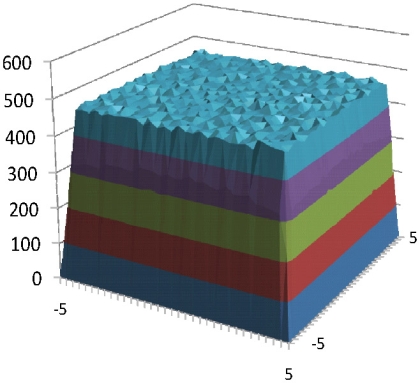 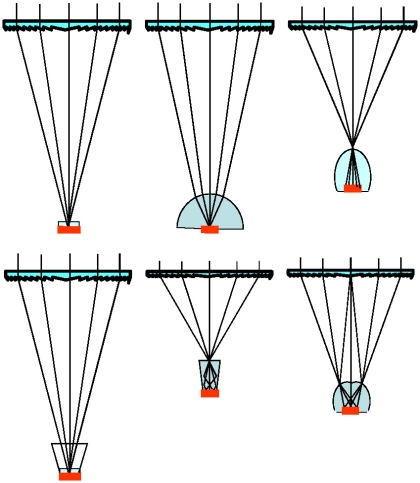 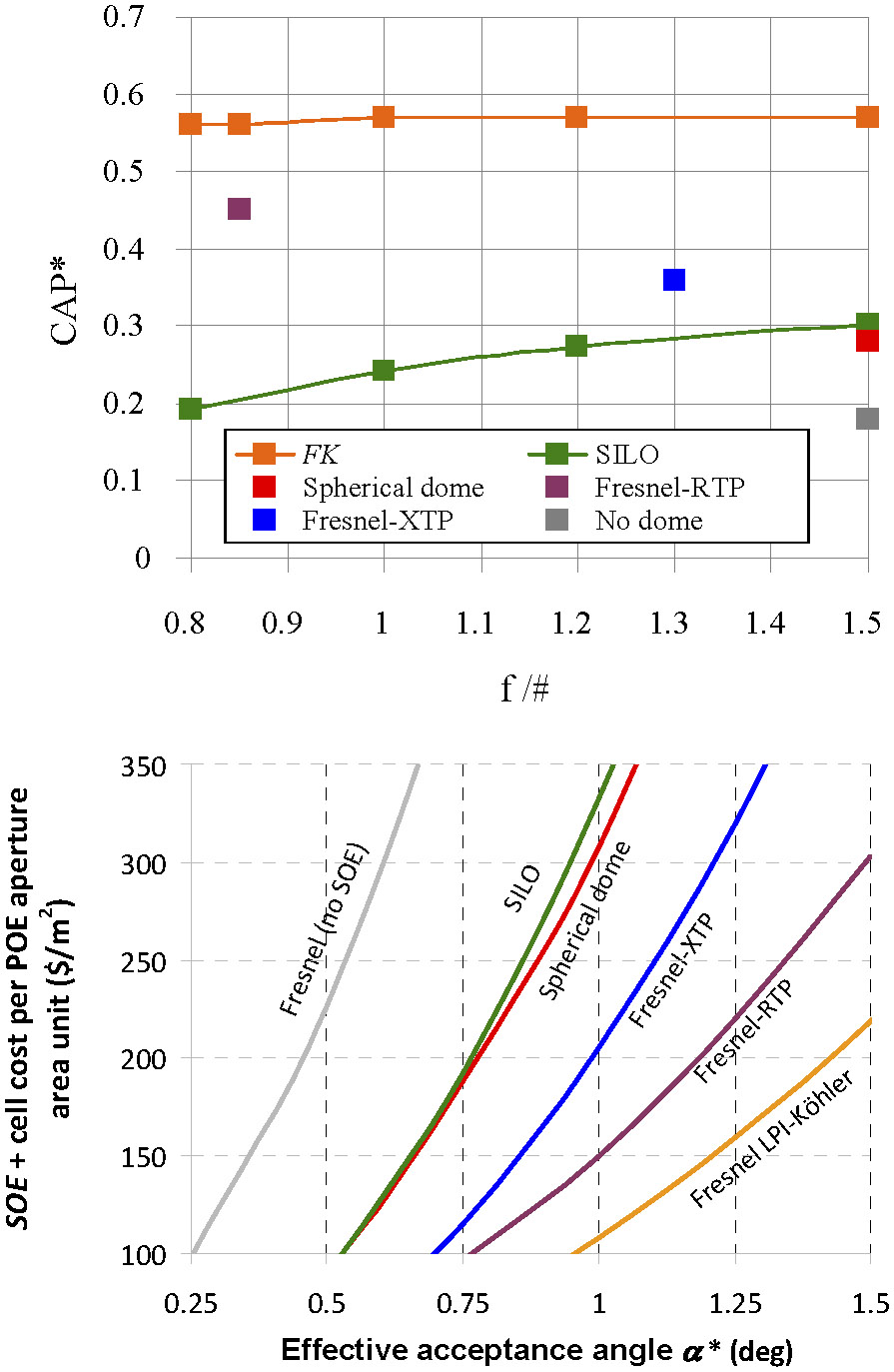 We compared the FK concentrator's performance with those of five commercial Fresnel-based CPV designs (see Figure 3). From left to right, we show ray traces for Fresnel-lens systems with no,3 hemispherical glass-dome,4single-optical-surface,5 and hollow reflective6,7 and dielectric-filled truncated-pyramid concentrators,8 as well as the FK concentrator. Figure 4 (top) shows that the FK setup outperforms all competitors in terms of CAP* achievable, especially in compact (low f number, defined here as the ratio between Fresnel-lens-to-cell distance and Fresnel-lens diagonal) systems. FK optical efficiency at normal incidence ranges from 88 to 90% for a large range of f numbers, provided that an antireflective coating is used on the SOE. The resulting CAP* is approximately constant for most f-number values (CAP* ≈0.57 and 0.61 without and with perfect coating, respectively).

We also performed a partial system-cost comparison by looking at the ‘receiver’ (cell+SOE) cost for each of the six designs, based on real SOE costs from glass suppliers9 and assuming that cell price is proportional to area (at $7/cm2). Figure 4 (bottom) shows that the FK design produces the cheapest receivers, especially when we consider a moderate-tolerance-angle scenario (α*>1°), which is required to attain reasonable energy production throughout the year at competitive costs.

In summary, FK concentrators are simple but reliable and robust high-performance devices that are suitable for mass production. We expect them to demonstrate economic feasibility very soon. Our continuing efforts range from feasibility studies and design to prototyping and characterization. The first prototypes measured perform as expected (efficiencies >30% and acceptance matching the models). Depending on market evolution and full-system performance, it is likely that at least one CPV system comprising FK devices will be ready for commercialization within a year.

Pablo Zamora received his degree in telecommunications engineering from UPM in 2005. He is currently a researcher in the Electronic Physics Department. His research is focused on optics design, manufacturing, and testing of nonimaging devices, with application to photovoltaic solar energy.

Pablo Benítez is professor of electronics, optical communications, and optics. He has published many papers on nonimaging optics and is co-inventor of the 2D and 3D simultaneous-multiple-surfaces nonimaging optical-design methods.

Juan Carlos Miñano, professor of electronics (chair), optical communications, and optics, was the 2010 recipient of SPIE's A. E. Conrady Award for his work on nonimaging optics.

Marina Buljan is a PhD student.

Rubén Mohedano joined LPI-Europe in 2002 and has led more than 20 projects since, mostly in CPV and illumination applications. His research is focused on nonimaging-optics design, manufacturing, and applications.