Metamaterials research has proved a very dynamic and fruitful area, in part because the first predicted phenomena were counterintuitive and ignited (at times) spirited debate. In addition, it inspired researchers to explore optical phenomena in entirely new parameter ranges.1 Originally, ‘metamaterials’ referred to homogeneous and isotropic composites with negative field-constitutive coefficients. Dielectric functions, ε, with negative real values are common for metals at frequencies below the plasma frequency. In fact, the description of phenomena associated with metals is often referred to as plasmonics. Negative real values of the magnetic permeability function, μ, are difficult to achieve. Therefore, enabling a magnetic response has resulted in a very intense effort. Materials with negative real values of both ε and μ are often referred to as a negative-index materials (although other names are also used). For this reason, metamaterials are often described as possessing engineered electromagnetic responses that are generally not found in nature. Associated effects include negative refraction, negative phase accumulation along a path, and superresolution. Superresolution, first described by Sir John Pendry,2 drew a lot of attention in several scientific communities and became somewhat of a ‘holy-grail pursuit’ akin to the search for a full bandgap for photonic-crystal designs.

Initial work into metamaterial phenomena gave birth to a new field of transformational optics,3 which first exploited a deep connection between different topologies using conformal mapping. The first applications were cloaking phenomena that conceal an object within a shell of inhomogeneous materials. This is the concept of mu-metal (high-μ nickel-based alloys) shields for isolating a spatial region from magnetic fields. Transformational optics has since given way to applications derived from different fields, including electromagnetically induced transparency from quantum optics and optical black holes from gravitation theory.

Metallodielectrics (MDs) are composite materials—with one component consisting of a metal—that can elicit plasmonic effects. They have found technological applications in commercial products, but over the past decade they have been revisited to explore unusual phenomena in the context of metamaterials. Early work demonstrated that MDs are highly transparent over a wide range of wavelengths, where metals are opaque. The layered-MD approach allows hundreds of nanometers of layered MDs to become transparent even in the mid-wave IR regime and beyond with carefully chosen design parameters.

The suggestion that metal films alone could demonstrate superresolution in the near field came from the same seminal paper by Sir John Pendry.2 Subsequent experiments demonstrated this effect in the UV.4,5 This result piqued our interest to achieve superresolution using MDs that would overcome the drawbacks of pure metal films, with opacity chief among them. Our calculations and experiments show that MDs composed of periodic films (also called photonic crystals) have a high signal throughput and are excellent candidates for widely tunable superresolution devices.6 Simulations identify two superresolution regimes, a focusing regime at the edges of the passband, with no surface-plasmon excitation, and a beam-channeling or superguiding regime at the center of the passband (see Figure 1) that favors the onset of transverse surface plasmons.7 MD photonic-crystal structures are thicker than single metal layers. They contain more metal and have higher transmission. 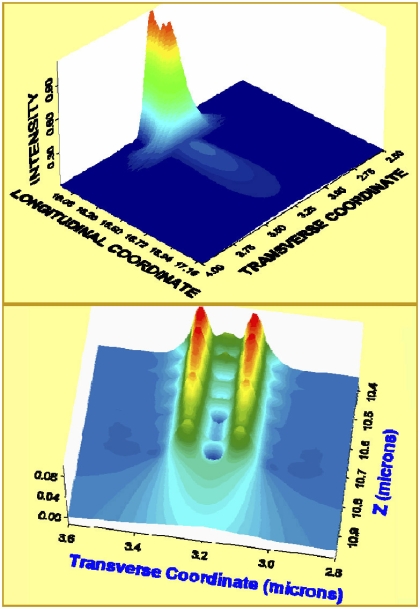 Figure 1. Transmission through a metallodielectric photonic crystal (the layers are parallel to the transverse coordinate) in the focusing regime. (top) Formation of an external focal spot. (bottom) Two closely spaced λ/20 channels (λ: Wavelength) that do not interfere thanks to the formation of transverse plasmon waves (superresolving regime). Z: Vertical coordinate.

MD photonic-crystal structures also display slow group-velocity effects that can be exploited to enhance nonlinear effects. Group velocity is a measure of how long the field can remain and interact in a medium. Thus, lower group velocities are effective in accumulating more nonlinear phase and amplitude effects. MDs give access to nonlinear effects in metals because the field penetrates the entire structure. This includes providing access to metal nonlinearities, which are the largest known nonlinearities of any materials. MDs made from copper and silica have reported third-order nonlinearities with effective-index variations on the order of 0.1 by designing samples with fields localized in the metals.8 However, high transmission does not have to be sacrificed at the expense of field localization. We showed that by chirping the layers and employing higher-index dielectric film, transmittance can be higher while retaining field localization and considerable optical-limiting capabilities across the entire spectrum.9

The third-order, nonlinear metal coefficients are several orders of magnitude larger than those of ordinary semiconductors, and nonlinear effects are enhanced beyond those achievable for ordinary materials. We predict giant phase-modulation effects and nonlinear absorption.10 Second-harmonic generation, which in metals is attributable to a combination of surface and bulk contributions, has been observed in MD photonic crystals.11 Access to bulk-metal nonlinear properties combined with design and control of the field distribution inside the stack will enable a more detailed understanding of the underlying physical origin of optical nonlinearities in metals and their technological applications.

Joseph Haus is a Fellow of SPIE, the Optical Society of America, and the American Physical Society.

Michael Scalora is a fellow of the Optical Society of America.