Optical engineering and the argument for agrisolar dyes

Coupling dyes derived from the fruit of the Phytolacca genus to the light-confining architectures of fiber devices more than doubles photovoltaic performance.
08 July 2010
Pamela Wang, Wanyi Nie and David Carroll

Arrayed 3D structures (such as fibers, wires, or V-shaped grooves coated with photoactive absorbers) have attracted much attention in the photovoltaic (PV) community. The optics of such structures may allow enhanced light capture into the PV process. Generally, two different classes of these 3D PV structures are the subject of research interest. The first is based on aligning nanomaterials—nanowires or nanocoaxial structures—within the absorbing medium. Ideally, optical confinement in such structures originates from scattering between the arranged objects in a loosely defined ‘photon localization.’1 This could be termed a ‘near-field’ approach, for which many excellent and promising examples exist, such as tellurium-doped cadmium selenide (CdSe/Te)2 and germanium/silicon (Si),3 as well as carbon nanotubes used with Si.4 The second, more recent approach, is to achieve confinement using optical structures that are larger than the wavelength of light.5 This ‘far-field’ approach confines the optical energy by partitioning it into the modes of an optical cavity and has typically been associated with the use of high-performance solid-state absorbers yielding examples such as very-high-efficiency solar cells.6

Although, at a very fundamental level, these two approaches are somewhat equivalent, their implementation is quite different. In the last year, significant advances have been made in the far-field approach of light confinement using fiber-based PV geometries.7 In this context, a PV absorber is wrapped around a fiber optic that is illuminated through the end of the fiber. Energy is thereby transferred into the modes of the fiber, which effectively leaks the radiation into the outer photo-active cladding: see Figure 1(a). Among the most important realizations has been that light normal to the fiber's face is mostly within its numerical aperture and, therefore, couples into the corresponding transmission modes.8 This means that the light enters and leaves the fiber without being absorbed. However, the efficiency of a PV device is defined for this normally incident light only. Therefore, an apparent increase in performance is observed in fiber devices as the angle of incident light is varied. We have shown that this can lead to nearly doubling the overall power generation of the device over the angular swing of ±25° (where 0° is normal incidence). This means that for even a relatively poor absorber, the fiber architecture has the potential to double its performance up to the flux limit the absorber allows. In the model system poly-3-hexylthiophene:[6,6]-phenyl-C61-butyric acid methyl ester (commonly known as P3HT:PCBM), the increase in PV performance for fiber devices has been impressive, and we anticipate even greater gains using the new generation of low-bandgap polymers. 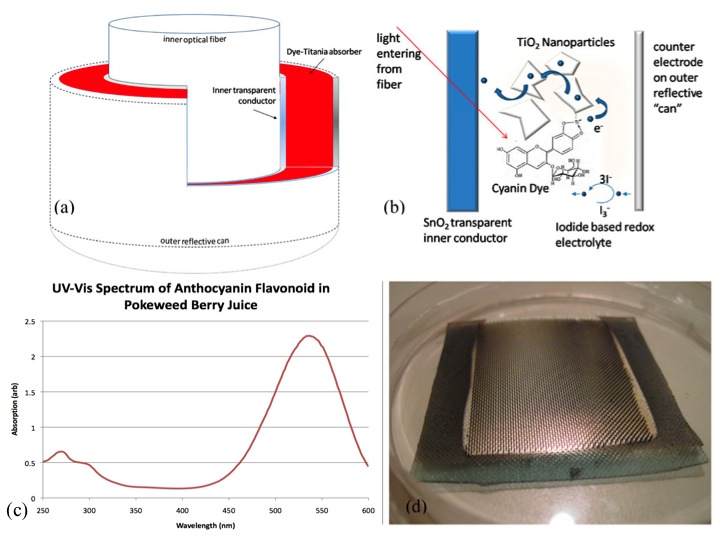 Figure 1. (a) Building block of the fiber-device optical trapping ‘can,’ which is arrayed into large sheets. (b) Basic absorber of the plant-dye fiber device. TiO2: Titanium dioxide. SnO2: Tin dioxide. I−, I3−: Iodide, triiodide ions. (c) UV-visible absorption spectrum (in arbitrary units) of the pokeweed-derived dye. (d) A 4×4inch2 arrayed fiber-device sheet.

These polymers can be expensive and while they hold much promise for developed economies, their cost represents a barrier to developing economies. It is, therefore, natural to ask whether low-cost, plant-derived dyes may be used effectively in such architectures. This could lower the cost of solar cells while enhancing the economic incentives for production of such agrisolar crops locally. The use of plant-extracted dyes in solar collection was pioneered by Nerine Cherepy's team and others in the late 1990s for use in the electrochemical Graetzel cell.9Conversion efficiencies of 2.6 and 0.8%9,10(chlorophyll and blackberry-derived dyes, respectively) have been demonstrated. Many colored plants contain high levels of flavonoids or sugar-bound polyphenols, which are responsible for their bright purple and red colors. Of these flavonoids, anthocyanin dyes are easily chelated to nanophase titanium dioxide (as in these early studies) by simple crushing and filtering processes: see Figure 1(b).9 Phytolacca abyssinica, commonly referred to as ‘pokeweed,’ is particularly promising: see Figure 1(c). It is extremely drought tolerant and found on nearly every continent on earth. It grows wild throughout the US and requires little to cultivate. When dyes derived from the fruit of the Phytolacca genus are coupled to the light-confining architectures of fiber devices, we have shown that PV performance can be more than doubled: see Figure 1(d).

With continued optimization of processing, the performance of such dyes will certainly continue to improve. However, note that the leaves of such plants are used as food crops and medicinally in many cultures (only the seed is toxic), making this a dual-purpose crop. Thus, cultivating agrisolar crops is not displacive, since different parts of the plant are used for different purposes. Its impact on developing economic communities can be large, with a normalized $/acre yield rivaling that of many cash crops such as tobacco and sugar. Based on these results, we suggest that a potential route to aiding sustainability in developing economies may be found in such dual-role agrisolar approaches. We are currently developing a faster and cheaper route for purification of the plant-derived extracts, thereby increasing cell efficiency at little cost.

Pamela Wang is an undergraduate physics major. She will be attending graduate school in physics at Case Western Reserve University beginning in the fall of 2010.

Wanyi Nie is a PhD candidate in physics. She has published numerous papers on fiber-based architectures for solar collection.

The Center for Nanotechnology and Molecular Materials is dedicated to addressing the needs of humanity from health care to green-energy technologies. The Center holds numerous patents on solar-collection technologies.