Optical biosensors typically require complex engineering and multistep fabrication strategies, which make them expensive and difficult to service. For example, to fabricate a very popular plasmonic sensor, one starts with a polished glass prism, then deposits a nanometer-thick metallic layer, activates the surface with bio- or chemical receptors, and finally installs a prefabricated optofluidic system that allows simultaneous optical interrogation and analyte flow. If one could produce a complete biosensor in a single step, this would have a significant impact on its commercial viability.

Photonic-bandgap (PBG) fibers might offer a way of achieving this without compromising sensitivity or the ease of microfluidic integration. PBG fibers are a subset of photonic-crystal fibers (PCFs), which are typically fabricated by stacking tubes, rods, or multilayered structures into a macroscopic preform several centimeters in diameter and tens of centimeters long. The preform is then melted in a furnace at one end and drawn out to form a microscopic fiber. Finally, the resultant fiber can be chopped into disposable pieces of the required length for interrogation using a sensor system. PCFs containing very complex transverse micro- and nanostructures can thus be created (see Figure 1). Remarkably, various material combinations—such as biofunctional polymers, low-melting-temperature metal alloys, and optical plastics—have already been successfully tried in various combinations to make optical fibers. It is likely that complete bio- and chemical sensors fabricated in a single drawing step will soon be demonstrated.

PBG fibers are used in industrial laser-assisted cutting and laser surgery, which require the hollow core to be filled with gas to guide high-power laser light over a distance of several meters. Other applications, which rely on guiding terahertz (THz: far-IR) light over a similar distance, include nondestructive quality control in the electronic and food industries and low-health-risk (nonionizing radiation) scanners for public-transportation security. These applications are impossible to achieve with standard total-internal-reflection fibers because of the high absorption of materials in the THz region. In addition, filling hollow-core fibers with functional liquids such as liquid crystals has enabled development of tunable optical filters and variable optical attenuators. 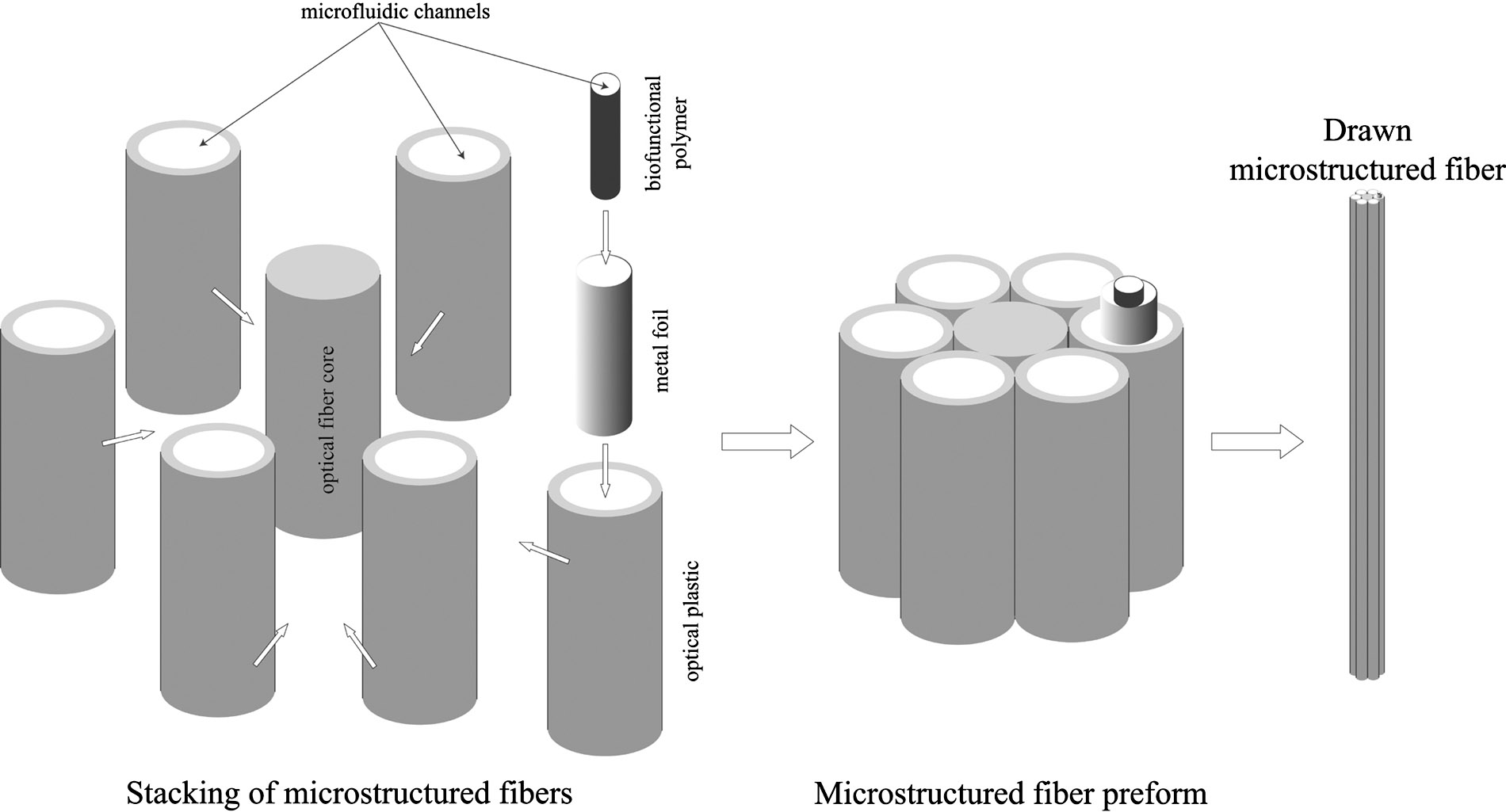 Figure 1. Fabrication of a complete biochemical sensor in a single drawing step using the stack-and-draw technique.

Recently, analyte-filled hollow-core PBG fibers have seen increased interest for use in sensing applications. For example, considerable research has been conducted in PBG-fiber-assisted gas sensing in both the visible and near-IR regions. Unlike regular optical fibers that guide light in the optically dense core surrounded by an optically less-dense cladding, a PBG fiber uses a completely different confinement mechanism. The fiber core can be made of any material, even a vacuum, the core is then surrounded with a dielectric mirror (usually in the form of a periodic multilayer) that exhibits low optical-absorption loss, while being highly reflective in a certain frequency range. An obvious advantage of PBG fibers for sensing applications is that their hollow cores can be filled with analyte, thus resulting in a very strong optical overlap between fiber mode and analyte material. We recently discovered1 that PBG fibers and waveguides offer several important advantages for the design of resonant sensors that detect changes in the real part of the analyte's refractive index, rather than in the analyte's absorption.

In most of the reported detection schemes, gas concentration is inferred from the strengths of specific absorption lines in the gas spectrum. The modal optical properties are expected to be highly sensitive to changes in the analyte's refractive index because the same core is used for guiding light and flowing analyte. In addition, the fraction of the modal field in the analyte region is close to 100%. Most sensor designs based on analyte-filled PBG fibers detect changes in the analyte's absorption loss (the imaginary part of its refractive index). By coiling a long section of a PBG fiber, one can achieve relatively compact, highly sensitive sensors that detect changes in absorption. Typically, such sensors would detect several absorption lines specific to a target analyte and its concentration could then be inferred from calibration measurements.

In resonant sensors, one typically employs fibers with strongly nonuniform spectral transmission characteristics that are sensitive to changes in the real part of the analyte's refractive index. Resonant sensors can detect minute changes on the order of 10−6–10−4 refractive index units (RIUs). Such sensors are currently actively being explored for use in label-free bio- and chemical sensing. In their most basic form, such sensors are nothing but highly sensitive refractometers. Specificity for the detection of a target analyte comes from biofunctionalization of a sensor surface.

Although there are many possible implementations of guided-wave refractometers, PBG fiber- and waveguide-based resonant optical sensors of the analyte's refractive index have recently attracted strong interest. This is because of their unmatched flexibility in designing the modal-dispersion relation, development of novel PBG-fiber types, and development of techniques for the activation of the fiber microstructure with functional materials. We have developed two novel types of sensor (see Figure 2). 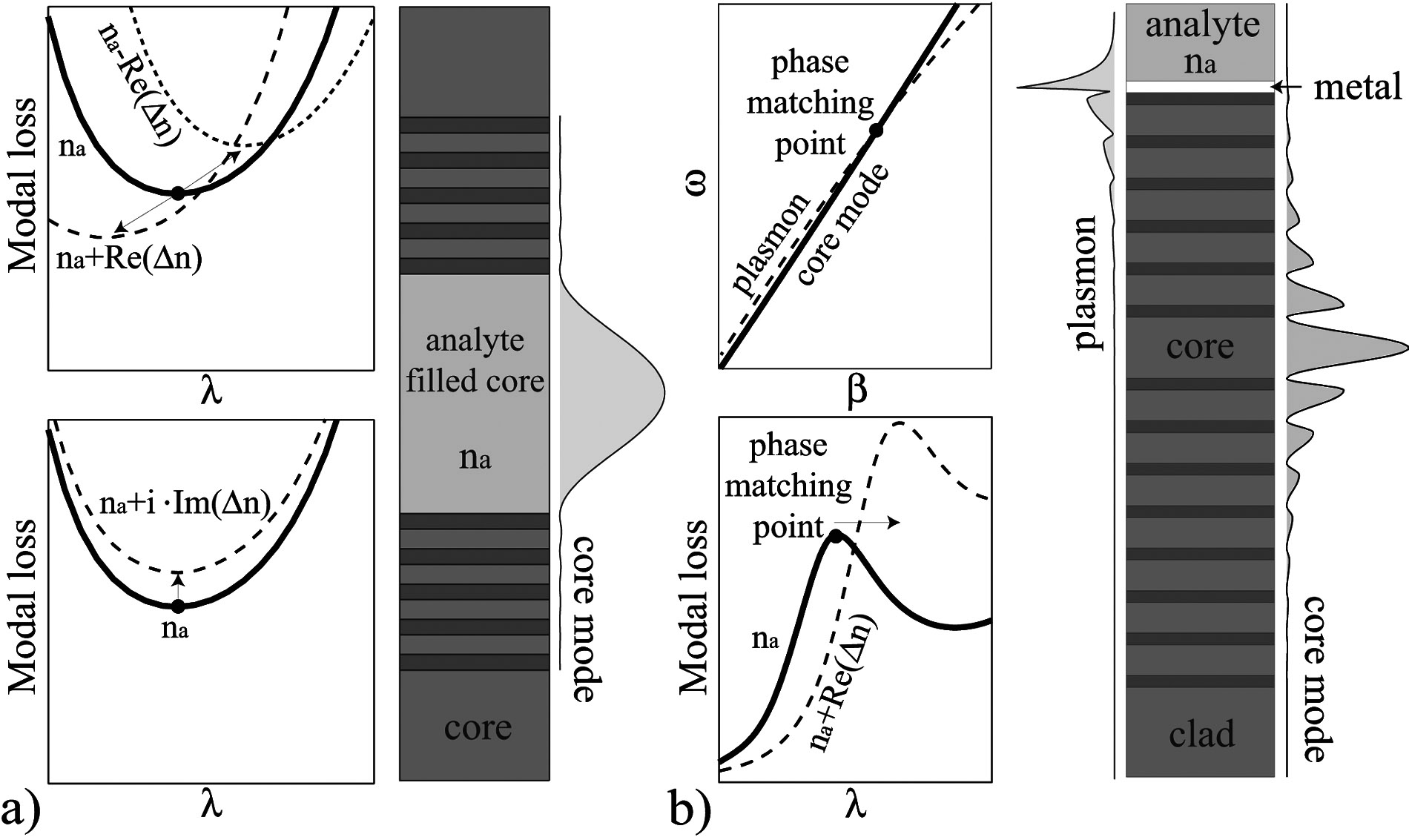 The first employs hollow-core PBG fibers, where the core-guided mode is confined to the analyte-filled core by the surrounding periodic reflector: see Figure 2(a). The geometry of such a fiber is chosen to provide strong optical confinement of the guided mode in the analyte-filled core for a particular value of an analyte's refractive index. If the real part of the refractive index changes, the resonant condition for mode confinement will also change. This will result in strong variation of the fiber's transmission loss: see Figure 2(a), top. In other words, the efficiency of the periodic dielectric mirror changes when the refractive index of the core material varies. The change in the core refractive index can be inferred from the detected increase in the fiber's transmission loss. Such sensors can also be used in standard, nonresonant mode for detection of changes in the imaginary part of the refractive index: see Figure 2(a), bottom. Even in nonresonant mode, the sensitivity of the hollow-core PBG-fiber-based sensor is, generally, superior to that of traditional fiber-based evanescent sensors because of the greatly improved modal overlap with the analyte.

The second type of sensor is operated in the vicinity of a phase-matching wavelength between an easy-to-excite core-guided mode and some other mode that exhibits high sensitivity of its propagation properties to changes in the real part of the analyte's refractive index: see Figure 2(b). For example, by metallizing the fiber surface with a thin (~40nm) metal layer at a specific resonant wavelength, one can induce strong optical loss of a core-guided mode because of coupling to an absorbing plasmon mode propagating at the metal/analyte interface. As plasmon modes are largely delocalized in the analyte region, the wavelength of phase matching between the two modes will be very sensitive to the value of the real part of the analyte's refractive index. Sensitivity of such sensors has been demonstrated theoretically and experimentally at ~10−6 RIU for a typical sensor length of 1–10cm.

In summary, we have developed two novel PBG-fiber resonant sensors of the analyte's refractive index, which show potential for single-step fabrication. Such sensors use PBG waveguides (or fibers) and their operational principle relies on resonant changes in the optical properties of guided modes with respect to changes in the analyte's refractive index. The sensors can be highly compact (several centimeters in length) and feature detection limits as small as ~10−6 RIU. Moreover, PBG-based sensors allow integration of microfluidics directly into the fiber structure, while still featuring relatively large channels (10–50μm) for fast analyte  delivery. It has already been demonstrated that complex PCFs incorporating very different materials such as low-melting-point metal alloys, biofunctional polymers, and optical plastics can be made by drawing out the component parts together. This technique promises a way to produce a complete, highly sensitive PBG-based biosensor system in one drawing step, and we are working to demonstrate complete bio- and chemical sensors made this way.

Maksim Skorobogatiy received his PhD in physics from the Massachusetts Institute of Technology (MIT) in 2001. Between 2001 and 2003, he headed a theory group at OmniGuide Inc., an MIT startup. He has been at the Polytechnic School of Montreal as a professor and Canada Research Chair in Micro- and Nano-Photonics since 2003.