Demonstrations of photonic quantum-information science, including an integrated circuit that can factorize the number 15, promise applications on a feasible scale.
12 July 2010
Alberto Politi and Jeremy L. O'Brien

Harnessing quantum-mechanical effects could dramatically improve performance for certain information-science applications. Anticipated technologies include quantum-key distribution, which offers perfectly secure communication; quantum metrology, which allows more precise measurements than could ever be achieved with classical mechanics; and quantum lithography, which could enable fabrication of devices with features much smaller than the wavelength of light. Perhaps the most profound future technology is a quantum computer that promises exponentially faster operation for particular tasks.1

Single particles of light are an excellent choice for quantum technologies because they are relatively noise free, information can be moved around quickly, and manipulating single photons is easy. For these reasons, photons are the best candidates for quantum settings for communication, metrology, and lithography. Moreover, photons are recognized as one of the most promising approaches for quantum-information processing.2 To encode the relevant unit element, a two-level quantum system (a quantum bit or qubit) is needed. For light, different degrees of freedom of the photon can be used, for example polarization. In this case, one can use horizontal and vertical photons to represent ‘0’ and ‘1,’ respectively The big difference between bits and qubits is that a qubit can assume the values ‘0’ and ‘1,’ as well as superpositions of these states.

Single photons allow very easy implementation of one-qubit logic gates. In polarization encoding, one-qubit operations are conventional polarization rotations available with birefringent waveplates. For quantum information, however, single-qubit operations alone are not sufficient: two-qubit gates are required. It is a great advantage that photons see low noise during propagation, but at the same time it makes two photons interact with a negligible probability. Two-photon interaction is at the heart of the controlled-NOT (CNOT) gate (which performs the NOT logic operation), one of the building blocks of a future quantum computer.

It was shown in 2001 that the two-photon interaction required for quantum gates can be achieved using nonlinearities induced by single-photon detection.3 In this scheme, additional photons are needed to act like a catalyst in the gate. For the CNOT gate, the two qubits (together with auxiliary photons) enter an optical network. At its output, the qubits emerge, having had the CNOT operation applied to their state, conditional on detection of single photons at particular outputs. A number of optical networks have already been realized for quantum logic gates and circuits.4 However, these demonstrations relied on large-scale (bulk) optical elements bolted to large optical tables, thereby making them inherently nonscalable and confining them to the research laboratory.

Optic integrated circuits offer great potential for realizing previously unfeasible large-scale quantum circuits. The monolithic nature of these devices means both miniaturization of the circuits and also that the correct phase can be stably realized in what would otherwise be an unstable interferometer. We recently demonstrated integrated circuits based on silica-on-silicon waveguides to implement quantum-information components. This flexible architecture can be used to implement key quantum-computation elements, including CNOT gates based on integrated directional couplers5 and reconfigurable single-qubit operations using phase controllers based on the thermo-optical effect of silica.6

The requirements to realize quantum computation are very stringent. For this reason, it is important to prove that the performances obtainable from integrated photonics quantum gates satisfy bounds required for error correction. We observed two-photon quantum interference (an effect fundamental for linear-optics quantum computing) in integrated directional couplers that shows near-unity visibility and CNOT-gate operation with a similarity of S=0.993±0.002 with that expected for the circuit with the measured reflectivities.7 This result shows one of the best performances for a CNOT gate in any architecture, not just optics. Near-unity quantum interference is a crucial result, since it proves that there are no intrinsic performance limitations in integrated quantum photonics and tolerances of less than 1% (as required for error correction) can be achieved.

We subsequently realized a simple quantum algorithm in an integrated waveguide chip. This illustrates the importance of using integrated optics for quantum-optical experiments. The implemented circuit is a compiled version of Shor's quantum-factoring algorithm. Originally conceived in the context of simulating complex quantum systems, the algorithm showed the capability of factoring the product of two large prime numbers exponentially faster than any known conventional method. We implemented a compiled scheme of Shor's factoring algorithm8 (see Figure 1) designed specifically to factorize 15, finding experimental results that agree with the expected values with a similarity of 99±1%. 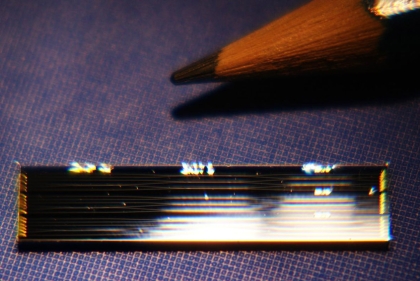 The current limitations for quantum-information science with photons are mainly caused by the creation and detection of photons. We, and others, are trying to develop high-efficiency single-photon detectors and sources. In particular, their integration with the circuits we already demonstrated will open up the way for miniaturizing, scaling, and improving the performance of photonic quantum circuits for both future quantum technologies and the next generation of fundamental quantum-optics studies.

The authors thank J. C. F. Matthews and J. G. Rarity for helpful discussions. This work was supported in the UK by the Engineering and Physical Sciences Research Council, the European Research Council, the Leverhulme Trust, the Quantum Information Processing Interdisciplinary Research Collaboration, the Intelligence Advanced Research Projects Activity, and the Centre for NanoScience and Quantum Information at the University of Bristol. Jeremy L. O'Brien acknowledges a Royal Society Wolfson Merit Award.

Alberto Politi is a research fellow in physics. He received a BEng degree in electrical engineering in 2003 and an MPhys degree in 2005 from the University of Pavia (Italy). He completed a PhD at the Centre for Quantum Photonics at the University of Bristol.

Jeremy O'Brien is professor of physics and electrical engineering and leads the CQP. He received his PhD in physics from the University of New South Wales (Australia) in 2002 for experimental work on correlated and confined electrons in organic conductors, superconductors, and semiconductor nanostructures, as well as progress towards fabrication of phosphorus in a silicon quantum computer. As a research fellow at the University of Queensland (Australia: 2001–2006), he worked on quantum optics and quantum-information science with single photons. CQP's efforts focus on the fundamental and applied quantum mechanics at the heart of quantum-information science and technology, ranging from prototypes for scalable quantum computing to generalized quantum measurements, control, and metrology.