The nascent field of quantum-information science has seen rapid progress in developing efficient sources of correlated photon pairs, which are useful for generation of entanglement, heralded single photons, and linear optical quantum computing. In particular, quantum computers (if they can be made) may be capable of solving certain types of classically intractable problems (such as factoring large integers) much faster than classical devices. Any future optical quantum computer will likely require components that are small and can be integrated easily. Both requirements may be satisfied if all components are integrated on a single chip, as done with current electronic integrated circuits. In addition, it is natural to adopt a ‘photon conduit’ in the form of a single-mode waveguide for transporting photons from one component to another, analogous to the electronic wires in current computers. Chipscale (i.e., easy to integrate) photon-pair sources that emit into a single spatial mode (and are, therefore, easy to collect) offer significant advantages for workable photonic-computation systems.

Notably efficient methods for producing correlated photon pairs include spontaneous parametric downconversion (SPDC) in bulk crystals and spontaneous four-wave mixing in optical fibers. The former method typically produces correlated photons in many spatial modes and, therefore, suffers from low collection efficiency into single-mode optical fibers. The latter technique naturally generates correlated photons in single spatial mode. However, it does not lend itself easily to chipscale integration, since the fibers used are typically ~ 1m (photonic crystal fibers) or several hundred meters (dispersion-shifted fibers) in length. SPDC in chipscale optical waveguides1 offers a promising alternative, because it can generate correlated photons predominantly in a single spatial mode with a very small footprint. However, important performance parameters such as the temperature dependence of photon-pair production and the coincidence (joint) spectrum of a waveguide source have hardly been published. Therefore, we have undertaken a systematic experimental study of such a waveguide-based photon-pair source.2

Our experiment (see Figure 1) starts with a flux-grown periodically poled potassium titanyl phosphate (PPKTP) waveguide that is temperature controlled, with a length of 1.5cm and a 4 × 4μm2 cross section. The waveguide supports type II SPDC (Hp → Vs + Hi, where H and V represent horizontal and vertical polarization, respectively, and the subscripts p, s, and i refer, in turn, to the pump, signal, and idler). Aided by periodical poling it also supports type 0 SPDC (Vp → Vs + Vi). Both types of SPDC conserve energy and momentum, and it is easy to switch from one to the other simply by turning the pump polarization from H to V. Pump pulses (80MHz repetition rate with a central wavelength of 532nm) are focused into the waveguide using an aspheric lens. Photon pairs created at the signal and idler wavelengths (≈ 900 and 1300nm, respectively) exit the waveguide and are separated from each other and the pump using dichroic mirrors. Each member of the pair is then coupled into a computer-controlled narrow-band tunable filter en route to a single-photon detector, where single and coincidence counts are registered. 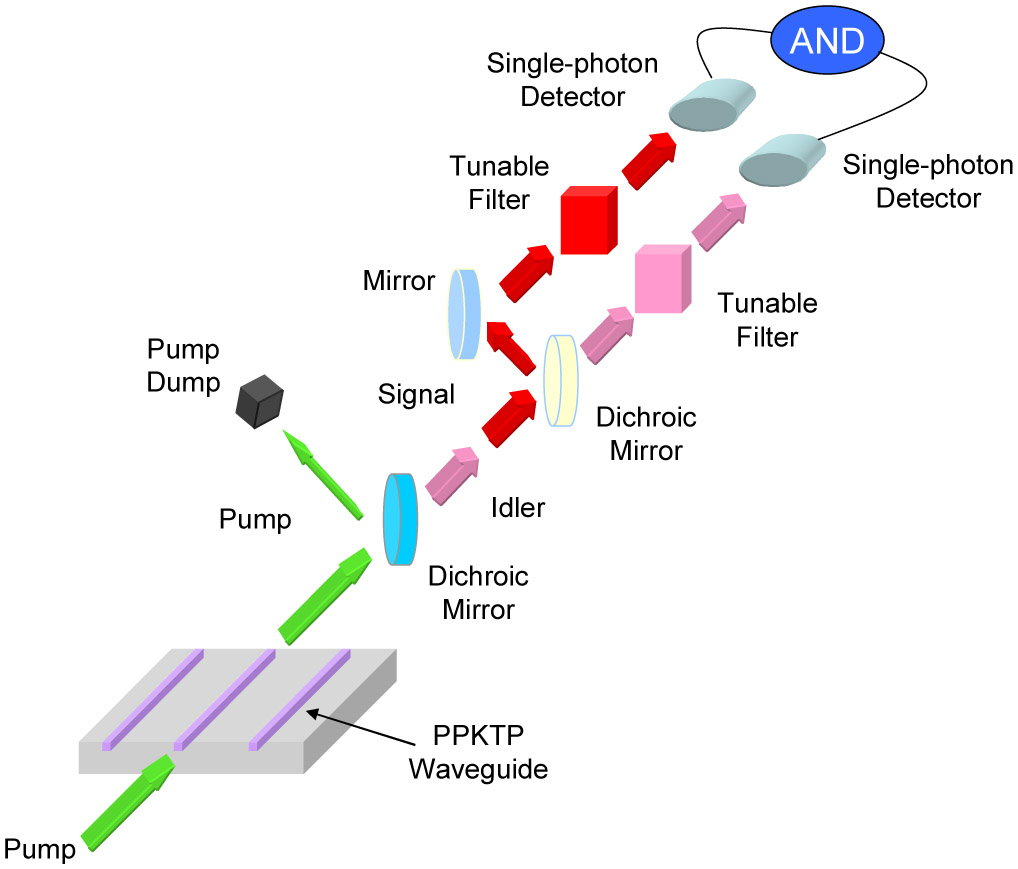 Figure 2 shows numerically simulated intensity distributions for pump, signal, and idler fundamental modes. We modeled the eigenmodes for both type 0 and II SPDC using a finite-element-based approach.3 However, we only show the results for the peak wavelengths (λp = 532, λs = 900, and λi = 1300nm for pump, signal, and idler, respectively). In our simulation, the rubidium-diffused potassium titanyl phosphate (KTP) waveguide (i.e., RTP) is the bottom center block. It is surrounded by KTP on either side and air on top. It has a width of 4μm and a refractive-index (n) diffusion profile given by n(z) = nKTP + Δn erfc(z/z0) with Δn = 0:02 and z0 = 4μm (erfc: Error function). Our simulation results clearly show that the waveguide is birefringent and that quasi-transverse-magnetic (V) modes extend more into the positive-z direction (KTP substrate) than their quasi-transverse-electric (H) counterparts. 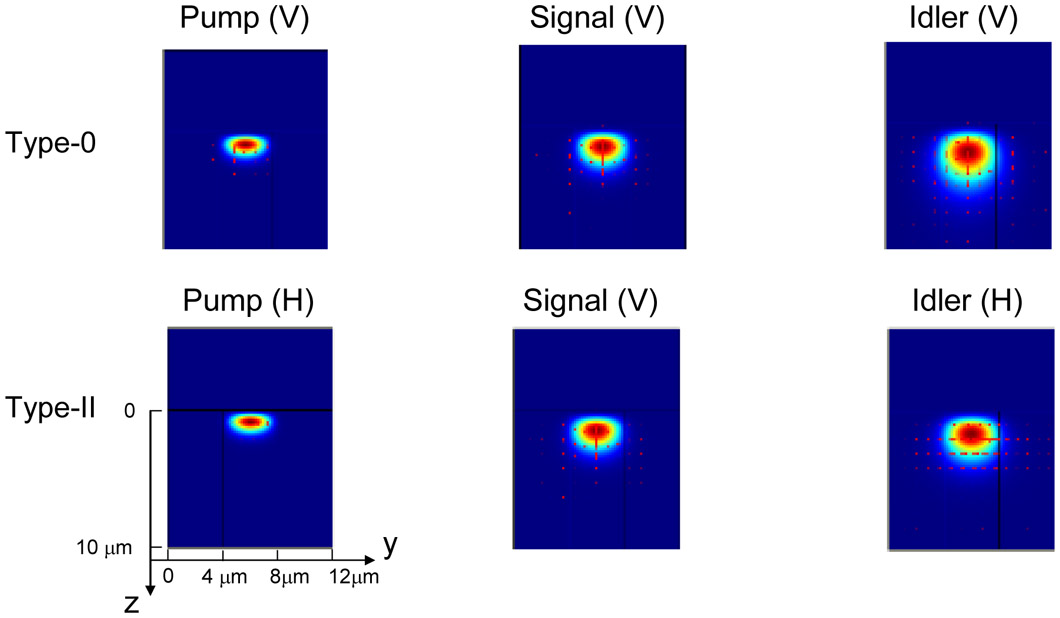 Figures 3(a) and 3(b) show the temperature dependence of idler single-count spectra for type 0 and II SPDC, respectively. The two types of SPDC have nearly the same optimal temperature (34.6°C), although the type 0 emission is wider and dimmer. The same pattern applies to the signal's single-count spectrum. We also show a purity measure of the photon-pair source—the coincidence to accidental ratio (CAR)—as a function of photon production per pulse (see Figure 4) for the peak-wavelength pair for both type 0 and II SPDC at their optimal temperatures. A clear tradeoff between the photon flux and CAR is achieved, in the sense that decreasing photon flux results in increasing CAR. At the same photon flux, the CAR is similar for both types of SPDC, indicating that they have nearly the same purity. 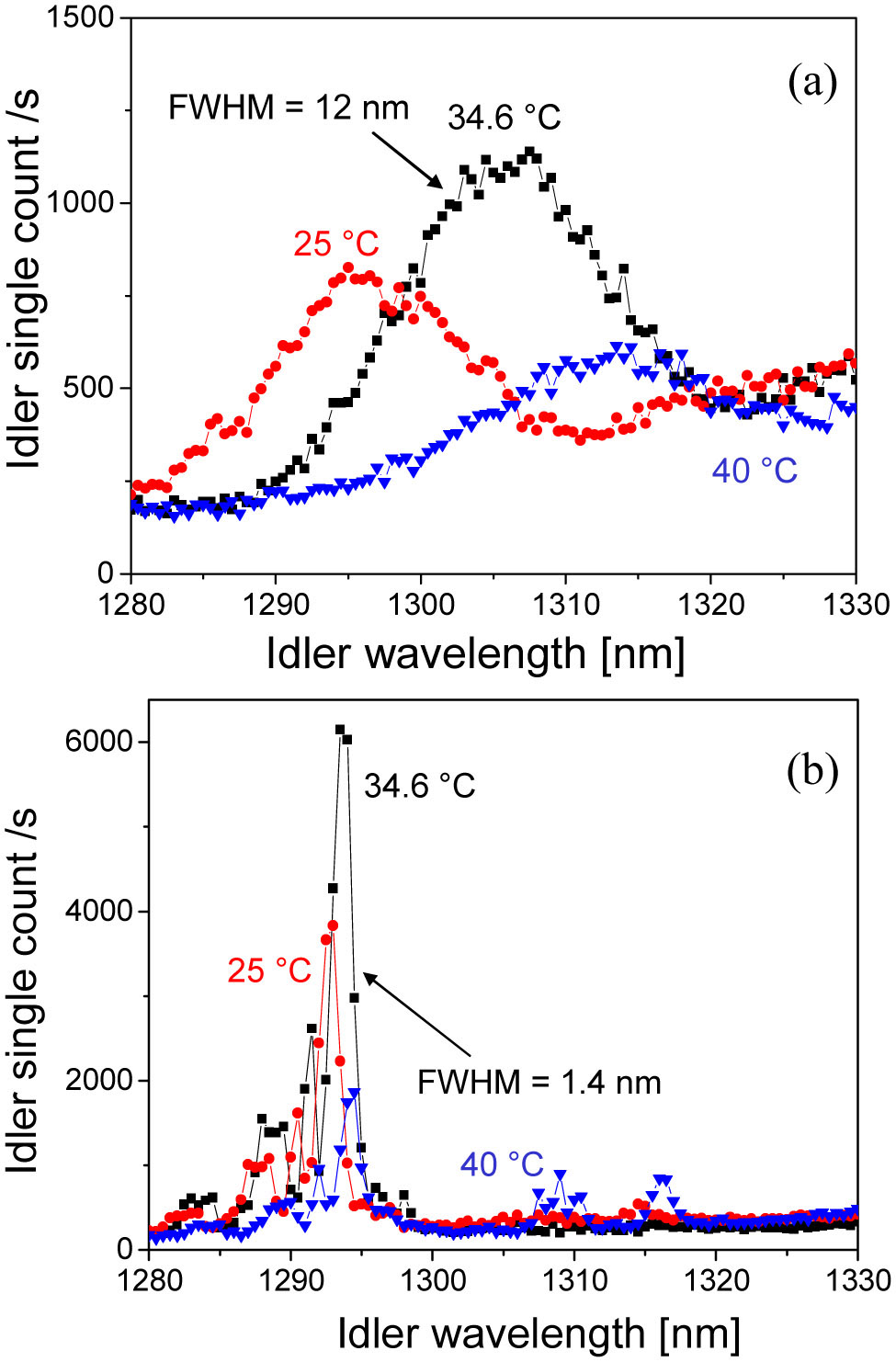 Figure 3. Single-count spectrum versus temperature for (a) type 0 and (b) type II SPDC. FWHM: Full width at half maximum. 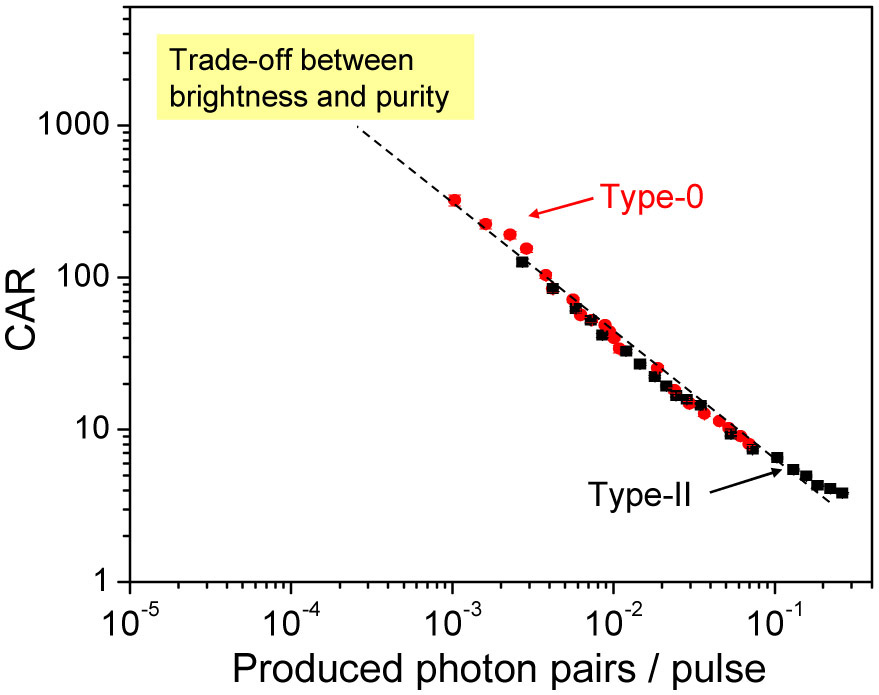 Figure 4. Coincidence-to-accidental ratio (CAR) as a function of photon-production rate for type 0 and II SPDC.

Figure 5(a) shows the coincidence spectrum for type II SPDC at its optimal temperature, obtained by registering coincidence counts while scanning the wavelengths of signal and idler photons. We experimentally determined the overall collection efficiencies for both signal (ηs= 0:035) and idler (ηi= 0:040) channels. This allows estimation of the photon-pair component relative to the uncorrelated single-photon fluorescence.1 Figure 5(b) shows both photon-pair and single-photon emission spectra for type II SPDC, while Figures 5(c) and 5(d) present the corresponding spectra for type 0 SPDC. Both types of SPDC demonstrate high spectral brightness (~108/s/mW/THz). The type II coincidence spectrum has a much lower Schmidt number4 than its type 0 counterpart, i.e., it contains less spectral entanglement and approaches a factorable state more closely. We have also identified some small nonuniformity in the poling period during the waveguide length, which broadens the spectral width of type 0 photons but does not impact type II photons.5 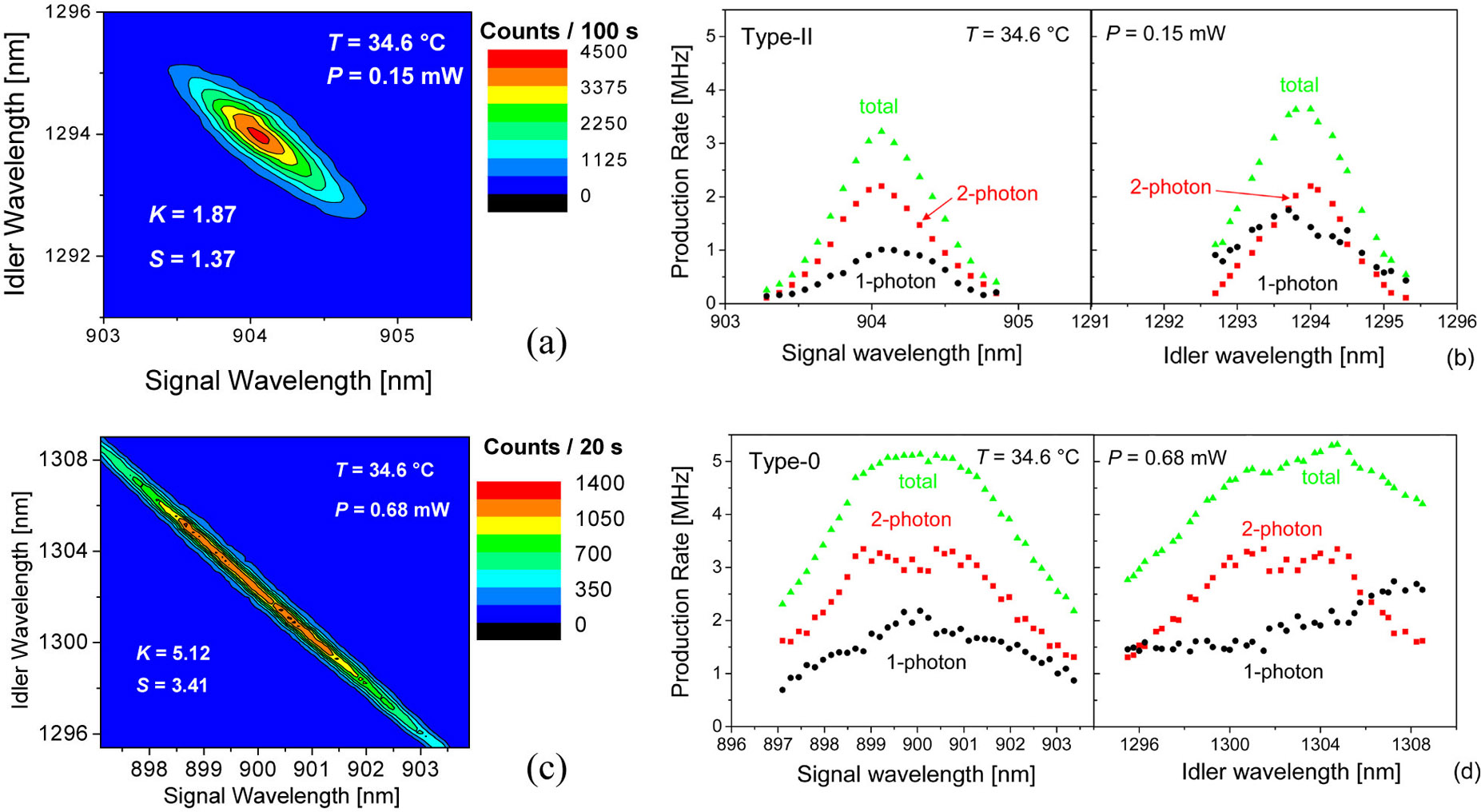 Figure 5. (a) Coincidence spectrum and (b) two- and single-photon components for type II SPDC at its optimal temperature (T). (c) and (d): As (a) and (b), but for type 0 SPDC. K: Schmidt number. S: Entanglement entropy. P: Power.

While we have made significant strides towards a bright, chipscale photon-pair source, further improvements can be made by optimizing collection efficiencies. We can obtain a higher-purity source if we manage to suppress single-photon noise by optimizing material processing. (A hydrothermally grown waveguide may have fewer defects and therefore produce fewer noise photons.) This represents the direction of our future research. It is also possible to design a waveguide that downconverts into factorable states.6 We believe that such a compact source will play a key role in future integrated photonic circuits.

This work has been supported in part by the Intelligence Advanced Research Projects Activity's Polarization-Entangled Photon Source program.

Jun Chen is a research associate at the Joint Quantum Institute of the University of Maryland (College Park). He is also a guest researcher at NIST. His current research interests include quantum-information processing with standard and photonic-crystal fibers and nonlinear optics in micro- and nanoscale waveguides and resonators.

Alan Migdall is a member of the Optical Technology Division, where he is involved in projects that use two-photon light sources and study their entanglement for absolute metrology and quantum-information applications. He works on advancing single-photon technology for use in this field. He is also a fellow of the University of Maryland's Joint Quantum Institute. He has been engaged in laser cooling of atoms, which resulted in the first trapping of a neutral atom. He has also organized a number of workshops, symposiums, and special journal issues on this topic as a means of encouraging single-photon technology.