Time-correlated single-photon counting (TCSPC) is a repetitively pulsed statistical sampling technique that records the time of arrival of photons reflected from a target and logs this against the time of emission of a laser pulse. Each photon's arrival time is an independent measure of range, and accuracy can be improved by increasing the number of samples (N). Assuming that systematic errors can be avoided, the range accuracy increases as

. Figure 1(a) shows a typical electronic architecture that uses a time-to-amplitude converter (TAC) and multichannel analyzer (MCA) to acquire photon arrival times (and store them in addressable memory).

Compared to analog detection, TCSPC has major advantages. Arrival times can be recorded to an accuracy of a few picoseconds. In addition, the detector responds to single photons, providing shot-noise-limited sensitivity. Very low optical powers can, therefore, be used in applications such as lidar (light detection and ranging) or range finding. The technique's main disadvantage is that a repetitive pulsed laser must be used, so an extended data-acquisition time is required. This is undesirable when engaging moving targets where the range might change by an amount that exceeds the required accuracy. This tradeoff between accuracy and data-acquisition time is the fundamental issue with practical use of TCSPC. (Defense applications demand high data-acquisition rates.) 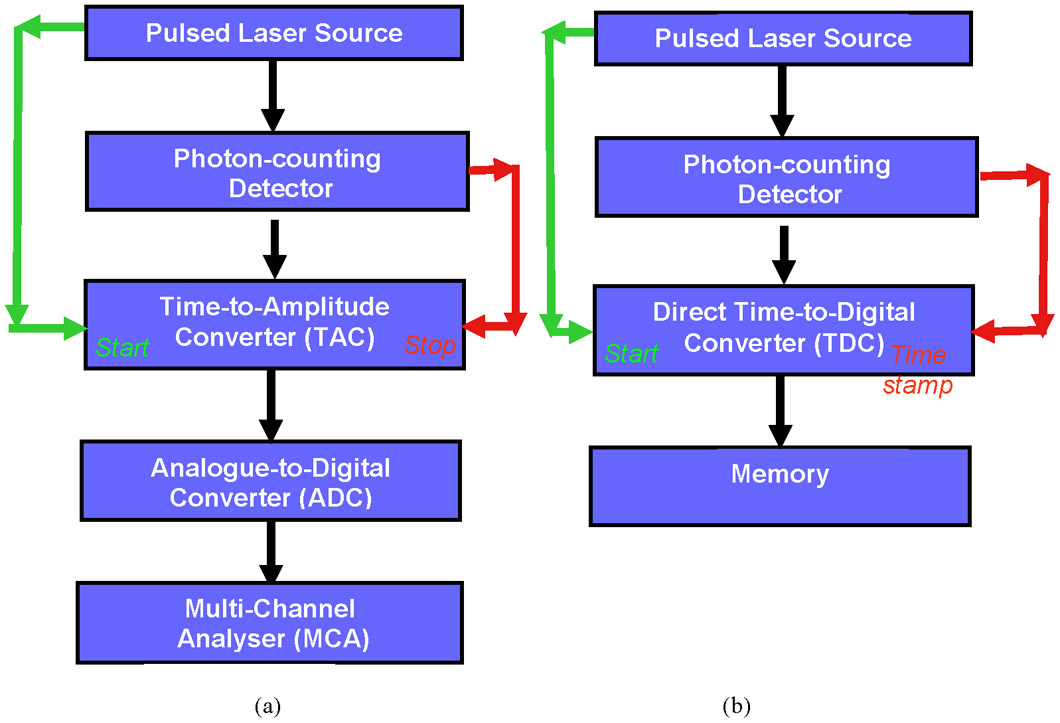 Figure 1. Functional description of (a) time-to-amplitude and (b) alternative time-to-digital converter-based systems.

Advances in TCSPC over the last ten years have seen this technology growing in importance for defense applications, especially for ultralow-light-level time-of-flight laser range finding. Systems based on single-wavelength, high-repetition-rate laser diodes using TAC and fast digitization have been the dominant electronic architecture for much of the commercially available equipment. SELEX Galileo and Heriot-Watt University (Edinburgh, UK) have jointly developed several targeted lidar and laser range-finding systems based on this approach for over 15 years. These early devices quickly established TCSPC as a practical method for range finding using ultralow-power laser beams. A typical system could range on a noncooperative target to over 1km in daylight at power levels well below 100μW. Our collaboration also produced a six-wavelength transceiver that reached 5 and 17km with noncooperative and corner-cube targets, respectively.1 Data-acquisition times for these systems were typically a few seconds. This achievement clearly indicated the need for improved, fast data-acquisition hardware to reduce acquisition times to those commensurate with conventional laser range finders. Recent improvements in detector deadtime, resolution, and optical-transceiver design have reduced acquisition times to tens of milliseconds.

We are currently developing TCSPC as a solution to ultralow-light-level active imaging. Although photon-counting arrays are being developed with individually addressed pixels, the acquisition rates and entry-level cost of these devices could prohibit widespread use for some time.2 We are interested in using single-pixel scanned systems to produce 3D depth-profiled images based on photon counting in low-cost systems. There are strong links to compressive sensing and sampling approaches where high-resolution images may be recovered from incomplete data sets, as in single-pixel cameras. 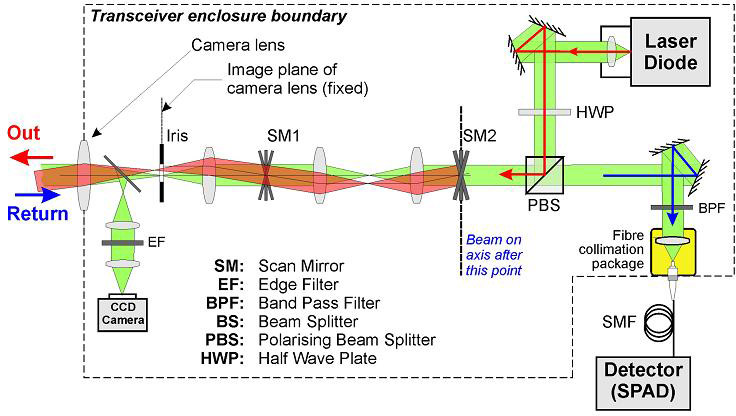 Heriot-Watt University has developed a single-pixel, galvo-mirror-based scanning system,3,4 where image scanning over a range of 330m outdoors was demonstrated in daylight conditions (see Figure 2). This device recorded images with variable pixel angular resolution and fields of view, and operated at a wavelength of 850nm. A typical result for a scanned vehicle is shown in Figure 3. The scan's field of view is 12mrad, with each frame containing 200×64 pixels. The constructed image had an effective angular pixel resolution of ~80μrad. (Further details on similar scans are provided by McCarthy et al.4) These investigations have demonstrated the potential for single-pixel point detection for passive 2D and active 3D imaging.

Figure 3. (a) Close-up of vehicle target used for depth imaging.3(b) Scanned depth image of a vehicle taken from a range of 330m.

Our most recent work aims at eliminating range aliasing using a random-repetition-rate waveform.5 Provided the random pulse pattern does not repeat itself over the roundtrip to the target, we can recover its absolute range by calculating the cross correlation of the transmitted and return waveforms for a high repetition rate. This destroys the temporal correlation between transmitted and received waveforms. We have demonstrated that we can employ a waveform with an average repetition rate of 2MHz over ranges of 2km, although our algorithm has simulated successful performance up to 1GHz.

We will continue to develop random-waveform lidar with photon counting and apply it to 3D scanning lidar using compressive sensing. It is clear that these principles can also be used in analog lidar, where the process is similar to ‘chaotic’ lidar. Combined with advances in microelectromechanical-systems beam-steering technology and fast digital electronics, this means that the prospect of fast, ultralow-light-level, low-cost 3D active imaging is becoming a reality.

Robert Lamb is chief technologist for electro-optics. He is also an honorary professor of physics at Heriot-Watt University. His research interests focus on nonlinear optics and lasers for active imaging, electro-optical and directional infrared countermeasures, and ultralow-light sensing using photon counting for range finding.

Gerald Buller is a professor of physics. His interests include time-of-flight photon counting (also at longer wavelengths), quantum-key distribution, and quantum imaging. He is also a director of Helia Photonics Ltd. (Scotland).