Optical imaging has become an important tool in neuroscience research.1 Using methods such as optical intrinsic signal imaging (OISI), laser-Doppler imaging, and laser-speckle imaging, investigators can record changes in blood flow and blood volume in the brain, as well as alterations in blood oxygen concentration, in response to different types of stimulation. By measuring these changes, they can gain deeper insight into the functioning of the brain, which in turn can contribute to better understanding of a range of behaviors and conditions.

However, these techniques typically detect diffuse light, or light that has scattered multiple times before being detected. Imaging with diffuse light has two major disadvantages. First, the spatial resolution is poor, which inhibits depth resolution. Second, it is difficult to perform absolute, calibrated measurements of quantities such as blood flow and volume due to unknown optical properties of tissues. One approach to addressing these limitations is to perform high-resolution optical microscopy. Two-photon microscopy, for example, provides high-resolution imaging of red-blood-cell velocity and vessel diameter,2 but it is limited in terms of imaging speed, field of view, and depth penetration.

In a recent study, we applied spectral/Fourier-domain optical coherence tomography (OCT) to directly perform depth-resolved measurements of hemodynamic changes in the brain during functional activation, with resolution as high as a few microns. OCT is the optical analog of ultrasound. It works by detecting backscattered light from different depths in tissue using an interferometric technique, thus enabling micron-resolution and cross-sectional imaging capabilities. Depth resolution is determined by the coherence length of the light used. With respect to neuroimaging, OCT can reject out-of-focus and multiply scattered light, which makes it possible to measure well-defined volumes, even in highly scattering tissue, and to achieve high depth penetration. Furthermore, because depth resolution depends on coherence length, low-numerical-aperture objectives can be used, enabling large imaging fields of view. Consequently, OCT occupies a niche between two-photon microscopy and diffuse optical-imaging methods. It is particularly suited to situations requiring a combination of high spatiotemporal resolution and depth penetration over a large field of view. Specifically, OCT can image layers of the cortex that are not accessible with two-photon microscopy.

We built a spectral/Fourier-domain OCT3–5 microscope for in vivo imaging of the rat cerebral cortex.6 Spectral/Fourier-domain OCT is a recent development in OCT detection that has dramatically enhanced speed and sensitivity compared with prior methods. In addition, it enables depth-resolved measurements of the phase of the scattered light as a function of time, which can be related to the velocities of moving red blood cells. In our study, imaging was performed at 22,000 axial scans per second through a cranial window over the rat somatosensory cortex during forepaw activation.

We exploited the high spatial resolution of OCT to examine how flow changes occur, and assigned contributions to increases in vessel diameter as well as in red-blood-cell velocity. Figure 1(A) shows a Doppler OCT velocity image of an arteriole at baseline (above) and during peak activation (below). Figure 1(B) shows relative flow, velocity, and diameter time courses. In addition, we obtained a measure, based on scattering, which may track changes in total hemoglobin concentration occurring simultaneously with the flow changes. Figure 2(A) shows an OCT image with a region of interest around a capillary bed, and a draining vein (V) near the region of interest. Figure 2(B) shows time courses of flow in the draining vein (measured by Doppler OCT), scattering changes in the capillary bed (measured by OCT from the change in extinction coefficient), and changes in total hemoglobin (measured by optical intrinsic signal imaging).

Figure 1. (A) Doppler optical coherence tomography (OCT) velocity image of an arteriole at baseline (above) and during peak activation (below). (B) Relative flow, velocity, and diameter time courses.

Finally, working in collaboration with Thorlabs Inc., we developed a method of rapidly imaging perfusion in the cortical microvasculature at 47,000 axial scans per second.7  The contrast mechanism of this method is based on scattering of moving red blood cells.8 Figure 3(A) shows an example of an OCT perfusion angiogram of the rat somatosensory cortex, acquired in approximately 1 minute. Figure 3(B) shows a zoom of the angiogram, clearly showing microvasculature. 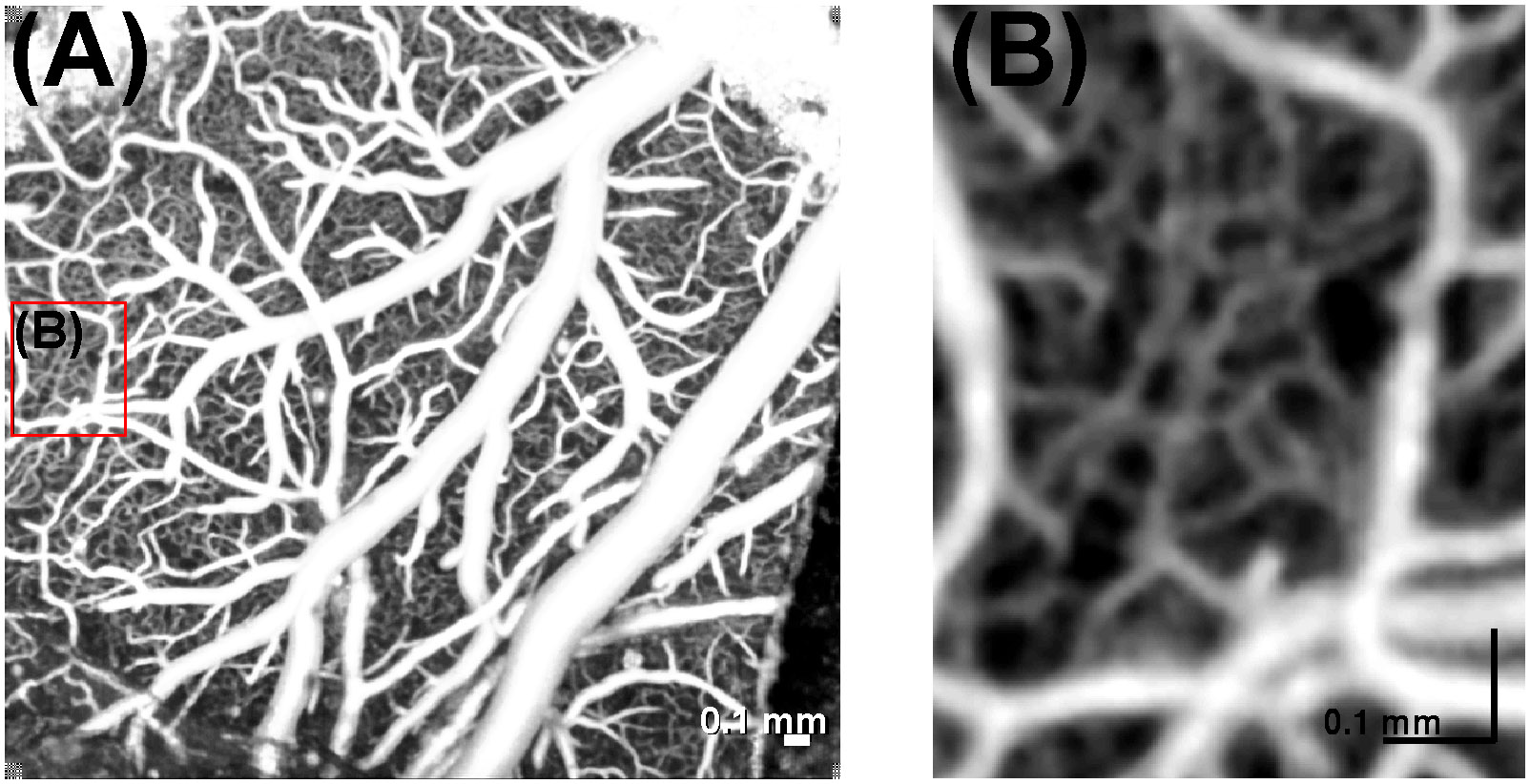 Figure 3. (A) OCT angiogram obtained through a cranial window over the rat somatosensory cortex, and (B) zoom showing microvasculature.

Using OCT, we observed—to our knowledge, for the first time—depth-resolved changes in blood flow owing to brain activation. We also probed the mechanisms underlying these changes. Moreover, we developed methods of rapidly visualizing capillary perfusion in the cortex. We are continuing to develop OCT-related techniques to study brain physiology. Elsewhere,9 we report methods that we developed for quantifying absolute blood flow. These advances will allow further insights into the functioning of the brain at cortical depths and resolutions that are impossible with other microscopic techniques.