Better assessment of ocular blood circulation may provide important diagnostic and treatment information for eye pathologies such as age-related macular degeneration, diabetic retinopathy, and glaucoma. Currently, the preferred methods to visualize ocular blood perfusion in the clinic are fluorescein angiography (FA) and indocyanine green angiography (ICGA). Both provide detailed maps of the retina and choroid that are useful in decision making. However, injecting dyes with possible side effects is undesirable. Moreover, those methods cannot provide depth-resolved visualization of vasculatures. Therefore, a noninvasive technique that can show retinal and choroidal blood perfusion in depth would be a significant advance.

We have developed a novel imaging technique, optical microangiography (OMAG), that can produce 3D images of dynamic blood perfusion within microcirculatory tissue beds.1–6 A variation of optical coherence tomography, OMAG produces imaging contrasts through endogenous light scattering from moving particles (such as flowing blood cells within open vessels), so no exogenous contrast agents are necessary. The basic physics behind this type of imaging is the Doppler effect. The light backscattered from moving particles carries a beating frequency that can distinguish signals made by moving elements from those that are static. OMAG mathematically maps the backscattered optical signals from the moving particles into one image (the blood flow), and simultaneously maps the backscattered optical signals from the static particles into a second image (the microstructure). These distinct features provide researchers with a unique ability to perform comprehensive measurements of the morphological and functional parameters of blood perfusion within the retina and choroid. 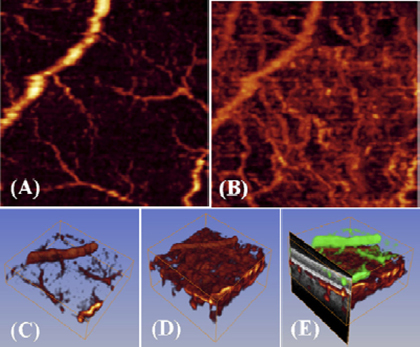 However, a practical issue must be considered when using OMAG to probe the human eye: involuntary movement of the patient. We developed software algorithms to compensate for bulk and local tissue motion.4 For local movement, we used the cross correlation of adjacent OMAG flow images to estimate both the axial and lateral displacements between frames. For bulk-motion artifacts, optical phase information was used. We adopted histogram-based phase estimation to better calculate phases representing motion. These compensation methods worked well to remove or minimize patient-movement artifacts in OMAG flow images. 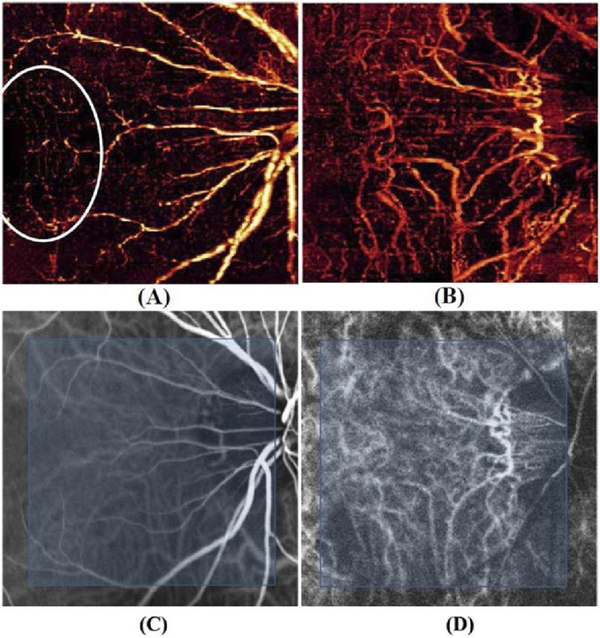 Figure 2. Wide field-of-view blood-perfusion maps can be obtained from OMAG for (A) retina and (B) choroid, compared with (C) fluorescein angiography and (D) indocyanine green angiography. (Image size is 7.4×7.4mm2.)

Currently, the OMAG imaging system has a limited field of view. One typical 3D image covers a volume of 2×2×2mm3 in the posterior segment of the eye. Figure 1 shows one example of results from a healthy volunteer. Because of depth-resolved capability, the blood perfusion within the retina and choroid can be separated, as seen in Figures 1(A) and 1(B), respectively, representing projection maps from the 3D dataset. Figures 1(C) and 1(D) are the 3D-rendered volumetric blood-vessel networks in the retina and choroid, respectively. Using 3D software, the retinal and choroidal blood vessels as well as the cross-sectional structure image can be combined to better present their relative positions, as shown in Figure 1(E).

With this technique, the wide-field view of ocular-perfusion maps of the retina and choroid provides a spectrum of information for ophthalmic diagnosis. Multiple 3D datasets at different locations can be captured and combined to give a wide-field view of depth-resolved ocular blood flow. The images in Figure 2 were created from 16 3D datasets captured using a predesigned pattern. Figures 2(A) and 2(B) are blood-flow maps from the retina and choroid using OMAG. These results compare favorably with clinical FA—see Figure 2(C)—and ICGA—see Figure 2(D)—from the same volunteer. Furthermore, OMAG sees more micro-blood vessels in the foveal region than FA (marked by the white ellipse).

In conclusion, OMAG technology is a useful, noninvasive imaging technique that can provide blood-perfusion maps both within the retina and choroid. Our ongoing studies are focused on developing an ultrahigh-speed OMAG system based on CMOS detectors and further increasing the system sensitivity to the retina's capillary blood flow. The high speed afforded by the CMOS camera can further minimize motion artifacts. Looking forward, we plan to move this new imaging technique into the clinic to study the involvement of blood circulation and angiogenesis in age-related macular degeneration and diabetic retinopathy.

Ruikang Wang, professor of biomedical engineering, anesthesiology and peri-operative medicine, is also director of the Biophotonics and Imaging Laboratory.

Lin An is a PhD student.

David Wilson, professor and Thiele-Petti chair in the Department of Ophthalmology, is also director of the Casey Eye Institute.