Superconductivity takes the stage in the field of metamaterials

A new class of remarkable materials are much smaller and more tunable than their ordinary metamaterial counterparts, which enhances their practical potential.
16 February 2010
Cihan Kurter and Steven M. Anlage

Metamaterials (so called because of their engineered electromagnetic properties) hold great promise for new applications in the megahertz to terahertz bands, as well as optical frequencies. Examples including super-resolution imaging, cloaking, hyperlensing, and optical transformation. Conventional metamaterials are limited in their ability to demonstrate these phenomena because of their ohmic and dielectric losses and dissipation. However, a new class of metamaterials sidestep these problems and have the added benefit of being much smaller, more tunable, and more nonlinear than their ordinary counterparts.

Among the metamaterial designs that feature both negative permittivity and permeability (and thus a negative index of refraction), split-ring resonators (SRRs) placed in a wire array medium have drawn a great deal of attention.1–3 These devices generally employ normal metal films on a dielectric substrate, and operate in the gigahertz frequency spectrum4 and higher: see Figure 1(a).

Miniaturized normal metal SRRs have worked fairly well in the gigahertz range, but as the SRRs are scaled down in size and used at higher frequencies, ohmic losses begin to adversely affect the quality factor (Q) and suppress important characteristics such as evanescent wave amplification. The latter is particularly important for making a perfect lens, and for cloaking and optical transformation devices. Our group has pioneered the use of superconducting thin films instead of printed circuit board (PCB) materials and other normal metals to construct SRRs.5,6 The superconducting materials show zero DC resistance and minimal ohmic losses at finite frequency when they are cooled below their superconducting transition temperature (Tc).

We fabricate our superconducting SRRs from 200nm-thick niobium (Nb) thin films magnetron-sputtered onto quartz single crystals. Microwave transmission measurements are performed by placing the Nb SRRs into a wire-loaded Nb X-band waveguide to create a negative permeability medium and to observe high-Q resonant features below the Tc of the Nb film. These SRRs give sharp peaks (dips) at about 10.77GHz when their resonance frequency is below (above) the cutoff frequency of the waveguide. Since the superconducting state is extremely sensitive to both temperature and magnetic field, we have managed to carry out precise tuning of the permeability and refractive index simply by changing the ambient temperature, the radio frequency (RF) input power, or applying an external DC magnetic field.7

When it comes to constructing radio frequency (RF) metamaterials, it is hard to follow the same SRR-based design without using very large diameter split rings, which is not practical either for experiments or applications. Inspired by the inductor-capacitor analogy in SRRs, we recently developed an RF metamaterial fashioned with ultracompact Nb 2D thin-film spirals: see Figure 1(b). The alternative method using normal metals requires large 2D structures8 or bulky 3D structures. For example, Swiss roll structures9 resonating at 25MHz are made by winding a copper-kapton sheet onto a dielectric mandrel. Our 2D superconducting design not only enhances the resonant features by reducing the losses but also simplifies the device fabrication without resorting to the complexity of 3D structures, and minimizes the variation between individual elements.

One advantage of using superconductors in metamaterial designs is the kinetic inductance (Lk) contribution to the total inductance. Since Lk is sensitive to the ambient temperature, the resonant properties of the superconducting element will change dramatically as temperature approaches Tc, which is crucial for tuning the performance of the designed metamaterial in practical applications. Figure 2 illustrates the temperature tunability of a 2D resonant RF spiral in the range below 76MHz. 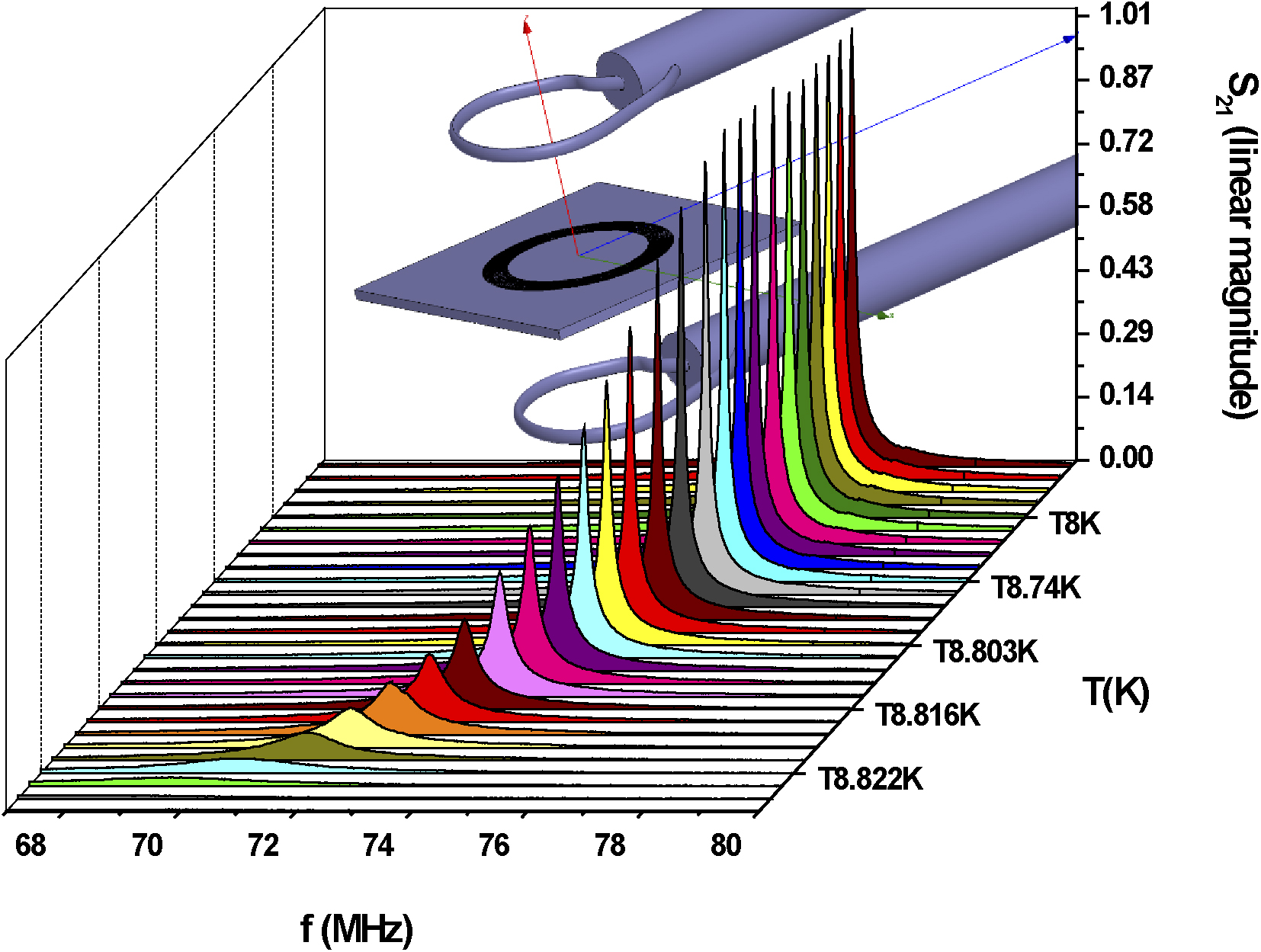 Figure 2. Temperature evolution of transmission coefficient (|S21|, normalized) vs. frequency from a single Nb spiral below its transition temperature. The fundamental resonance is lost when Nb becomes a normal metal (when T = Tc∼8.83K). The cartoon background shows the measurement configuration of the spiral sample between loop antennas for transmission experiments.

The electromagnetic properties of our RF metamaterials can be modulated dynamically using RF power as well. The resonant magnetic properties show a strong nonlinear response with increasing RF input power. Earlier experiments to tune SRRs required incorporation of varactor diodes within the gap of the resonators to create nonlinear media,10 which enhances the losses.

Metamaterials have the potential to make profound changes in many branches of science and technology, particularly in optics and photonics, once a solution is found to material losses. Superconductivity can overcome the loss limitations of ordinary metal metamaterials and create new opportunities for applications. We are now investigating basic optical phenomena arising from the low loss and extreme nonlinearity of our superconducting metamaterials.

This work is supported by the US Office of Naval Research and the Center for Nanophysics and Advanced Materials (CNAM) at the University of Maryland.

Cihan Kurter investigated terahertz emission from intrinsic Josephson junctions in high-temperature superconductors for her PhD work at the Illinois Institute of Technology and Argonne National Lab. She is now a postdoctoral researcher at the University of Maryland investigating RF superconducting metamaterials.