The strongly localized interactions of ultrashort laser pulses with tissue make femtosecond lasers a powerful tool for eye surgery.1,2 These lasers are now routinely used in refractive surgery, while several clinical laser systems also offer options for corneal grafting, a surgical procedure that involves replacing all or part of a pathological cornea (the eye's transparent front section, covering the iris, pupil, and anterior chamber) by donated corneal tissue. Recent studies have also examined the option of performing a surgical procedure in the sclera (the white part of the eye) for the treatment of glaucoma.3

These new forms of laser eye surgery need to take into account the limited tissular transparency. In a pathological cornea, the regular arrangement of the collagen fibrils is perturbed and the tissue's optical properties become strongly scattering (see Figure 1).4,5 Sclera is already strongly scattering in its healthy state. While the exact relation between tissular structure and transparency is subject to debate, it is clear that the intensity of the scattering processes strongly decreases with increasing wavelength. It should therefore be beneficial to use longer wavelengths for laser surgery. Earlier work3 and our own results suggest that a spectral region of relative transparency exists between 1.6 and 1.8μ m, where the scattering cross-section of edematous cornea is about five times smaller than at wavelengths near 1μm, as typically used. 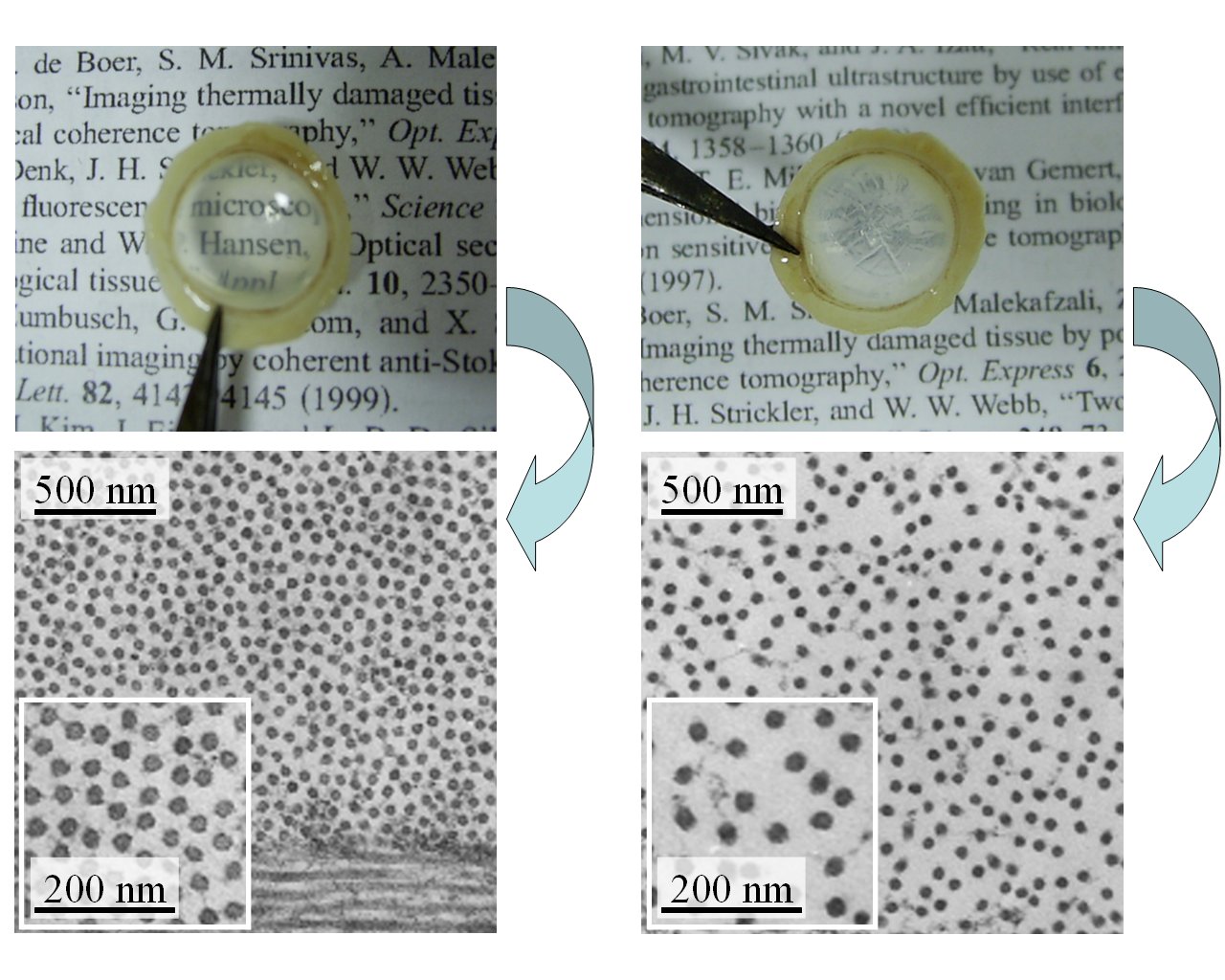 Figure 1. (left) The regular arrangement of the collagen fibrils in the volume of healthy cornea is responsible for its transparency. (right) Most reasons for corneal grafting involve edema (corneal swelling), which perturbs the regular fibril structure and leads to strong optical scattering.

Unfortunately, no laser material is known to directly emit in this wavelength range. Laboratory experiments have been performed with optical parametric amplifiers. Although these devices offer sufficient power and tunability over a broad spectral range, their complexity and the need for strong pump lasers do not permit their use in clinical systems.

Instead, our approach is based on fiber technology. Rare-earth-doped femtosecond fiber lasers offer a promising alternative in terms of efficiency, integrability, and ability to handle high repetition rates. Fiber lasers operating close to 1μm are already used in some existing clinical systems for these reasons. The gain spectrum of erbium-doped fibers is centered at approximately 1.55μm, which is close to the desired wavelength range. However, corneal tissue has a strong absorption peak at approximately 1.45μm, and for longer wavelengths absorption decreases toward a minimum near 1.65μm. Optimum penetration depth for erbium-doped lasers may thus be obtained by shifting the emission wavelength toward the edge of the erbium spectrum in the 1.6μm region. This is not straightforward, as the small signal gain at 1.6μm is approximately five times less than at 1.55μm.

Our system uses a large-mode-area (LMA) erbium-doped fiber. Its nonlinear spectral-phase distortion was used to optimize pulse duration and energy.6 The setup shown in Figure 2 generates 650fs-long 2.2μJ pulses at a repetition rate of 100kHz. This erbium-doped fiber system can be entirely composed of fiber components, except for the final compressor, which needs free-space propagation. This ensures high stability and reliability and a small footprint of presently 90×60cm2, in addition to that of the very compact oscillator, preamplifiers, and pump-diode lasers.

The basis of our system is a sub-100fs all-fiber oscillator with an output spectrum centered at 1576nm, extending to approximately 1610nm (see Figure 2). A bandpass filter allows selection of a 25nm-wide spectrum centered at 1600nm. The pulses are stretched to 600ps over 260m of dispersion-compensating fiber (DCF). Two telecom-based single-mode amplifiers, combined with an acousto-optic modulator, allow pulse amplification of up to 1nJ at 100kHz in an all-fiber-coupled preamplification stage.

The power amplifier is a 12m-long 20μm LMA erbium-doped fiber. The grating compressor is designed to compensate for the second- and third-order dispersion of the DCF fiber. Under 976nm diode pumping, the system generates 1.6μJ, 650fs pulses. Further energy scaling up to 2.2μJ can be achieved without temporal degradation by adding a small amount of 1550nm pump, which controls the amplified spontaneous emission and enhances the signal gain.

Our surgical experiments in edematous corneas using the new wavelengths have confirmed the advantage of longer-wavelength laser sources over laser systems currently used when working in strongly scattering tissue. In addition, the laser source presented here also compares favorably to those systems in terms of compactness and potential cost. Further power scaling will be driven by progress in the manufacturing of the special LMA fibers on which it is based. The availability of this kind of source may lead to a paradigm change in ultrashort-pulse laser surgery of the eye as regards the laser wavelengths used. Further work will address power scaling and implementation of the laser in an integrated demonstrator system, which will be used for further surgical experiments. We are simultaneously working on experimental characterization, and mathematical and numerical modeling of tissular optical properties.

The authors gratefully acknowledge financial support from the French National Research Agency (ANR) through its TecSan program (projects GRECO, ANR-06-TecSan-025, and NOUGAT, ANR-08-TECS-012). The laser presented here is the subject of the PhD project of Franck Morin, which is financed by a scholarship funded jointly by the CNRS and Amplitude Systèmes.

Cord Arnold is a postdoctoral fellow with the Laser/Matter Interaction group.

Valeria Nuzzo currently holds a postdoctoral fellowship at the School of Engineering and Applied Physics of Harvard University, where she works on gene transfer and nanosurgery by femtosecond-laser pulses.

Florent Aptel is an ophthalmic surgeon.

Frédéric Druon, Patrick Georges, Marc Hanna, and Franck Morin are laser physicists specializing in diode-pumped ultrafast solid-state lasers and their applications. They have published numerous papers and hold several patents in this field. The fiber laser presented here has been developed as part of Franck Morin's PhD project, which is approaching completion.

Jean-Marc Legeais is an ophthalmic surgeon and also holds a professorial post at Paris Descartes University.

Michèle Savoldelly is a laboratory technician specializing in transmission-electron microscopy.