As demand for communication networks rises, it is becoming increasingly important to develop low-cost, reliable high-speed connections. Optical fiber links have long been preferred to electrical cables over long distances. With increasing demand for bandwidth, they are also replacing copper wire over shorter ranges. For short-distance, multimode fiber-based data-communication (datacom) networks, the laser source of choice is an 850nm gallium arsenide (GaAs) vertical-cavity surface-emitting laser (VCSEL) because of its high-speed capability, low cost, and low power consumption. However, currently available VCSELs cannot achieve the single-channel bit rates (at and beyond 10–20Gbit/s) required for future datacom networks and consumer applications, for instance in upcoming universal-serial-bus standards and high-definition video links.

It has commonly been assumed that, as modulation bandwidth is greater for smaller components, VCSELs would need to be scaled down to reach higher speeds. However, smaller devices mean higher current densities, but these compromise reliability.1 Recently developed high-speed VCSELs2,3 can achieve speeds of up to 40Gbit/s but operate at high current densities and at wavelengths of 980nm and 1.1μm. These are outside the range of short-reach datacom standards and incompatible with high-speed multimode fiber. We have brought the inherent advantages of these longer-wavelength light sources down to the standard 850nm wavelength by considering and minimizing speed-limiting effects and optimizing the design.

A standard VCSEL contains an active gain region sandwiched between two highly reflective mirrors consisting of layers of materials with alternating high and low refractive indices, known as distributed Bragg reflectors (DBRs). This design results in an effective cavity length of typically only 1–3 wavelengths long, which makes the VCSEL a very small device with advantages in terms of low operating currents, low power consumption, and high modulation bandwidth at low currents. However, the DBRs also need to carry electrical current through the device and the large number of layers leads to high electrical resistance and problems such as self-heating at high currents. These problems become more pronounced as the size of the device is reduced. We have increased the differential gain of the active region and the thermal conductivity of the bottom DBR to improve the high-speed properties of 850nm VCSELs while maintaining a low operating current density for high reliability.4

We included 10% indium in the gain region's quantum wells (QWs) and maintained emission at 850nm by reducing the QW thickness and modifying barriers. As a result, we doubled the differential gain compared to the GaAs QWs traditionally employed in 850nm VCSELs. As the resonance frequency is proportional to the square root of the differential gain, this significantly improved high-speed performance.5 We also incorporated aluminum arsenide (AlAs) layers as the low-index material in the bottom DBR, considerably increasing the thermal conductivity compared to using traditional AlGaAs. Thermal management is important because the resonance frequency increases with the square root of the current, i.e., the VCSEL needs to be operated at high currents to reach high speeds. A high resistance leads to a temperature increase and performance degradation. Effective heat transport away from the active region is therefore essential.

In addition to thermal and intrinsic speed limitations, it is important to address parasitic effects from the resistances and capacitances associated with the device structure and geometry, which effectively form a low-pass resistor/capacitor filter and limit performance at high modulation frequencies. One of the major contributions to parasitic capacitance comes from the oxide aperture, a thin layer of selectively oxidized AlGaAs confining both the electrical current and the optical field. We used a double- rather than single-layered large-diameter oxide aperture to reduce the oxide capacitance by almost half. Figure 1 shows a schematic view of our VCSEL structure.

Figure 1. Schematic view of our VCSEL structure optimized for high speed (not drawn to scale: the widest point is 50μm and the height is 7μm). The current path from top to bottom contact is defined by the insulating, selectively oxidized aluminum GaAs layers (black) which form an ‘oxide aperture.’ This also provides transverse confinement of the optical field. The laser resonator is formed by distributed Bragg reflectors (DBRs) on both sides of the gain region containing the quantum wells.

Despite a large aperture diameter of 9μm, we reached a maximum 3dB bandwidth of 20GHz. Closer analysis of the small signal response revealed that the performance was limited primarily by electrical parasitics and secondly by thermal effects.4 The high bandwidth and large aperture allowed for successful data transmission at very high data rates. Eye diagrams and bit-error rates (BER) for transmission over 100 and 50m multimode fiber at 25 and 32Gbit/s, respectively, are displayed in Figures 2 and 3.6 We used eye diagrams to examine the shape of the optical waveform generated by modulating the VCSEL with an electrical data signal. An oscilloscope displayed an overlay of the data pattern received, forming the characteristic eye pattern shown in Figure 2. The clear, open eye is a good indicator of high signal quality and that error-free data transmission will be possible. BER is the fundamental measure of the performance of a digital data link. It is defined as the probability of incorrect identification of a bit by the receiver's decision circuit. In our experiments, error-free transmission (defined as BER <10−12) was achieved at both bit rates while biasing the VCSEL at 11kA/cm2 (the current density used in today's 10Gbit/s devices). 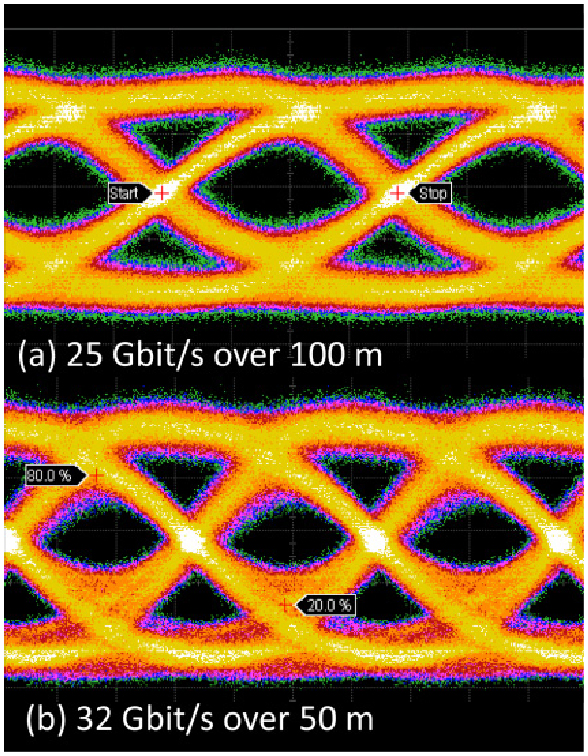 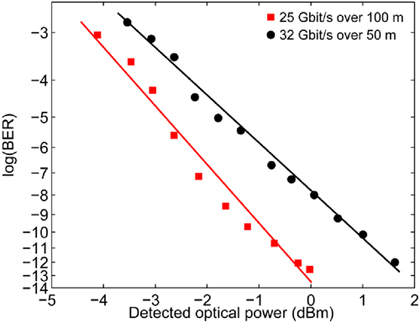 A new generation of 850nm VCSELs capable of transmitting data at high rates without sacrificing reliability is needed to meet near-future demands on data communication. So far, our results have demonstrated error-free transmission at data rates of up to 32Gbit/s while operating at low current densities. Our next step will be to reduce the thermal effects and electrical parasitics that currently limit performance.