Guiding daylight into a building for energy-saving illumination

The building industry is among the largest consumers of fossil energy today, and therefore seriously in need of innovative and nonpolluting lighting technologies. For the up-and-coming generation of architects who are conscious of the importance of renewable energy, conservation is a clear priority. The structural and power needs of an edifice point the way to suitable environmental-design strategies. One such idea—guiding sunlight into a building—is not new. Daylighting systems promise a significant reduction in power consumption and greenhouse emissions. Other advantages of the technology include low maintenance costs, high visual quality, and related psychological factors. To date, however, this solution has been difficult to implement effectively. The biggest barriers to reliable performance are the temporally and spatially changeable characteristics of the energy source. The Active Daylighting System (ADASY®), developed by us and others in the context of a European initiative, addresses these limitations through an innovative collection-and-extraction system that minimizes lighting fluctuations without substantial loss of efficiency.

ADASY offers static illumination integrated into a building's façade. It consists of a horizontal structure inside the building core along a false ceiling. ADASY comprises a collection system, a light guide, and a system of daylight-extract luminaires (points of light): see Figure 1. ADASY's extractor system provides several degrees of freedom, making the structure more flexible and tunable to environmental conditions and performance requirements than previous natural-light-based approaches. 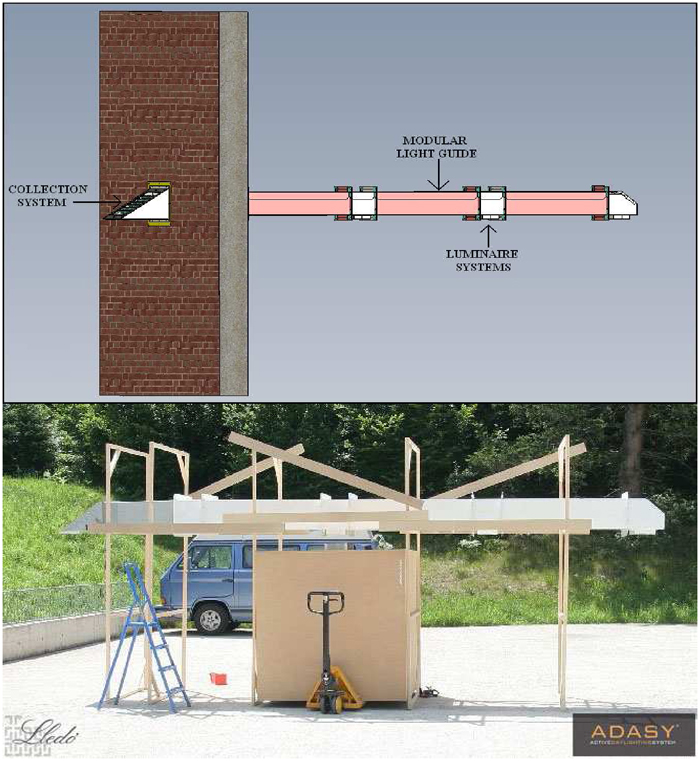 Two tasks are basic to any daylight-illumination system for proper performance. First, the system must collect sunlight and distribute it through the building. The collection system is also responsible for redirecting sunlight inside the distribution system (light guide and luminaires) with an appropriate output angle to reduce reflection losses and achieve maximum efficiency. To minimize the angle of the output light, we chose a compound parabolic concentrator (CPC)-based geometry for the design of the collector system. Making a sloped cut in the geometry of the entry surface (called CPC truncation, T-CPC) both increases the energy gathered monthly and yearly and—following an initial optimization step—also allows us to design an array of T-CPCs working together (see Figures 2 and 3).

The sunlight collected by the capture system is distributed through the light guide and ultimately driven out of it through the luminaires. Because sunlight is led through the guide by reflection, a highly reflective material must be present in the internal surfaces of the guide. In contrast, the collection system and extract luminaires have a lower reflective index because of fabrication restrictions related to cost, precision requirements, and external environmental factors such as dust and humidity.

To alleviate the so-called hot-spot problem (concentrated high-flux-density areas), a range of diffuse materials are placed at the entrance of the light guide. Consequently, the sunlight that falls directly onto the guide (without interacting with the collection system) is dispersed by the diffuser material, thereby minimizing energy concentration (see Figure 4). 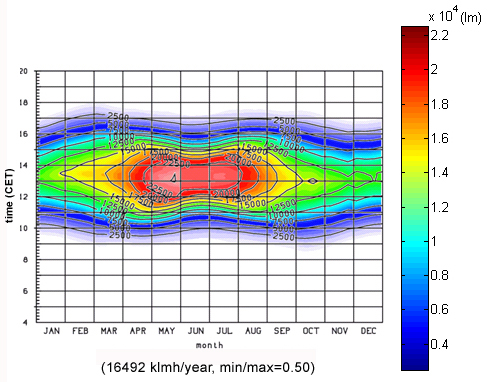 We ran simulations of a faithful reproduction of the ADASY system using TracePro ray-trace software. Results were obtained at a measurement plane located 1.85m away from the light guide. We made a special effort to increase the number of rays traced in each simulation, reaching several millions by dividing the surface source into numerous parts and executing a single simulation per source division. Analysis of the results showed the lighting generally to be both efficient (300–400lx during mid-day working hours) and uniform (see Figure 5). Although the diffuser materials attenuate the hot-spot effect, it is still responsible for the highest flux levels measured in the analysis plane. In addition, although glare control was taken into account in developing the final ADASY configuration, standard estimates are not really appropriate for testing daylight systems, which have a higher level of glare. We believe users will tolerate it because of the unconventional nature of the office lighting system. Nevertheless, we are developing special low-glare luminaires.

In summary, ADASY is an effective daylighting system for capturing light from a façade, which can then be used to illuminate office buildings during a roughly 8h work period. The cost-effective components of the system and its adaptable features make ADASY a practical, low-maintenance daylight solution that can easily be integrated into nonresidential buildings. ADASY can help architects to reduce electrical illumination loads. Moreover, the system's high-quality light has a notably beneficial influence on people, which is a substantial advantage.

Future work on ADASY and new lines of investigation will aim at improving the system's flux distribution and global efficiency, reducing hot spots, and obtaining, insofar as possible, an environment-independent system.1–4

ADASY is a European EUREKA 3575 project led by the Lledó Group that is partially supported by the Centre for Industrial Technology Development and the Institute for the Development of Madrid Region, both in Spain. The University Complutense of Madrid, Universidad Politcnica de Madrid, and Bartenbach Lichtlabor have contributed to the optical design of ADASY. The Lledó Group plans to commercialize the ADASY product in future.

Daniel Vázquez began his career as a drawing specialist after studying technical architecture. Today, he is a PhD architect at the Universidad Politécnica de Madrid. Since 1988, he has been teaching in the Optics Department of UCM, where he was made professor in 2002. He works in developing lighting systems for several fields, including natural and LED lighting devices, signaling, LED panels, and solar energy. He has published 25 papers and holds nine patents in these fields.

Antonio Álvarez Fernández-Balbuena received his BS in optics from UCM, and was subsequently awarded a two-year grant by the Comunidad de Madrid to carry out research in UCM's Faculty of Physics. Since 2000, he has been working in the Optics Department on several projects, leading to publications in the area of concentrator design, natural lighting, and LED signalization. In 2008 he earned an MS in technical optics from UCM.

Mario González Montes received his BS in physics from the University of Oviedo, and subsequently completed additional studies in electronic engineering at UCM. Since 2006, he has been working as researcher in UCM's Optics Department. At present he is a PhD candidate in systems engineering.

Eusebio Bernabeu received his MSc (1966) and PhD (1969) from the University of Zaragoza, both with honors. He is a professor in the Physics Faculty of UCM, where he has been director of the Optics Department (1983–2002) and a member of the Governing Board (1990–2002). He has also worked at École Normale Supérieure and Laboratoire de l'Horloge Atomique (in the group of Alfred Kastler) in Paris.

Angel García-Botella is an associate professor. He received his MSc (1995) and PhD (2000) from UCM. He is the author of 12 international papers in different fields of optics, and three patents. His research work comprises the design of lighting systems applied to the fields of natural and LED lighting devices, signaling, LED panels, and solar energy.

Lucas García-Rodríguez received his BS in physics from the Universidad Autnoma de Madrid and a BS in electronic engineering from UCM. He is currently a PhD candidate. He worked in the telecommunications industry with Vodafone and the Abengoa Group and as a researcher in the Optical Group at UCM. He directs the Optics Department at Lledóo, where he develops innovative optical systems. He has seven patents in LEDs and lighting.