In electronics, electrons control the flow of other electrons in transistors, which in turn enables switching and memory elements like flipflops. Modern optical-communication networks demand many parallel channels and switching and routing of information between them. Ideally, in future high-speed and high-capacity systems this would be done in an all-optical way, as converting between electronic signals and light pulses can slow down communications and waste energy as heat. Hence, one of the thrusts of photonics, i.e., the science and technology of generation and application of light, is to control light with light.

To some extent, this is possible using arrays of ‘hard-wired’ microfabricated laser emitters, but these are inflexible. We have modified a broad-area semiconductor laser so that different regions of the lasing cavity can be turned on and off independently using pulses of light.

Each of these regions represents a small individual laser (smaller than 10μm in width), a microlaser, within the much broader pumped aperture (see Figure 1). It holds itself together as a stable self-localized structure instead of spreading and decaying like ripples on a pond. We have built a ‘cavity-soliton laser’ (CSL), based on these so-called spatial solitons, a concept well-known in nonlinear science.1–3 Each soliton can be individually set and reset like an electronic or magnetic memory bit. Crucially, they can also can be relocated under external control. Ideally, many of them can be addressed in parallel anywhere within the active area.3 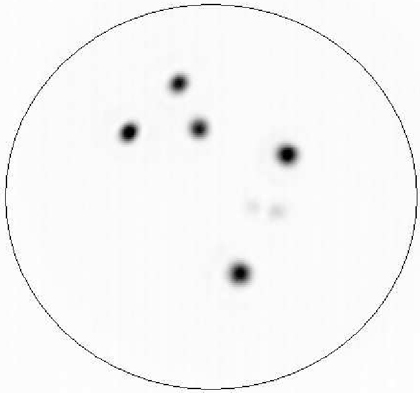 The CSL is based on a special type of semiconductor laser, a 980nm vertical-cavity surface-emitting laser (VCSEL), with a large transverse aperture (200μm).1,4,5 The experimental setup is shown in Figure 2. We imaged the active area of the VCSEL with a telescope onto a frequency-selective element, e.g., a volume Bragg grating, using an external cavity and kept the VCSEL current sufficiently low that lasing required feedback from the external cavity. The light inside the resonator organized itself into solitonic structures with the right shape, frequency, and amplitude to be self-sustaining. Ramping the current up and down, we saw the spontaneous appearance of microlasers, small bright spots (see Figure 1 and also the online video6), which are bistable, i.e., they can be on or off for the same current value as indicated by the two amplitude levels detected (the horizontal lines in Figure 3). Within their bistable range, we found that they could be switched on and off by an external control beam. Figure 4 illustrates the independent control of all 23 = 8 bit configurations of three solitons. 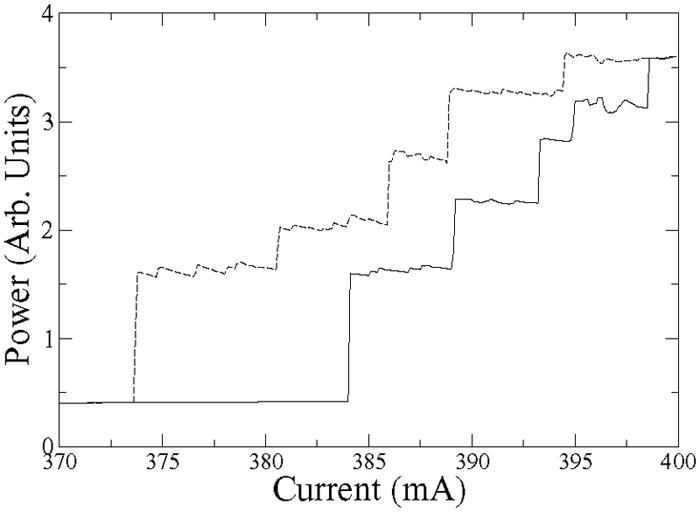 Figure 4. Sequence of pictures showing what happens when we shine a control laser (indicated by the arrows) on (or close to) three locations supporting solitons. The solitons remain even after the control laser is turned off.

These results are in good agreement with a theoretical description of the optical field and carrier density within the VCSEL in the presence of feedback,7 which will be useful for future device design. Spatial nonuniformities of the background and the lasing material limit the areas within the aperture where solitons exist and are controllable. One manifestation of that is that the microlasers can be turned off by aiming slightly to the side of a soliton (see panels 7, 9, 13, and 15 in Figure 4).

The microlasers' bistability, parallelism, and mobility make them attractive for all-optical information-processing applications, e.g., in all-optical delay lines as buffering elements in optical networks.4,8 Each soliton has a laser's freedom to choose polarization, phase, and frequency, but can do so individually. This offers exciting new opportunities for fundamental studies and potentially for applications. We are currently studying polarization phenomena5 and phase locking between solitons. Elimination of growth-induced nonuniformities is one of the key challenges in cavity-soliton technology, as is operation at telecommunications wavelengths.

In summary, we have developed a semiconductor-based ‘cavity-soliton laser’ by applying the fundamental concept of a spatial soliton to a semiconductor laser, creating small microlasers that can be turned on and off by pulses of light. We also find that the emission amplitude of these microlasers is not necessarily constant but can be pulsed. A soliton operating in short-pulse mode would be a 3D soliton or ‘light bullet,’ an as yet elusive nonlinear optical phenomenon in spite of intense experimental and theoretical investigations. This would be of great interest because it would not spread in any dimension, as light normally does. Generating light bullets in a controlled way, while maintaining the bistability and flexibility inherent in our CSL approach, is a particularly intriguing prospect.

We are grateful for support from the European Union Specific Targeted Research or Innovation project 004868 ‘Fundamentals, Functionalities, and Applications of Cavity Solitons’ (FunFACS), the Deutsche Forschungsgemeinschaft, and also for fruitful input from FunFACS partners and other colleagues. The excellent VCSEL structures were supplied by the Philips Technologie GmbH subsidiary U-L-M Photonics.

Thorsten Ackemann is a reader in the photonics group of the Department of Physics, which he joined in 2005. He received his PhD in physics in 1996 from the University of Münster (Germany). His current research interests include several aspects of nonlinear photonics, semiconductor lasers, and solitons.

Neal Radwell received a Bsc (Hons) in mathematics and physics in 2006 from the University of Strathclyde. He is now studying towards his PhD, working on cavity solitons in semiconductor lasers.

Gian-Luca Oppo has been professor of computational and nonlinear optics since 1998, after joining Strathclyde in 1989. He completed his studies at the Institute of Optics in Florence (Italy) and has been a researcher at the Universities of Toronto (Canada), Drexel, and Nice (France). His work focuses on complexity in nonlinear optics, control of spatial structures, and simulation of photonic systems.

William J. Firth is a professor and former head of the Department of Physics, which he joined in 1985. He received his PhD in 1973 from Heriot-Watt University (UK). His current research interests mainly relate to theoretical aspects of cavity-soliton lasers and self-organization.