Optical coherence tomography (OCT) is a standard tool for detailed two- and three-dimensional noninvasive analysis of retinal diseases in ophthalmology. It is also a promising research instrument, permitting early tumor diagnosis in skin and bladder tissue. OCT provides high-resolution images of biological tissue using the interference between incident and returning (reflected or backscattered) light1 to obtain structural information that can be used to distinguish between a skin tumor and healthy skin. A particularly important use is to distinguish benign and malignant tumors by means of ‘basement membrane invasion.’ If the tumor has spread beyond the epithelium (outer layer) of a structure in the body through the basement membrane (middle layer), and is intruding into the underlying connective tissue, it must be cut out. However, the structural contrast is not always sufficient to result in a meaningful diagnosis.

So-called exogenous contrast agents are frequently used to increase the structural contrast in OCT images. Microspheres, nanoshells, nanorods, microbubbles, or other contrast agents are inserted into the tissue and increase the image intensity within specific regions of interest.2 They are, however, difficult to administer and possibly toxic, and so different approaches are needed.3 A common alternative to contrast agents relies on analyzing the frequency dependence of backscattered light. This can improve differentiation of tissue structures, but this ‘spectroscopic-OCT’ method requires computationally expensive time-frequency analysis,3 making it too slow for significant use with patients. Furthermore, this technique analyzes the wavelength dependence of the sample only within one distinct spectral regime.

Higher wavelength dependences can be exploited by simultaneously imaging in two bands4 and using color to represent the difference between the two resulting images. This is computationally inexpensive and this method of generating contrast is fast enough for real-time in vivo imaging. Although we (and others) have demonstrated high-resolution time-domain systems,5,6 the imaging rate in the axial direction, essential for classifying tumor invasion, is strongly limited by mechanical scanning. To overcome these limitations, we have developed a new approach that detects the interference pattern across the spectrum.7 We perform spectral-domain OCT to reconstruct the intensity dependence on depth for both wavelength bands by analyzing the interferometric signal within two spectrometers. This allows in vivo imaging with outstanding spectroscopic contrast. 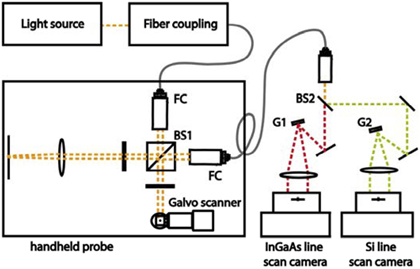 We used a commercial supercontinuum light source (Fianium SC-450-2) within a fiber-based spectral-domain OCT system (see Figure 1), permitting us to cover two broad bands centered at 740 and 1300nm, and achieving axial resolutions of 2.6 and 4.9μm, respectively.8 The source light is coupled into a compact probe head, implementing a dispersion-balanced Michelson interferometer. The recombined light of the reference and sample arms is guided to the spectrometers. A dichroic beamsplitter spatially separates the two bands. Two line-scan camera-based spectrometers detect both, while a control PC renders the two images in real time. 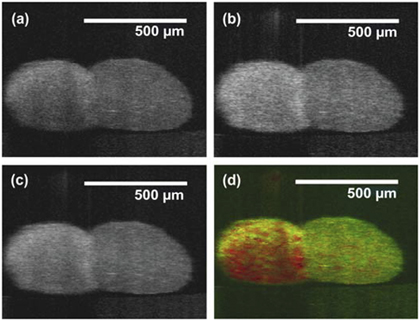 As a first step, we imaged a spheroid co-culture consisting of fibroblasts (left) and RT4 tumor cells (right) using an existing time-domain system.5 The co-culture models the boundary between a tumor and healthy connective tissue (fibroblasts), and was imaged to characterize the spectroscopic contrast between different tissue types. Figures 2(a) and (b) show the spheroid co-culture for 840 and 1230nm center wavelength, respectively. A clear differentiation of both cell lines based on OCT-signal amplitude is observable in Figure 2(b) only. Figure 2(c) presents an intensity-averaged image and Figure 2(d) shows the intensity difference between both wavelength bands, enabling clear differentiation of the two cell lines.

To demonstrate the performance of simultaneous dual-band OCT for living tissue, we used our system to image a living human nail fold, where the nail plate (the flat part of the nail) emerges from beneath the cuticle.8 Figures 3(a) and (b) represent the OCT images measured at 740 and 1300nm center wavelength, respectively. Both images clearly show the nail plate, dermis, and blood vessels, as well as the basement membrane, separating epidermal from dermal layers. Figures 3(c) and (d) show the intensity-averaged image and color-encoded images, respectively. The epidermis is colored green and red, in contrast to the dermal layers colored blue. In deeper regions, the dermis shades to red because of higher scattering and absorption in tissue of the 740nm wavelength band.

Comparing Figures 2 and 3 reveals that the color contrast originates in either one band or the other. As a result, independent of the sample, two wavelength bands are necessary to observe contrast between different tissue types. In terms of imaging speed, only the spectral-domain technique is suitable for high-resolution in vivo imaging, achieving 2–4 frames per second, sufficient for 2D imaging. Higher imaging speeds can be expected if faster line-scan cameras are used.9

Simultaneous dual-band spectral-domain OCT allows in vivo functional imaging with outstanding spectroscopic contrast. Due to the low computational effort and fiber-based realization, the imaging method can be performed in real time in clinical environments. The additional spectroscopic information supports the classification of different tissue types. However, the origins of this contrasting mechanism have to be carefully investigated and research continues into the application of this new technique to in vivo tumor diagnostics. We are currently comparing images of clinically significant samples obtained with our new system, with standard histological cross-sections to analyze the benefits of the additional spectroscopic information for diagnostic purposes and relate them to structural information.

We gratefully acknowledge scientific contributions by B. Hermes, J. Bornemann, A. Naami, and D. Höller Obrigkeit. This work was funded by the Deutsche Forschungsgemeinschaft, grant Fo 505/2-1.

Stefan Kray graduated in computer engineering from the University of Siegen (Germany) in 2004. He is currently working towards his PhD, specifically focusing on simultaneous dual-band OCT and nonmechanical approaches for time-domain OCT.

Felix Spöler received a diploma degree in physical chemistry from the University of Würzburg (Germany) in 2001 and a PhD from RWTH Aachen University in 2009. His current research focuses on OCT implementation in medical diagnostics and biotechnology.

Heinrich Kurz is head of the IHT and founder of AMO GmbH, a nonprofit organization to promote science and technology from university research into industrial applications. His main research activities include silicon- and carbon-based nanoelectronics, nonlinear optics, photovoltaics, femtosecond-laser interactions, spectroscopy, and application of lasers in electrical engineering, material science, and biomedical science.