A proposed model for migrating birds' magnetic sense can withstand moderate orientational disorder of a key protein in the eye.
23 September 2009
Ilia A. Solov'yov and Klaus Schulten

Creatures as varied as salmon, honeybees, and migratory birds such as European robins have an intriguing ‘sixth’ sense that allows them to distinguish north from south.1–4 Yet despite decades of study, the physical basis of this magnetic sense remains elusive. Detailed understanding of magnetoreception in animals has tremendous applications. For example, it is well known that windmills constructed in the wrong places, especially older ones, cause many bird deaths. Shielding these structures with magnetic fields may reduce the death toll by keeping the animals away from the dangerous area. Similar shields could be used to protect airports from birds, as they regularly collide with airborne airplanes, causing severe problems. Damage by birds and other wildlife striking aircraft annually amounts to well over $600 million for US civil and military aviation and over 219 people have been killed worldwide as a result of wildlife strikes since 1988.5

Migratory birds' magnetic sense may be based on the protein cryptochrome, found in the retina, the light-sensitive part of the eyes. Cryptochrome's functional capabilities depend on its orientation in an external magnetic field.6,7 But it is present in both bird and human eyes, so why do humans lack birds' navigational ability? Our recent reports6–8 offer an intriguing answer. In sensing the earth's magnetic field, cryptochrome relies on redox reactions, which exchange electrons between molecules. Such reactions are crucial for life, but can also be damaging. Antioxidants to keep them in check are produced and used naturally in the body and marketed commercially in pharmacology and as dietary supplements. For magnetoreception, cryptochrome requires small quantities of negatively charged molecular oxygen, superoxide (O2−). It is fortunate that only low doses are needed, because superoxide is toxic, despite being used elsewhere in the body for signaling. Humans have an extremely efficient antioxidant enzyme, superoxide dismutase, that keeps superoxide at a very low concentration level, apparently too low for human cryptochromes to use. It seems that somewhere in our evolutionary history we might have traded our magnetic sense for longevity. 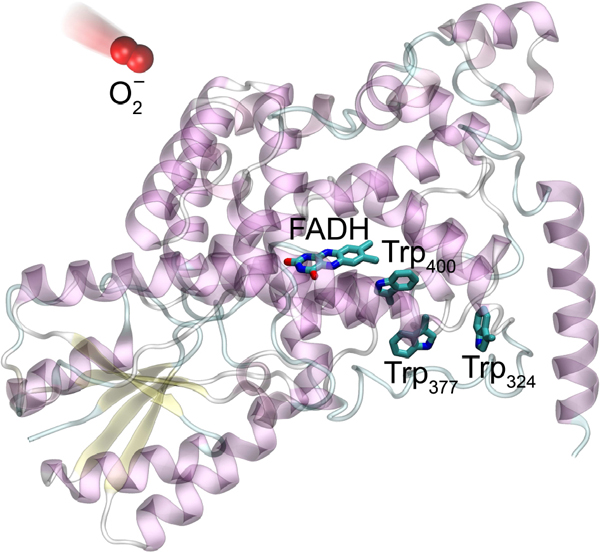 Figure 1. Structure of cryptochrome, likely involved in avian magnetoreception. The protein internally binds the FADH (the semi-reduced form of flavin adenine dinucleotide) cofactor, which governs its functioning capabilities. The signaling state is achieved through a light-induced electron-transfer reaction involving a chain of three tryptophan amino acids, Trp400, Trp377, and Trp324. Signaling is terminated by the superoxide radical O2- .

Researchers have speculated that the products of such reactions in a bird's retina might somehow affect the sensitivity of light receptors.9 If so, then modulation of the reaction products would alter the bird's visual sense, producing marks in the its field of view. The bird could find its direction by changing the orientation of its head in the magnetic field and observing how the marks moved across its vision.9 Interestingly, studies have shown that, when using the magnetic field to orient themselves, migratory birds indeed exhibit such head-scanning behavior.10 Cryptochrome-signaling intensity is expected to change by about 15% upon a 90° turn of the protein in the field.7 Visual signals can also be enhanced and it is likely that cryptochrome is distributed similarly to photoreceptor cells,9,11 perpendicularly to the retina. The cryptochromes are unlikely perfectly aligned, even if bound to the ordered membrane structures found in the outer segments of rod-shaped photoreceptors. We calculated how much disorder is permitted in the cryptochrome alignment for a functional magnetic compass.

Cryptochrome internally binds a flavin adenine dinucleotide (FAD) molecule. On activation by light-induced electron transfer6 involving a chain of three tryptophan amino acids, FAD gains hydrogen to form the active (signaling) state FADH. The magnetic field can influence this photoactivation process by acting on unpaired-electron spins.6,7 The back reaction, in which FADH reverts to FAD, likely involves O2− (see Figure 1) and can also be modulated by the earth's magnetic field.7 Cryptochrome's signaling state has a lifetime of about 1ms, controlled by the balance of the forward- and back-reaction rates. A low concentration of O2− is crucial for a sufficiently long signaling-state lifetime, in the 1–10ms range.12 At a concentration still tolerable to an animal, encounters of FADH and O2− radicals happen every millisecond, which is optimal for compass function. 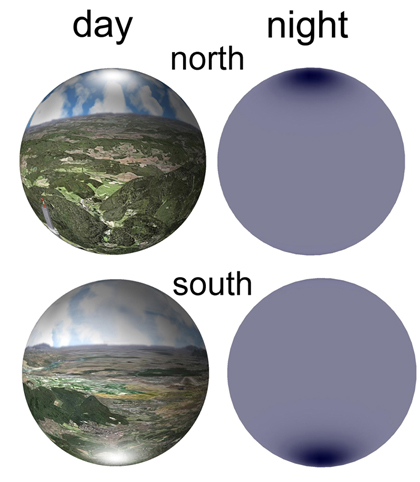 Figure 2. Visual patterns in the retina modulated through the geomagnetic field for a bird flying at night and during daytime parallel to the horizon toward north and south.
Acuity of vision-based compass

The acuity of this proposed vision-based magnetoreception system in birds is affected by the degree of order in the orientation of the cryptochrome proteins. Cryptochrome possesses a magnetic-field-sensing anisotropy axis6,7,13 that is roughly perpendicular to the FAD plane (see Figure 1). The protein's orientation with respect to the magnetic field can be characterized by the three Euler angles α, β, and γ. Euler angles represent the spatial orientation of any frame of reference as a composition of rotations from a frame of reference. We use a generic definition.14 Our calculations showed that α and γ do not need to be held fixed for cryptochrome to act as a magnetic compass. The angle βis not required to be fixed precisely either. We investigated how sensitive compass acuity is to a range of β values.

Figure 2 shows the visual patterns in the retina modulated in some hypothetical manner through the geomagnetic field for a bird flying parallel to the horizon and facing either north or south. The modulated patterns are calculated for cryptochrome fluctuation over a range in β of 0–10°. The size and intensity of this pattern defines the acuity of the magnetic compass. In both examples (day and night vision), one distinguishes a round spot in the lower part of the retina, which points in the direction of the magnetic field. This spot is clearly visible despite a Δβ≃10° fluctuation. The uniform background of the night-vision magnetic-field-induced pattern makes it easier to distinguish the pattern of more intense color at the top and bottom of the field of vision for the north- and south-facing flights, respectively.

A biochemical magnetic compass in birds may consist of orientationally ordered proteins in the retina. Previous work has shown how such a compass could be realized through light-induced electron-transfer reactions in cryptochrome. We have now modeled the effect of orientational disorder of the protein in retinal cells on compass acuity. We found that moderate alignment of cryptochromes is sufficient for a reliable vision-based magnetoreception system. Our next step is to connect the angular sensitivity of the vision-based magnetic compass quantitatively to the pattern in a bird's field of vision. We want to understand in precisely which part of the photoreceptor cell cryptochrome is expressed and how it is connected to the cell membrane. Coupling of cryptochrome to visual transduction is also still hypothetical and subject to further investigation.

This work has been supported by the Stiftung Polytechnische Gesellschaft Frankfurt am Main as well as by National Science Foundation grants MCB-0744057 and PHY0822613.

Ilia Solov'yov received his PhD from Frankfurt am Main University in 2006. He is a postdoctoral research associate. His current research focuses on magnetoreception mechanisms in living organisms and development of theoretical and computational methods for application to biomolecular and nanostructured systems.